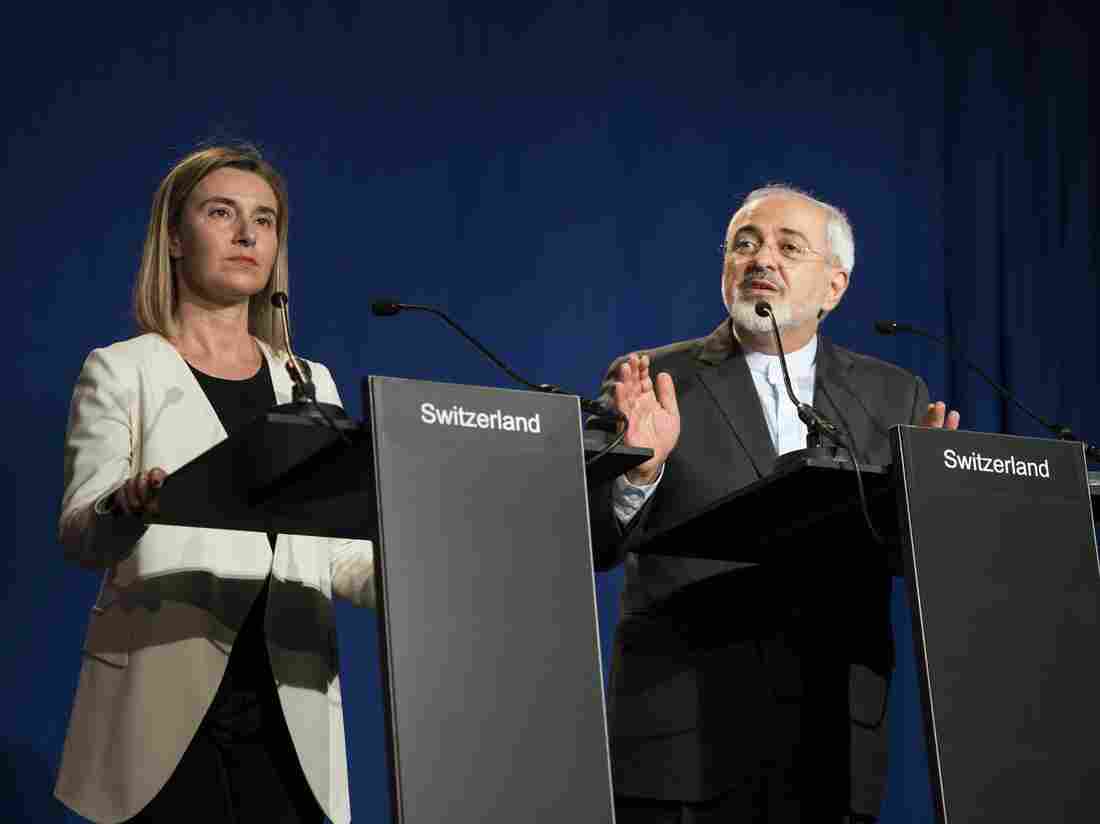 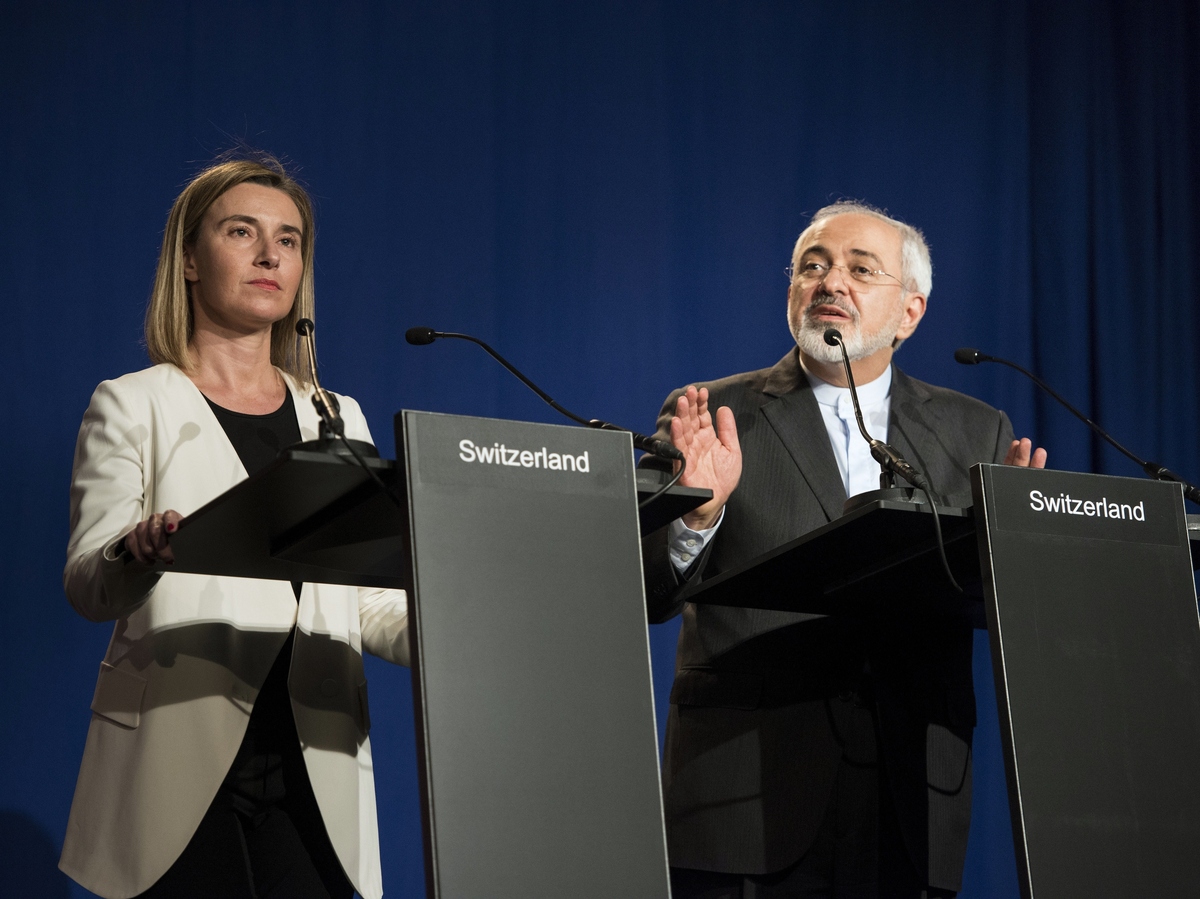 After a process that has tested international alliances and divided politicians at home, President Obama said that Iran and six world powers had come to a preliminary understanding about Iran's nuclear program. The framework agreement was reached after years of multilateral negotiations.

Since the Iranian Revolution in 1979, the issue has alienated Iran and vexed Western powers. Obama made reaching an agreement with Iran a priority of his administration and began bilateral talks with Iran in secret years ago.

Obama said that if fully implemented, the deal outlined today would prevent Iran "from obtaining a nuclear weapon."

It's no secret, Obama said, that the United States and Israel disagree on this deal, but Obama said a diplomatic solution like the one reached today is "the best option."

"A diplomatic solution is the best way to get this done and offers a more comprehensive and lasting solution," Obama said.

Reading a statement agreed to by all parties, Federica Mogherini, of the European Union, said Thursday that all sides had "taken a decisive step" and reached an agreement that would curb some of Iran's nuclear programs, allow for more international inspections and lift some sanctions imposed by the United States and the European Union on Iran. The agreement allows Iran to continue some enrichment of uranium at only one site and turns Fordow, a contentious underground nuclear facility, into a "nuclear physics and technology center."

Obama said the deal means that Iran will no longer be able to enrich weapons-grade plutonium and uranium.

Mogherini said that Iran had agreed to use its nuclear program for peaceful means only.

"We can now restart drafting the text for" a comprehensive plan of action, Mogherini said. The deadline for that plan of action is June 30.

Before the statement, Iranian President Hassan Rouhani had tweeted that Iran and six world powers — the U.S., Russia, France, China, Britain and Germany — had reached an agreement on "key parameters" of the issue.

Secretary of State John Kerry followed with a tweet of his own saying: "Big day: #EU, P5+1, and #Iran now have parameters to resolve major issues on nuclear program. Back to work soon on a final deal."

The new plan comes after Kerry and Zarif engaged in talks that continued until nearly 6 a.m. local time in Lausanne, Switzerland, on Wednesday. The sides had previously agreed that the talks were supposed to have culminated with a framework deal two days ago.

For a while, it seemed negotiators were close to announcing a deal, with Russian Foreign Minister Sergei Lavrov saying that a general agreement on "all key aspects" had been reached.

But the talks bogged down and three ministers left the hotel that has served as the venue for this round of negotiations.

"We have a very serious problem of confidence — mutual lack of confidence, which we need to address," Zarif told reporters earlier today. "And we hope that this process will remedy some of that."

Obama closed his statement by trying to set expectations saying that an agreement has not yet been signed.

"Our work is not yet done and success is not guaranteed, but we have a historic opportunity to prevent the spread of nuclear weapons in Iran and to do it peacefully," Obama said. "We should seize the opportunity."

According to a White House readout of the call, Obama told Netanyahu that "the framework represents significant progress towards a lasting, comprehensive solution that cuts off all of Iran's pathways to a bomb and verifiably ensures the peaceful nature of Iran's nuclear program going forward."

According to Netanyahu's office, the prime minister disagreed, saying that a "deal based on this framework would threaten the survival of Israel."

Speaker John Boehner, a Republican from Ohio, issued a statement saying the parameters for the deal released today "represent an alarming departure from the White House's initial goals."

"My longtime concerns about the parameters of this potential agreement remain, but my immediate concern is the administration signaling it will provide near-term sanctions relief," Boehner said. "Congress must be allowed to fully review the details of any agreement before any sanctions are lifted."

The Jerusalem Post reports that Israeli leaders did not react to the outline of the deal with the same enthusiasm that it was received in Western capitals.

According to the Post International Relations Minister Yuval Steinitz said "Iran refused to make any concession on the nuclear issue and continues to threaten Israel and all other countries in the Middle East."

"Even before the press conference in Lausanne where the announcement was made, the Prime Minister's Office posted the following message on twitter: 'Any deal must significantly roll back Iran's nuclear capabilities and stop its terrorism and aggression.'

"The tweet was posted above a map with arrows leading from Tehran to Yemen, Gaza, Israel, Lebanon, Syria and Iraq under the headline, 'Iran's aggression during the nuclear negotiations.'

"Government officials made clear that Israel will continue publicly fighting against the deal, emphasizing Iran's aggressive behavior throughout the Middle East even at a time when it does not yet have nuclear capabilities."

The White House has issued this fact sheet about the framework agreement: