Accessibility links
Sailor, Missing For 66 Days, Rescued Off Cape Hatteras By Passing Ship : The Two-Way Louis Jordan, who sailed out of a small marina in South Carolina in late January, had not been heard from until Thursday. That's when he was spotted on the upturned hull of his sailboat. 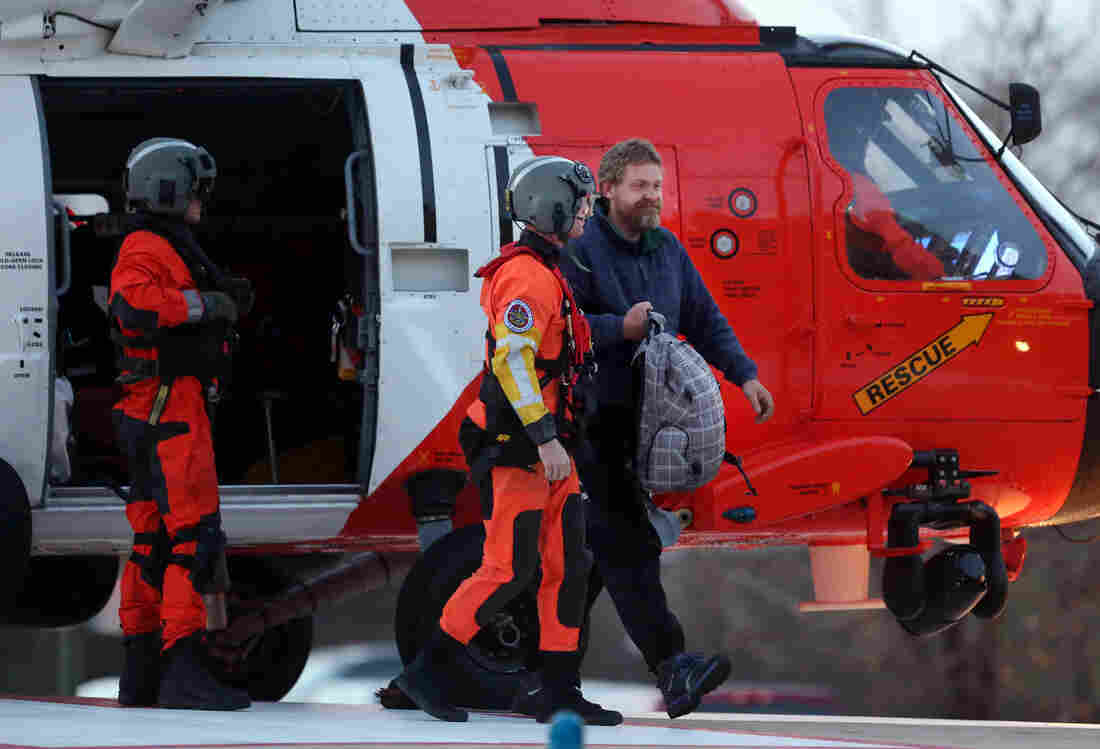 Louis Jordan (right), walks from the Coast Guard helicopter to the Sentara Norfolk General Hospital in Norfolk, Va., after being found off the North Carolina coast, on Thursday. His family says he sailed out of a marina in Conway, S.C., on Jan. 23, and hadn't been heard from since. Steve Earley/The Virginian-Pilot/AP hide caption 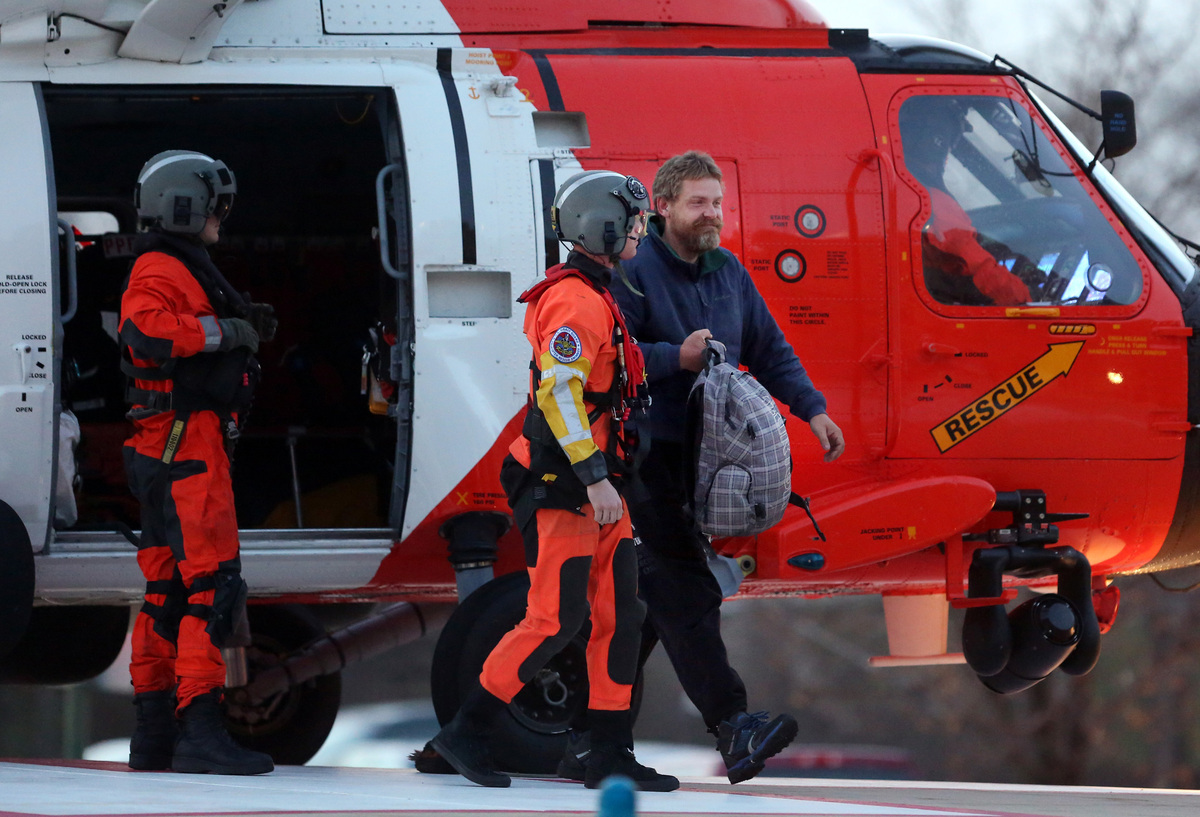 Louis Jordan (right), walks from the Coast Guard helicopter to the Sentara Norfolk General Hospital in Norfolk, Va., after being found off the North Carolina coast, on Thursday. His family says he sailed out of a marina in Conway, S.C., on Jan. 23, and hadn't been heard from since.

In late January, Louis Jordan sailed away from the South Carolina coast aboard his 35-foot sailboat. More than two months later, almost given up for dead, he was rescued 200 miles off Cape Hatteras.

In 66 days at sea, Jordan survived by catching fish and drinking rainwater, he told his rescuers after being spotted by and taken aboard the German-flagged container ship Houston Express.

When he saw the vessel, he waved his arms and blew a whistle. When he finally saw the vessel turn back, he thought "Oh, wow! This is it!" Jordan told reporters.

"My boat got flipped and did a 180 on me while I was sleeping at night, and I was flying through the air and somersaulting and all my junk and all my equipment, all my GPS devices and everything, even my stove dislodged and it was all flying with me, all rolling around," he was quoted by ABC as saying.

The Associated Press reports that Jordan was rescued from the upturned hull of his boat. But it's unclear how or why his apparently full-keeled boat, which would normally right itself after a capsize, wouldn't have done so.

Jordan said he suffered a fractured collarbone when the boat capsized. He survived on pancakes and fish he trapped in his laundry, which worked better than a net, he says.

The Coast Guard airlifted him from the deck of the container ship. In a call from the helicopter to his father, Frank, he said he was "just praying about you because I was afraid that you guys were crying and sad that, you know, I was dead."

"Yeah, well, we were. I thought I lost you," his father replied.

Before his dramatic rescue, Jordan was last seen at Bucksport Plantation Marina in Conway on Jan. 23. That's when he told his family that he was "going into the open water to sail and do some fishing," his mother, Norma Davis, says, according to the AP.

"We expected him to come back, and he did not return," she said. "We knew something happened. To us, it's just a miracle. We're just so thrilled that he was found alive."

The newspaper quotes Doss as saying that the Coast Guard "tracked his whereabouts to the marina, but it was unclear where he was heading when he left."

Doss says the details of Jordan's whereabouts since January and how he might have survived for more than two months at sea were still unclear, according to the AP.

"We don't know where he capsized," Doss said. "We really won't know what happened to him out there until we talk to him" at length.

Earlier, Coast Guard Lt. Krystyn Pecora said there was "no reason to question what happened, and we'll get more information when they can speak to him."

Jeff Weeks, the manager at Bucksport Marina, says he knew Jordan, and his boat Angel, well, calling him a nice guy and "quiet gentleman."

Weeks is quoted by Pilotonline.com as saying that it may have been Jordan's first experience on the open ocean. "He might sail up and down the Intracoastal Waterway, but he didn't have the experience he needed to go out into the ocean."