Accessibility links
U.N. Demands Access To Besieged Palestinian Camp In Damascus : The Two-Way Thousands of people are trapped in the Yarmouk camp, where water and supplies are lacking. The area under Syrian military siege for two years is now threatened by Islamic State militants. 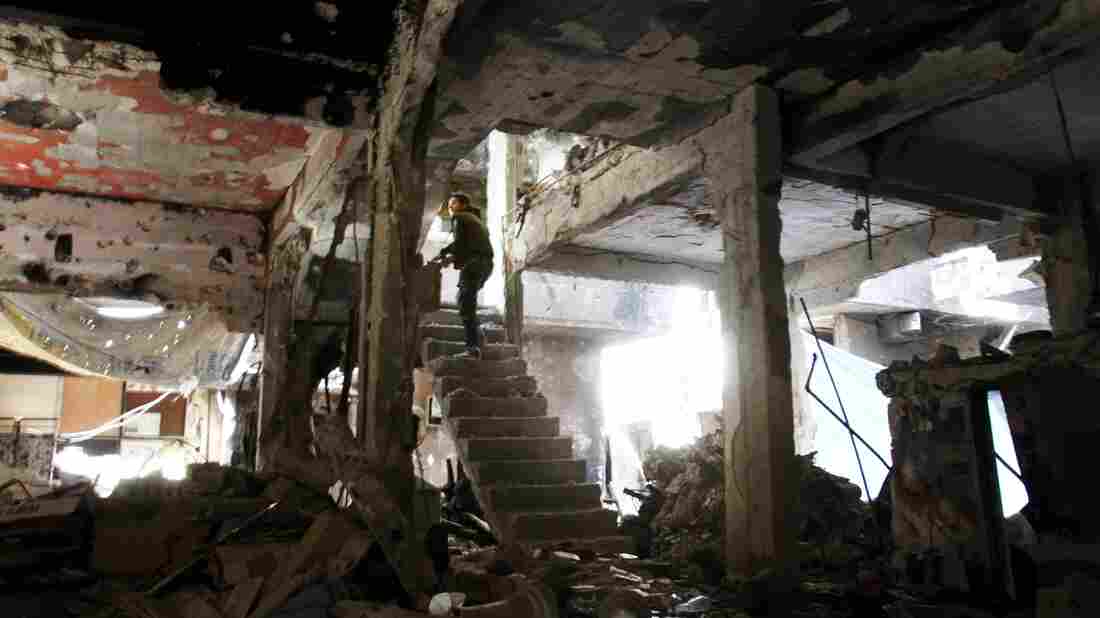 A man stands on a staircase inside a demolished building in the Yarmouk Palestinian refugee camp in the Syrian capital, Damascus, on Monday. Youssef Karwashan/AFP/Getty Images hide caption 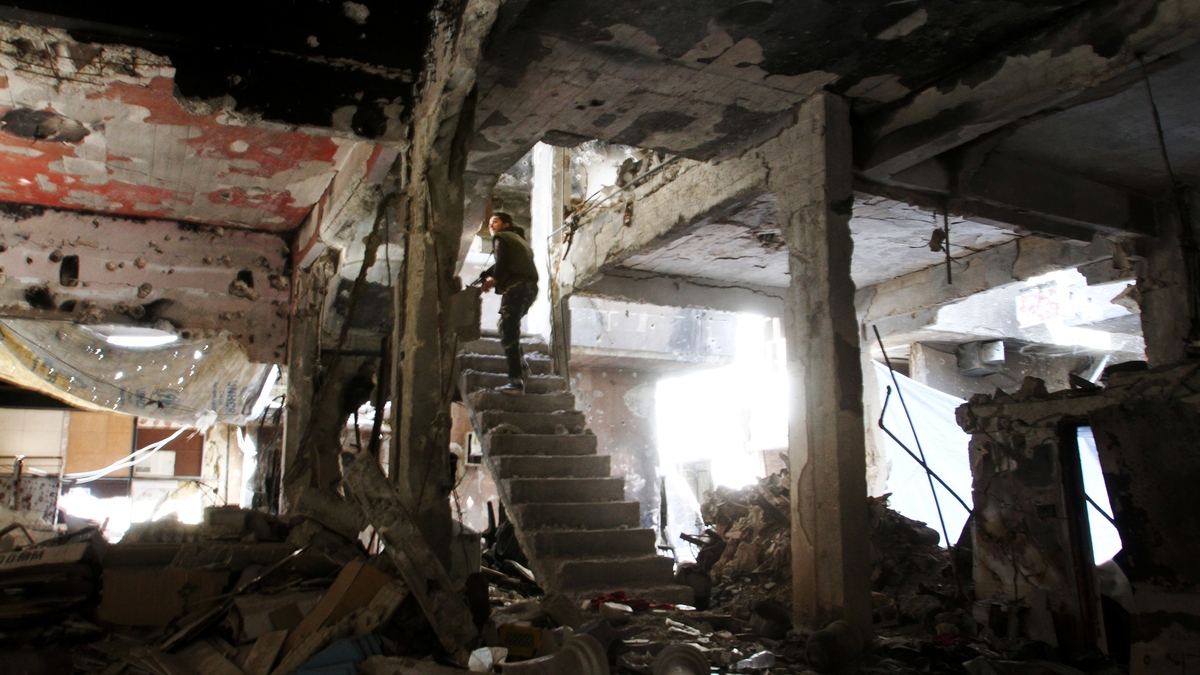 A man stands on a staircase inside a demolished building in the Yarmouk Palestinian refugee camp in the Syrian capital, Damascus, on Monday.

The U.N. Security Council is calling for immediate humanitarian access to help thousands of people trapped in the Yarmouk Palestinian camp in southern Damascus.

Yarmouk's 18,000 residents have been living under Syrian military siege for the past two years. But their situation has grown even worse over the past week, as the self-proclaimed Islamic State, or ISIS, made a sudden power grab from the neighboring suburbs.

Clashes are raging between ISIS and anti-regime Palestinian and Syrian factions, which have lost at least 80 percent of the camp to the extremists. The violence has left families trapped in their homes. Water in the camp has been cut off for eight months, and households are running out of supplies.

Salim Salamah, who heads the Palestinian League for Human Rights, says residents are also suffering under government airstrikes and barrel bombs. Originally from Yarmouk and now based in Sweden, Salamah says activists on the ground have tallied 25 barrel bomb attacks and four airstrikes in the past day alone. Describing the inaccuracy of the munitions, he says, "At least one barrel bomb landed on a cemetery ... and Yarmouk is densely populated so those bombs are also hitting residential buildings."

Syrian President Bashar Assad has consistently denied that his forces possess or use of barrel bombs.

In footage filmed by Yarmouk activists, an elderly man sits amid the rubble where his house once stood. A young child is perched on his lap. He picks up a piece of shrapnel from the ground and cries out: "This is landing on our children!

"We don't want your aid, we want to go back to our country," he says, his voice cracking with emotion. The Palestinian man is referring to his lost homeland.

Yarmouk began as a refuge for Palestinians forced from their homes by the 1948 conflict that saw the creation of Israel. Although it is still referred to as a camp, it has evolved into a bustling, working-class neighborhood that is home to Palestinians and Syrians alike.

Some 150,000 people lived in Yarmouk before the Syrian revolt broke out in 2011. During the uprising, it became a refuge once again for those displaced by the conflict and served as a safe-zone for opposition activists, who fought to keep the camp a demilitarized zone.

All of that changed on Dec. 16, 2012, when Syrian warplanes targeted the camp for the first time. In the ensuing hours, the rebel Free Syrian Army took control of Yarmouk. The regime sealed off the area, preventing people from entering or exiting and halting the flow of basic supplies except for sporadic allowances of U.N. deliveries.

Since that time, Amnesty International has documented 200 deaths, many of them children and elderly, due to malnutrition. The rights group says that of all the areas under siege by the regime and warring factions in Syria, Yarmouk was the hardest hit due to its urban environment.

The ability of ISIS to launch an attack on Yarmouk has raised questions about how the extremist group was able to invade such a tightly controlled area.

"Logistically speaking, the camp was totally besieged for the past two years —nothing goes in or out unless the regime approves it. How did hundreds of fighters manage to raid the area with heavy weapons in a matter of hours and take over in a matter of days?" Salamah says.

The Syrian Observatory for Human Rights says it was al-Qaida affiliate Jabhat al-Nusra, which has steadily gained power in Yarmouk, that allowed ISIS to enter.

If the self-declared Islamic State manages to take control of Yarmouk, it will be the group's first foothold in Damascus proper. For civilians, the U.N. Security Council's call for safe passage could help their plight.

One Palestinian activist from Yarmouk, who declined to be named to preserve the neutrality of his work, says that for the regime, the suffering of Palestinians in Yarmouk "is an international embarrassment."

The ISIS advance also could represent an opportunity for the government to take back the camp with full backing from the international community.