Accessibility links
USPS Picks Perfect Line For Maya Angelou Stamp — If Only It Were Hers : The Two-Way A limited-edition stamp from the U.S. Postal Service, which was intended to honor the late poet, bears a quote that was actually written by a different author. 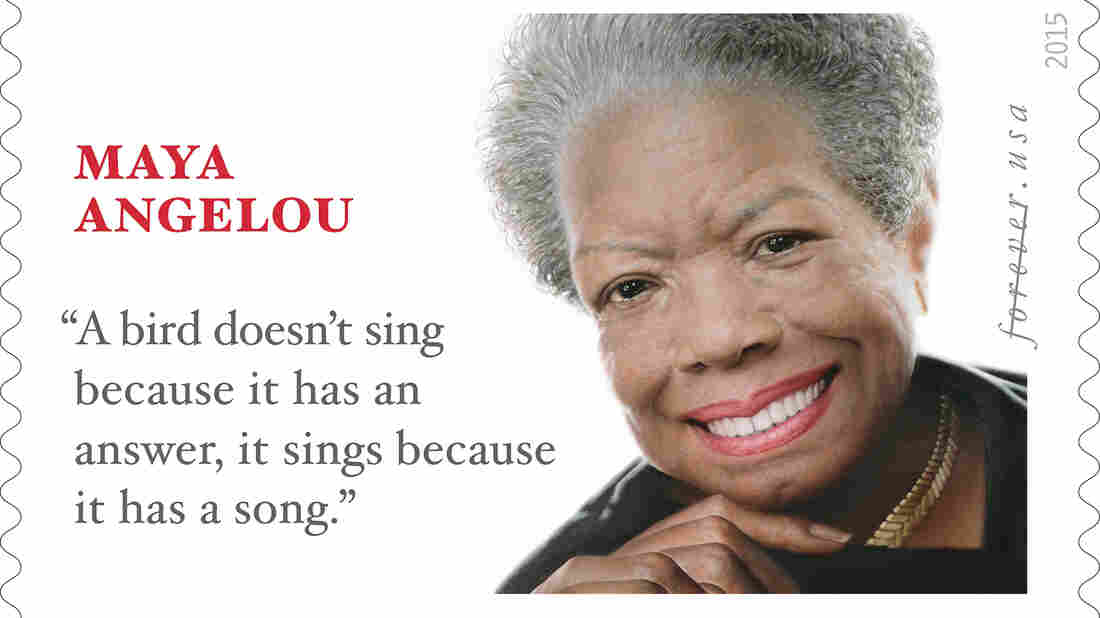 The celebrated poet Maya Angelou crafted a number of lines that have resonated with her readers — but the one on this stamp, it turns out, isn't one of them. AP hide caption 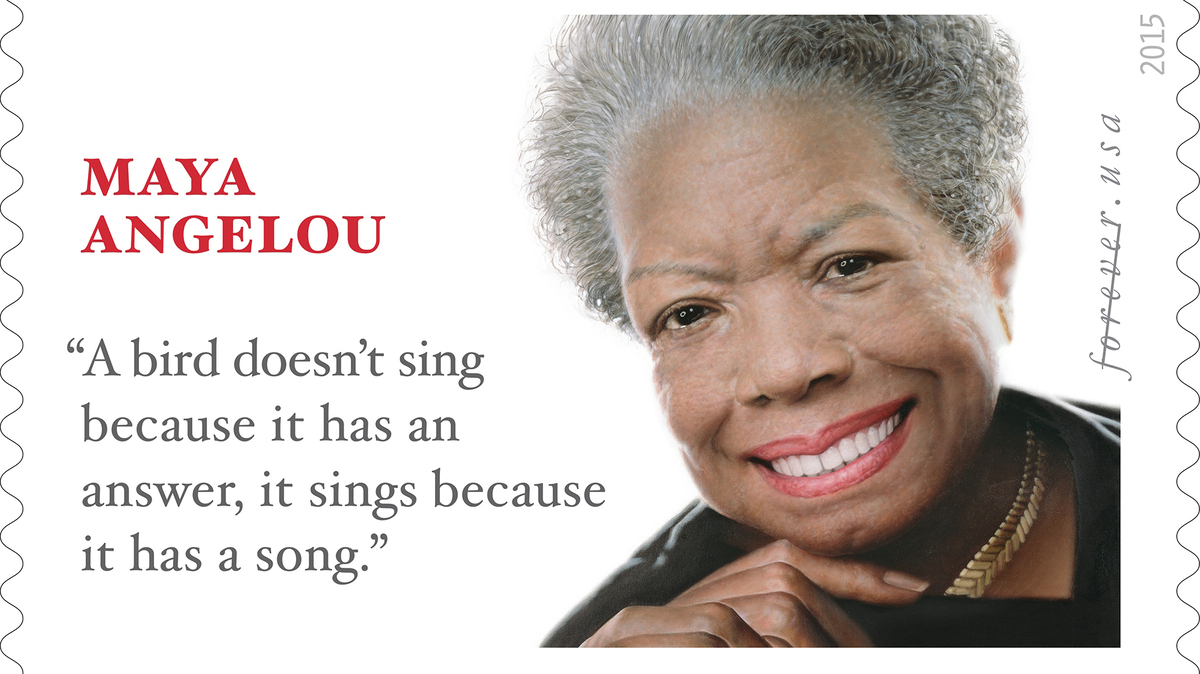 The celebrated poet Maya Angelou crafted a number of lines that have resonated with her readers — but the one on this stamp, it turns out, isn't one of them.

As Abraham Lincoln always said, "The trouble with quotes on the Internet is that you never know if they're accurate."

Well, no — barring a weird rift in time, he probably didn't say that. But when it comes to the quotations of other famous figures — and, it seems, even life offline — things occasionally get far murkier.

On Tuesday, the USPS unveiled a limited-edition stamp intended to honor the late poet Maya Angelou, featuring her beaming smile and a choice quotation to fill the frame. "A bird doesn't sing because it has an answer," reads the stamp, "it sings because it has a song."

A moving sentiment, to be sure, and one that gracefully dovetails with the title to Angelou's best-known work, her memoir, I Know Why the Caged Bird Sings. Perhaps for that reason, when that famous sentence gets uttered, Angelou's name often isn't far behind. Even President Obama reinforced the link in his opening remarks at the presentation of the 2013 National Medal of Arts and National Humanities Medal.

Cue the rain on the parade: On Monday, the day before the stamp's big reveal, The Washington Post confirmed that the quotation did not, in fact, originate with Maya Angelou. Rather, it was author Joan Walsh Anglund, whose 1967 book A Cup of Sun featured the line, only with the word "he" instead of "it." 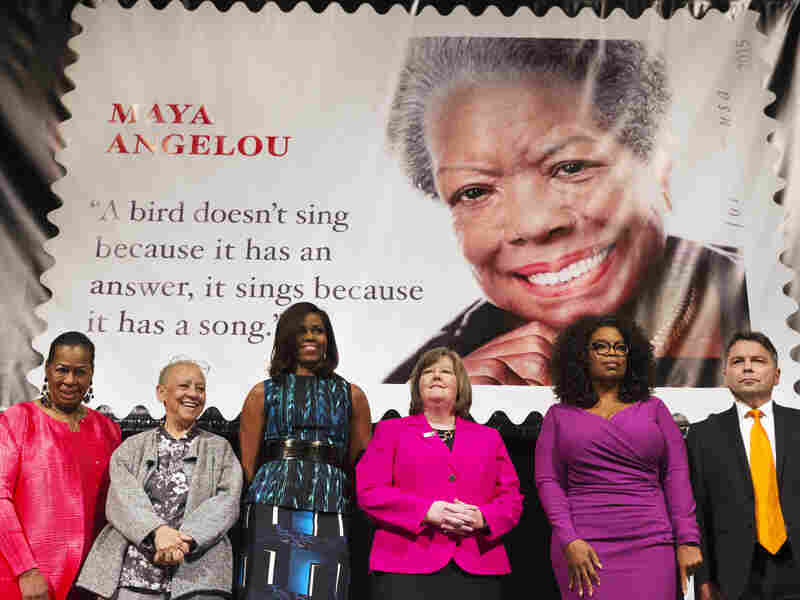 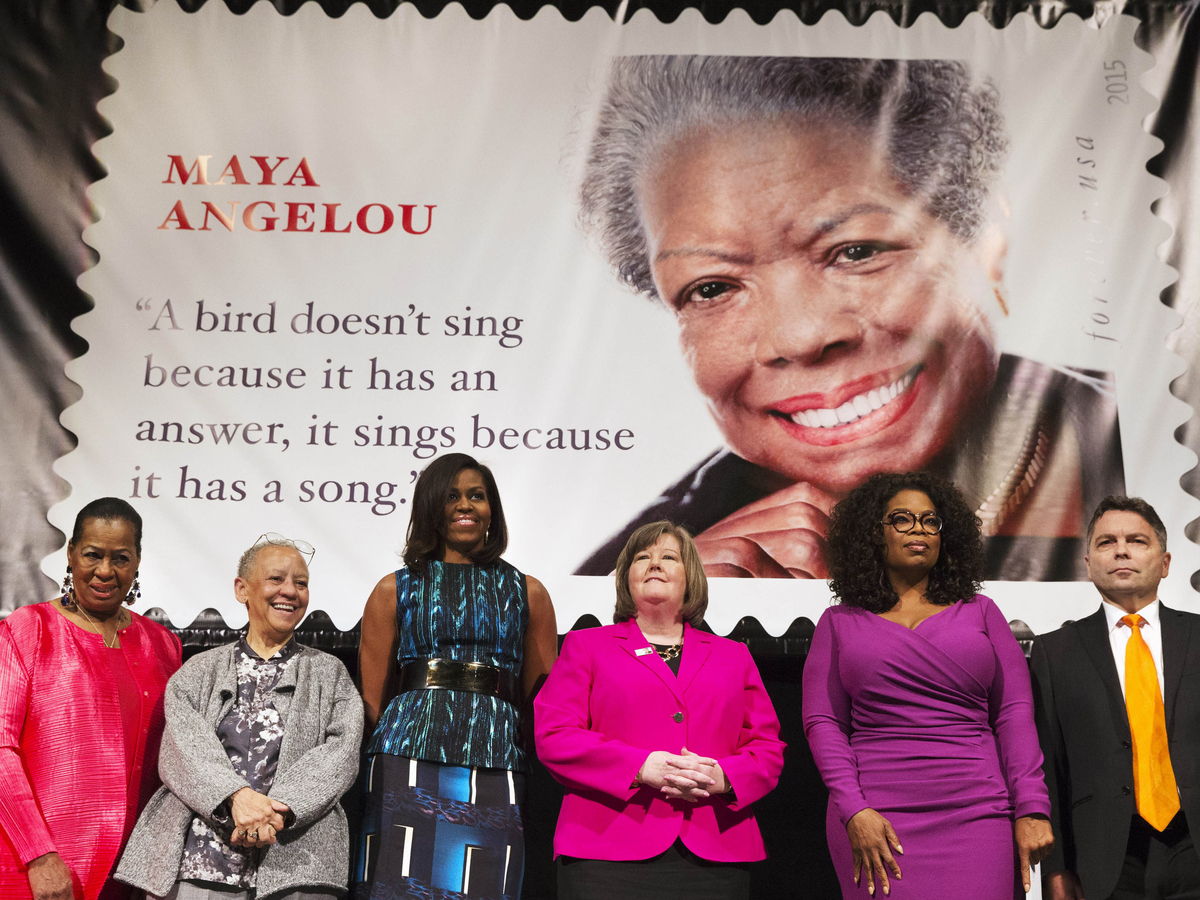 First lady Michelle Obama and Oprah Winfrey, among other distinguished presenters, attend the unveiling of the Maya Angelou Forever Stamp on Tuesday.

USPS spokesman Mark Saunders responded to The Post, noting, "Had we known about this issue beforehand, we would have used one of [Angelou's] many other works. ... The sentence held great meaning for her and she is publicly identified with its popularity."

On Tuesday, David Partenheimer, another spokesman for the Postal Service, added: "The sentence was chosen to accompany her image on the stamp to reflect her passion for the written and spoken word."

Anglund, for her part, took the news amiably.

"It's an interesting connection, and interesting it would happen and already be printed and on her stamp," she told The Post. "I love her and all she's done, and I also love my own private thinking that also comes to the public because it comes from what I've been thinking and how I've been feeling."

The Internet, meanwhile, took the news as the Internet so frequently does — with a worldwide smirk and an armada of Photoshopped images. British newspaper The Telegraph compiled a few of the choicest nuggets, but for now, here's a personal favorite — and a caution that all would-be quoters might do well to remember: