Accessibility links
Scientists Release Largest Map Yet Of Dark Matter In The Cosmos : The Two-Way Researchers from the Dark Energy Survey used data captured by one of the world's most powerful digital cameras to put together the largest contiguous map of dark matter created.

Scientists Release Largest Map Yet Of Dark Matter In The Cosmos

Scientists Release Largest Map Yet Of Dark Matter In The Cosmos

Scientists have released the first of several dark matter maps of the cosmos.

Researchers from the Dark Energy Survey used data captured by the Dark Energy Camera, a 570-megapixel imaging device they say is one of the world's most powerful digital cameras, to put together the largest contiguous map of dark matter created. They presented their findings Monday at a meeting of the American Physical Society in Baltimore.

The scientists say the map covers only about 3 percent of the area of sky. They hope it will improve understanding of the role dark matter plays in the creation of galaxies — and to investigate dark energy. Here is the map: 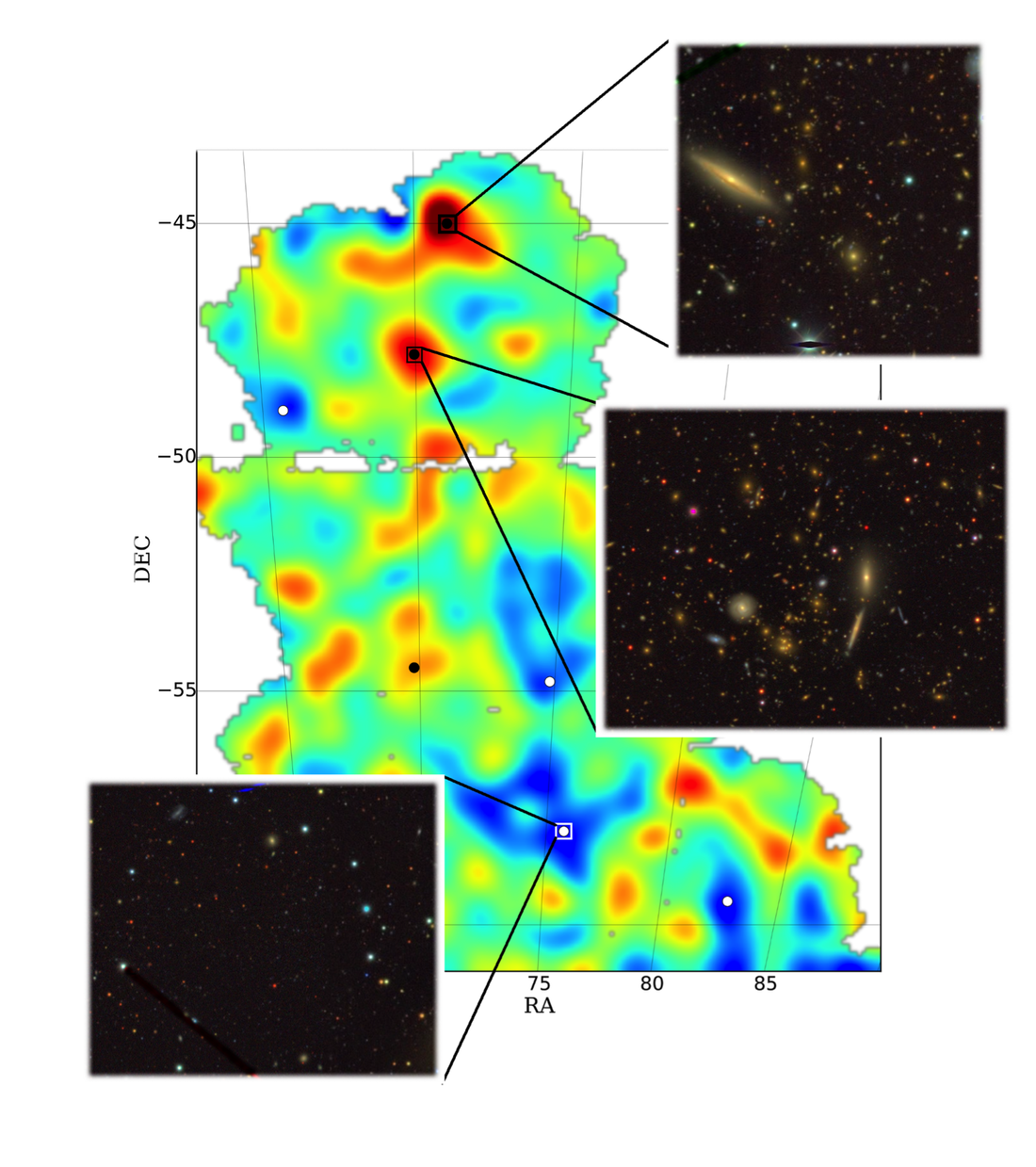 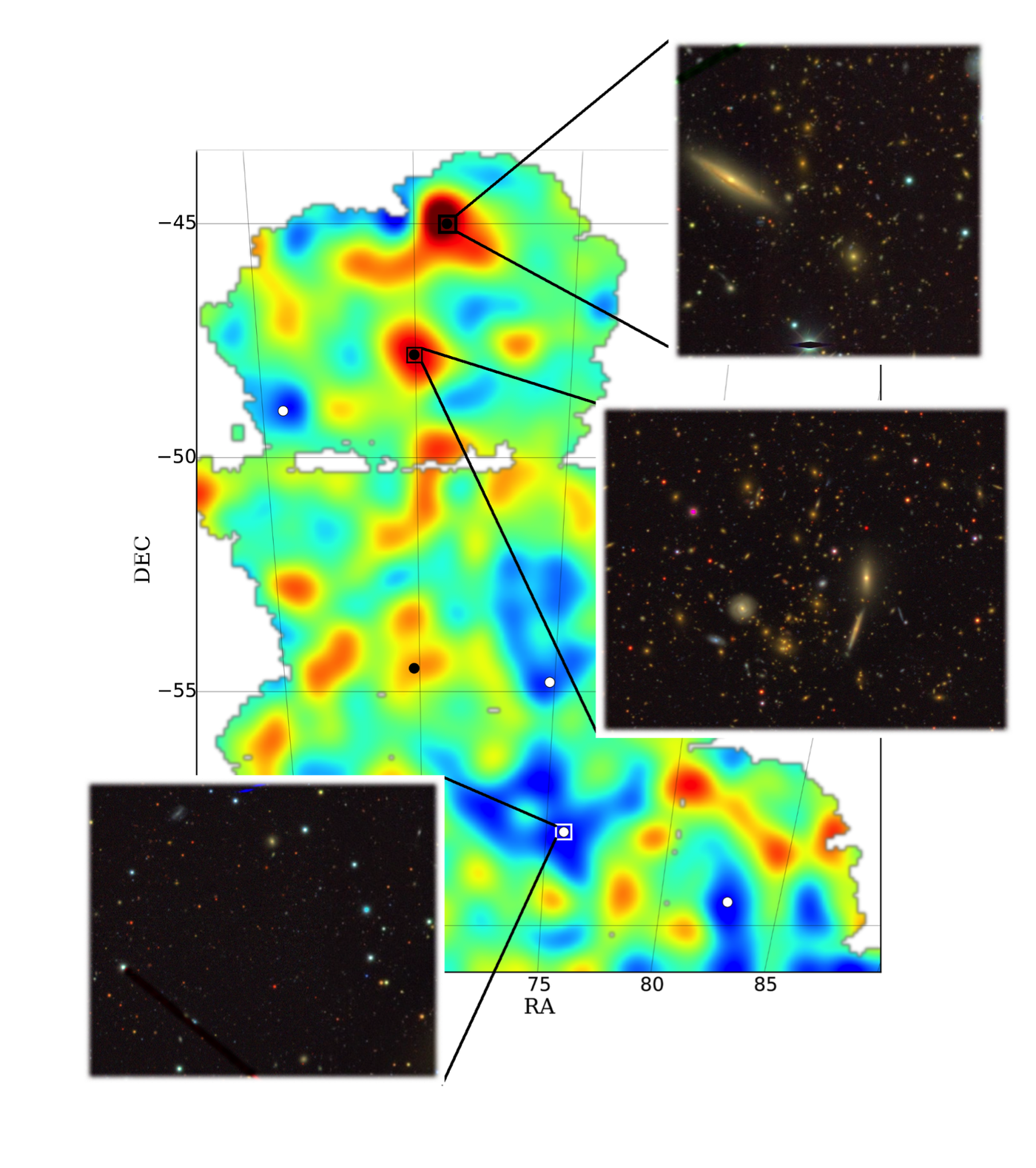 Mass map with images of two galaxy clusters and a cosmic void.

"We measured the barely perceptible distortions in the shapes of about 2 million galaxies to construct these new maps," Vinu Vikram of Argonne National Laboratory, one of the lead scientists on the study, said in a statement Monday. "They are a testament not only to the sensitivity of the Dark Energy Camera, but also to the rigorous work by our lensing team to understand its sensitivity so well that we can get exacting results from it."

The Fermi National Accelerator Laboratory built and tested the camera, which is mounted on the 4-meter Victor M. Blanco telescope at the Cerro Tololo Inter-American Observatory in Chile. The National Center for Supercomputing Applications at the University of Illinois in Urbana-Champaign processed the data that went into the map.

Here's more from the statement:

"As scientists expand their search, they will be able to better test current cosmological theories by comparing the amounts of dark and visible matter.

"Those theories suggest that, since there is much more dark matter in the universe than visible matter, galaxies will form where large concentrations of dark matter (and hence stronger gravity) are present. So far, the DES analysis backs this up: The maps show large filaments of matter along which visible galaxies and galaxy clusters lie and cosmic voids where very few galaxies reside. Follow-up studies of some of the enormous filaments and voids, and the enormous volume of data, collected throughout the survey will reveal more about this interplay of mass and light."

"Our analysis so far is in line with what the current picture of the universe predicts," said Chihway Chang, another of the lead scientists who is with ETH Zurich. "Zooming into the maps, we have measured how dark matter envelops galaxies of different types and how together they evolve over cosmic time. We are eager to use the new data coming in to make much stricter tests of theoretical models."

The Dark Energy Survey is on the second year of a five-year study.

For more on dark energy and dark matter and how they differ, please visit this page.