Accessibility links
Documents Show Global Outpouring Of Grief Over Lincoln's Assassination : The Two-Way The State Department has released documents from 1865 that highlight the disbelief and profound sympathy over the president's death from governments and private citizens the world over. 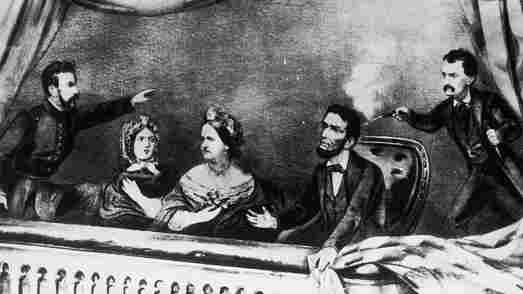 An engraving of the assassination of President Abraham Lincoln at Ford's Theatre in Washington on April 14, 1865. Lincoln died the next day. De Agostini Picture Library/De Agostini/Getty Images hide caption

"The exhibition of profound grief was such as I have never seen equalled. Several overcome by their emotion, sat down upon the very ground and wept."

That was how Thomas Nelson, a U.S. minister to Chile, described the reaction of ordinary citizens in Spain to the news of President Abraham Lincoln's assassination in 1865.

It's just one example of the outpouring of shock and grief over Lincoln's death that fills a newly digitized compilation of State Department documents detailing worldwide reaction to the assassination.

Governments and private citizens around the world gave their condolences but also offered reassurance that the U.S. would be in steady hands under Lincoln's successor, Vice President Andrew Johnson.

China's chief secretary of state for foreign affairs, Prince Kung, said Lincoln's death "inexpressibly shocked and startled me." Kung expressed relief that Johnson succeeded Lincoln and that "the affairs of government were going on quietly as usual."

Governments from far and wide issued proclamations and declared periods of mourning after hearing of Lincoln's death on April 15, 1865. A letter from Frederick Hassaurek, the U.S. minister to Ecuador, on May 29, 1865, reads: "All the officers and employés of the republic of Ecuador shall wear mourning for three days, during which time the Ecuadorian flag shall be displayed at half-mast from all the public buildings."

The new volume is part of an ongoing project by the U.S. Office of the Historian to digitize a series called "The Foreign Relations of the United States." The series is the official documentary historical record of major U.S. foreign policy decisions and diplomatic activity.

This special volume, titled Appendix to Diplomatic Correspondence of 1865, comes on the 150th anniversary of Lincoln's death.

Documents in the volume suggest that private citizens understood Lincoln's place in history. This one was written on behalf of 41 residents from the French town of Boyan-on-the-Sea:

"To the United States Minister in Paris:

"Frenchmen living upon the shores of the Atlantic have but to glance over the ocean, and thus feel as if they were in immediate communication with your country.

"We cannot help admiring the honest and much respected Abraham Lincoln, who resisted the attacks of southern fanatics, and thus created four millions of new men. We admired his calmness in the struggle, his lenity in victory, taught him in his civil education, by his religious observance of the law. And now the miserable, depraved slaveholders, capable of all crime, have cowardly deprived him of his life, and attempted that of two noble souls, Mr. Seward and his son, worthy colleagues and fellow-countrymen of the newly elected citizen President.

"With firm hopes that this horrid event will serve to strengthen the Union, we ask you to receive our condolence and our cordial sympathy."

The documents also detail letters from immigrant communities in the U.S., as well as local councils and such organizations as the YMCA in Albany, N.Y. There is a resolution by the U.S. Senate and House of Representatives, written in December 1865, to commemorate Lincoln's birthday, which stands to this day:

"Resolved, That the House concur in the foregoing resolution that the two houses of Congress will assemble in the hall of Representatives on Monday, the 12th day of February next, being the anniversary of the birth-day of the late President, to hear an address upon his life and character, and participate in such other commemorative exercises as may be proper on that occasion, recited in said resolution."