Accessibility links
Mercury Probe Set For Crash-Landing On April 30 : The Two-Way Messenger will plunge into the planet's surface to create a new impact crater that scientists hope a later probe will be able to use as a benchmark to study weathering. 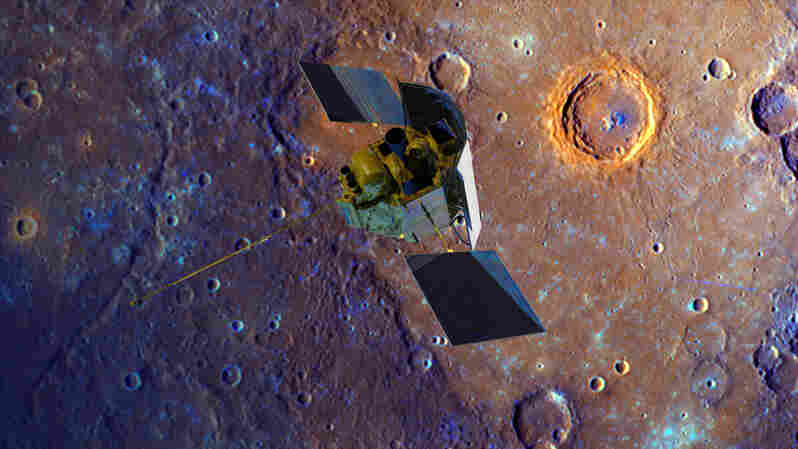 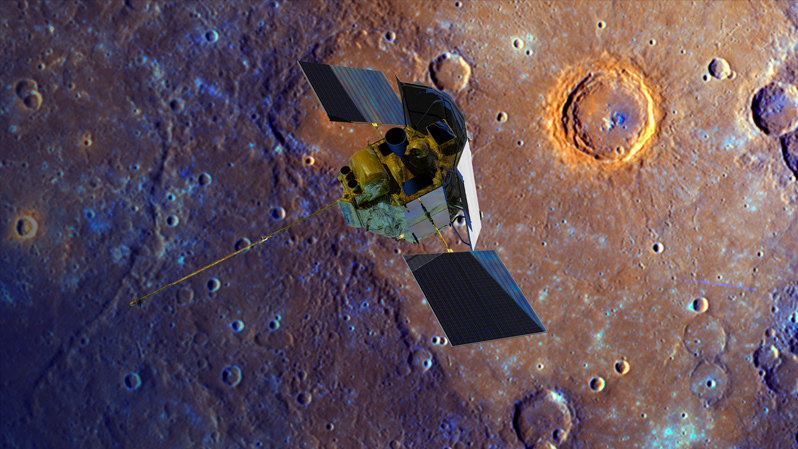 Messenger, the space probe that discovered water on Mercury and has been circling the planet for four years, will take a swan dive at the end of the month in hopes of discovering something about weathering on the surface.

Messenger (an acronym for MErcury Surface, Space ENvironment, GEochemistry, and Ranging spacecraft) was launched in 2004, but took a roundabout journey to Mercury, building up speed with slingshot maneuvers around the sun, Earth, Venus and even buzzing Mercury itself three times before entering the planet's orbit in March 2011.

According to Space.com, "The probe's observations have helped scientists construct the best-ever maps of the planet, and Messenger confirmed that carbon-containing organic compounds and water ice exist inside the permanently shadowed craters near Mercury's poles."

But ground controllers will set Messenger up for a suicide mission with a final orbital correction on April 24.

The crash-landing will occur six days later on April 30, forming an impact crater on Mercury (already the most-cratered planet in the solar system).

In 2024, a joint European-Japanese mission, known as the BepiColombo Mercury probe and due for launch in 2017, will take a look at Messenger's gravesite to see how much weathering has occurred in the intervening nine years.

"Having an impact crater, even a small one, whose origin date is precisely known, will be an important benchmark," Sean Solomon, the mission's principal investigator and director of Columbia University's Lamont-Doherty Earth Observatory, is quoted by Space.com as saying.

"[Numerous] robotic and human-crewed spacecraft that have landed on the Moon; a large and growing number of landers and rovers that have set down (intact or in pieces) on Mars; a similarly decorated corps of heat-resistant robots on Venus; the Galileo spacecraft, which first sent an atmospheric probe into Jupiter's cloudtops, and then added itself to this short list in an end of mission flame-out; Cassini's Huygens probe on Titan; the NEAR spacecraft on the asteroid Eros; and finally, and most recently, the partially successful landing of Europe's Philae probe on comet Churyumov-Gerasimenko."