Accessibility links
EU Leaders Pledge More Ships To Patrol Mediterranean For Migrants : The Two-Way Days after 900 were feared drowned in a single accident, the European Union is struggling to forge a new policy to combat the flow of people setting off mostly from Libya in overcrowded boats. 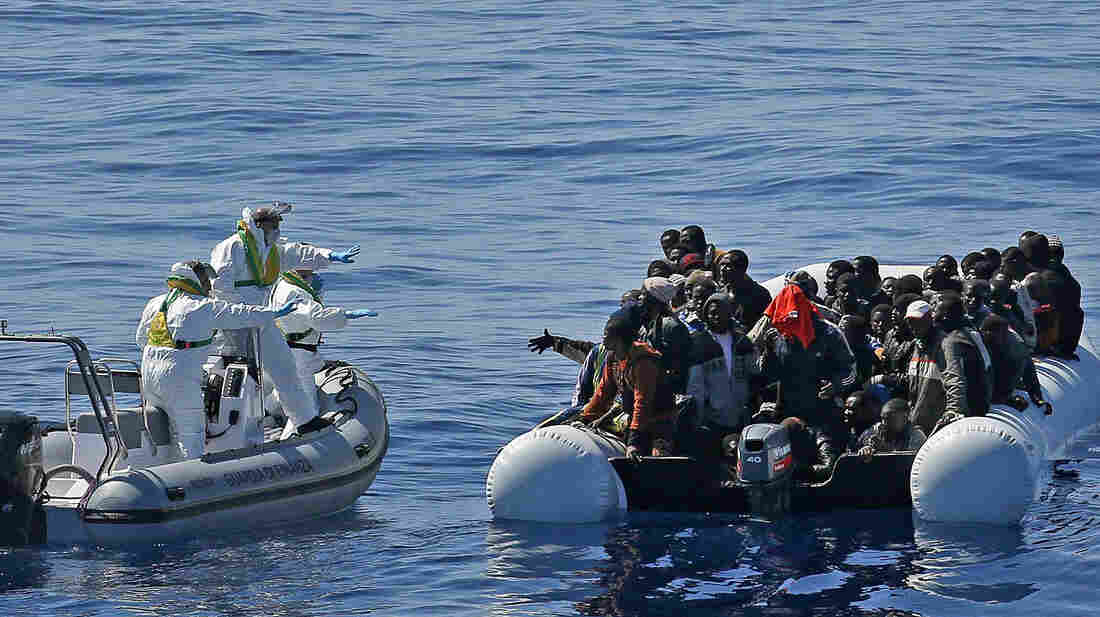 In this photo made available Thursday, April 23, 2015, migrants crowd and inflatable dinghy as the Italian Coast Guard approaches them, off the Libyan coast, on Wednesday. Alessandro Di Meo/AP hide caption 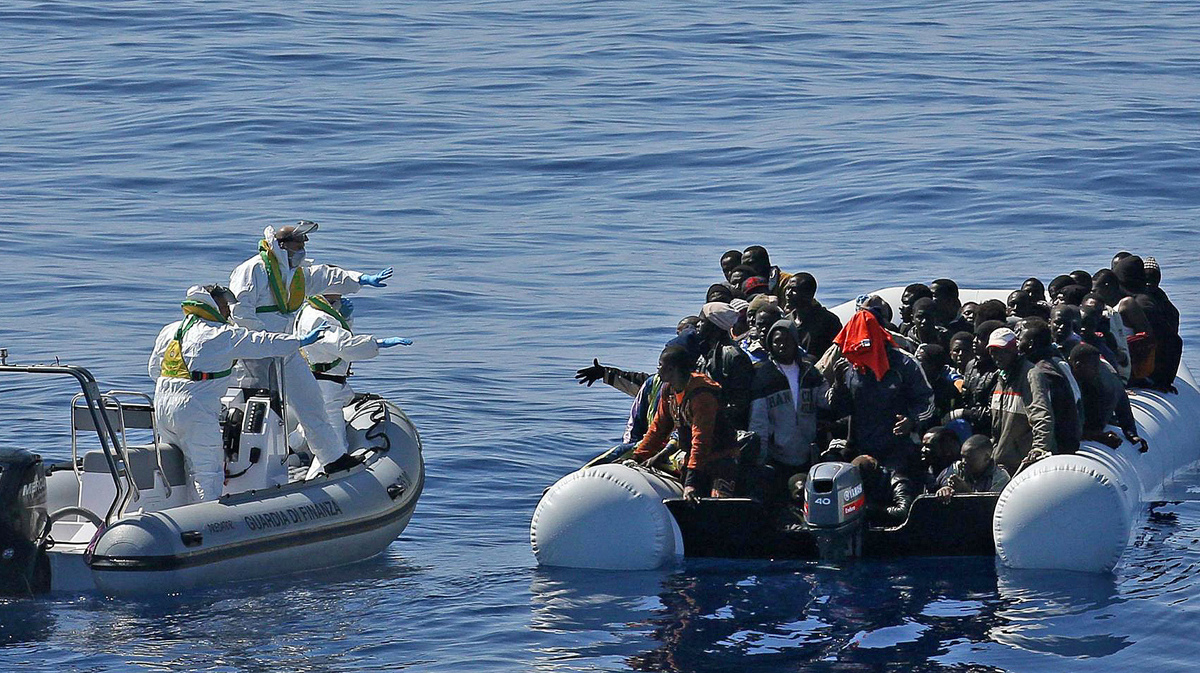 In this photo made available Thursday, April 23, 2015, migrants crowd and inflatable dinghy as the Italian Coast Guard approaches them, off the Libyan coast, on Wednesday.

The European Union has agreed to more ships, planes and helicopters to patrol the Mediterranean in hopes of stopping migrants from Africa and the Middle East and stopping people smugglers who facilitate them.

At an emergency summit in Brussels, Britain pledged three ships, while Germany and France said they would provide two each. Belgium, Ireland, Latvia and Lithuania were also to supply ships, patrol boats and helicopters.

EU states also agreed to triple funding for the interdiction and rescue effort known as Operation Triton to $9.7 million.

The measures would include capturing and destroying human traffickers' vessels. The move comes days after as many as 900 drowned when a single boat capsized off the Libyan coast.

The Associated Press reported earlier that a draft statement among leaders of the 28 EU nations would "increase search and rescue possibilities" and "undertake systematic efforts to identify, capture and destroy" traffickers' vessels before they are used in human smuggling.

"We will take action now. Europe is declaring war on smugglers," the EU's top migration official, Dimitris Avramopoulos, was quoted by the AP as saying in Malta, where he was attending the funeral of 24 migrants whose bodies were recovered after Sunday's tragedy.

AP says the draft statement also said the EU wants to "set up a first voluntary pilot project on resettlement," with at least 5,000 places for people qualifying for protection.

The rest of those who survive the journey and make it to Europe would be sent back under a new rapid-return programme, according to a confidential draft seen by the Guardian newspaper. Last year 150,000 made it to Italy. This year, more than 36,000 migrants have made it to Italy, Malta and Greece.

The BBC reports that Libya was high on the meeting's agenda, because 90 percent of would-be migrants depart from there — most heading for the Italian island of Lampedusa, the EU territory closest to Libya.

With the self-declared Islamic State now reportedly operating in Libya, the EU
"fears [ISIS] could pose a huge security risk for Europe. In the past, it has explicitly threatened Italy," the BBC says.

In a statement issued by Doctors Without Borders, the aid group said it was disappointed that the EU would "persist in a direction that has proved inefficient and has cost thousands of lives."

"We are amazed to see that the huge means and resources allocated to declaring war on smugglers are not equally invested in saving lives," Aurelie Ponthieu, humanitarian adviser on migration for MSF, said in the statement.

As NPR's Two-Way's Bill Chappell reported earlier this week, the EU called an emergency meeting after the latest disaster involving would-be migrants. It comes nearly two years after a similar sinking prompted calls for a re-evaluation of EU immigration policies. However, such incidents have become routine in the past few years, as migrants from Africa and the Middle East become increasingly desperate to reach Europe.

"With the best will in the world, these issues are not solvable," a senior diplomat at the EU meeting in Brussels was quoted by Reuters as saying. "We can only limit the damage."

The diplomat noted that the yawning gap in living standards between the north and south sides of the Mediterranean was the problem. But others note that the situation has worsened because of the fighting in the Middle East and growing lawlessness in Libya, from where many migrants depart.