Accessibility links
High-Altitude Rescue Underway On Everest : The Two-Way At least 17 people are reported dead on the mountain after a massive quake-triggered avalanche swept through base camp on the south side on Saturday. 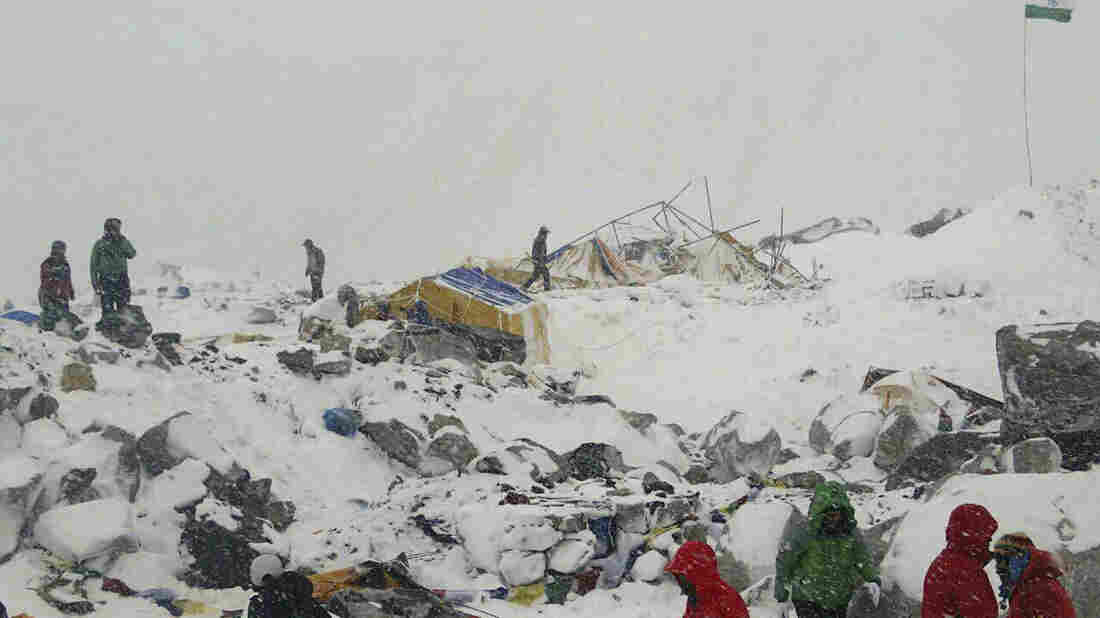 People approach the scene after an avalanche triggered by a massive earthquake swept across Everest Base Camp, Nepal on Saturday. At least 17 people have been killed on the mountain. Azim Afif/AP hide caption 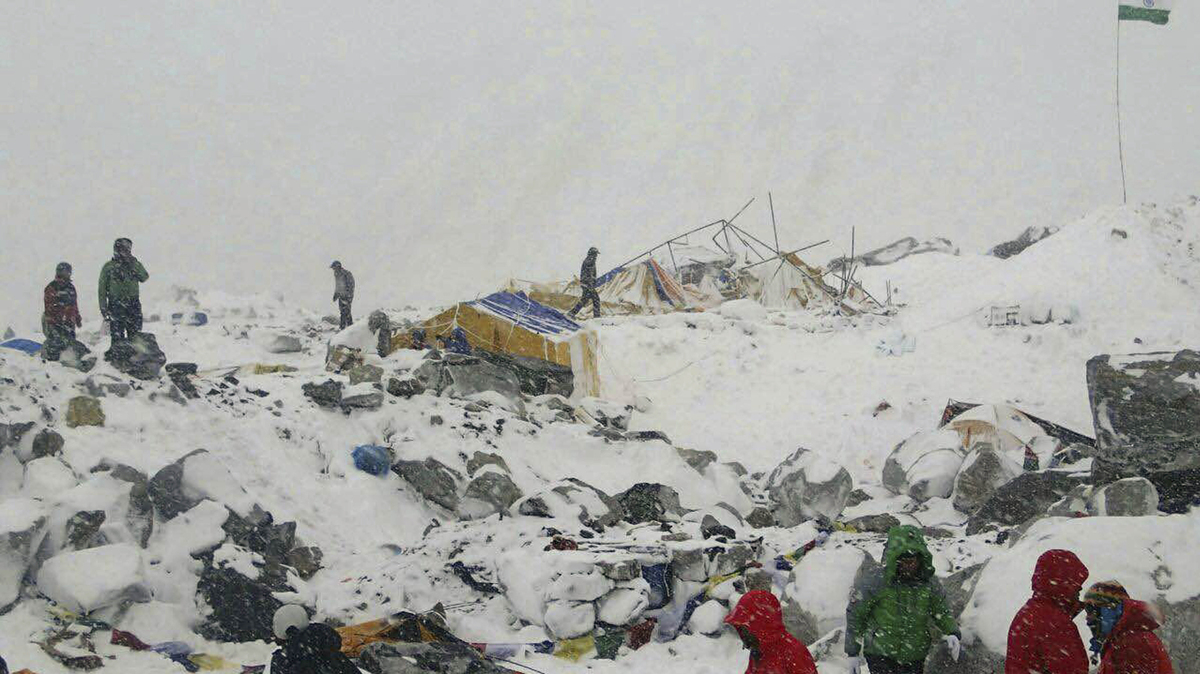 People approach the scene after an avalanche triggered by a massive earthquake swept across Everest Base Camp, Nepal on Saturday. At least 17 people have been killed on the mountain.

Following a powerful quake that has killed more than 2,000 people in Nepal, a high-altitude effort is underway on the slopes of the world's highest peak to rescue trapped climbers and recover the bodies of those killed when the temblor triggered a massive avalanche that swept base camp.

At least 17 people were killed and more than 60 injured when a wall of snow and ice shook loose from the mountain and smashed through the tent city that is Everest Base Camp — a staging area on the south (Nepalese) side of the mountain for support teams and climbers trying to reach the top of the 29,029-foot mountain.

Other climbers are reportedly trapped higher up on the mountain, at or near Camps 1 and 2.

In a post from Saturday, we collected tweets from climbers and officials about the situation on the mountain in the hours immediately after the earthquake and avalanche.

Eric Simonson of Washington-based International Mountain Guides reports that his spoken to his team via sat phone and that "All the IMG members and [Sherpas] are safe. The many climbers up at Camps 1 and 2 from several different teams are all doing well."

"Unfortunately, the news from [Everest Base Camp] is quite bleak," Simonson adds, reporting that the earthquake caused a huge block of ice to snap off high up the mountain.

"The tons and tons of falling ice going this vertical distance created a huge aerosol avalanche and accompanying air blast that hit the upper part of Everest BC and blew many tents across the Khumbu Glacier towards the lower Icefall," he writes.

Pemba Sherpa, 43, a Mount Everest guide, is quoted by The Associated Press saying he was swept almost 1,000 feet by the tumbling wall of ice and snow and "lost consciousness" briefly.

"There are still many people who are still missing on the mountain. There were several tents buried by the snow, several blown away," he was quoted by the AP as saying.

Meanwhile, reports from the north (Tibetan) side of the mountain, where far fewer climbers make attempts, appear to be much better than those from the Nepali side.

All ok here on North Side #Everest. CTMA has requested all teams to return to BC until aftershocks stop. #Everest2015 #earthquake

Summit attempts are traditionally made during short breaks in the weather in early May, so many climbers and their Nepali Sherpa porters were on the mountain when the earthquake occurred just before noon local time on Saturday.

The first group of survivors was flown to Nepal's capital, Kathmandu, but none of their injuries appear to be life threatening, according to the AP.

The news agency says: "Twenty-two of the most seriously injured had already been taken by helicopter for treatment in the village of Pheriche, the location of the nearest medical facility. But bad weather and communications were hampering more helicopter flights, said Ang Tshering of the Nepal Mountaineering Association."

This is Dans little sister Megan. I regret to inform all who loved him that during the avalanche on Everest early this morning our Dan suffered from a major head injury and didn't make it. We appreciate all of the love that has been sent our way thus far and know his soul and his spirit will live on in so many of us. All our love and thanks to those who shared this life with our favorite hilarious strong willed man. He was and is everything to us. Thank you.

Among the climbers reportedly killed on the mountain is Dan Fredinburg, a Google executive who handled product management for the tech giant's privacy team. StartupGrind.com, a website that follows the tech industry, says that Fredinburg co-founded the Google Adventure Team "to translate the Google Street View concept into extreme, exotic locations like the summit of Mount Everest or the Great Barrier Reef off Australia."

Fredinburg's sister posted the news of her brother's death on his Twitter account and Jagged Globe, the Everest team he belongs to, also posted a statement.