Accessibility links
Baltimore Riots: 'This Is A Dead Neighborhood' : The Two-Way The neighborhood at the center of the Baltimore riots was once a thriving area. But it never recovered after the riots of 1968, and now it's been rocked by another violent outbreak.

Baltimore Riots: 'This Is A Dead Neighborhood'

Baltimore Riots: 'This Is A Dead Neighborhood' 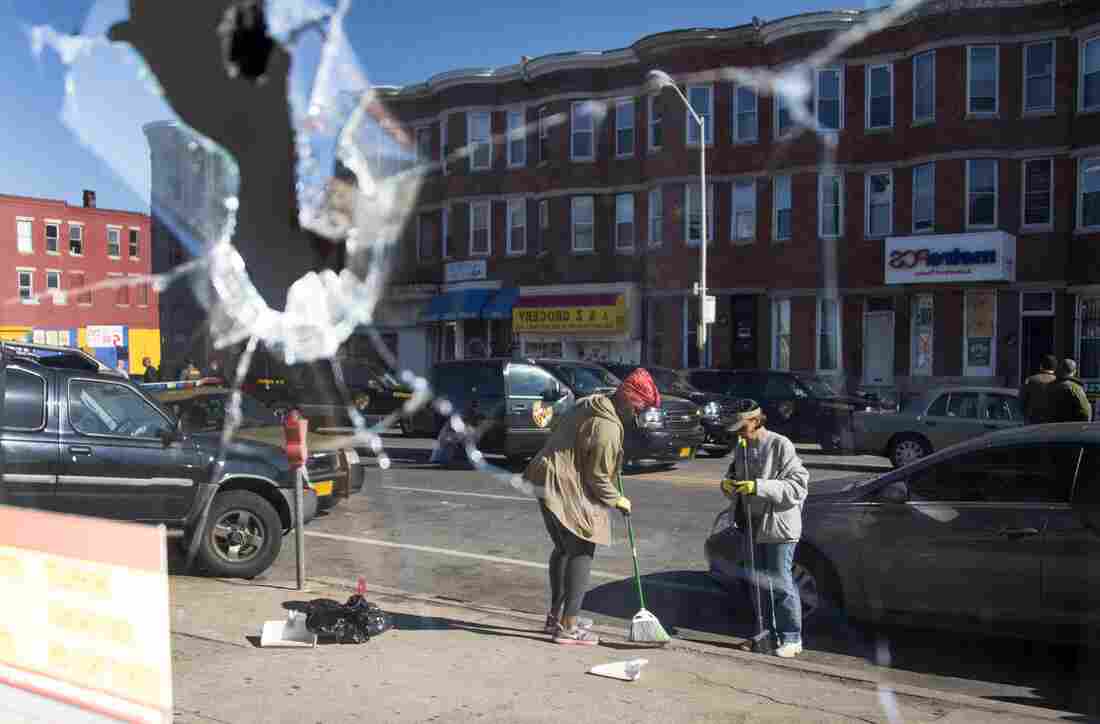 Two women sweeping up the streets are reflected in the broken window of a check cashing store in Baltimore, Maryland, on Tuesday. Jim Watson/AFP/Getty Images hide caption 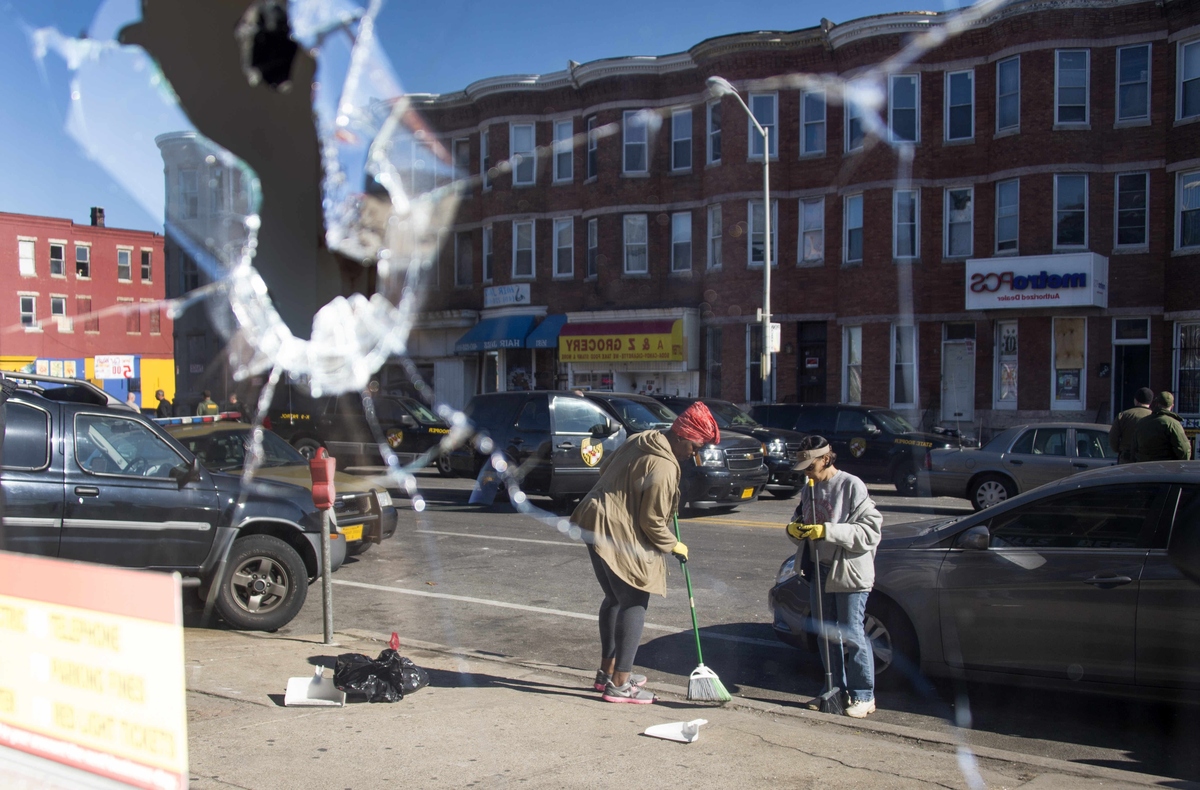 Two women sweeping up the streets are reflected in the broken window of a check cashing store in Baltimore, Maryland, on Tuesday.

Glass lay smashed on the sidewalk. The owner of Wonder Land Liquors just stared at the inside of her store in shock.

Everything was gone. All the liquor had been looted; the shelves had been tipped over and most of the glass was broken.

Bonnie Smith, who lives in the neighborhood, hugged the owner.

Smith said that she's not old enough to remember the last time anger spilled onto the streets of west Baltimore like this. It happened back in 1968, after the assassination of Martin Luther King Jr.

She complained that those in power have forgotten about this part of town. Police, she said, formed a barrier around The Avenue — as this part of the Sandtown-Winchester neighborhood is called by residents — and allowed people to destroy only the black area of town.

City leaders, she said, have to change. They have to acknowledge the people who live here.

"They have to step up," Smith said. "You just can't brush it away and because it's a certain community, let it go." 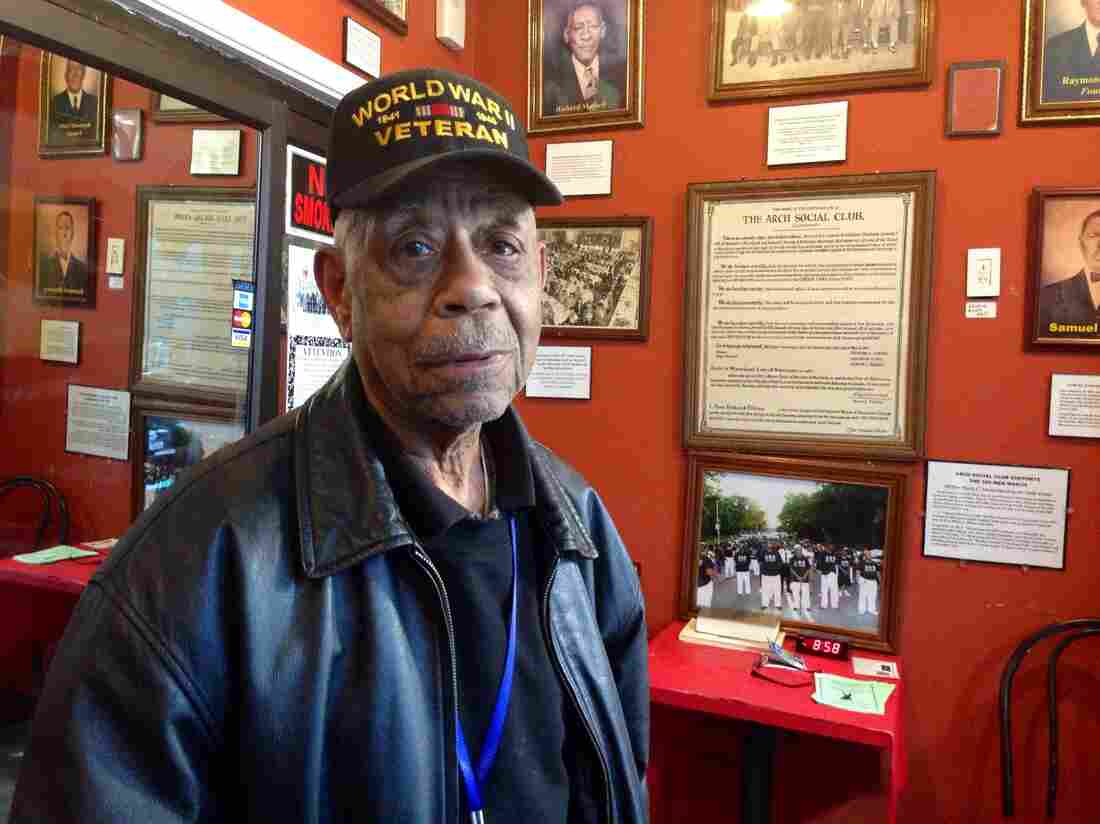 Decades ago, this neighborhood was a thriving place. Both sides of Pennsylvania Avenue were filled with music clubs.

Through the '60s, it was a prominent stop on the chitlin' circuit — places that were safe and acceptable for black musicians and entertainers.

I met 91-year-old Leonard Washington inside the Arch Social Club building, a bar and dance hall that has been in this neighborhood since 1972.

Washington says he remembers that when he was about 10-years old, he walked past one of those clubs and saw Billie Holiday.

"I'll never forget the dress she had on," he said. It was pink satin and she was wearing bows in her hair. She was so spectacularly beautiful, Washington said, that he pressed his face against the window. And even after a man closed the blinds, he still tried to sneak a peak.

The neighborhood, he said, enchanted him. He served in World War II and when he came back he worked to buy himself one of the pretty row houses that dot the side streets of the neighborhood.

At the social club, he's still surrounded by those memories. There are pictures everywhere of dapper, young black men dressed in suits and of their beautiful wives. Even the facade of the building — with its Greek columns, and sculptures — harkens back to past glories.

But the riots of 1968 left the neighborhood destroyed and it never quite recovered.

Washington is now the oldest living member of the Arch Social Club.

"The only thing that is left of the old neighborhood is a cemetery down the street," he said. 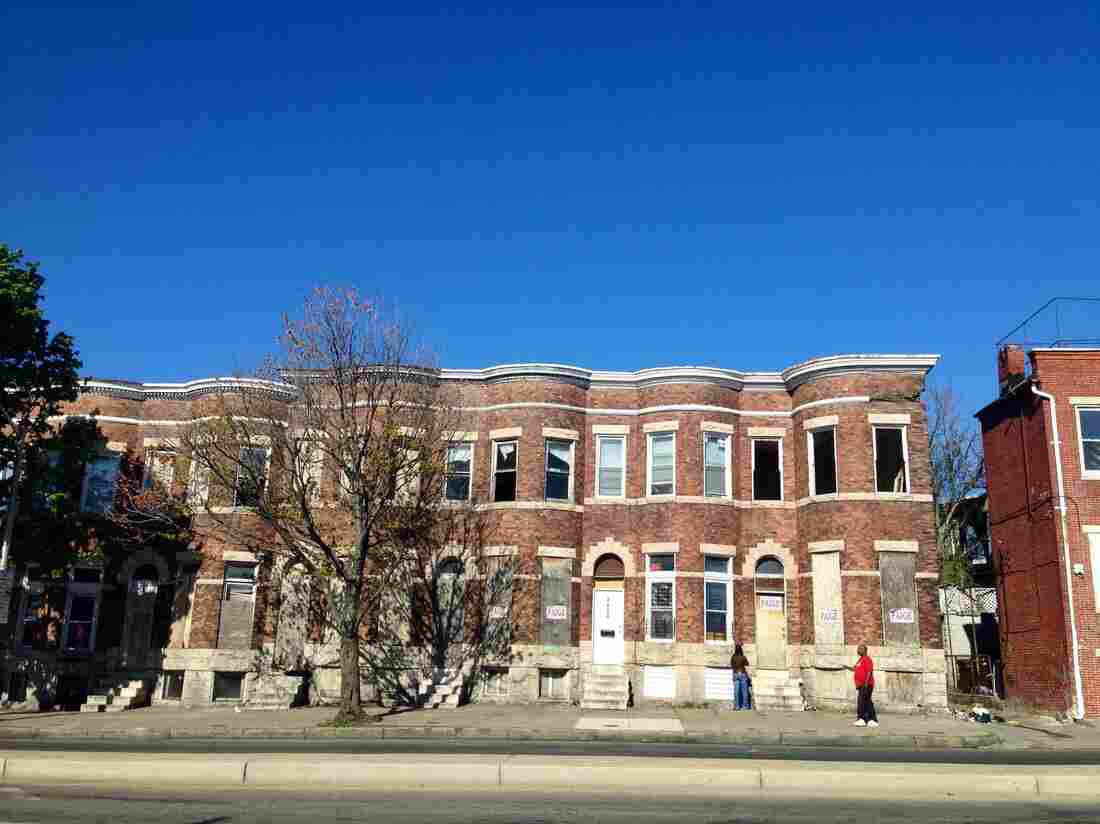 Row houses along West North Avenue in Baltimore. Many of the homes are in disrepair. Eyder Peralta/NPR hide caption

West North Avenue runs perpendicular to Pennsylvania Avenue. The two meet just a few miles from some of the nicest parts of Baltimore. Where the two intersect is also where the bulk of the riots that rocked the city occurred.

The day after the riots, hundreds of volunteers moved in to sweep and pick up. By mid afternoon on Tuesday, the streets had been cleared of debris.

Veronica Boodoo, 52, was sitting on her stoop.

"This is a dead neighborhood," she declared. Sometimes, she said, she doesn't even want to look out her front window, because what she sees is decay.

She sees sagging stoops and broken windows and nothing, she said, changes.

"People ask why do you think they're angry? It's because they have nothing," she said.

The kids go to bad schools, they can't get jobs and on top of that, Boodoo said, police meet them with brutality.

"If they don't have a future at stake, then what have they got to lose?" she said.

Still, on Monday night at the height of the riots, when she could see flames from her front window, Boodoo was terrified.

Yes, the neighborhood has its problems. But she has invested a lot money and time into making her slice of Sandtown-Winchester a better place to live. Not too long ago, she even got the city to plant a tree in front of her house.

So, yes, she was terrified. She was scared that the flames could rob her of her home.