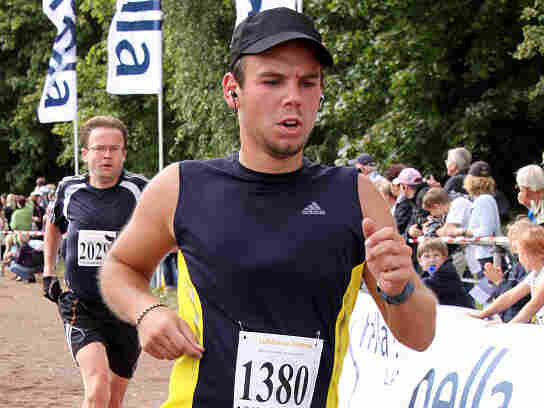 September 13, 2009 photo of Andreas Lubitz, who is believed to have deliberately crashed Germanwings Flight 9525 into a mountain in southern France on March 24, 2015, killing all 150 people on board. Getty Images/Getty Images hide caption 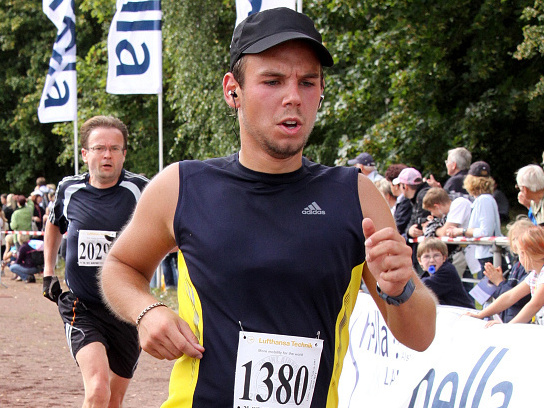 September 13, 2009 photo of Andreas Lubitz, who is believed to have deliberately crashed Germanwings Flight 9525 into a mountain in southern France on March 24, 2015, killing all 150 people on board.

Newly released documents from the U.S. Federal Aviation Administration show that it initially declined to grant a medical certificate to Andreas Lubitz, the pilot who is believed to have intentionally crashed an airline into the French Alps last month.

The documents, obtained under the Freedom of Information Act, provide an eerie glimpse into Lubitz's mental history and an effort to conceal that from U.S. medical examiners.

In the summer of 2010, Lubitz was enrolled in a training program for Lufthansa Airlines. As part of that program, he applied for a U.S. pilot's license so he could continue his training in Arizona, where weather conditions are favorable to flying all year round. But he needed a medical certificate to get a license.

The FAA documents show Lubitz checked "no" in response to an online application question about whether he had been treated for any mental disorders. But a later copy of the questionnaire shows it had been changed to "yes" by the aviation medical examiner after discovering Lubitz had been treated for severe depression a year earlier.

Dr. Warren Silberman, the former head of the FAA's aerospace medical certification unit, told NPR that the aviation administration declined to give Lubitz a medical certificate. But Silberman says Lubitz was offered a chance to clarify things.

"We sent a request for information, saying hey Lubitz, we see here that you had depression, please provide us with a status report," he said.

Lubitz's psychologist in Germany provided the FAA with a letter, translated from German, saying Lubitz had been treated with several drugs for his depression disorders. The psychologist, whose name is redacted, states that Lubitz was "completely recovered."

Silberman says the FAA let Lubitz know he would receive his medical certificate. "Meaning that somebody in the division reviewed the statement from the psychiatrist, thought that it was adequate and cleared him," he said.

The letter warned Lubitz that he would be prohibited from flying if his depression returned.

Lubitz was ultimately able to secure a job as a co-pilot for Germanwings.

As NPR reported earlier, it was discovered after Flight 9525 crashed into the French Alps that Lubitz had been treated for suicidal tendencies, and that investigators found boxes of medication in his home, along with torn up doctor's notes for sick leave, including one note for the day of the crash.

Silberman says in May, members of the Aerospace Medical Association will meet to discuss Lubitz's case. "We're going to get together because of the Germanwings accident and come up, you know, is there anything else we should do now," he says.