Accessibility links
Charges Against 6 Officers In Freddie Gray's Death Range From Murder To Assault : The Two-Way "No one is above the law," Baltimore chief prosecutor Marilyn J. Mosby said as she announced the list of charges. Warrants have been issued for the officers' arrest. 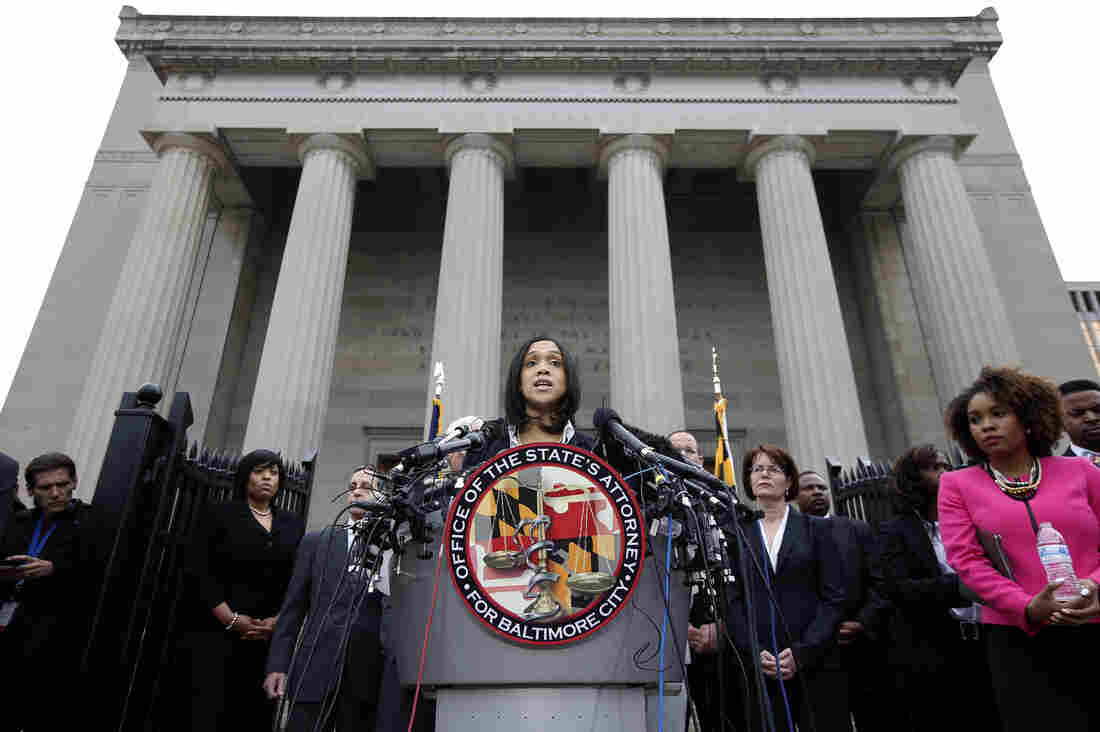 Marilyn Mosby, state's attorney for Baltimore City, announced criminal charges against all six officers in the death of Freddie Gray, who suffered a fatal injury while in police custody. Alex Brandon/AP hide caption 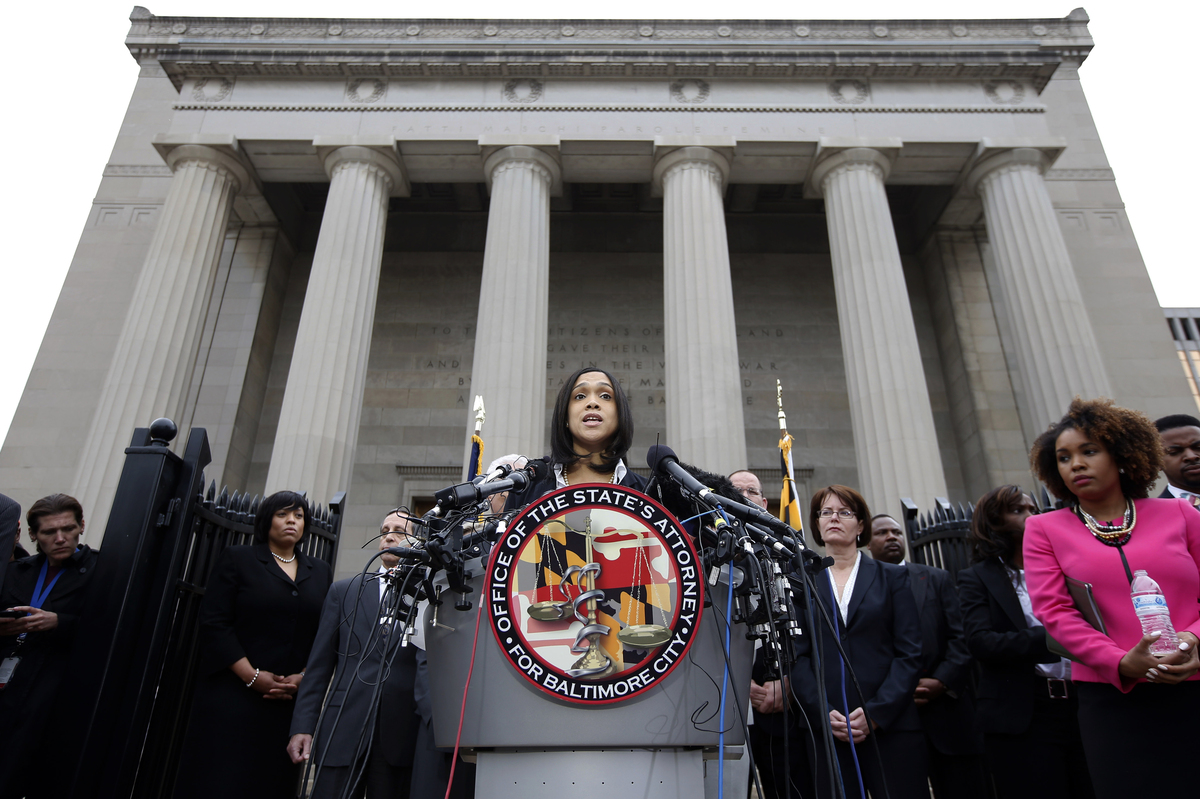 Marilyn Mosby, state's attorney for Baltimore City, announced criminal charges against all six officers in the death of Freddie Gray, who suffered a fatal injury while in police custody.

Mosby announced the charges Friday morning, citing her office's "thorough and independent" investigation and the medical examiner's report on Gray's death. She said warrants were issued Friday for the officers' arrest.

The city's recently elected state's attorney, Mosby detailed a range of charges against the officers, with offenses ranging from one count of second-degree murder and four counts of involuntary manslaughter to assault and misconduct in office.

The most severe charges are leveled against Officer Caesar R. Goodson Jr., identified as the driver of the van that transported Gray to a police station. The charges against Goodson include second-degree depraved heart murder, which carries a maximum penalty of 30 years in prison.

The investigation by the prosecutor's office found there had been no reason to detain Gray — and that his arrest was in itself illegal, Mosby said. She said the knife that police officers found on Gray turned out to be legal.

After announcing the charges, Mosby noted her own ties to the police community — including her mother, father and grandfather, who were police officers. She thanked officers who are committed to serving the community.

We'll have more details from the announcement and any documents released by the prosecutor's office.

Update at 5:28 p.m. ET. Family Is Satisfied With Charges:

Saying they represented an "important step in getting justice for Freddie," Richard Shipley, Gray's stepfather, said that the family was "satisfied" with the charges filed today.

Shipley went on to plea for peace and for the city to get back to work.

"You all know that without justice there is not peace," he said. "But let us have peace in the pursuit of justice."

In a press conference, police union attorney Michael Davey said that Freddie Gray's injuries were not caused by either any action or inaction of any of the police officers charged today.

He said that the prosecutors in this case have rushed to judgement.

He added that the officers will take the case to court and let a jury or a judge make a final determination.

"What I think the people of Baltimore want more than anything else is the truth. That's what people around the country expect." — President Obama, shortly after the prosecutor's announcement.

Citing the requirements of due process, Obama said the Department of Justice is in contact with Baltimore officials, "to make sure that any assistance we can provide on the investigation is provided."

The president spoke to reporters briefly, urging non-violent demonstrations and promising federal agencies will assist Baltimore investigators "to the extent that it's appropriate."

According to a release from the prosecutor's office, four officers are facing manslaughter charges and one faces an additional count of "second degree depraved heart murder." 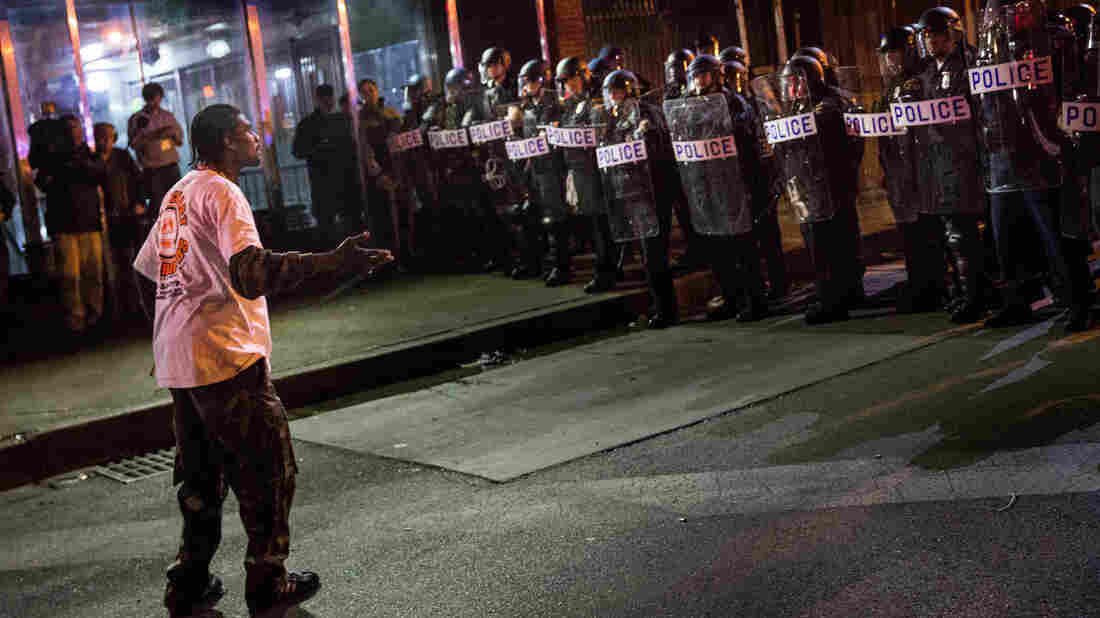 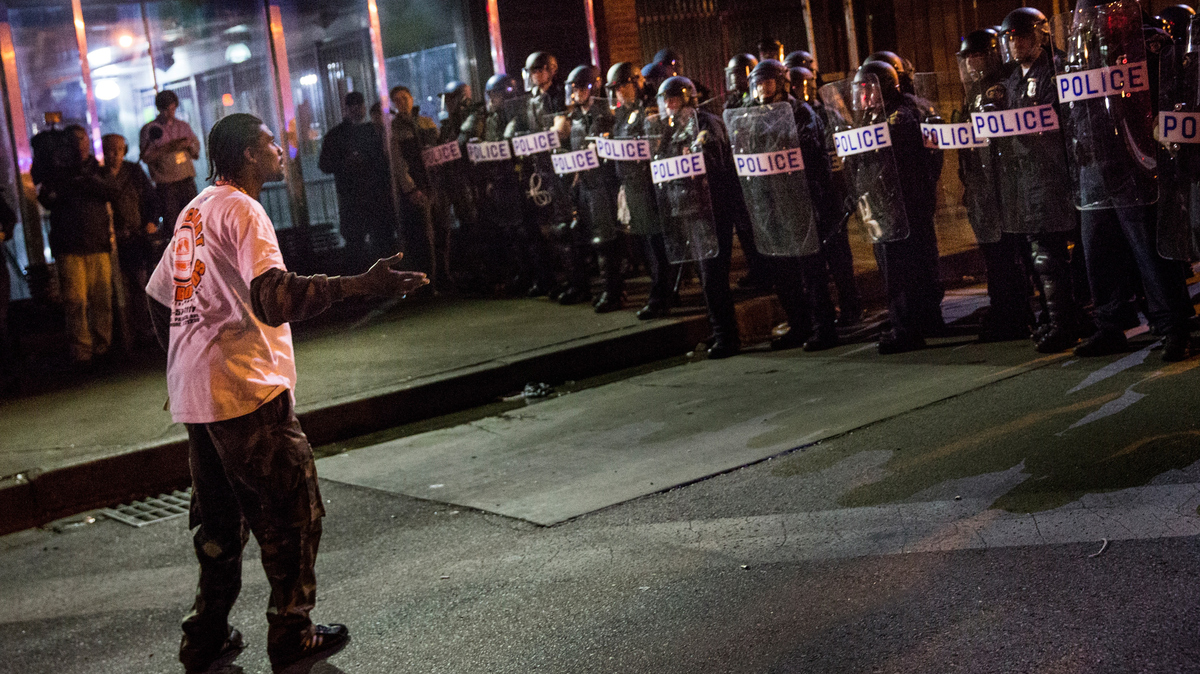 Running down an exhaustive account of Gray's arrest and treatment while in custody, Baltimore's chief prosecutor is listing at least five instances during the transport in which officers had opportunities to properly restrain Gray in the police van. She says the officers failed to do so.

Mosby said that "Mr. Gray suffered a severe and critical neck injury as a result of being handcuffed, shackled by his feet, and unrestrained inside of the BPD wagon."

Mosby said she has assured Gray's family that "no one is above the law," also cited her oath of office, in which she promised "uphold justice."

She said that her review of the case found there had been no reason to detain Gray, and that his arrest was illegal.

The leading prosecutor in Baltimore spoke at a 10:30 a.m. ET news conference held in downtown Baltimore. The occasion brought a large show of force from both police and National Guard personnel who have been called on to secure the area since violence and vandalism broke out Monday night.

Earlier today, the local chapter of the Fraternal Order of Police says it has sent a letter to Mosby, asking her to appoint a special independent prosecutor in the case. The chapter's president alleged that she had "many conflicts of interest" in the case. This morning, Mosby said she would be handling the case herself, adding that the people of Baltimore had elected her.

Mosby spoke one day after receiving the Baltimore Police Department's report on Gray's death. The findings aren't public, and police revealed only a few new details when they announced the transition in the case Thursday.

NPR and other news organizations have asked Baltimore's police department to release its report on the arrest and death of Freddie Gray, as well as for related documents and materials such as tapes of 911 calls made when Gray was taken into custody.

Gray died on April 19, one week after being taken into custody. Police have said that during his transport, Gray wasn't buckled in properly and did not receive timely medical care. Six police officers remain suspended over the case.

As the Two-Way has reported, when police turned over the documents to State's Attorney Marilyn Mosby in Baltimore, they announced that "the van transporting Freddie Gray, the 25-year-old black man who suffered a serious spine injury while in police custody and later died, made one more stop than previously thought."

The roughly 40 minutes that Gray spent in the van have emerged as the focal point in the inquiry over how he sustained the injury.

That extra stop was discovered through a review of recordings made by security and private cameras, Deputy Police Commissioner Kevin Davis said. He added that another detainee who was riding in the van told police that Gray was "still moving around ... kicking and making noises" until the van reached the police station.

That second detainee rode in the police van on the other side of a metal partition that divides its cargo space. When he was picked up, Gray was already in the van.

Local news WJZ-TV reports that Donta Allen, 22, was that second man — and that he came forward Thursday out of concern over how his comments were being portrayed by both the police and the media.

"When I was in the back of that van it did not stop or nothing. All it did was go straight to the station, but I heard a little banging, like he was banging his head," Allen said. " I didn't even know he was in the van until we got to the station."

Saying his words have been distorted by recent reports and that he doesn't think Gray hurt himself intentionally, Allen also told a WJZ reporter, "The only reason I'm doing this is because they put my name in a bad state."

Allen, who was reportedly taken into custody for a minor offense and was not charged with a crime, also spoke to WBAL TV. He told the station that when he got into the van, he didn't know Gray was already there. He said he heard "a little banging for like four seconds."

WBAL aired surveillance camera footage that shows officers looking into Gray's side of the van during the stop that also picked up Allen.

When the van arrived at the police station, Allen said he heard the officers say that Gray didn't have a pulse and was unresponsive — and that another officer later said, "He's got vitals now, he must've come back."

The sequence of events has led to wide-ranging questions over what happened: Was the van driven in a way that caused Gray's injury? When did Gray become unresponsive? Were the sounds Allen heard caused by a seizure experienced by a gravely wounded man?

The Baltimore Sun reports: "Maryland's chief medical examiner, Dr. David R. Fowler, said his office has not completed an autopsy or turned any documents over to police or prosecutors. He said homicide detectives had observed the examination, a routine practice."

When it's complete, Fowler's report will go straight to the state's attorney's office, the newspaper says.

NPR and other news organizations have asked Baltimore's police department to release its report on the arrest and death of Freddie Gray, as well as for related documents and materials such as tapes of 911 calls made when Gray was taken into custody.

Protesters have been calling on police to reveal more information about the case.

Thursday was the third night of Baltimore's 10 p.m.-5 a.m. curfew. Ahead of the deadline, crowds of demonstrators marched downtown amid a large police presence. Baltimore's curfew is expected to remain in effect through this weekend.

According to The Associated Press, here's what protesters were chanting Thursday night: