Accessibility links
Mayweather Outboxes Pacquiao In A Unanimous Decision : The Two-Way The two fighters went 12 rounds but Floyd Mayweather won the welterweight title in Las Vegas Saturday. They each stand to earn millions. 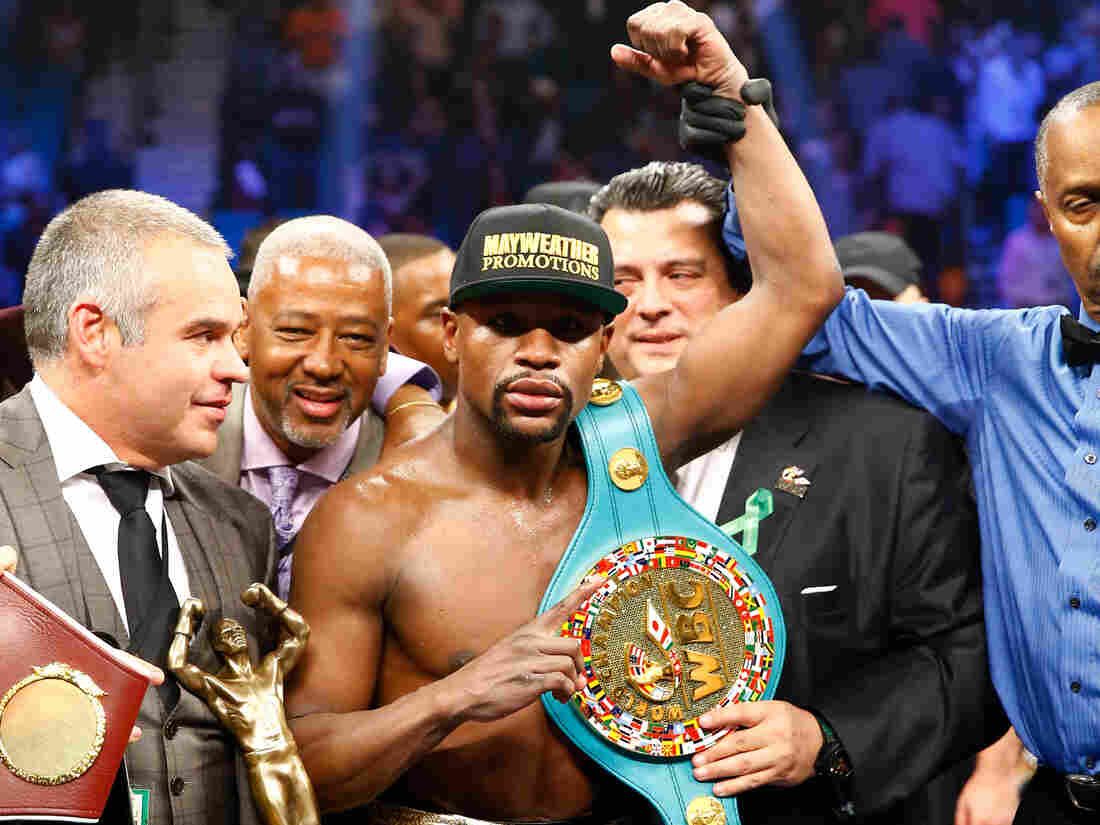 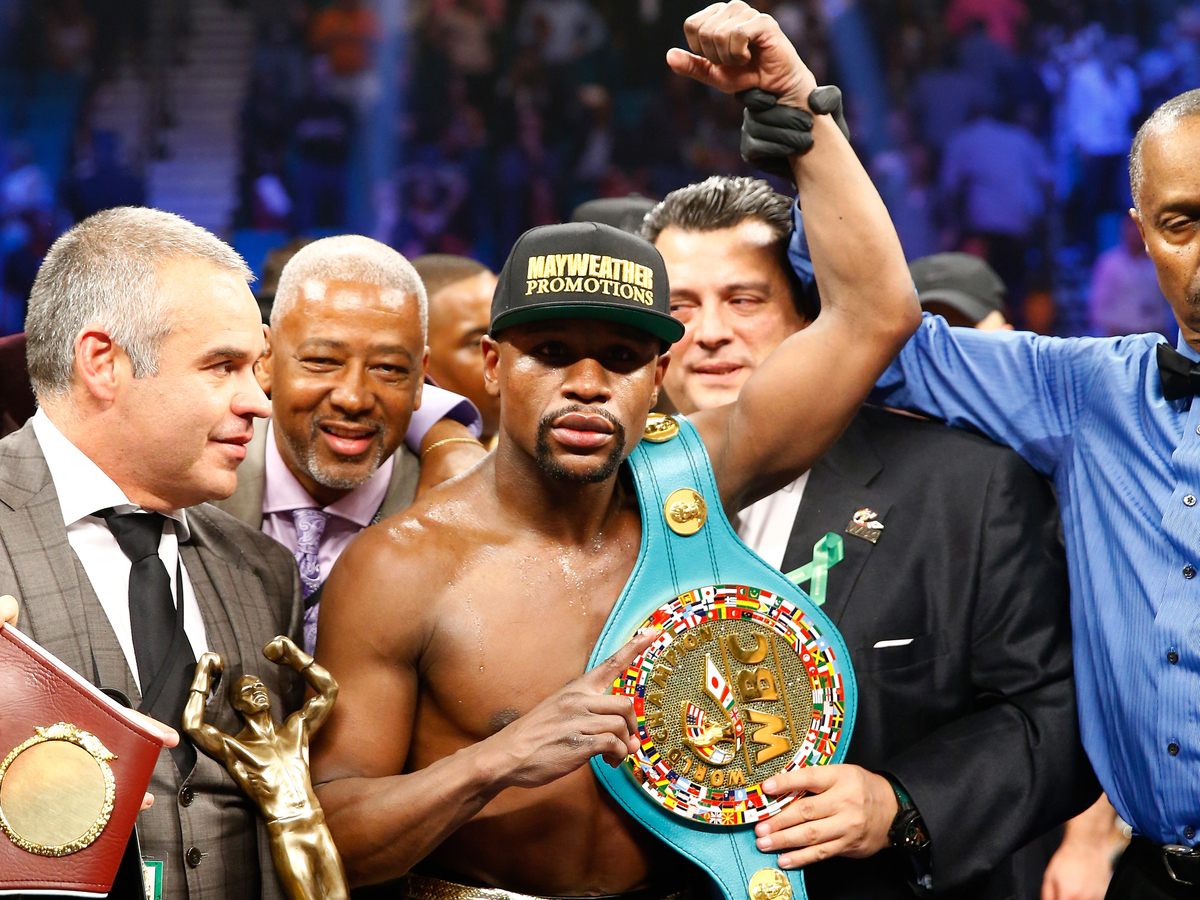 Round By Round Updates

Round 12: Over. Defense wins championships. Mayweather superior strategist. Just foiled everything Pacquaio threw at him. With 10 seconds left in round, Mayweather raises right arm and pumps it in celebration.

Round 11: Mayweather looking more aggressive, actually going after Pacuqaio. Mayweather smacks gloves together, looks confident. Pacquaio has to score KO here or it's over.

Round 10: A Mayweather-controlled round. Seems to have won last few rounds. Pulling away on points perhaps. Pacquiao going to have to do something dramatic to win this.

Round 9: A lot of sizing up in middle of ring. No major blows landed. Tiring both?

Round 8: Good counterpunch right by Pacquiao; some wild swings by Pacquaio. Mayweather dancing away a lot preventing. Pacquiao from burrowing inside with a quick attack.

Round 7: Pacquiao gets in one good left but no flurries like he's been doing; close fight so far. No one has a big advantage.

Round 6: Pacquiao relentless in this round. Lands some good punches. Throws a flurry a couple of times. Mayweather covers up then shakes his head a a if to say no prob

Round 5: Pacquiao inactive backed off a bit. No fireworks in this round.

Round 4: This is Pacquaio's round, lands major blows and Mayweather covers up on the ropes. Pacquaio scores big punches. Best round yet.

Round 2: Pacquaio still not able to launch a good attack. Good defense by Mayweather, who also went on the attack a little. Will Pacquaio get frustrated by not landing a lot of punches?

Floyd Mayweather Jr.maintained his unbeaten record with a unanimous decision victory over Manny Pacquaio in their unified welterweight megabout in Las Vegas on Saturday.

The 38-year-old American made a surprisingly strong start, then withstood some aggressive counter-punching by the Filipino southpaw in the later rounds as he improved his career record to 48-0.

Mayweather, known for his defensive prowess, was able to tie up Pacquaio and escape him, with quick movements around the ring. He landed some big punches himself, at times turning into the aggressor in the fight. But in the end proved to be the superior strategist,

Pacquaio, famous for his aggression, darting position and ability to move in and throw flurries of rapid-fire, powerful punches, was not able to do that Saturday.

It was a fairly convincing victory, although afterwards, Pacquaio said he thought he had won. Whether he really believed that, or if it was just the competitor in him talking, we don't know.

The opponents hugged after the fight.

Floyd Mayweather Jr. and Manny Pacquiao, who have have been circling one another in negotiations for six years, entered the ring Saturday for what was billed as the fight of the century.

Pacquiao, a congressman from the Philippines, bounced around the ring as he was introduced, raising his arms high and then kneeling down to pray, as people in the crowd waved Philippine flags.

Then Mayweather made his way through to the ring, looking deadly serious.

After official introductions, the fighters tapped gloves and the match was underway.

It may be the match of this young century, but the contest has undeniable historical significance for more prosaic reasons: It will have the biggest-ever purse, not to mention the highest price-tag of any pay-per-view — at $99.95 a pop.

Win or lose, Mayweather will take home 60 percent of the bout's total revenue, and Pacquiao 40 percent — which, according to some estimates, may be $180 million and $120 million respectively.

Mayweather and Pacquiao present a contrast in styles. Pacquiao has made his mark as an aggessor in the ring. He relies on his speed and quickness with his punches and his movement. He's a left hander, which can prove difficult for opponents because the punches are coming from different positions and angles.

Boxing experts say that could be key for Pacquiao tonight — can he attack and confuse Mayweather with those angles?

If he does, chances are the confusion won't last long. Mayweather is considered one of the best, if not the best, at making adjustments mid-fight to turn things to his advantage. Mayweather's strength is his defense. He uses his famous shoulder roll to avoid opponent's punches. Then his quickness allows him to fire accurate and powerful counterpunches.

Pacquiao trainer Freddie Roach says it's key for his fighter to not get caught "in the pocket" — that area of space created when Mayweather retreats or shoulder rolls — because Mayweather can attack that pocket so quickly from a defensive position. So for Pacquiao, it's key to get in and get out.

Mayweather said, about an hour before the match, that he spend the day resting and watching TV with his kids.

"I've been here before," he said on the pay-per-view broadcast. "Not nervous or worried. Work is done. Now, time to go out and entertain."

He said it was hard to start training for this fight, but once he got to gym he didn't stop.

"Do I love sport of boxing like I once did?" he said. "Absolutely not."

Asked how he was feeling one hour before the fight, Pacquiao said, "Excited, because I have something to prove. Because I'm an underdog. Friday I thanked Floyd at weigh-in for making fight finally happen."

For many fans, picking a favorite for the welterweight title fight has more to do with personality than boxing prowess: It is either underdog "Pacman" Pacquiao, the congressman from the Philippines, or the brash, undefeated American Mayweather, who has a history of domestic abuse and reportedly has blocked two female reporters who have written about the issue from covering the big fight.

Hours before the fight was scheduled to begin, crowds were lining up outside the MGM Grand Hotel Garden Arena. Some were hoping to secure a highly prized ticket. Resold tickets have been going for thousands of dollars apiece, but ESPN reports that single ticket prices have been dropping as the fight nears.

As NPR's Frank Deford opined earlier this week: "Whatever you may think about boxing, this particular match has become the tackiest sports event this side of hot-dog eating. All of the pre-fight talk has been about money, money, money. Mayweather has a mouthguard worth $25,000 and it's made of hundred dollar bills. Meanwhile, Phillipine firms are paying to clutter up Pacquiao's trunks with more than $2 million worth of advertisements. It's safe to say that he's hitting it big below the belt."

Despite the hype (and, many say, over-hype), BoxingJunkie.com notes: "These are the top two pound-for-pound fighters in the world. Mayweather (47-0, with 26 KOs) is 38, lives in Las Vegas and claims he has just two fights left, which is when his six-fight, $200 million contract with Showtime runs out. Pacquiao, 36, from the Philippines, is 57-5-2 (38 KOs). He is under contract to HBO."

And, The Associated Press writes:

"Their styles have been analyzed endlessly and their minds dissected as much as possible. And it still remains anyone's guess just what kind of fight this will be.

"[There are 3-1 odds] that the fight will go at least until late in the 12th round. The argument can be made that Mayweather hasn't legitimately knocked out an opponent since he stopped Ricky Hatton in 2007, and feels no pressure to do so with Pacquiao despite a payday that will likely be at least $180 million."