Accessibility links
University Of Virginia Dean Sues 'Rolling Stone' Over Discredited Rape Article : The Two-Way U.Va.'s dean of students says the article portrayed her as the "chief villain of the story." She's suing the magazine and the author for $7.85 million. 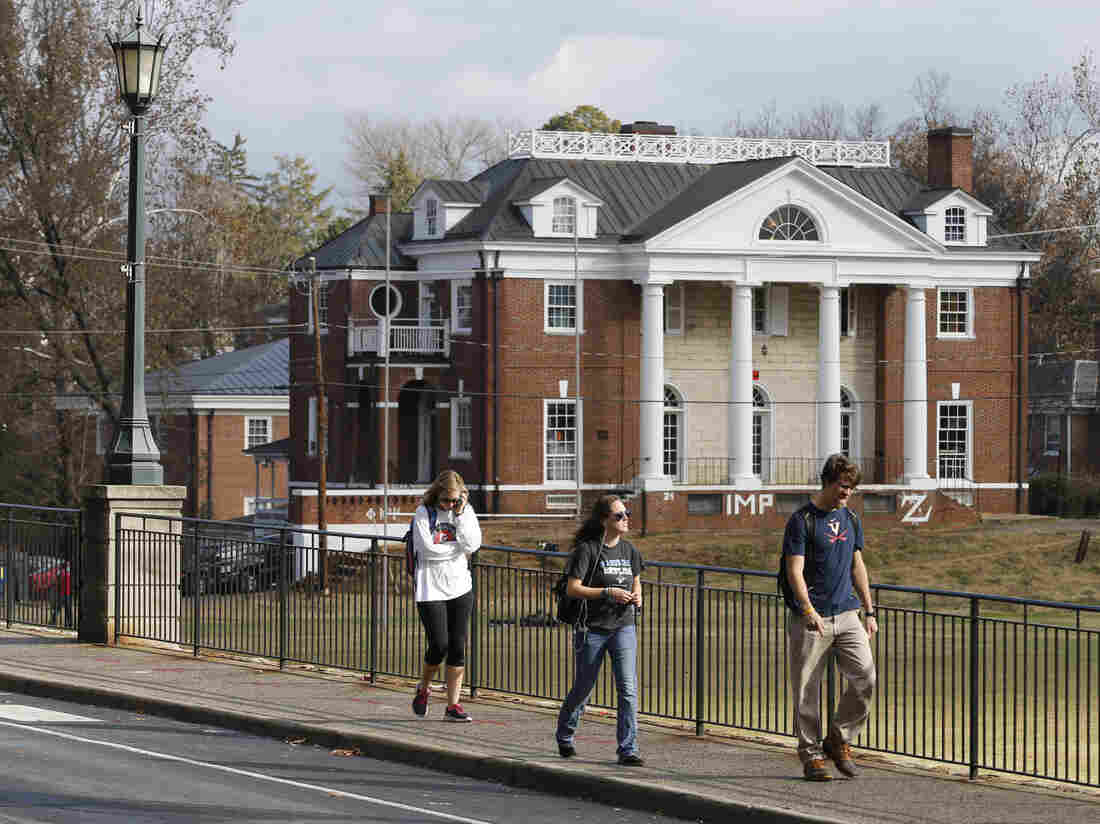 The Phi Kappa Psi fraternity house at the University of Virginia in Charlottesville, Va. That fraternity was implicated in a now discredited Rolling Stone story about a rape on campus. A dean named in the piece is suing the magazine for $7.85 million. Phi Kappa Psi says it will also sue the magazine. Steve Helber/AP hide caption 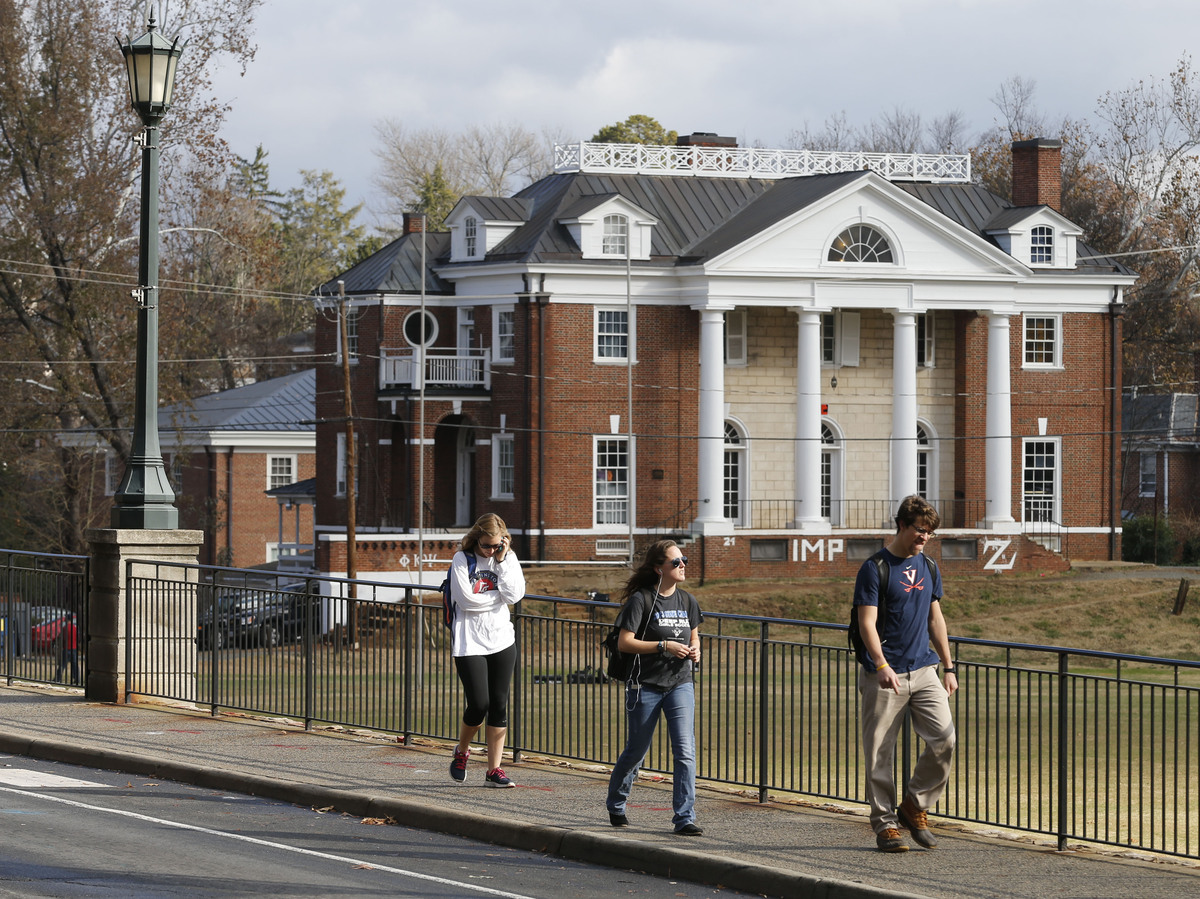 The Phi Kappa Psi fraternity house at the University of Virginia in Charlottesville, Va. That fraternity was implicated in a now discredited Rolling Stone story about a rape on campus. A dean named in the piece is suing the magazine for $7.85 million. Phi Kappa Psi says it will also sue the magazine.

Nicole P. Eramo, an associate dean of students at the University of Virginia who handles reports of sexual assault for the school, is suing Rolling Stone magazine over the way she was depicted in a now discredited story.

Eramo has filed suit against Rolling Stone LLC, parent company Wenner Media LLC, and Sabrina Rubin Erdely, the author of the article called "A Rape on Campus," which painted a harrowing picture of a rape and its coverup at U.Va. The complaint was filed in the Charlottesville, Va., circuit court. Eramo is seeking a total of $7.85 million.

In her complaint, Eramo says, "Defendants' purpose in publishing the article was to weave a narrative that depicted the University of Virginia ('UVA') as an institution that is indifferent to rape on campus, and more concerned with protecting its reputation than with assisting victims of sexual assault."

"Erdely and Rolling Stone claimed — both in the article and in a slew of media appearances and interviews designed to increase publicity for the article — that Dean Eramo intentionally tried to coddle Jackie to persuade her not to report her rape; that she was indifferent to Jackie's allegations; that she discouraged Jackie from sharing her story with others; that she 'abuse[d]' Jackie; that she did 'nothing' in response to Jackie's allegations; that she claimed that UVA withholds rape statistics 'because nobody wants to send their daughter to the rape school'; that she did not report Jackie's alleged assault to the police; that she 'brushed off' Jackie; and that she actively sought to 'suppress' Jackie's supposed gang rape. ... These statements, and the portrayal of Dean Eramo, in 'A Rape on Campus' and in Erdely and Rolling Stone's subsequent public statements, are categorically false."

The complaint alleges that since the story's publication, Eramo has received letters and emails from across the country calling her things like "evil," a "wretched rape apologist" and a "disgusting, worthless piece of trash."

At one point in the article, which has been deleted from Rolling Stone's website but still lives on various Web archival sites, Erdely says Eramo told the rape victim in the story that U.Va. failed to publish all of its data on campus sexual assault "because nobody wants to send their daughter to the rape school." The piece also suggested that Eramo gently urged female victims of sexual assault on campus not to go public or file reports with authorities.

NPR has previously reported on the Rolling Stone article and its retraction. After questions arose about the piece, and news outlets such as the Washington Post began to challenge many of its facts, Rolling Stone commissioned an independent review of the piece from the Columbia University Graduate School of Journalism.

That review said the article was "a story of journalistic failure that was avoidable." The report continued:

"The failure encompassed reporting, editing, editorial supervision and fact-checking. The magazine set aside or rationalized as unnecessary essential practices of reporting that, if pursued, would likely have led the magazine's editors to reconsider publishing Jackie's narrative so prominently, if at all. The published story glossed over the gaps in the magazine's reporting by using pseudonyms and by failing to state where important information had come from."

In early April of this year, Phi Kappa Psi, the fraternity implicated in the article, also said it would sue Rolling Stone, pursuing "all available legal action against the magazine."