Accessibility links
Engineer Applied Emergency Brake Before Fatal Amtrak Derailment : The Two-Way An NTSB board member says the train was traveling at 106 mph while making a turn in a 50-mph zone. Tuesday night's derailment in Philadelphia claimed seven lives; dozens were injured. 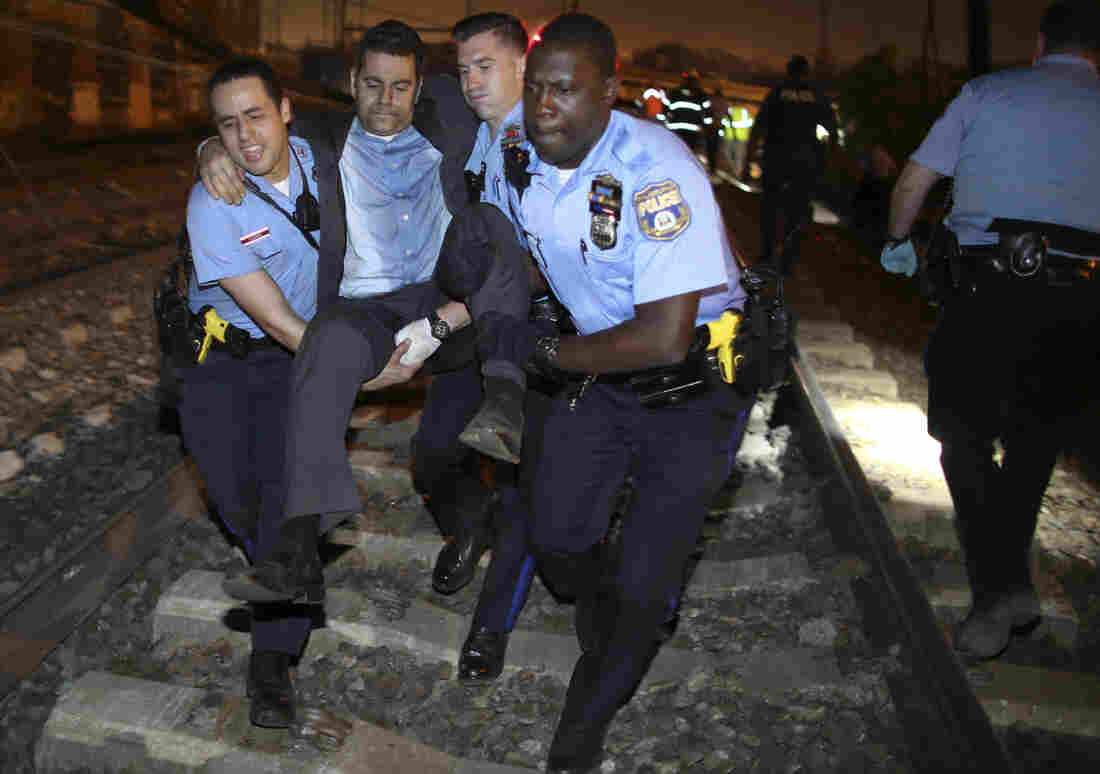 Emergency personnel help a passenger at the scene of a train wreck, Tuesday, in Philadelphia. Joseph Kaczmarek/AP hide caption 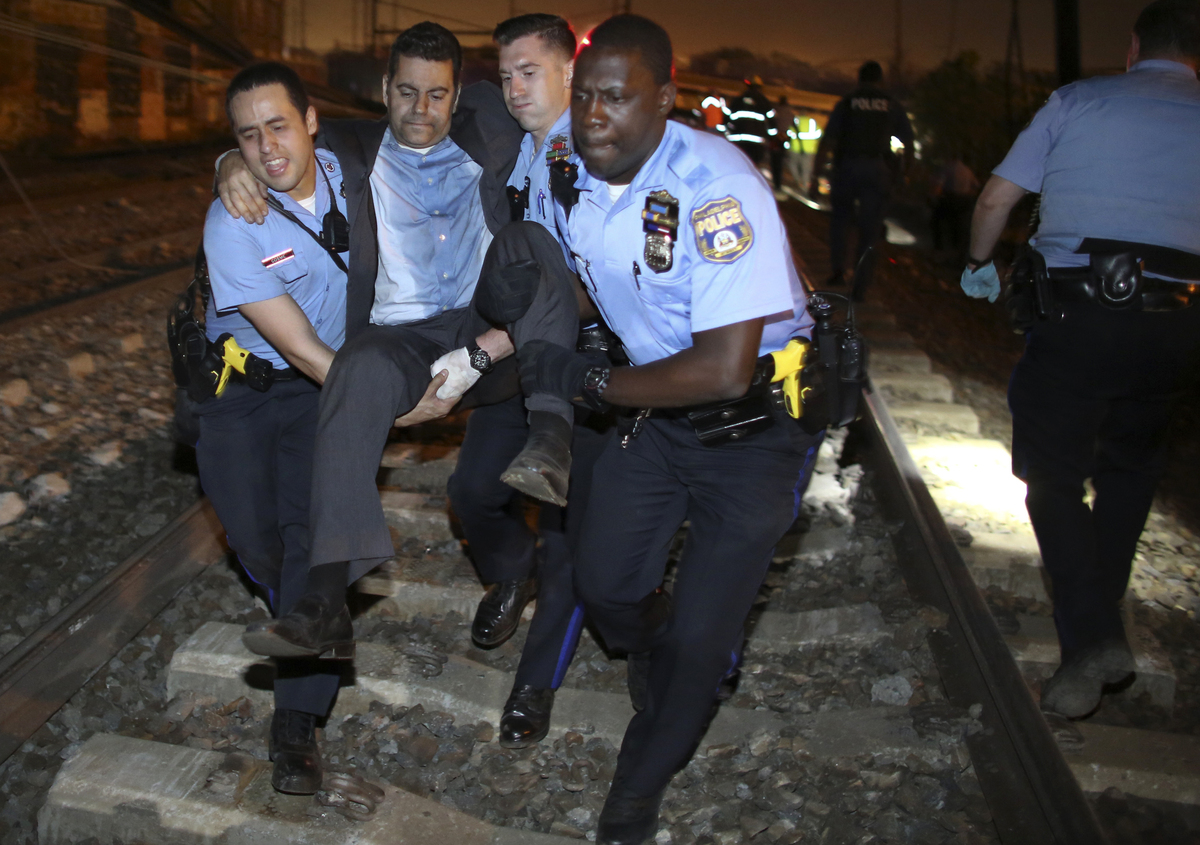 Emergency personnel help a passenger at the scene of a train wreck, Tuesday, in Philadelphia.

The engineer of Amtrak Northeast Regional Train 188 that was traveling at 106 mph in a 50-mph zone in Philadelphia applied the full emergency braking system moments before the derailment that claimed seven lives and caused dozens of injuries, the National Transportation Safety Board said.

The data are preliminary, but "we're pretty confident" of the numbers, NTSB board member Robert Sumwalt said at a news conference Tuesday evening.

The derailment of the train with 238 passengers and five crew resulted in seven deaths and dozens of injuries, Philadelphia Mayor Michael Nutter said. A multidisciplinary team is examining the track, signals, operations, recorders, survival factors and emergency response, Sumwalt said.

Earlier, the Federal Railroad Administration says the speed limit in that section of track is 70 mph; the limit at the corner where the train derailed is 50 mph. Sumwalt said the speed limit for the preceding section was 80 mph.

"One of the key focuses of this investigation is going to be the speed of the train," NPR's David Schaper tells All Things Considered.

The train, which was headed to New York City from Washington, D.C., derailed in the Port Richmond area of Philadelphia. Officials have not yet indicated what caused the derailment.

Amtrak canceled service between New York and Philadelphia. The Philadelphia Inquirer reports this is believed to be the deadliest crash along the Northeast Corridor since 1987, when a passenger train collided with a freight train and killed 16 people near Baltimore.

Four victims have been identified so far. A Wells Fargo spokeswoman said company executive Abid Gilani was killed in the derailment; Rachel Jacobs, the CEO of an online learning company, was also among the victims, her family said. The Associated Press identified a third victim, Jim Gaines, a video software architect with the news service. The U.S. Naval Academy said the fourth victim was Justin Zemser, a 20-year-old midshipman from New York City.

We'll update this post with the latest news as it develops.

Mayor Michael Nutter, in an interview with CNN, called the engineer on the train "reckless and irresponsible."

The train derailed at approximately 9:21 p.m. ET Tuesday while traveling through a left-hand turn, he said.

Moments before the derailment, the train was placed into "engineer-induced braking," with full brake application, he said. Three seconds later, data to the event recorder terminated. The train was traveling at 102 mph, he said.

Sumwalt said the train's event recorder and forward-facing video and event recorder are both being sent to the NTSB lab in Washington. He said the investigating team would interview the crew, analyze recorder data and conduct other tests.

The agency said it will provide more details at a 5 p.m. news conference.

Mayor Michael Nutter confirms that seven people have died in the accident. He said officials are notifying the next of kin. About 243 were on the train, he said, but that number could change.

He said the train's engineer was injured in the accident, received medical attention and provided a statement to the police department. Nutter said a "vigorous and active" search was being conducted at the scene of the derailment.

NPR member station WHYY reports that police have confirmed a seventh death in the accident.

Philly.com reports that a "a body was found in the wreckage on Wednesday."

During a press conference, Philadelphia Mayor Michael Nutter said that investigators had recovered the train's event recorder, or black box, and sent it to Delaware for analysis.

"We have no information from that particular device at all" yet, Nutter said.

Robert Sumwalt, an NTSB board member, said that box would be key in the investigation because it would give a readout of how fast the train was traveling or if the engineers had braked or sped up.

Sumwalt said authorities would be providing more details later in the afternoon.

Nutter said that area hospitals had treated more than 200 people. He said they are still trying to find some people on the passenger manifesto provided by Amtrak.

An NTSB team is now the scene, the agency said in a tweet. We are awaiting a 10 a.m. briefing from Mayor Nutter.

That brings the death toll in the derailment to six.

Cushing said that most of the injuries were fractures to the arms, legs and ribs.

He said that 25 people were treated and released from that hospital and 25 additional people were still at the hospital. Eight patients, said Cushing, are in critical condition.

Officials have not yet indicated what caused the derailment. Philadelphia Mayor Michael Nutter was asked if the train was going too fast.

"The only thing I can tell you is the one obvious thing and the one known fact — there is a curve," Nutter said. "We have no idea what kind of speed we're talking about, what else happened out there and I'm not going to speculate on it."

From NPR, here's what service along the Northeast Corridor will look like today: