Accessibility links
B.B. King, Legendary Blues Guitarist, Dies At 89 : The Two-Way The great bluesman was inducted into the Rock and Roll Hall of Fame in 1987 and toured relentlessly his whole life, wringing peerless emotion out of every note he played. 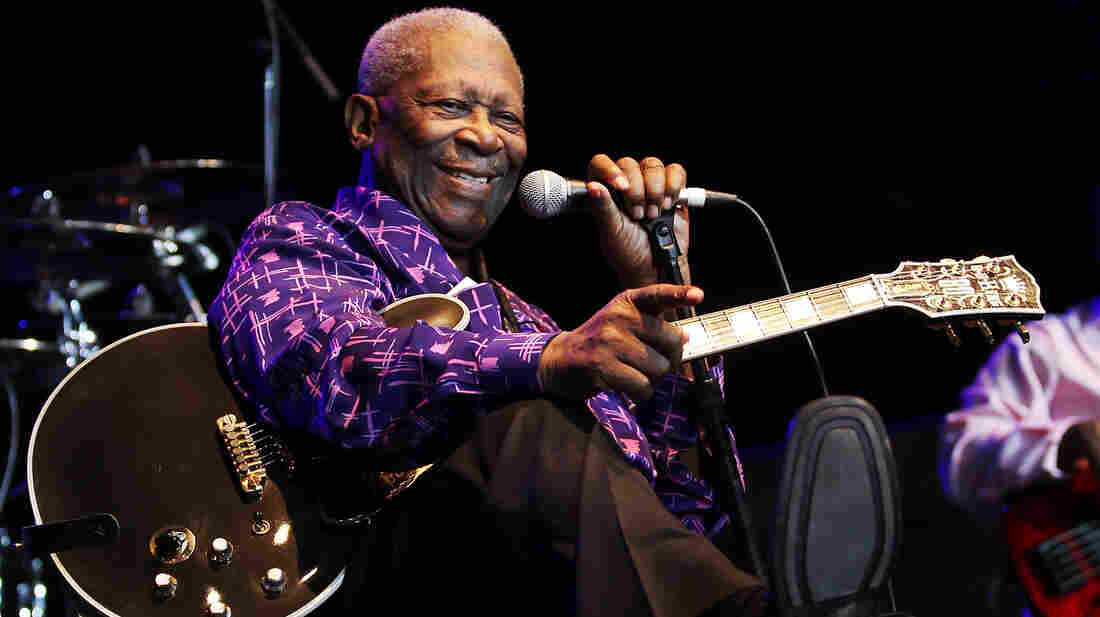 It seemed as if he'd go on forever — and B.B. King was working right up until the end. It's what he loved to do: playing music, and fishing. Even late in life, living with diabetes, he spent about half the year on the road. King died Thursday night at home in Las Vegas. He was 89 years old.

He was born Riley B. King on a plantation in Itta Bena, Miss. He played on street corners before heading to Memphis, Tenn., where he stayed with his cousin, the great country bluesman Bukka White. His career took off thanks to radio; he got a spot on the radio show of Sonny Boy Williamson II, then landed his own slot on black-run WDIA in Memphis. He needed a handle. At first it was Beale Street Blues Boy. Then Blues Boy King. Finally B.B. King stuck.

You can't mention names without talking about his guitar, Lucille. It was actually more than one. The story goes that the first was a $30 acoustic he was playing at a dance in Arkansas when two men got in a fight, kicked over a stove and started a fire. When King was safe outside, he realized he'd left the guitar inside. He ran back into the burning dance hall to save it. After he learned the fight had been over a woman named Lucille, he decided to name his guitar for her to remind himself never to get into a fight over a woman. And since then, every one of his trademark Gibson ES-355s has been named Lucille.

The sound he got out of her was what set him apart. Playing high up on the neck, he'd push a string as he picked it, bending the note to make it cry. He didn't burn a lot of fast licks, but you could feel each note he played. Nobody sounded like B.B. King, though later on plenty of rockers tried. (Fleetwood Mac's Peter Green got closest.)

King scored an R&B hit in 1951 with "Three O'Clock Blues" and began the next stage of his life as a touring musician. According to his website, King and his band played 342 one-night stands in 1956. He performed more than 250 nights a year into his 80s, his distinctive guitar sound and smooth vocals filling just about every major venue in the U.S. and abroad. In 1991, he opened his own spot, B.B. King's Blues Club in Memphis. Others followed, and King remained involved in how they were run.

He was inducted into the Blues Foundation Hall of Fame in 1984 and the Rock and Roll Hall of Fame in '87. He was so beloved that he received honorary degrees from the Berklee College of Music as well as Yale and Brown universities, among others.

In 1970, he scored a crossover hit with "The Thrill Is Gone." It's the tune everyone knows — classic B.B. King: Lucille's piercing single notes punctuating each phrase.

That pretty well sums up how a lot of fans are feeling right now, now that B.B. King is finally gone.