Accessibility links
First In Fish: 'Fully Warmblooded' Moonfish Prowls The Deep Seas : The Two-Way "It's hard to stay warm when you're surrounded by cold water but the opah has figured it out," a NOAA Fisheries biologist says. 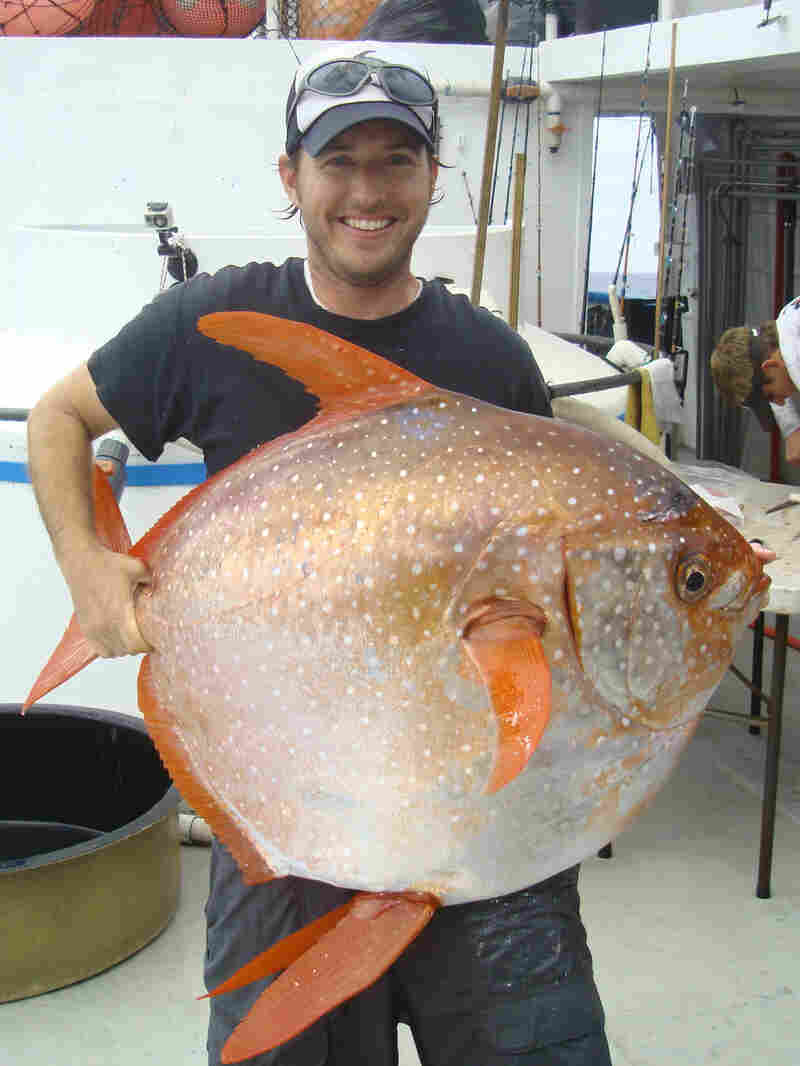 NOAA Fisheries biologist Nick Wegner holds an opah caught during a research survey off the California coast. Researchers say the opah is the first fish known to be fully warmblooded, circulating heated blood throughout its body. NOAA/Reuters/Landov hide caption 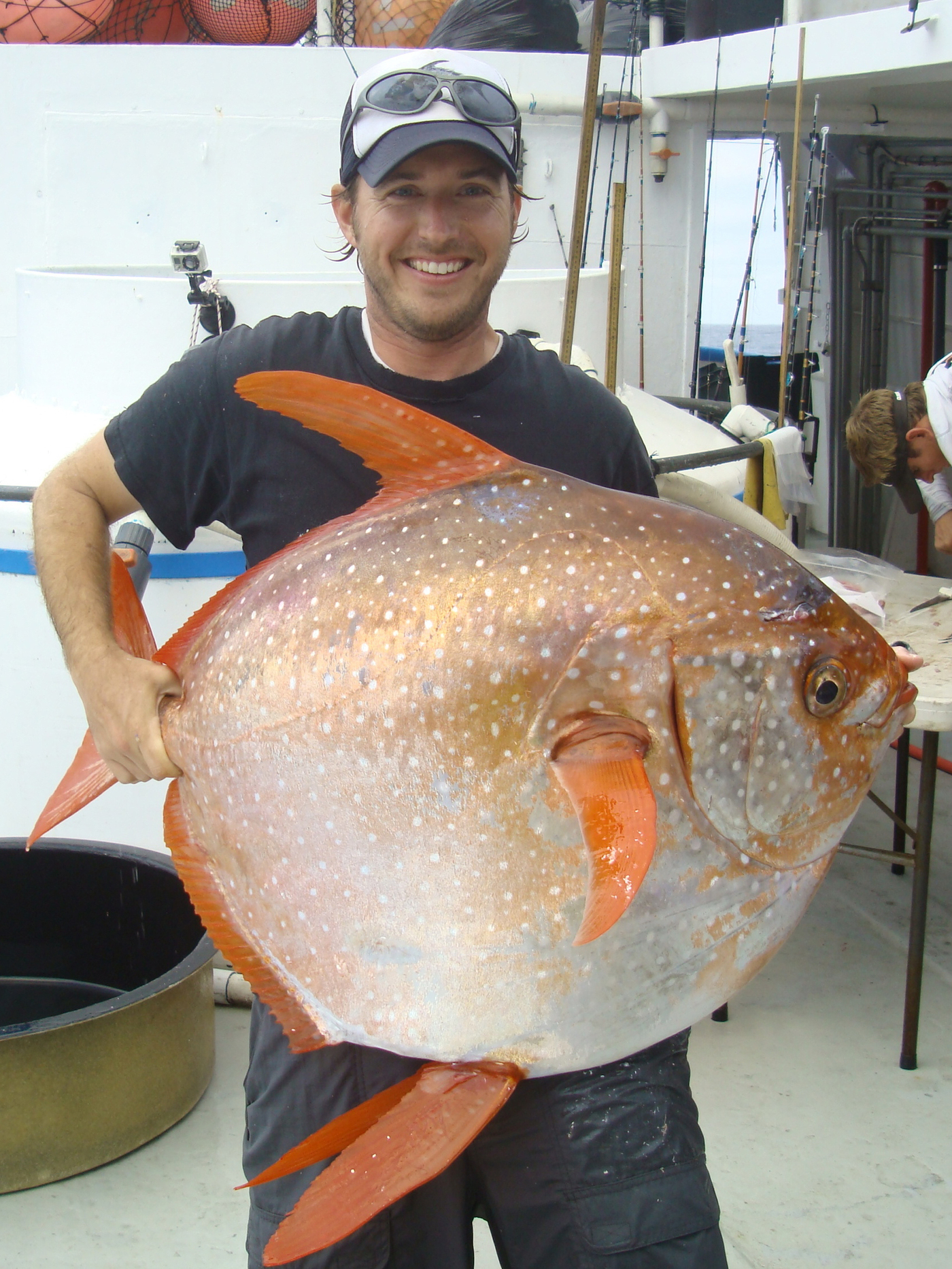 NOAA Fisheries biologist Nick Wegner holds an opah caught during a research survey off the California coast. Researchers say the opah is the first fish known to be fully warmblooded, circulating heated blood throughout its body.

Over decades of studying the oceans' fishes, some species have been found to have partial warmbloodedness. But scientists say the opah, or moonfish, circulates heated blood — and puts it to a competitive advantage.

"Nature has a way of surprising us with clever strategies where you least expect them," according to NOAA Fisheries biologist Nicholas Wegner, who works in the Southwest Fisheries Science Center in La Jolla, Calif. In a news release about the finding, Wegner said, "It's hard to stay warm when you're surrounded by cold water, but the opah has figured it out."

The opah is not a small animal; it's roughly the size of a car tire and often weighs more than 100 pounds. In the past, it was often viewed as a fairly complacent dweller of water that's hundreds of feet deep.

Now researchers say the opah also uses internal warmth to help it move quickly and efficiently — and kill prey such as squids and smaller fish. As the researchers describe in the journal Science, the fish relies on an internal heating system that seems to have been developed in frigid waters.

From the National Oceanic and Atmospheric Administration Fisheries:

"Satellite tracking showed opah spend most of their time at depths of 150 to 1,300 feet, without regularly surfacing. Their higher body temperature should increase their muscle output and capacity, boost their eye and brain function and help them resist the effects of cold on the heart and other organs, Wegner said.

"Fatty tissue surrounds the gills, heart and muscle tissue where the opah generates much of its internal heat, insulating them from the frigid water."

Heat is generated from the opah's large wing-like pectoral fins, which were previously thought only to help it swim fast enough to catch prey.

The agency's researchers say they found an unexpected design tweak in the opah's gills that sets it apart from other fish: a countercurrent heat exchange in which blood vessels carrying warm blood are twined around vessels that are bringing oxygen — and cold temperatures — from the gills. The design helps the opah maintain endothermy (warmbloodedness).

"The fish had an average muscle temperature about 5 degrees C [roughly 9 degrees Fahrenheit] above the surrounding water while swimming about 150 to 1,000 feet below the surface," NOAA says.

Revelations about the opah's blood temperature come after a moonfish was captured in a striking photograph off the California coast earlier this year, an encounter that was seen as part of a surge in opah sightings off the Western U.S. coast.

Opah have more commonly been spotted in Hawaii — including at fish auctions.

Of the flavor, National Geographic has reported:

"Opah are unusual in that different parts of their body look and taste different, the biologist explains. The upper part of the fish looks like tuna and tastes like a cross between tuna and salmon, he says. But their pectoral muscles — the ones that power the fins on the side of the body — look and taste a bit like beef."

In a previous correction on this post, we corrected something that was actually correct. So we have corrected that correction. It had to do with Celsius temperatures.