Accessibility links
Penn State Bounces Fraternity For 3 Years Over Nude Photo Scandal : The Two-Way Penn State has shut down the Kappa Delta Rho fraternity chapter for three years, after an inquiry over a Facebook group page that collected pictures of nude women uncovered other transgressions. 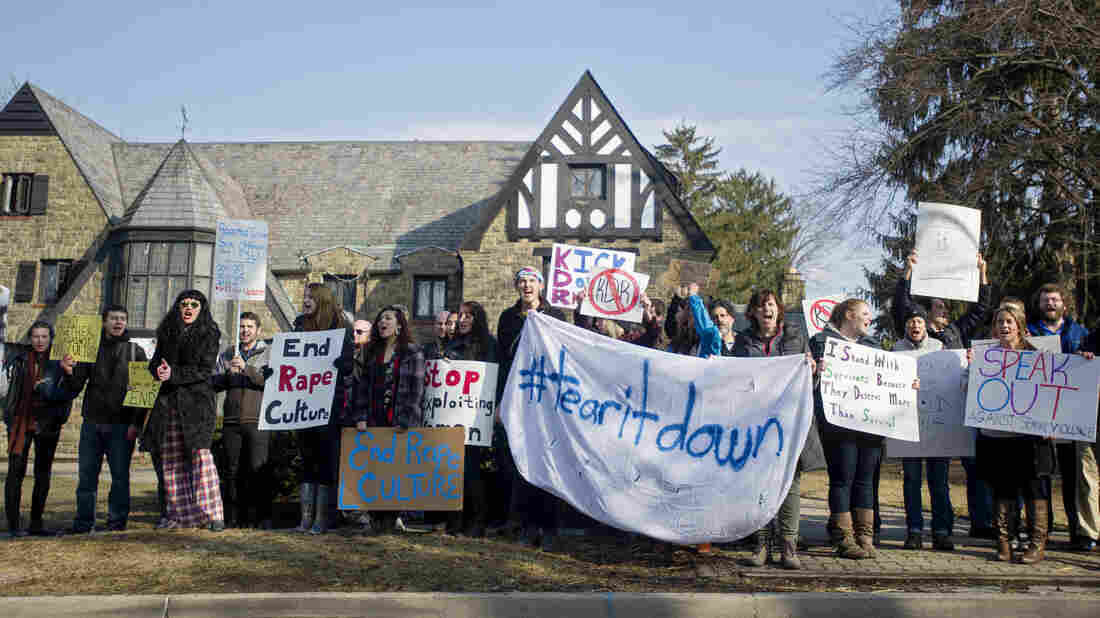 After news broke in March of a private Facebook page that collected nude photos of women, protesters gathered outside Kappa Delta Rho fraternity at Penn State. The school has banned the chapter for three years. Abby Drey/TNS/Landov hide caption 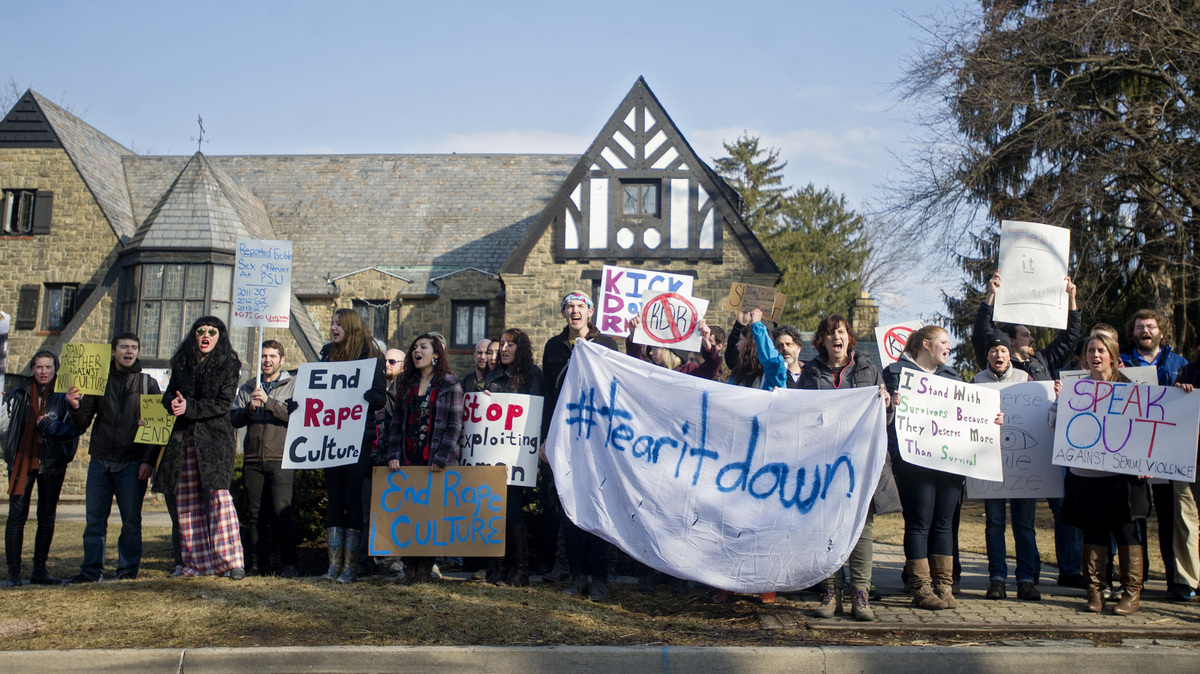 After news broke in March of a private Facebook page that collected nude photos of women, protesters gathered outside Kappa Delta Rho fraternity at Penn State. The school has banned the chapter for three years.

Tripling a penalty that was announced this spring, Penn State has shut down the school's Kappa Delta Rho fraternity chapter for three years, after an inquiry over a Facebook group page that collected pictures of nude women also uncovered other transgressions.

"The suspension is based on an investigation after reports in March that fraternity members were posting photos to a private Facebook page that showed nude women, some of whom appeared unconscious," member station WPSU reports. "The investigation also revealed hazing and drug dealing."

From the national fraternity's statement:

"We agree completely that the conduct described in the statement is unacceptable. As stated in the Report of the Inter Fraternity Council (IFC), only a few of our members were accused of such misconduct. As we outlined previously, we have initiated disciplinary proceedings against members accused of any wrongdoing, and have established educational programs and other measures, such as a hazing hotline, to address and prevent future misconduct."

The three-year ban comes two months after Penn State suspended Kappa Delta Rho for one year. At the time, Emily Chappell, the opinions editor of campus newspaper The Daily Collegian, told NPR's Scott Simon that the problems found at the fraternity went far beyond one house, or one school.

Here's some of their conversation:

"CHAPPELL: We were shocked and disgusted when this information came out. You know, one of our first editorials was just somewhat emotional — us explaining that we are very frustrated that this has happened. We are disgusted. These actions are vile, and we, as a student newspaper, are putting our foot down. We're not going to stand for it. As more information has unfolded, specifically the anonymous interview that came out in Philadelphia magazine - that was another topic of one of our editorials.

"SIMON: I don't know that story.

"CHAPPELL: An anonymous member of the fraternity was interviewed by Philadelphia magazine. And went on to discuss that he didn't think that what was happening was a big deal, that people were being unfairly prosecuted by the media and blamed for things that had been happening for years, that are happening everywhere. You know, people just having some fun, and we were just livid with what was said."

Of the school's report that came out Tuesday afternoon, WPSU's Emily Reddy reports, "The university says pledges were forced to 'run errands, clean the fraternity house, and participate in boxing matches.' They were also forced to hold a plank position with bottle caps under their elbows."

Penn State says, "Pledges also were made to create stories containing pornographic images and a 'sex position of the day;' members regularly posted embarrassing photos of women; used demeaning language to describe females; and cultivated a persistent climate of humiliation for several females."