Accessibility links
Supreme Court Tosses Out Man's Conviction For Making Threats On Facebook : The Two-Way The messages Anthony Elonis posted to Facebook prompted his now ex-wife to get a state protection order against him, and led his bosses to fire him. 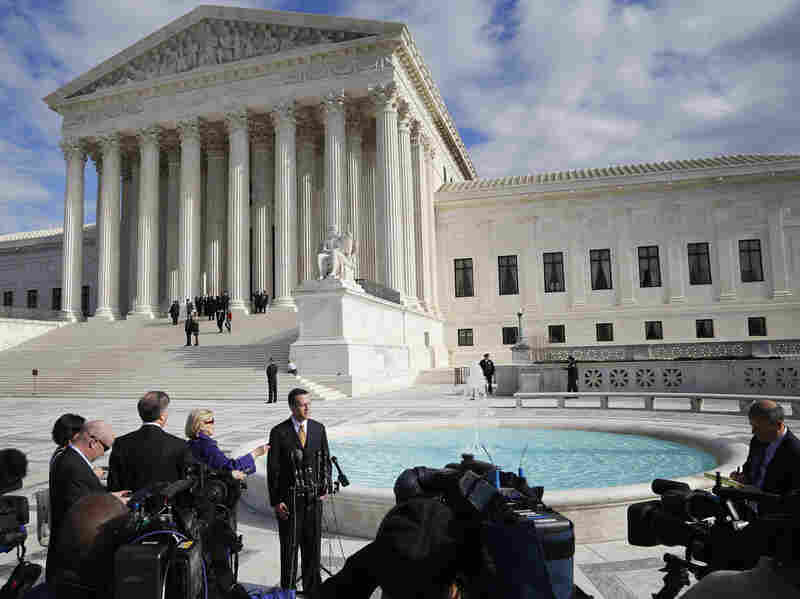 The case of Anthony Elonis, who was convicted in 2010 of making violent threats on Facebook, was argued at the Supreme Court in December. Here, an advocate for victims' rights speaks with reporters about the case. Jonathan Ernst/Reuters /Landov hide caption 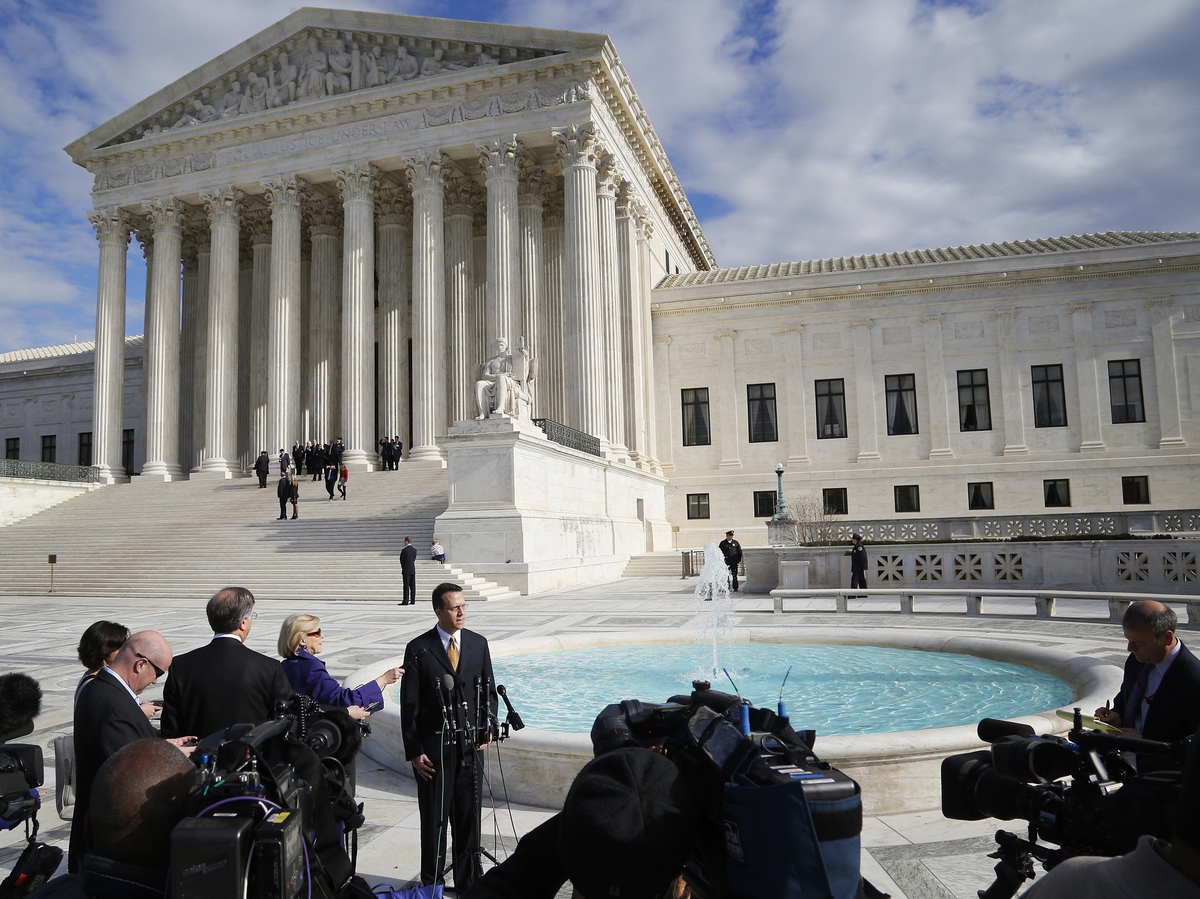 The case of Anthony Elonis, who was convicted in 2010 of making violent threats on Facebook, was argued at the Supreme Court in December. Here, an advocate for victims' rights speaks with reporters about the case.

The Supreme Court has reversed the conviction of a Pennsylvania man who said violent messages he posted on Facebook were therapeutic, not true threats. Anthony Elonis was arrested by the FBI, which had been monitoring his posts.

At issue is the standard by which a lower court viewed rap lyrics and messages from Elonis, who often posted graphically violent language along with disclaimers that he was merely asserting his First Amendment rights.

As we reported last year, Elonis began posting violent messages after his wife of seven years left him in 2010. The messages he posted to Facebook prompted Elonis' now ex-wife to get a state protection order against him, and led his bosses to fire him from his job at an amusement park.

Elonis was charged with threatening his wife, a kindergarten class and law enforcement officers — including a female agent who visited his house to question him. All were subjects of rap-style lyrics he posted to Facebook, under the pseudonym Tone Dougie.

A jury convicted him on those counts, and Elonis was sentenced to more than three years in prison.

In court, the jury had been instructed to consider whether the government had proved that a reasonable person would view the messages as a threat. But Elonis sought a stricter standard that includes his state of mind: whether he had meant to issue a "true threat." On Monday, the court agreed with Elonis.

The justices returned the case to the lower court for further proceedings.

Here's one example of Elonis' Facebook postings, quoted by the Supreme Court on Monday:

"Fold up your [protection-from-abuse order] and put it in your pocket
Is it thick enough to stop a bullet?
Try to enforce an Order that was improperly granted in the first place
Me thinks the Judge needs an education on true threat jurisprudence
And prison time'll add zeros to my settlement . . .
And if worse comes to worse
I've got enough explosives
to take care of the State Police and the Sheriff 's Department."

"At trial, Elonis testified that his posts emulated the rap lyrics of the well-known performer Eminem, some of which involve fantasies about killing his ex-wife. App. 225.

"In Elonis's view, he had posted 'nothing ... that hasn't been said already.' Id., at 205. The Government presented as witnesses Elonis's wife and co-workers, all of whom said they felt afraid and viewed Elonis's posts as serious threats."

In his opinion, Alito faulted the majority for providing what he says is "only a partial answer."

"The Court holds that the jury instructions in this case were defective because they required only negligence in conveying a threat. But the Court refuses to explain what type of intent was necessary. Did the jury need to find that Elonis had the purpose of conveying a true threat? Was it enough if he knew that his words conveyed such a threat? Would recklessness suffice? The Court declines to say. Attorneys and judges are left to guess."

Thomas agreed with that sentiment, saying that the court's "failure to decide throws everyone from appellate judges to everyday Facebook users into a state of uncertainty."