Accessibility links
Day 2 Of G-7 Meeting Focuses On Climate Change, Terrorism : The Two-Way The first day was dominated by talks on Russia, which was left out of the meeting for the second straight year. President Obama declared that the U.S. was "inseparable" from its European allies. 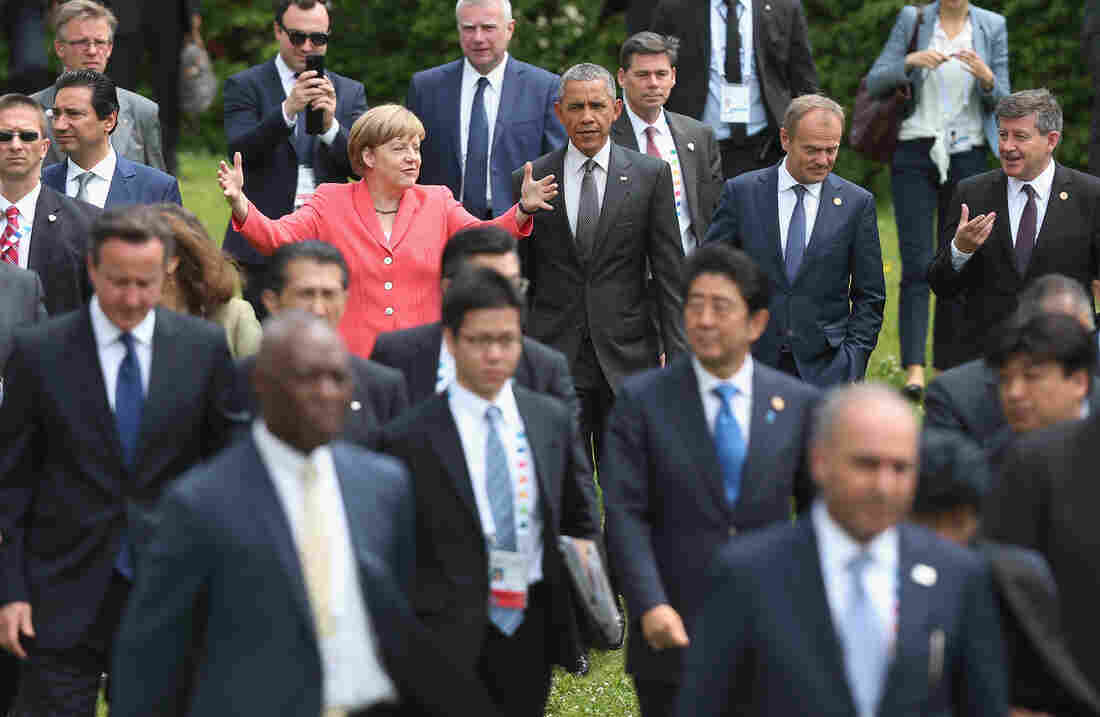 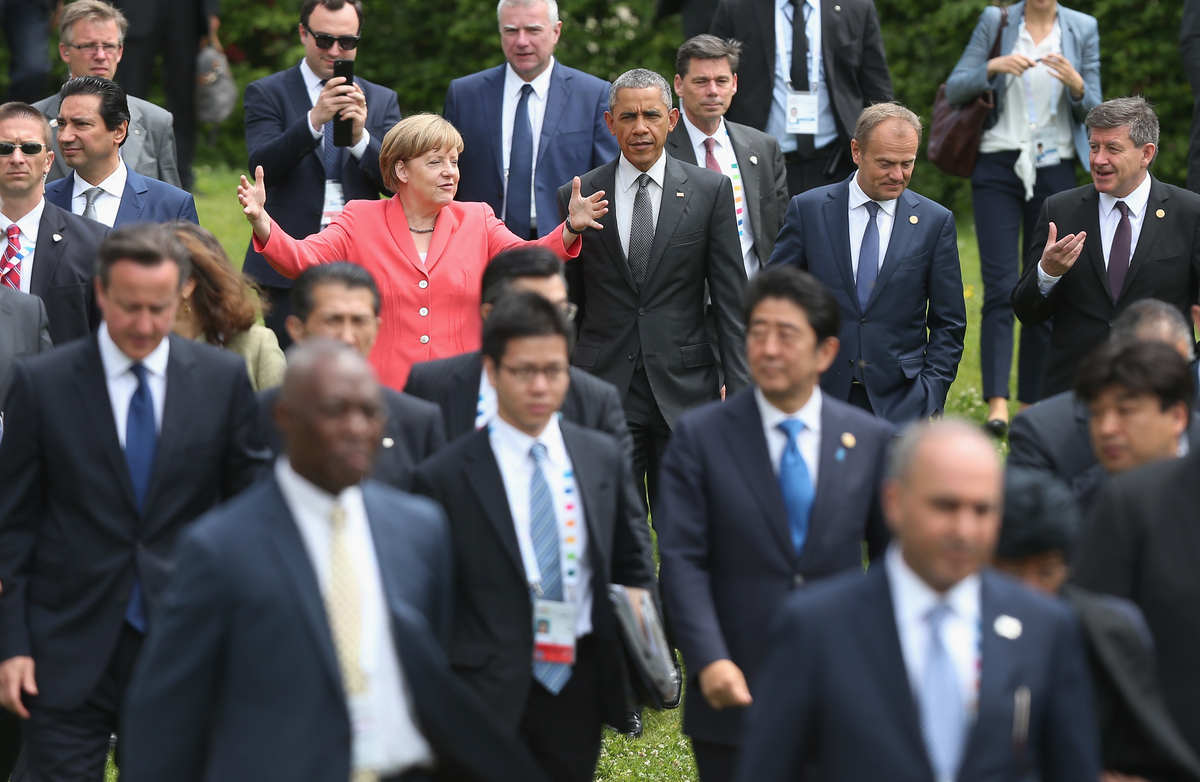 German Chancellor Angela Merkel, President Obama and other G-7 leaders arrive for the second day of the summit on Monday.

The second and last day of the G-7 summit in Germany today will focus on climate change and terrorism.

"Chancellor Angela Merkel wants the group to reach an agreement on limiting global temperature rises. She also wants G-7 members to contribute to a fund for poor countries suffering the worst effects of climate change.

"There will also be talks on the threat from radical extremism with the leaders of Nigeria, Tunisia and Iraq.

"The summit is being held at the picturesque Schloss Elmau hotel in Kruen in the Bavarian Alps."

As we reported, the first day of the summit was dominated by talks on Russia. This is the second year in a row the country has been left off the invite list because of its annexation of Crimea.

During a speech, President Obama urged the Western leaders to stand up to "Russian aggression" in Ukraine. Then, Obama declared that the U.S. was "inseparable" from its European allies.

Deutsche Welle, Germany's international broadcaster, reports that Iraqi Prime Minister Haider al-Abadi and Nigeria's new president have also been invited to the talks. Abadi is expected to talk about the ongoing war against the so-called Islamic State.

"Abadi will also meet privately with US President Barack Obama to discuss the Washington-led campaign to help recover Iraqi territory lost to IS.

"Nigeria's newly-elected President Muhammadu Buhari will ask the G7 for more help in fighting an insurgency by Boko Haram militants. There have been at least 11 separate attacks that have left more than 90 dead in the week since he took office.

"Other topics up for discussion include Japan's concerns over Chinese aggression in the South China Sea; the proposed free-trade agreement between the US and EU, known as the Transatlantic Trade and Investment Partnership (TTIP); and lessons learned from the recent Ebola crisis in West Africa."

During a press conference in Krun, Germany, President Obama said that the G-7 agreed that sanctions will remain in place against Russia as long as the country "continues to violate its obligations under the Minsk Agreement."

The Western leaders, Obama added, also discussed the possibility of putting in place further sanctions if Russia "working through separatists, doubled down on aggression inside Ukraine."

Obama spoke for about 40 minutes. Here are some highlights:

-- On the fight against the so-called Islamic State, Obama said the coalition is making progress, but they have to do a better job of training Iraqi forces.

He said the U.S. and its allies want to accelerate the recruitment and the training of Iraqi forces.

"We don't yet have a complete strategy because it requires commitments on the part of the Iraqis on how recruitment takes place, on how training takes place," Obama said.

-- On the recent hacking at the Office of Personnel Management, Obama said they were not prepared to say publicly who was behind the attack.

He said, however, that this is part of a larger problem that is only going to get bigger, so the government will continue to try to strengthen its cybersecurity posture.

"This is gonna be a big project," Obama said. "Because both state and non-state actors are sending everything they got to try to breach these systems."

-- On the possibility that the U.S. Supreme Court could gut Obamacare with an upcoming decision, President Obama said the administration did not have a plan B.

"This should be an easy case," Obama said. "Frankly, it probably should have never been taken up."

The case is King v. Burwell. Our friends at Shots have a primer.