Accessibility links
Some Answers To Your Questions About California Water Use : The Two-Way Conserving water in California, as the state endures its fourth year of drought, is mandatory. But just who has to save how much can vary.

Some Answers To Your Questions About California Water Use

Some Answers To Your Questions About California Water Use 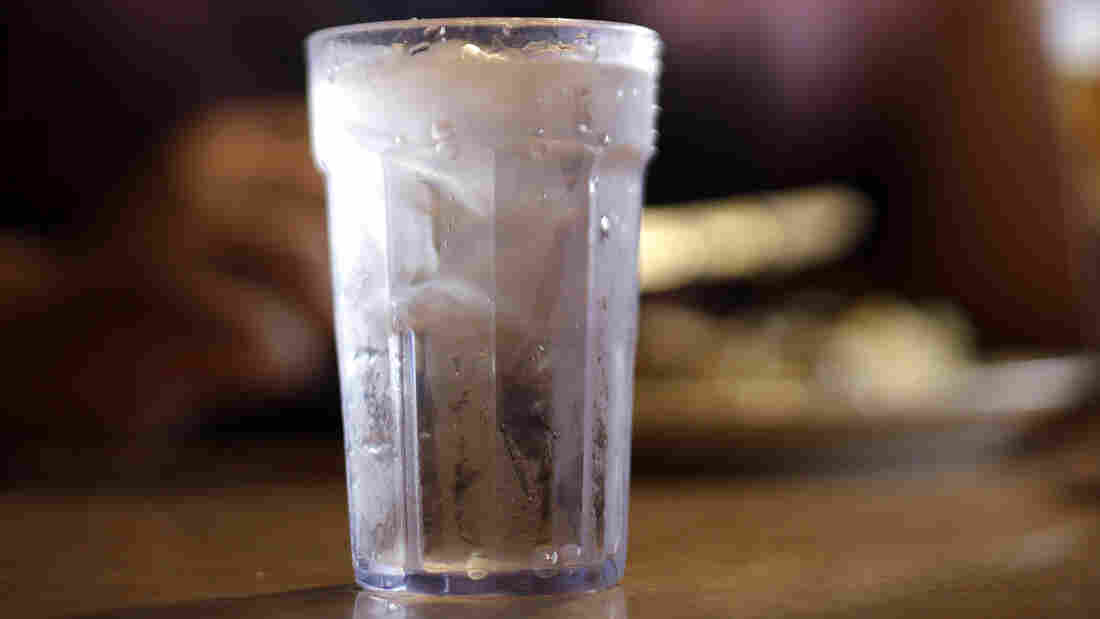 Drought-stricken California hopes to save some water by not serving it to restaurant patrons who don't ask for it. Other water-conservation measures aren't so straightforward. Paul Sancya/AP hide caption 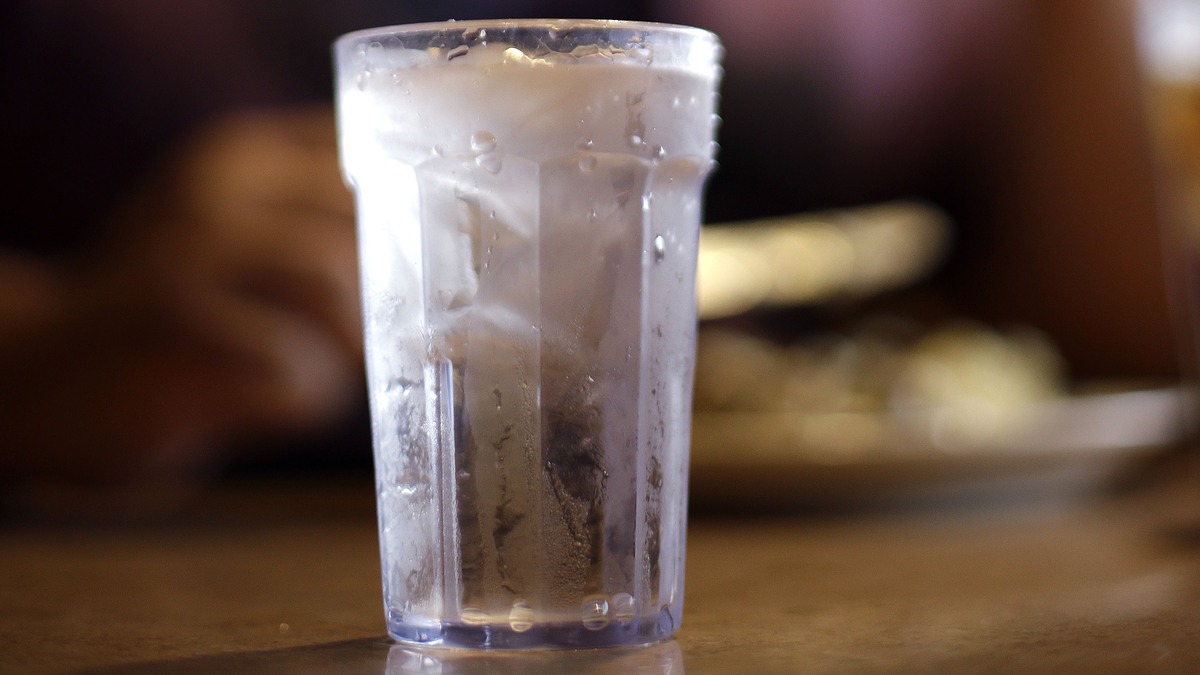 Drought-stricken California hopes to save some water by not serving it to restaurant patrons who don't ask for it. Other water-conservation measures aren't so straightforward.

As California endures its fourth year of drought, water restrictions are taking effect across the state. On April 1, Governor Jerry Brown signed an executive order implementing a mandatory 25 percent water cutback in cities and towns across the state from 2013 usage levels. It took effect June 1.

Brown's executive order, and the hundreds of other water guidelines throughout the state, can be confusing. NPR asked listeners what questions they have about California water restrictions. We took those questions to experts to get to the bottom of what all these rules actually mean.

For some background, you can read NPR's coverage of that April executive order here: 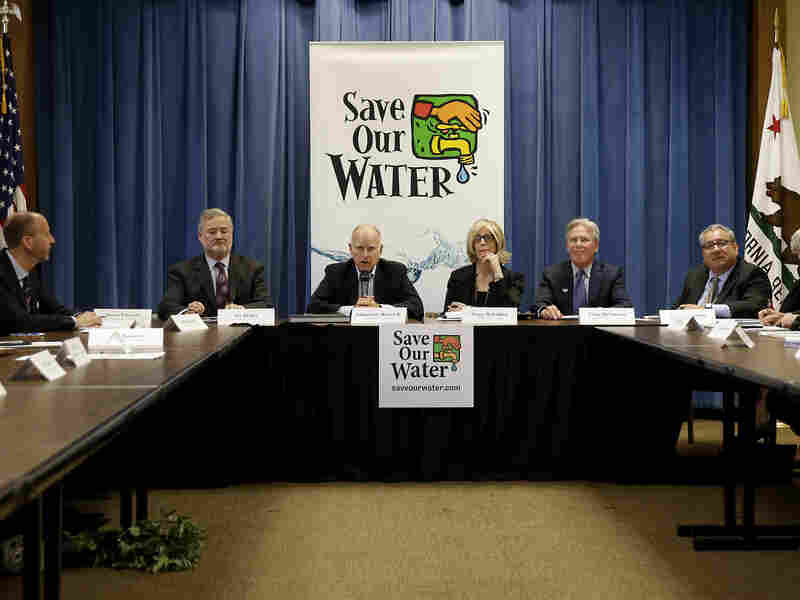 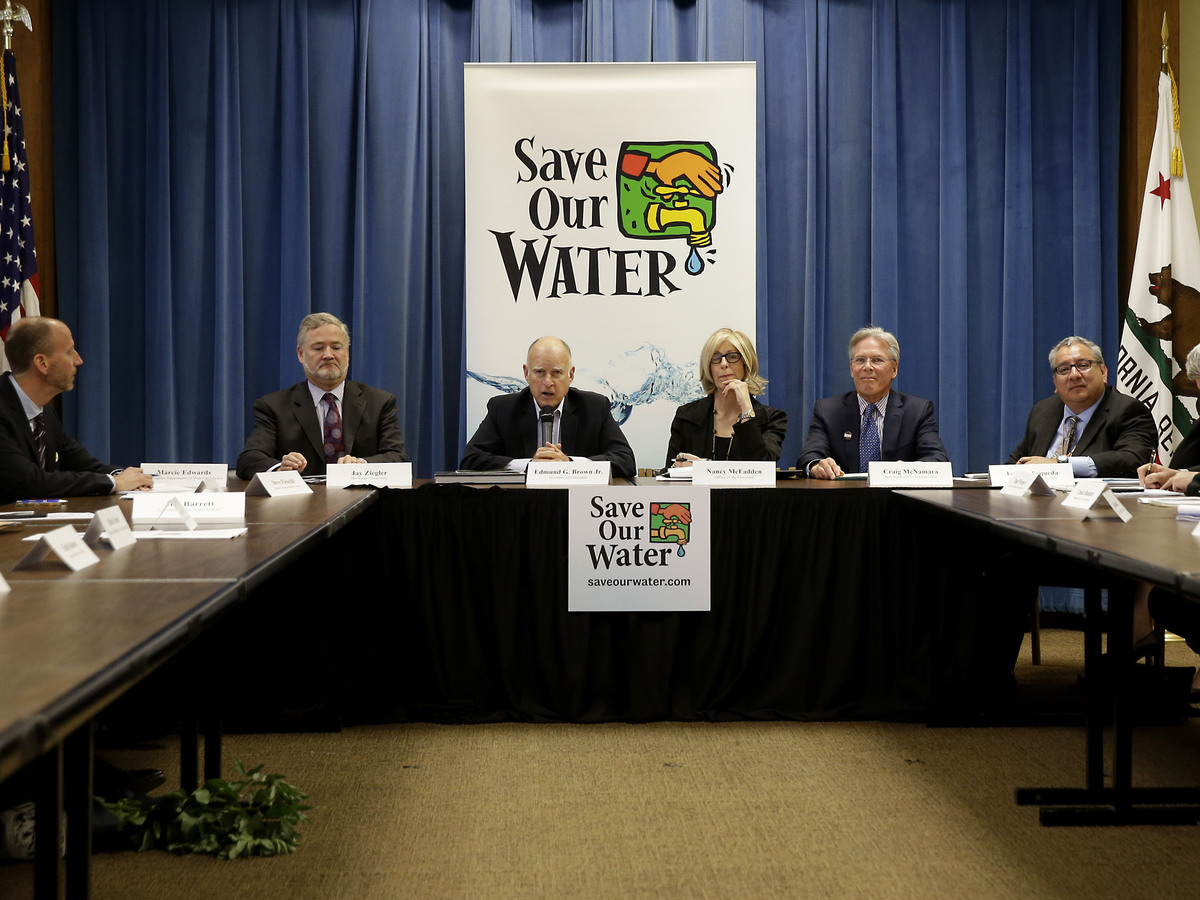 Ok, now here are the answers to some questions you sent us, as well as some other questions we had ourselves.

Q. Are there different restrictions depending on where you live?

There are 411 urban water districts in California, and most of them have been putting their own conservation measures in place for some time. Some vary greatly, and new state guidelines appear to take that into account.

And even within the statewide regulations there are variations. Brown's 2015 executive order says the statewide restrictions will "consider the relative per capita water usage of each water supplier's service area, and require those areas with high per capita use achieve proportionally greater reductions than those with low use." Basically, areas that have already been doing a pretty good job of conserving will be forced to conserve less under these new rules than areas that have not.

NPR member station KPCC did its own drought FAQ a few weeks ago, and at the bottom, they featured a nifty tool that allows you to see how much your specific water district has to save.

The San Jose Mercury-News says, "Cities like Hayward, Santa Cruz and San Francisco, which already have been conserving and have low per-capita water use, were given 8 percent targets. Cities such as Beverly Hills, Hillsborough and Bakersfield, which have been guzzling water, were told to cut 36 percent."

The state water board says it might adjust who's in what tier based on new data as conservation efforts continue.

Q. What kind of fines and penalties could I face for violating water restrictions?

In 2014, the governor gave water regulators the ability to fine people up to $500 for certain violations: any outdoor watering that causes runoff, using a hose to wash your car unless that hose has a shutoff nozzle, applying water to hard surfaces like a sidewalk or driveway, and using potable water in fountains and other decorative features.

That 2014 executive order also grants the state the ability to fine water agencies that don't comply up to $10,000 a day.

In addition, every local authority can have its own fine and penalty structure. Los Angeles' Department of Water and Power told us theirs:

"Our enforcement team in Los Angeles, the Water Conservation Response Unit, tries to educate our customers about their water waste violation before handing out fines. This gives the customer an opportunity to correct their violation before facing monetary fines. For residential customers, the first offense gets a formal warning letter, 2nd offense - $100 fine, 3rd offense - $200 fine, and 4th offense - $300 fine. Fine amounts are double for commercial customers."

Most water suppliers give out at least one warning before a fine or penalty. And many water suppliers don't have a high number of enforcement personnel to be on the look out for violations. Los Angeles' Department of Water and Power, which serves a metropolitan area of millions, has about half a dozen so-called "water cops."

Currently, there's no one website that lists all the rules for all 411 of California's urban water districts. Most water authorities publish their own rules online.

Q. What are the best ways to quickly cut water use in someone's home?

Pretty much everyone we talked to agrees on these basics:

We talked with experts and water officials, including the Association of California Water Agencies, and representatives of Los Angeles and Butte County. We also consulted water-saving suggestions from the state.

California has a website, http://saveourwater.com/, that makes water-saving to-do lists and even drought-themed comic books.

An ad created and released by the San Francisco Public Utilities Commission. State officials have mandated water usage cutbacks of 25% across the state, but each local water authority can achieve those savings in their own way. AP hide caption

Q. How do water restrictions and enforcement differ between poorer and richer neighborhoods? Do rich people just get away with using more water?

This is a hard question to answer. Lots of data does suggest wealthier Californians are using more water than poorer residents. For one, a lot of the time, they have bigger lawns to water. The state has a breakdown of how much communities have saved so far.

And some neighborhoods stand out. Beverly Hills for instance, only conserved 3 percent more water from June 2014 to February 2015, compared to 2013 usage levels. But in that same period, Palo Alto, another wealthy area in California, conserved 16 percent.

While it's hard to generalize conservation by income level, some do say that when it comes to enforcement, rich people get off the hook, leading to the recent phenomenon of public "droughtshaming" of celebrities like J.Lo, Kim Kardashian, and Barbra Streisand.

Part of Governor Brown's executive action on water conservation requires water districts to report their monthly use. March 2015 numbers say that in the Santa Fe Irrigation District, which serves the elite Rancho Santa Fe neighborhood in San Diego, the R-GPCD, or residential gallons per capita day, was 366.7 gallons. That figure is several times higher than usage rates for the Lake Arrowhead Community Services District (in the mountains east of Los Angeles), for instance. Their R-GPCD number was 22.6 for the same period.

Q: What about restrictions on agriculture? Are there any?

UPDATE: On Friday, June 12, California introduced water restrictions on some farmers. In a press release, the State Water Resources Control Board said the new limits will affect 114 senior water rights holders. They've been ordered to stop pumping water from drought-stricken rivers completely, or face fines of up to $1,000 per day and $2,500 per acre-foot of water "unlawfully diverted." It's believed that this is the first such order impacting senior water rights holding farmers since the 1977 drought.

These farmers may still be able to rely on pumping groundwater, or buying water on the open market. You can read more here:

Here is our original answer to water restrictions on agriculture:

Agriculture was left out of Brown's April 1st executive order. But many farmers in the Central Valley say they've already been forced to cut back for the last two years, as water deliveries from state and federal irrigation systems have been cut to near zero.

And NPR's Kirk Siegler reports that water shortages are pitting farmer against farmer. Siegler reports that the Westlands Water District in Fresno County routinely tops the nation in agricultural output, but 2015 is expected to be the second straight year that 700 farmers in the district won't get any irrigation water from the federal canal system.

It's often pointed out that agriculture uses the bulk of California's available water supply, and the governor has hinted that more regulations on farmers could be coming. To get out in front of that, some farmers in the Sacramento Delta area with senior water rights agreed to some voluntary water use cutbacks. Those farmers went to the state with their proposal, which says they'll either reduce their water diversions by 25 percent, or fallow 25 percent of their land. Those cutbacks would be from 2013 levels. The state said water rights holders who choose not to participate might face mandatory cutbacks later in the year.

One study from the University of California-Davis said the drought could cost the agriculture industry close to $3 billion in 2015 alone.

Q. Are there any medical exemptions to these restrictions?

Some readers wanted to know what happens to people that have conditions that require them to, say, shower or bathe multiple times a day. This answer depends on your local water authority. Los Angeles does have a medical exemption, and they say this: "There are exemptions in water use restrictions allowed for health and safety reasons. LADWP allows customers to fill out a variance request for any restrictions in the city's Water Conservation Plan Ordinance that would cause undue hardship to customer with physical disabilities and other medical considerations."

Q. Are there any restrictions on corporate water use, for places like restaurants, hotels and golf courses? Are they harsher than individual and family restrictions?

There are differences in statewide as well as local regulations. The Association of California Water Agencies gave us this summary:

"In addition to the prohibitions that apply to all Californians, there are a few specific provisions for businesses. Restaurants and other food service establishments can serve water to customers only on request. Hotels and motels must provide guests with the option of not having towels and linens laundered daily. Golf courses, like all Californians, are subject to the individual end-user requirements contained in the emergency regulation. Furthermore, golf courses served by a water supplier are subject to the conservation actions determined by their water supplier. Additionally, golf courses with an independent water supply (i.e., not served by a water supplier in part or whole) are required to either limit outdoor irrigation to two days per week or achieve a 25 percent reduction in water use."

Q. Are some municipalities fighting these mandates?

Yes, at least one. Riverside sued the state saying the new rules on water conservation are "arbitrary and capricious." KPCC's Molly Peterson reported on the story, and says:

"Under the rules, Riverside is required to reduce water use over the next nine months by 24 percent compared to a similar period in 2013 or face penalties of up to $10,000 a day. In a complaint filed in Fresno Superior Court, lawyers for the city counter that Riverside should have qualified for an alternative "reserve tier," which only required cities to save 4 percent."

Q. How much water should I be using every day?

There isn't just one answer to this question. Different local authorities, and experts have multiple targets for use. But UC Berkeley researchers told NPR that using 35 gallons per person, per day is a pretty good amount. Without thinking, those researchers told us, many people use more than 50 gallons of water per day. But lowering that number is simple. Changing just one or two things can cut a lot of water waste.

Q. How much water have Californians actually saved?

A fair amount, actually. Monthly water saving, statewide in California were 13.5 percent in April of this year, compared with April 2013. But that's still just more than half of the governor's goal for the state.