Accessibility links
Baseball Hacking: FBI Is Looking Into Possible St. Louis Attack On Houston Astros : The Two-Way The breach occurred last year and centered on proprietary information about players and team operations. MLB's commissioner says the league is cooperating and will act when the inquiry is complete. 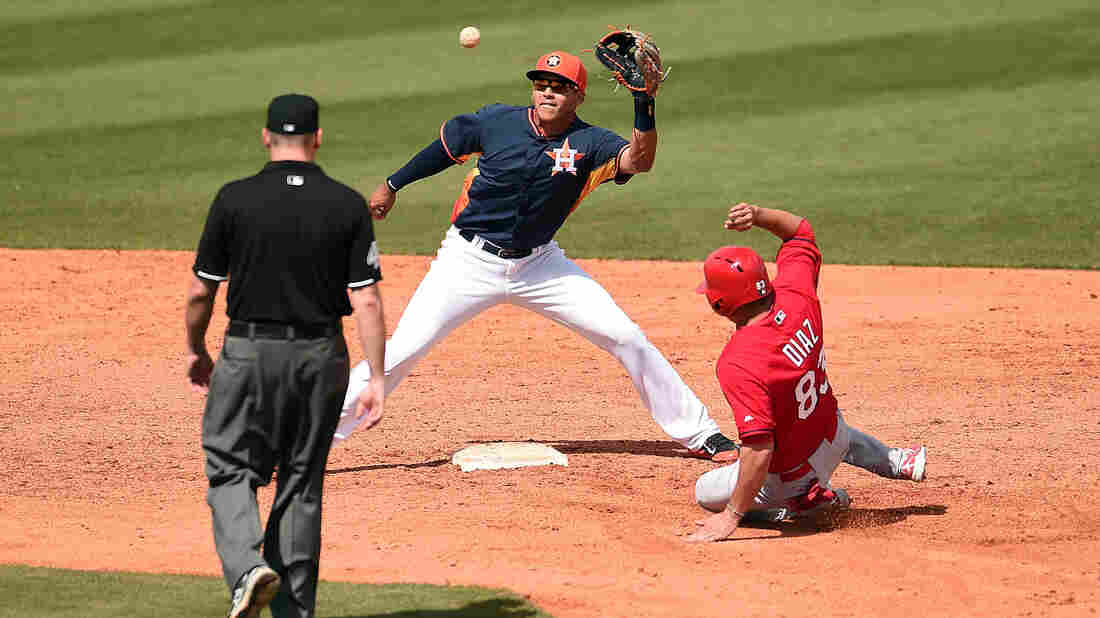 Did the St. Louis Cardinals try to steal more than second base from the Houston Astros? The FBI is looking into a hacking attack on a key Astros database. Here, the Cardinals' Aledmys Diaz is tagged out at second by Carlos Correa of the Astros during a spring training game in March. Stacy Revere/Getty Images hide caption 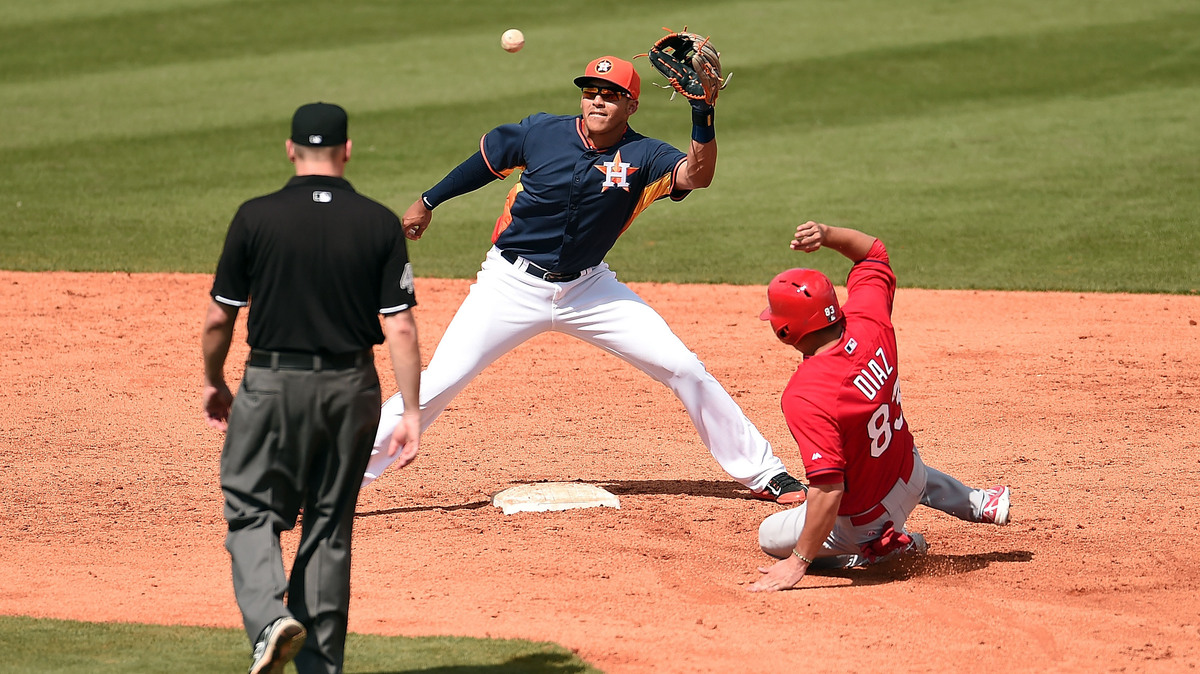 Did the St. Louis Cardinals try to steal more than second base from the Houston Astros? The FBI is looking into a hacking attack on a key Astros database. Here, the Cardinals' Aledmys Diaz is tagged out at second by Carlos Correa of the Astros during a spring training game in March.

In a news conference late Tuesday afternoon, Major League Baseball commissioner Rob Manfred said the league has been cooperating fully with the FBI investigation, and that the league will wait until that inquiry is complete to take its own actions.

"In addition to what happened, there's the question of who did it, who knew about it — you know, is the organization responsible, is the individual responsible," Manfred said. "There's a whole set of issues that are gonna need to be sorted through."

Did the St. Louis Cardinals use their familiarity with former executive Jeff Luhnow to break into the data systems Luhnow uses at his new job with the Houston Astros? That's one of the questions federal authorities confirm they're investigating.

There's no word on any potential charges in the case, or on who within the Cardinals' organization might have been involved. The breach occurred last year and centered on proprietary information about players and team operations.

A source in federal law enforcement has confirmed the federal investigation to NPR's Carrie Johnson; the Cardinals say the team is cooperating with the inquiry.

Luhnow became the Astros' general manager in late 2011; prior to that, he was a vice president in the Cardinals' organization, focusing on evaluating players. A report Tuesday by The New York Times says investigators suspect the Cardinals broke into the Astros' network of special databases where the team kept "discussions about trades, proprietary statistics and scouting reports."

The information compiled by Luhnow could be particularly valuable — he's a former business consultant whose analytical approach was credited with modernizing how the Cardinals evaluated talent. Despite being a divisive figure, he rose to lead the team's scouting department.

According to a 2014 Bloomberg Business profile of Luhnow, "During the seven years he ran amateur scouting, no team had more draft picks make it to the big leagues than the Cardinals."

According to The Times, the investigation "has progressed to the point that subpoenas have been served on the Cardinals and Major League Baseball for electronic correspondence."

The newspaper says federal investigators were brought in after a trove of confidential Astros documents was posted online last year — and that suspicions eventually revolved around "a master list of passwords used by Mr. Luhnow" and others who had left St. Louis to join the Astros. That brought up the possibility that Cardinals officials might have used the passwords to gain access to the Astros' system.

The FBI's Houston office is leading the investigation into whether the Cardinals accessed the Astros' private files. Carrie passes along a statement from FBI special agent and Houston office spokeswoman Shauna Dunlap:

"The FBI aggressively investigates all potential threats to public and private sector systems. Once our investigations are complete, we pursue all appropriate avenues to hold accountable those who pose a threat in cyberspace."

The St. Louis Cardinals have released a statement:

"The St. Louis Cardinals are aware of the investigation into the security breach of the Houston Astros' database. The team has fully cooperated with the investigation and will continue to do so. Given that this is an ongoing federal investigation, it is not appropriate for us to comment further."

Major League Baseball issued its own reaction, saying that it has "fully cooperated with the federal investigation into the illegal breach of the Astros' baseball operations database."

When the federal inquiry ends, MLB says, "we will evaluate the next steps and will make decisions promptly."