Accessibility links
U.S. Women Beat Nigeria 1-0, Win Group And Advance To Elimination Rounds : The Two-Way The victory, thanks to a goal by Abby Wambach, eases the Americans' path toward the World Cup, while the Nigerians were eliminated by the loss. 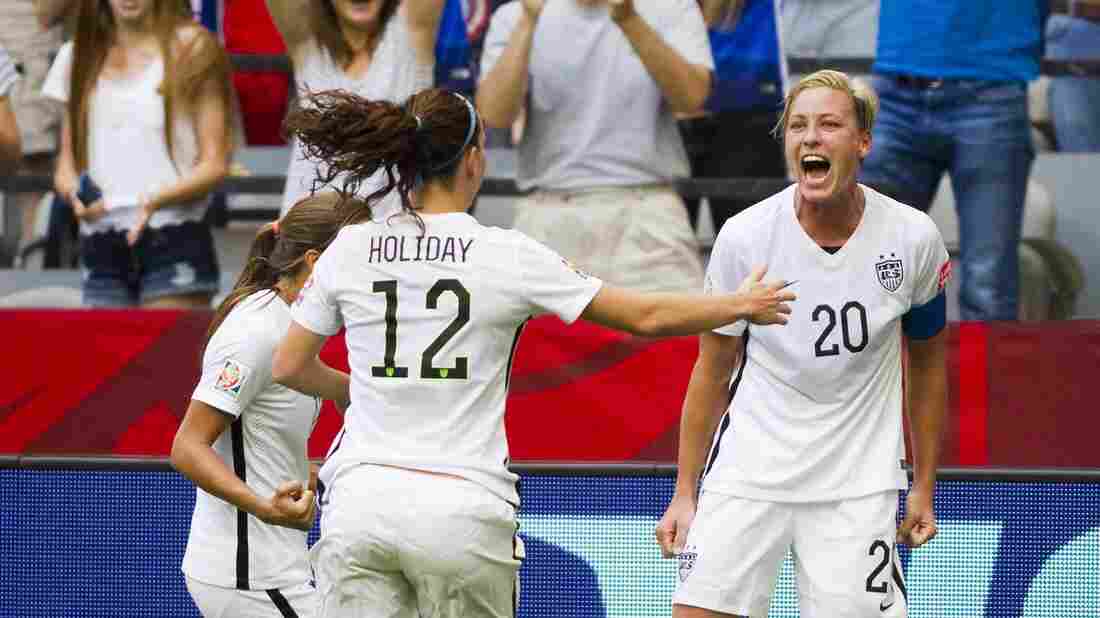 Abby Wambach of the U.S. (from right) celebrates with teammates Lauren Holiday and Tobin Heath after scoring against Nigeria at the end of the first half Tuesday during the FIFA Women's World Cup in Vancouver, Canada. Ben Nelms/EPA/Landov hide caption 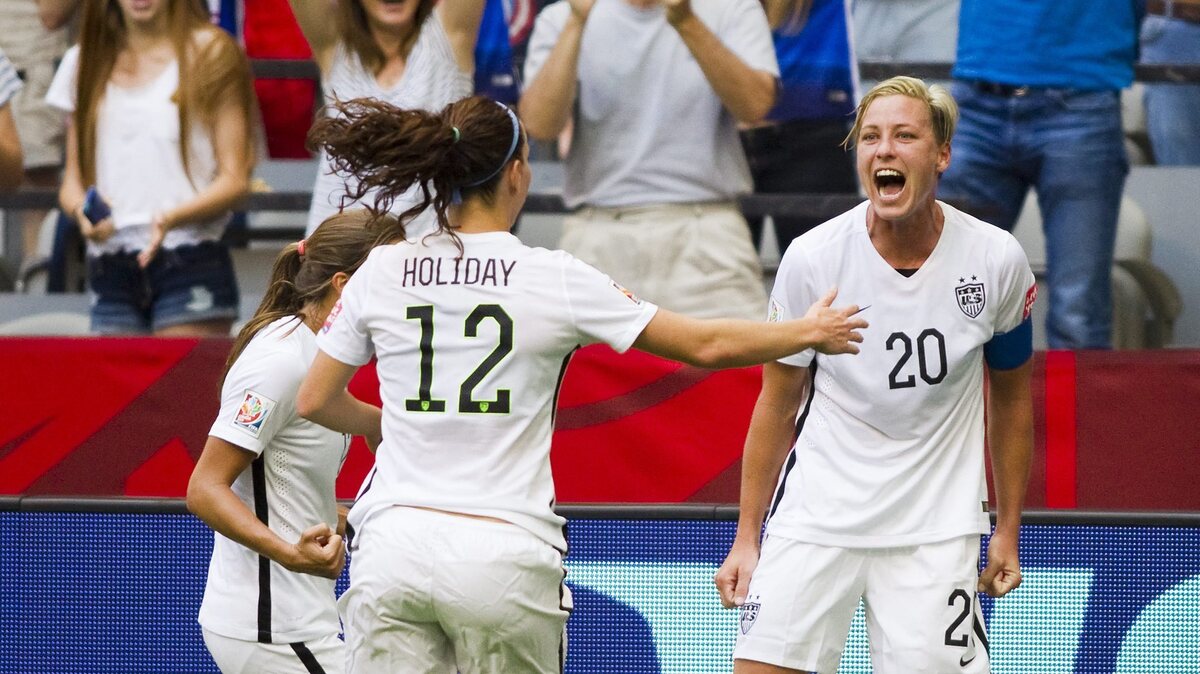 Abby Wambach of the U.S. (from right) celebrates with teammates Lauren Holiday and Tobin Heath after scoring against Nigeria at the end of the first half Tuesday during the FIFA Women's World Cup in Vancouver, Canada.

U.S. veteran Abby Wambach, making her second start of the World Cup, scored her first goal of the tournament and the 183rd of her storied international career to push the Americans past Nigeria on Tuesday in Vancouver, Canada.

The 1-0 victory allowed the U.S. to win Group D and advance into the elimination rounds, where they'll face another group's third-place team on Monday, followed by a possible matchup against Cameroon or China later next week.

The Americans dominated the match, taking twice as many shots as the Nigerians. Nigeria's players also got into foul trouble, finding themselves the recipients of multiple yellow cards. Defender Sarah Nnodim got two of them, resulting in a red card and her ejection from the game. The loss to the U.S. eliminated Nigeria.

In the other Group D game, Australia tied Sweden, taking second place and advancing to face Brazil. Sweden ended in third place, but may still have another match, as four of the six third-place teams will move on.

The United States is back in action tonight at the Women's World Cup in Canada. The U.S. has its final soccer game in group play against Nigeria. With a win, the U.S. would advance to the knockout round. Even with a tie or a loss, the U.S. could still move on. (More on that below.)

Nigeria started the tournament well with a surprising and thrilling 3-3 draw against fifth-ranked Sweden. The Nigerian soccer team (nicknamed the Super Falcons) played flat in the next game against Australia, losing 2-0. This is the final game in group play for both teams and the U.S. is favored to win tonight's match.

Nigeria's star player is forward Asisat Oshoala who has had an incredible year (she plays for Liverpool and just before the World Cup began, the BBC named her as the Women's Footballer of the Year.)

For tonight's game, Nigeria will be missing a player. Defender Ugo Njoku was fined and suspended for three games after throwing a vicious elbow to the face of an Australian player in Friday's game.

The U.S. is hoping to escape tonight's game without injuries. Perhaps the biggest struggle for the U.S. is scoring goals. After the 0-0 game against Sweden, forward Abby Wambach blamed the lack of scoring on the artificial turf. This is the first (and last) World Cup tournament played on turf.

If the U.S. is victorious tonight, it will win Group D and have a much easier time advancing in the World Cup. If the U.S. ties or loses against Nigeria, here are the scenarios for moving on (and it's complicated!) via U.S. Soccer:

The U.S. will finish in first place in the group if:

The U.S. will finish in second place in the group if:

If the U.S. finishes second in Group D, the team would play Brazil on June 21 in Moncton.

Kickoff tonight is at 8 p.m. ET and will be broadcast by Fox and NBC Universo.

A previous version of this post said Abby Wambach made her first World Cup start in the match with Nigeria. In fact, she was in the starting lineup in a game with Australia. The post also said a Nigerian defender was ejected owing to yellow cards in the U.S. game and in a previous game. She actually received both cards in the U.S. match.