Accessibility links
Greeks Will Vote On Whether to Pay EU's Price For Financial Bailout : The Two-Way Lenders from the European Union and International Monetary Fund want austerity measures to continue for another five months in Greece in exchange for $16 billion in aid. 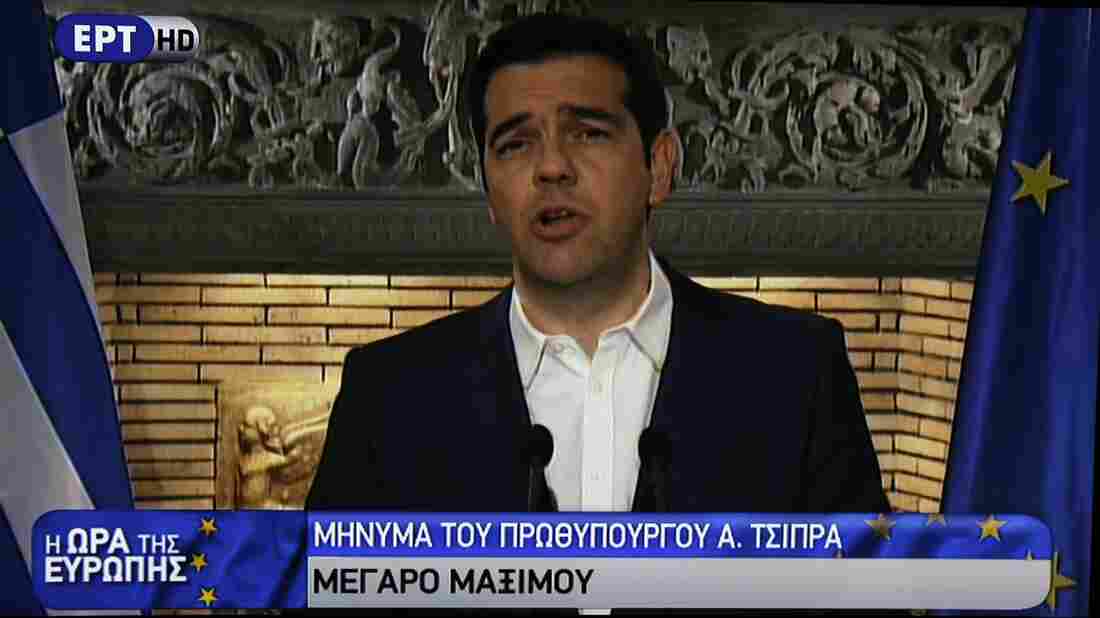 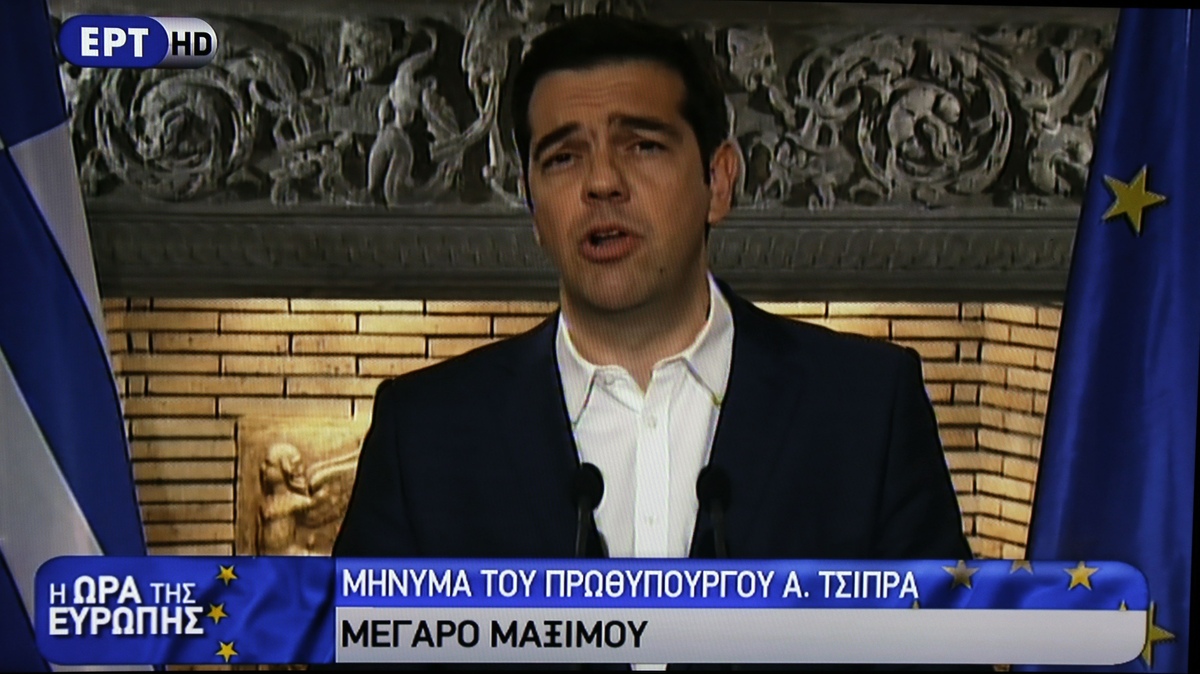 On state TV (ERT), Greece's Prime Minister Alexis Tsipras announced a referendum for July 5 on a bailout deal with creditors.

The prime minister of Greece has called a referendum for July 5 so Greeks can decide if they support or reject the current bailout proposal offered by the country's European and International Monetary Fund creditors.

It was a surprise move announced in a televised address after an emergency cabinet meeting Friday night, when members of the leftist, anti-austerity party had a heated discussion on how to handle a take-it-or-leave-it offer by lenders.

One idea that lenders had proposed was extending the current bailout program for five more months, giving Greece aid of about $16 billion. But the Greek government says it wants an altogether new deal.

Prime Minister Alexis Tsipras said the offer on the table included further cutting pensions and salaries, and increasing taxes, austerity measures he says are intolerable. Some in his party have called Greece a "debt colony" because it can't pay back billions of dollars in loans, and is forced to accept eurozone-imposed austerity measures.

They blame the budget cuts and tax hikes for damaging the economy further. The unemployment rate has tripled to more than 26 percent, and the country's GDP has shrunk by a quarter.

In his televised address, Tsipras said that the eurozone's offer was an ultimatum and that European leaders wanted to humiliate Greece.

"We are facing a historic responsibility to not let the struggles and sacrifices of the Greek people be in vain, and to strengthen democracy and our national sovereignty — and this responsibility weighs upon us," he said.

Greek leaders were supposed to join other European leaders Saturday to continue negotiations. Instead, the Greek parliament will debate the referendum. It may tricky to craft the wording, as the Greek constitution does not allow referendums on fiscal issues.

Tsipras has asked creditors to extend the bailout program that ends Tuesday for a few extra days so Greeks can vote "without pressure."

Finance Minister Yanis Varoufakis said the government had no other choice. "Democracy deserved a boost in euro-related matters," he tweeted. "We just delivered it. Let the people decide. (Funny how radical this concept sounds!)"

But it's unclear what the outcome will be for a country already politically, socially and economically fragile. Former Prime Minister George Papandreou called a similar referendum in 2011, and European leaders (and members of his own party) threatened him until he backed down. Tsipras himself slammed Papandreou then for calling it.

Papandreou eventually stepped down as prime minister, and made way for a "national unity" government that was ridiculed as puppets by members of the anti-austerity camp, including Syriza.

Since then, the country has been in nearly constant political turmoil.

Most Greeks want to remain in the eurozone, and at least one poll showed that about half want their government to do so even if it means agreeing to credit terms that will bring more austerity. Even Syriza supporters believe that staying in the euro has more benefits than default, exit and a return to the previous currency, the drachma.

"We have sacrificed a lot to get into the currency union," said Kostas Sinodinos, 31, who has an advanced degree in international relations but can't find work so he supports himself by making miniatures for collectors. "Our previous governments made many mistakes. They misused EU funds, they cheated us and the Europeans. But this government wants to do the right thing for Greece and the eurozone. I wish the other Europeans would trust them."

But they don't. German Chancellor Angela Merkel said on Friday that creditors had made their final offer with terms that she called "extraordinarily generous." Meanwhile, German Finance Minister Wolfgang Schaueble, Greece's strongest critic, told reporters that "no one country in a currency union can endlessly spend money at the cost of others." He also used an analogy: "When you're driving down the Autobahn and everyone else is driving the opposite direction, you may think you're right, but you're wrong."

Some analysts say calling the referendum shows that the government has badly handled credit talks. "Even if a majority were to back the proposal, the question is whether a government now openly opposed to the agreement would be able and willing to implement the attached reform conditions," wrote Wolfango Piccoli, managing director of Teneo Intelligence in London. "Equally, if the "No" camp wins, it is entirely unclear at this point what the government's plan B would look like."

Hugo Dixon, an editor-at-large for Reuters, wrote on his blog that Tsipras is "effectively calling for Greece to quit the euro. Even if that's no the question, that's what it will amount to."

He also wrote that the ECB will likely stop emergency liquidity to banks, and if capital controls are not imposed on Monday, that will lead to a bank run. Add to that the pain of a eurozone exit, which includes more unemployment, massive currency devaluation, rising inflation and even the rationing of basic commodities. "In short," he wrote, "Greece is staring at a choice between very bad and very very bad."