Accessibility links
11:59:60 — Look For An Extra Tick Of The Clock Tonight : The Two-Way "Leap seconds" are added from time to time to keep atomic clocks in sync with a time standard tied to the rotation of the Earth. This will be the 26th time it's been done. 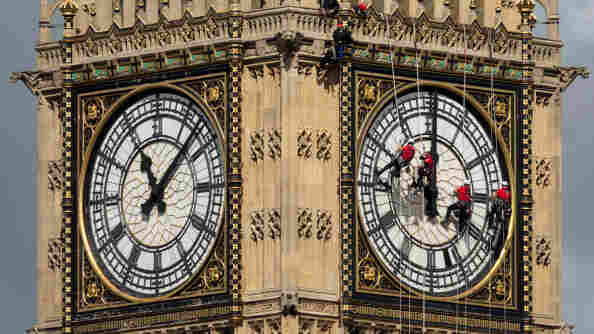 Clocks around the world, like Big Ben, will have an extra second added tonight. Oli Scarff/Getty Images hide caption 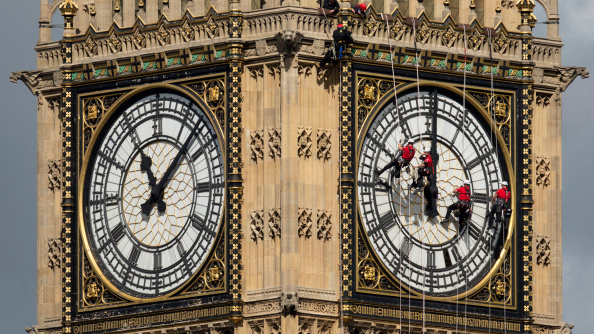 Clocks around the world, like Big Ben, will have an extra second added tonight.

If you're worried about finishing everything on your to-do list, you'll get an extra second today to cram it all in.

The extra second is called a "leap second." At the very end of the day, the clock will read 11:59:60 Universal Time (the official time that international timekeepers use) or 7:59:60 p.m. ET.

Astronomers at the International Earth Rotation and Reference Systems Service in Paris decided earlier this year on the extra tick of the clock — the 26th time that's happened since the world started using atomic clocks, the Los Angeles Times reports. Leap seconds are added to keep those atomic clocks in sync with a time standard tied to the rotation of the Earth.

Here's more from the Times:

"The international timekeeping community has two ways of measuring the passing of our days. The first, known as astronomical time, is based on how long it takes Earth to make one complete spin on its axis. Scientists keep track of this by aiming a network of radio telescopes at a distant quasar.

"Atomic time, on the other hand, defines a second as exactly 9,192,631,770 oscillations of a cesium-133 atom. This is what determines the time that displays on your computer or cellphone."

The Times says that large weather systems, volcanoes and earthquakes can have enough force to change the speed of Earth's rotation. So, while the atomic clock ticks consistently, Earth's rotation changes.

NPR's Geoff Brumfiel says that because the changes in Earth's rotation are unpredictable, the addition of leap seconds is also sporadic.

As the Two-Way reported back in 2012, not everyone is sold on the leap second:

"The argument against the leap second is that it makes life just a tiny bit more difficult for businesses and communications networks (such as GPS systems) if they have to recalibrate every year or two. The argument for the leap second is that the problems such companies have might only get worse over time (yes, we said it) if the Earth and our clocks grow increasingly apart."

When the last leap second was added, in 2012, it caused some technical problems, according to The Telegraph. Mozilla, Reddit, Yelp, LinkedIn, Foursquare and other companies reported crashes, the newspaper reports, and more than 400 flights in Australia were grounded because Qantas' check-in system crashed.

" 'There are consequences of tinkering with time,' said Peter Whibberley, Senior Research Scientist in the Time and Frequency group at NPL, who is known to colleagues as 'The Time Lord.'

" 'Because leap seconds are only introduced sporadically it is difficult to implement them in computers and mistakes can cause systems to fail temporarily.' "

But Geoff says the argument to keep the leap second gets a little philosophical. If we don't add leap seconds, the time of day could become a lot less meaningful — imagine what it would be like if noon happened around sunset.