Accessibility links
Obama To Meet With Vietnam's Communist Party Chief Amid Concern Over China : The Two-Way Hanoi and Washington hope to strengthen economic and defense ties, especially in the wake of Beijing's construction on a disputed reef in the South China Sea. 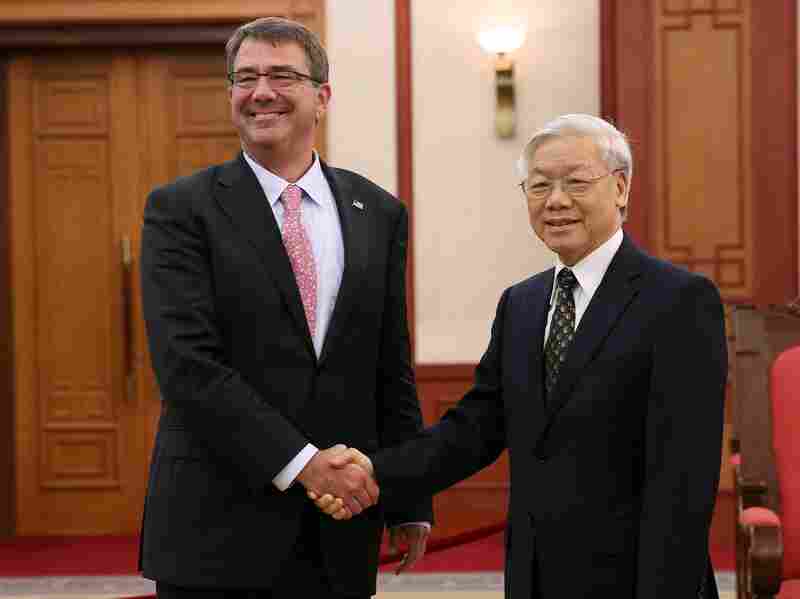 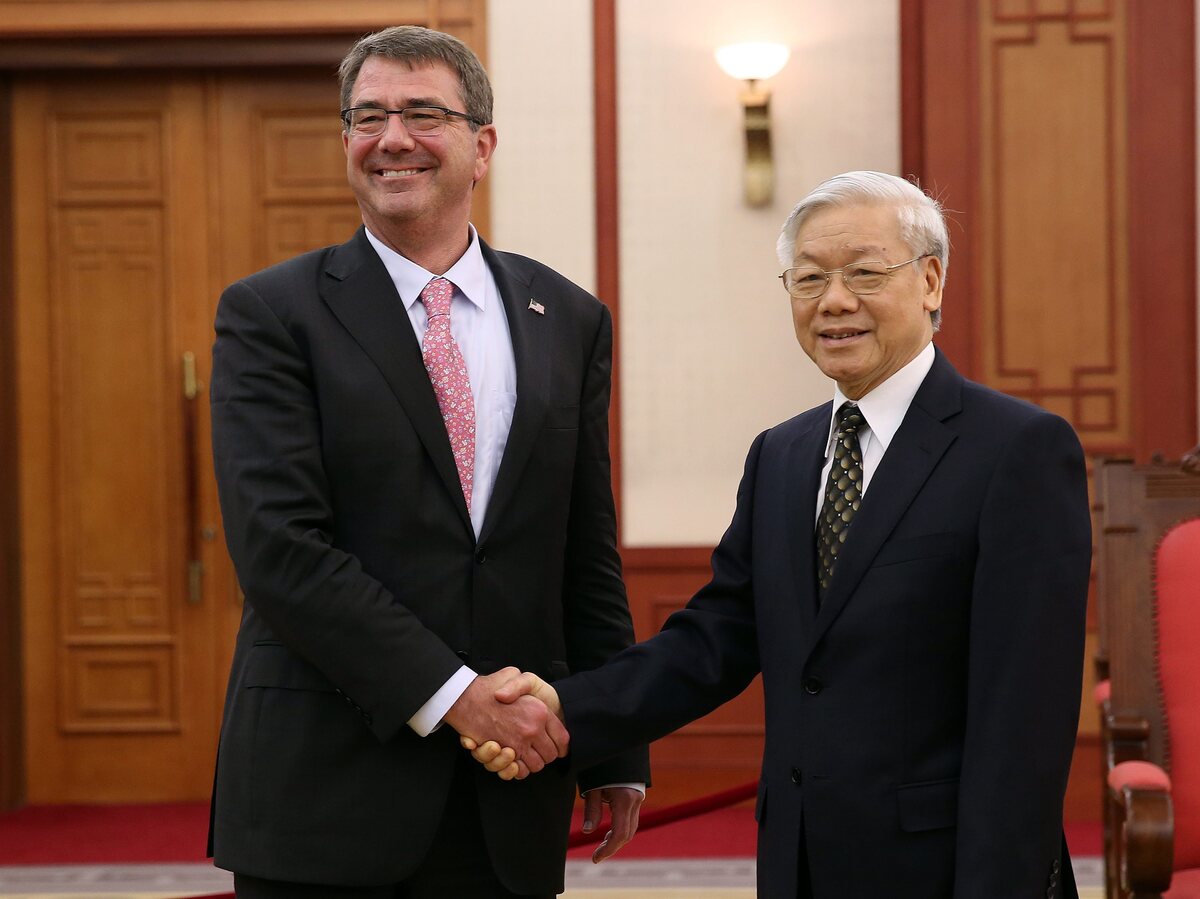 U.S. Secretary of Defense Ash Carter shakes hands with Vietnam's General Secretary Nguyen Phu Trong at the Presidential Palace in Hanoi, Vietnam, on June 1. Trong will meet with President Obama in the White House on Tuesday.

Nguyen Phu Trong — the head of Vietnam's communist party and one of most powerful figures in the Southeast Asian nation — will meet with President Obama on Tuesday for a historic meeting aimed at strengthening ties between the two nations.

The 71-year-old party secretary said Friday that he hopes to build trust between Washington and Hanoi 20 years after President Bill Clinton normalized diplomatic ties and four decades after the end of the Vietnam War.

Vietnam's Thanh Nien News writes: "Other issues, including the US-led Trans-Pacific Partnership, human rights, and bilateral defense cooperation, are also on top of the agenda."

Trong, in a written reply to a small gathering of western journalists on Friday, said: "Like in any relations between two countries in the world, Vietnam and the U.S. have differences on a number of issues such as perception on democracy, human rights and trade," adding: "To resolve differences, I believe the most effective way would be open and constructive dialogues to better understand each other so that differences won't become hurdles to the overall bilateral relations.

The Guardian writes that "Trong is one of the four most powerful figures in Vietnam, along with the president, Truong Tan Sang, the prime minister, Nguyen Tan Dung, and the national assembly chairman, Nguyen Sinh Hung. In theory, he is first among equals in the one-party communist state, but the country is ruled by the party's collective leadership, and most important decisions must be decided by a 16-member politburo."

The meeting comes amid renewed concern over China's muscle-flexing in the South China Sea that has put Beijing at odds with its maritime neighbors, particularly Vietnam. The two countries fought a brief but bloody border war in 1979 and have generally maintained frosty relations. Earlier this year, China embarked on an island-building program in a tiny archipelago that is also claimed by Vietnam.

Trong said he hoped "that the US will continue to have appropriate voice and actions to contribute to peaceful settlement of disputes in the (South China Sea) in accordance with international law in order to ensure peace and stability in the Asia-Pacific and the world."

As NPR's Jackie Northam notes: "Normally President Obama would meet with a head of state or government, but given Trong's importance in Vietnam and the U.S. strategy to reengage in Asia, it was decided that the two men will meet."

Obama also met with Vietnam's President Truong Tan Sang at the White House in 2013 and with the country's prime minister last year at a summit in Asia. And last month, U.S. Defense Secretary Ash Carter met with Trong at the Presidential Palace in Hanoi.

"Human rights advocates have expressed alarm at Trong's visit, saying that nation has not made significant progress in releasing political prisoners and improving labor rights for workers.

"There has been speculation among some foreign affairs experts in Washington that Obama could make his first visit to Vietnam this fall during his trip to Asia, but the White House has not confirmed such a visit."