Accessibility links
S.C. House Votes To Remove Confederate Flag From Capitol Grounds : The Two-Way The decision follows more than 13 hours of debate. Lawmakers in the House approved the Senate bill by a two-thirds margin, and the measure now goes to Republican Gov. Nikki Hailey's desk. 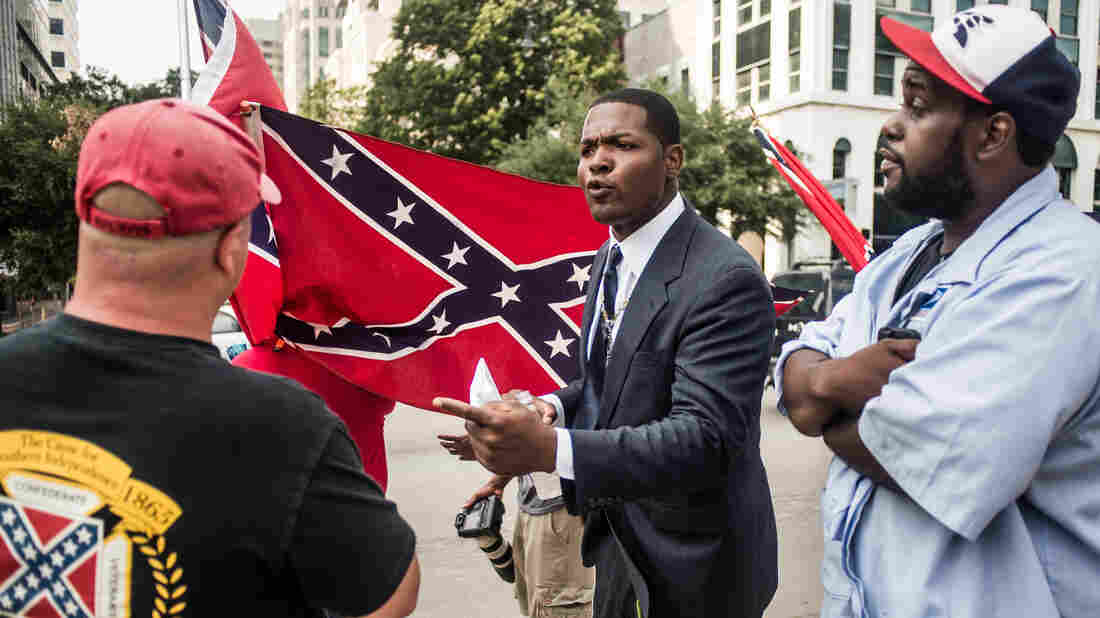 Jalaludin Abdul-Hamid, a protester against the Confederate flag that flies outside the South Carolina Statehouse, speaks to a flag supporter Tuesday. Sean Rayford/Getty Images hide caption 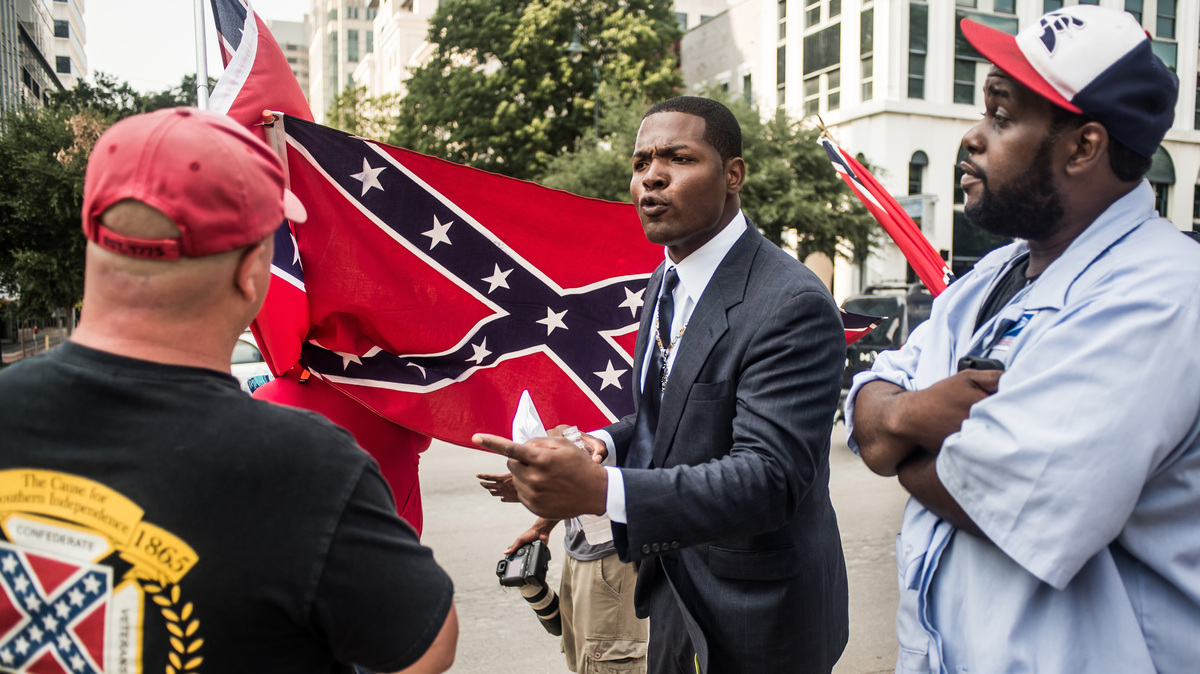 Jalaludin Abdul-Hamid, a protester against the Confederate flag that flies outside the South Carolina Statehouse, speaks to a flag supporter Tuesday.

Early Thursday morning, lawmakers in the South Carolina House approved a Senate bill that removes the Confederate flag from the Capitol grounds. The measure passed by a two-thirds margin and now goes to Republican Gov. Nikki Haley's desk. The Associated Press reports: As House members deliberated well into the night, there were tears of anger and shared memories of Civil War ancestors. Black Democrats, frustrated at being asked to show grace to Civil War soldiers as the debate wore on, warned the state was embarrassing itself.

The idea of removing the Confederate battle flag from a prominent place in front of South Carolina's Statehouse gets a crucial test Wednesday, when the state House of Representatives votes on a bill that would put the flag in a relic room.

Today's vote is pivotal: under South Carolina's legislative system, bills must be read and voted upon three times. The first vote is normally to introduce the bill; that happened Tuesday, after it was approved by the Senate. The third vote is often a formality.

By mid-day, the bill had been stalled by a host of amendments offered by opponents to removing the Confederate banner. One measure calls for planting flowers in the spot where the flag now flies.

We'll update this post with news from Columbia, S.C., where the House is considering the bill. The action comes two weeks after Gov. Nikki Haley and other leaders called for the flag to come down.

An amendment that calls for a public referendum on displaying the Confederate flag at the Statehouse is up for debate.

After a lunch break that included meetings between Gov. Haley and House Republicans, the chamber is back in session. The chamber's Republicans seemed to be holding prolonged meetings.

Shortly after 2 p.m., the House receded for a break that's expected to last until 3:30 p.m. So far, its members have voted down every amendment to the flag bill.

The House Democrats' spokesman, Tyler Jones, says 23 amendments were just placed on today's agenda. Earlier, the list of amendments had been trimmed down to six.

Rep. Wendell Gilliard opens discussion of the flag-removal bill by asking his colleagues to stand; he reads the names of the nine victims of last month's shooting at Charleston's Emanuel AME Church.

"What do we do now? The scales have been removed from our eyes. It's now time to do the right thing," Gilliard said, according to WIS TV's Will Whitson, who says Gilliard received an ovation after he told the chamber, "We are showing the world as one we can achieve anything. God bless you all."

For the flag to come down, the bill that would move it from a flagpole and into the Confederate Relic Room and Military Museum needs at least two-thirds support in both chambers of South Carolina's General Assembly.

While the flag bill received broad support — and only three "no" votes — in the Senate, many expect the process in the 124-member House to be more complicated.

Reporter Will Whitson of local TV news WIS 10 says that 26 amendments have been proposed — all of them by Rep. Mike Pitts, a Republican from Laurens, S.C. Some of those amendments call for alternate plans, such as replacing the current flag with another one from the Civil War era, or flying the Confederate flag only on Confederate Memorial Day.

"I've got a plethora of amendments drafted and I can talk 20 minutes on them. So can other supporters and if you take three people talking 20 minutes, you've added an hour to each one of those amendments," Pitts tells WIS 10.

In what seemed to be a bid to head off any attempts to filibuster the issue, the House did not immediately take up the flag issue as its first business, as the Senate had on Tuesday. Instead, the chamber occupied itself with recognizing notable citizens in attendance — as well as the work of security personnel who have been on special duty in recent weeks.

The flag issue has gained new currency in South Carolina, which has previously faced calls to remove the controversial banner. As we reported Tuesday:

"South Carolina's flying of the flag became a renewed focal point after the massacre of nine black church members in Charleston last month; the young white man who is accused of the crime had posted photographs of himself with the flag and other memorabilia that's associated with white supremacist movements.

"One of those killed at Charleston's Emanuel AME Church was its senior pastor, Clementa Pinckney — who also served as a state senator."

House Democrats have pledged that they won't waver in their demand for a "clean bill," one that ousts the battle flag from the grounds of the Capitol.