Accessibility links
NASA Zooms In On Pluto, For Closest Views Yet : The Two-Way New images of Pluto are beginning to arrive from NASA's space probe, and they're already allowing scientists to update what we know about the dwarf planet. 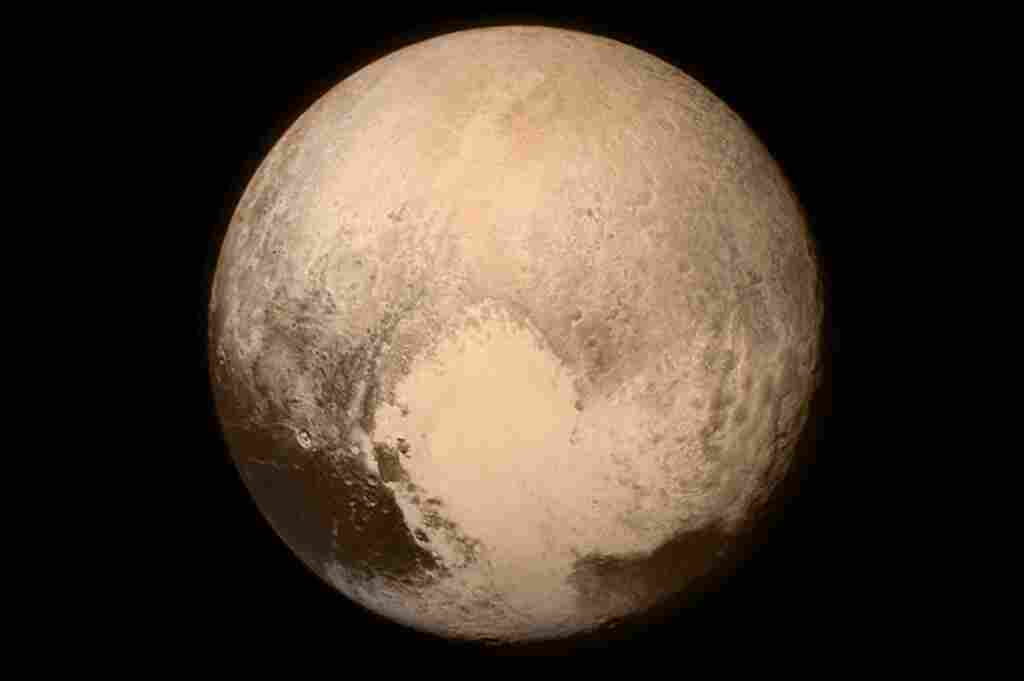 An image of Pluto that was taken by New Horizons shortly before its flyby Tuesday shows a heart-shaped pattern on the planet's surface. NASA says Pluto "sent a love note back to Earth." NASA/Johns Hopkins Applied Physics Laboratory/Southwest Research Institute hide caption 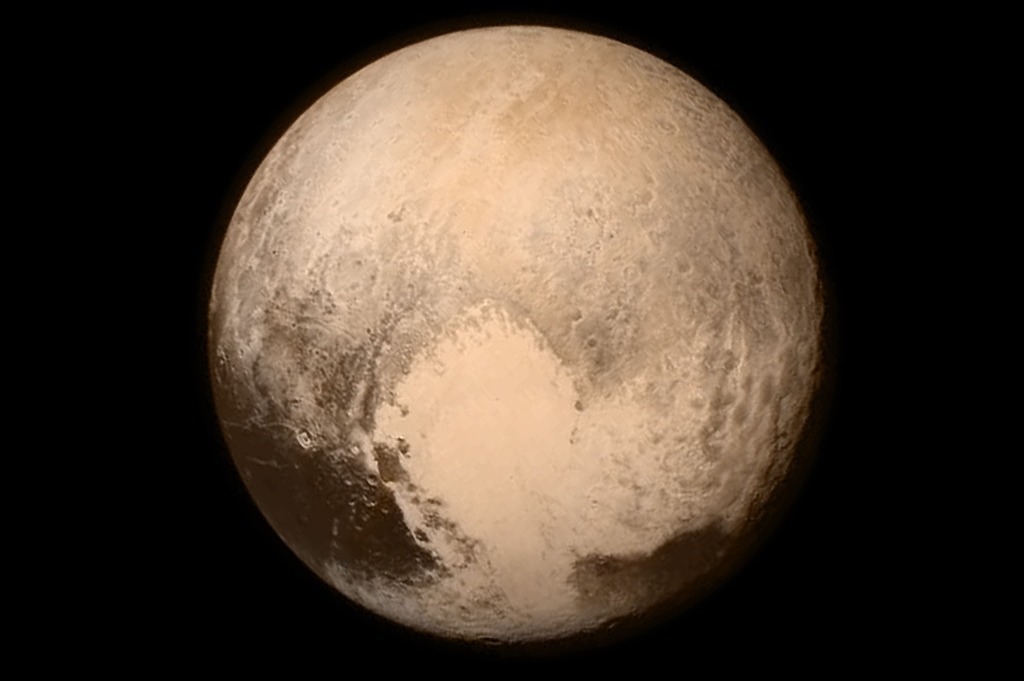 An image of Pluto that was taken by New Horizons shortly before its flyby Tuesday shows a heart-shaped pattern on the planet's surface. NASA says Pluto "sent a love note back to Earth."

New images of Pluto have arrived from a NASA space probe, and they're already allowing scientists to update what we know about the dwarf planet — such as its size. NASA's New Horizons probe has traveled more than 3 billion miles to send photos and data about Pluto back to Earth.

NASA is set to release more images and data gleaned from New Horizons' closest approach to Pluto, which was achieved just before 8 a.m. ET Tuesday, when it was about 7,750 miles from the planet. At the time of the flyby, the craft was traveling at more than 30,000 mph.

New Horizons "is about the size of a baby grand piano," NPR's Geoff Brumfiel reports for Morning Edition. He adds, "part of the reason it's so small is, they had to fling it away from Earth as fast as they could just to get it there within a decade."

That launch took place in January of 2006. Today, NASA says the time it took New Horizons to get to the destination was "about one minute less than predicted when the craft was launched." The agency added, "The spacecraft threaded the needle through a 36-by-57 mile (60 by 90 kilometers) window in space — the equivalent of a commercial airliner arriving no more off target than the width of a tennis ball."

If you're wondering why the planet has a reddish hue, NASA has an answer saying the color is caused by "the presence of methane at the surface. When the sun hits methane, it forms red-colored molecules."

We'll update this post with news from the space agency, which is still compiling data that were already sent back to Earth — and is awaiting new information from the flyby. It'll take months to receive all the data. 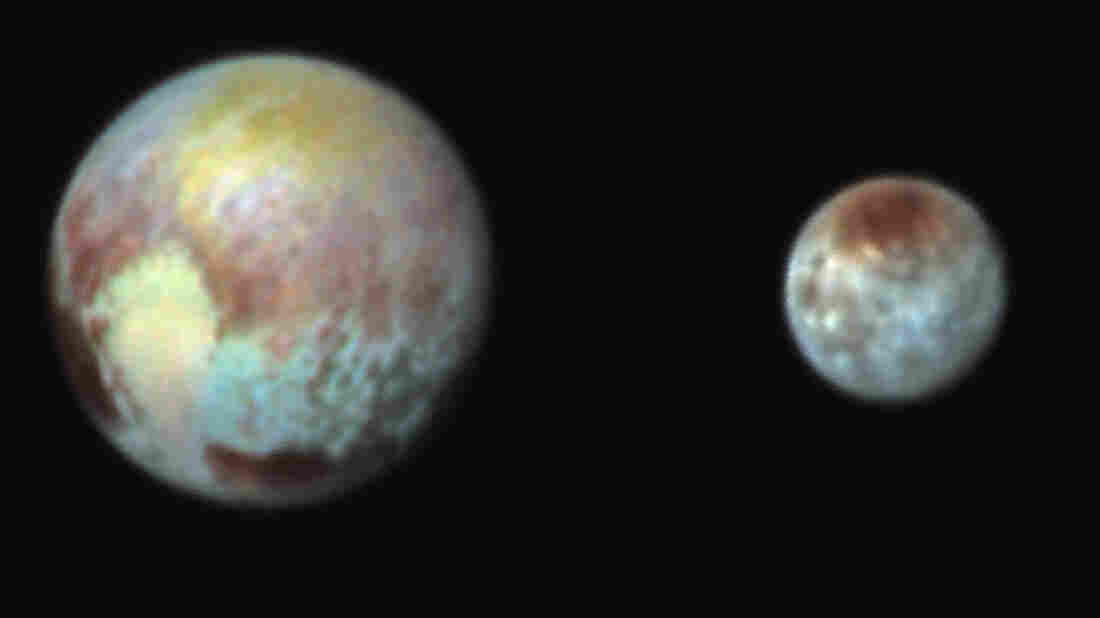 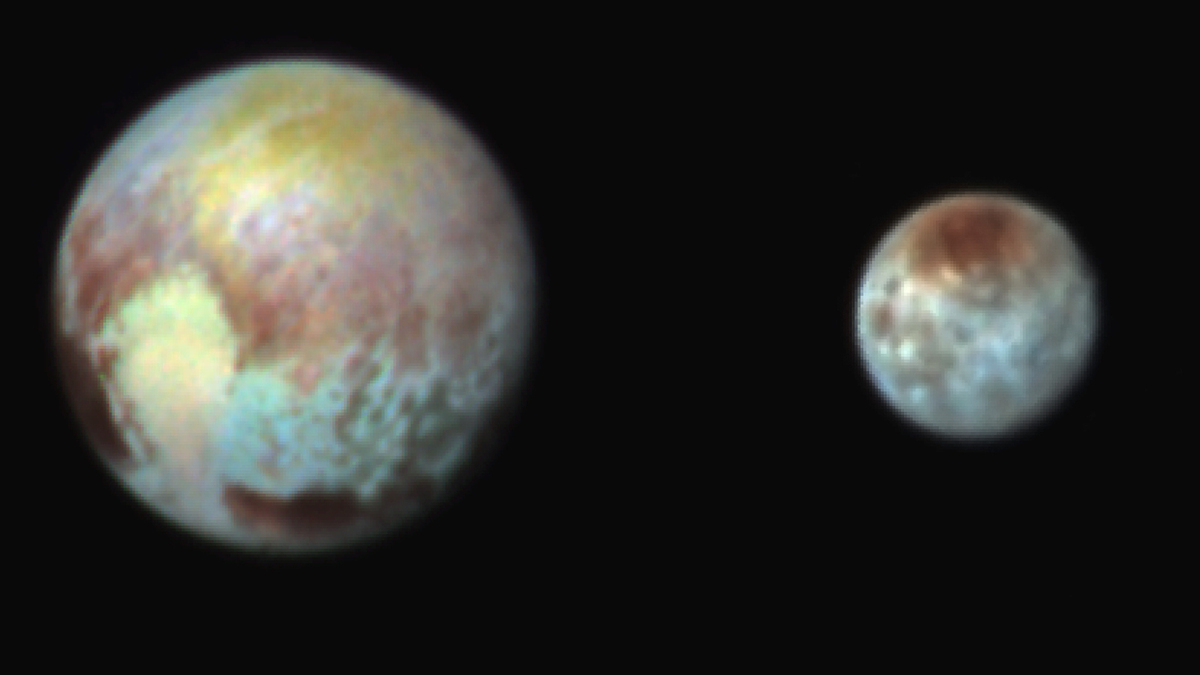 New false-color images of Pluto and the moon Charon exaggerate colors to highlight differences in their surface compositions, NASA says.

In a news conference Tuesday night, NASA Administrator Charles Bolden called the event an "incredible milestone," later adding that it "raised the bar of human potential."

NASA says it has received confirmation of a flyby and is now in touch with the probe.

After matching color information to images of Pluto, NASA has released new views of the mysterious planet and its large moon, Charon, which are seen in exaggerated colors that reflect surface differences and features.

"These images show that Pluto and Charon are truly complex worlds. There's a whole lot going on here," said New Horizons co-investigator Will Grundy, at the Lowell Observatory in Flagstaff, Arizona.

NASA says the colors help researchers "understand the molecular make-up of ices on the surfaces of Pluto and Charon, as well as the age of geologic features such as craters."

The agency adds that the images were taken on July 13; the closest and most detailed photos of Pluto aren't expected until sometime after Tuesday evening, when NASA reestablishes contact with New Horizons.

"Billions of miles from Earth, this little robotic spacecraft will show us the first glimpse of mysterious Pluto, the distant icy world on the very end of our solar system," says theoretical physicist Stephen Hawking.

Congratulating NASA and the New Horizons team on their "pioneering work," Hawking told an audience via YouTube, "I will be watching closely, and I hope you will too."

More new information is expected to be released Tuesday — particularly tonight, after NASA reconnects with the craft, which has been focused on gathering information about Pluto rather than communicating with Earth.

While NASA says the best photos and data are yet to come, the new pictures of Pluto have already far surpassed the fuzzy images we once had. For an overview of the Pluto mission, see our colleague Adam Cole's tribute to New Horizons. 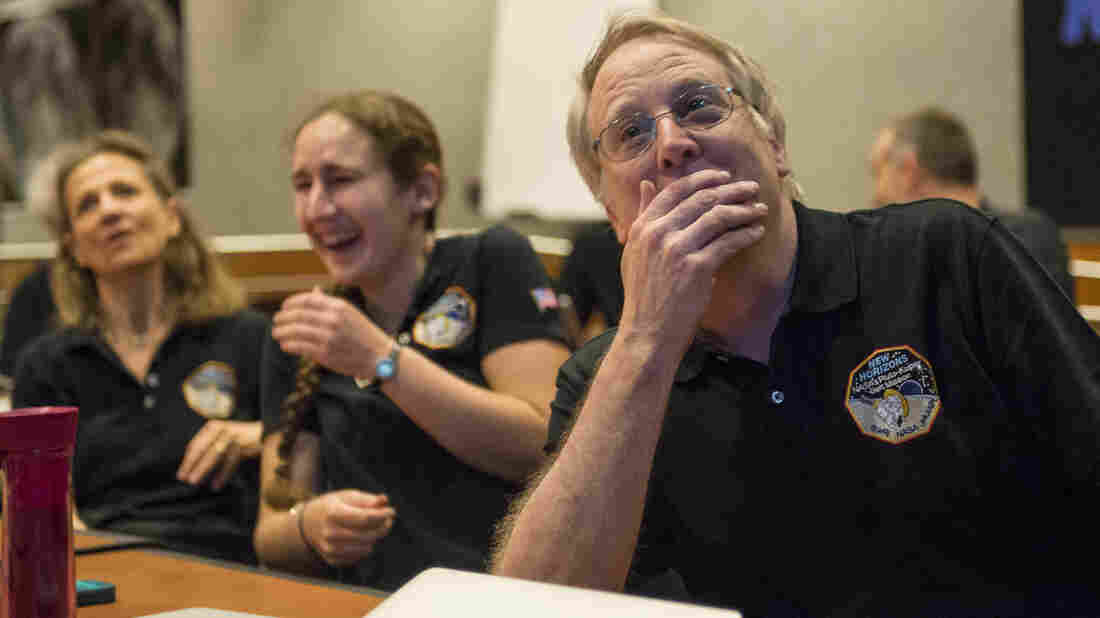 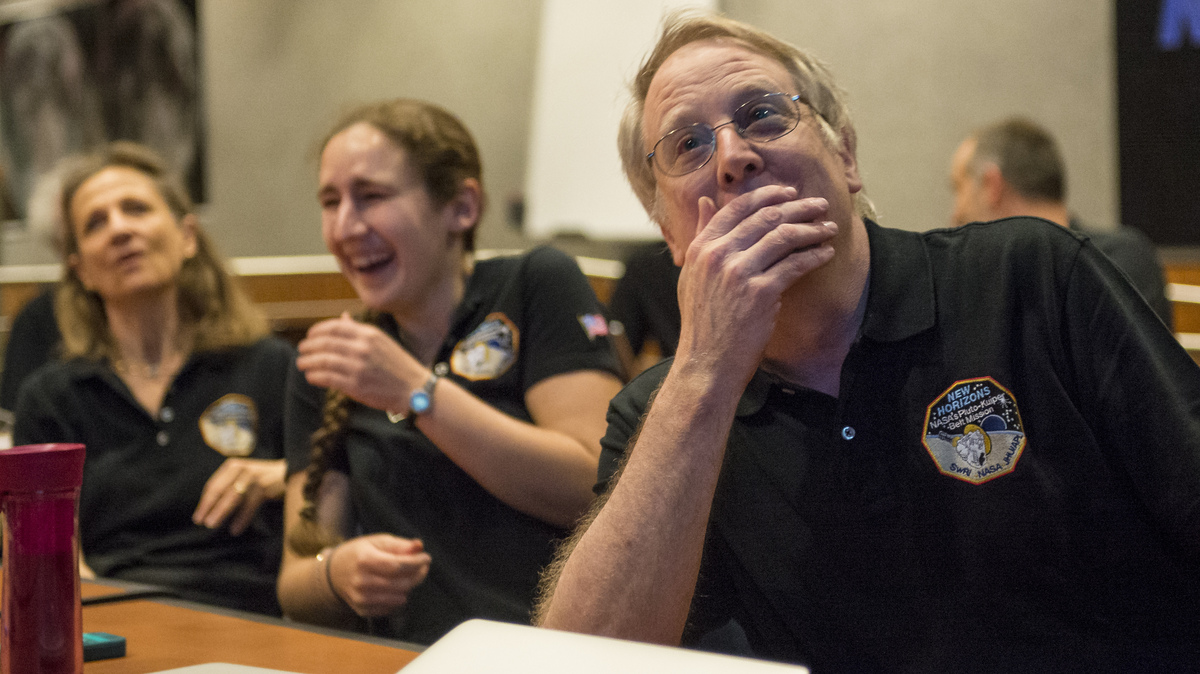 Members of the New Horizons science team react to seeing the spacecraft's sharpest image of Pluto before making its closest approach Tuesday. They monitored the Pluto mission from the Johns Hopkins University Applied Physics Laboratory in Laurel, Md.

"Pluto was discovered just 85 years ago by a farmer's son from Kansas, inspired by a visionary from Boston, using a telescope in Flagstaff, Arizona," said John Grunsfeld, associate administrator for NASA's Science Mission Directorate in Washington.

That discovery was made by Clyde Tombaugh — and a portion of his ashes are riding aboard New Horizons as it whizzes beyond Pluto toward the Kuiper Belt. For further perspective, we'll note that it was only six years ago that Venetia Burney, who was 11 when she had the idea of naming the new planet "Pluto," died.

Grunsfeld called today's feat "a great leap" in getting a close look at Pluto "and flying into a new frontier that will help us better understand the origins of the solar system."

In addition to a delay of more than 4 hours (due to the probe's distance from Earth), the rate at which new information about Pluto will trickle back to NASA would frustrate many Internet users.

Alice Bowman, the New Horizons mission operations manager, says the data rate is around 1,000 bits per second, with a maximum of around 4,000 bits. That's just a fraction of the traditional 56K speed of U.S. dial-up accounts.

"We wish it was 56K," Bowman said with a laugh at Tuesday's news conference.

But that slow data rate hasn't dampened excitement at NASA over the apparent success of the mission. Calling Pluto a complex and interesting world, Grunsfeld said this morning, "The best is yet to come."

A key revelation that's already come out about Pluto concerns its size — NASA says its diameter is 1,473 miles, or 2,370 kilometers, ending a debate that has raged since the planet's discovery in 1930.

More details about Pluto's unusual characteristics will no doubt add to a debate among scientists over how to categorize it because of its small size and other factors.

"Pluto also orbits at a funny angle compared to the other planets," as NPR's Geoff Brumfiel has reported. "And there are a whole lot of other Pluto-like things cluttering up the outer reaches of the solar system."

As it proceeds out beyond Pluto, New Horizons could keep sending data back to Earth for years to come.

Discussing its power system today, Alan Stern, the mission's principal investigator, said the spacecraft currently generates 202 watts through its radioisotope thermoelectric generator, or RTG, which converts the heat of radioactive decay into electricity. That power level will drop by around 3 watts every year he said — meaning that the spacecraft could be operational through the 2030s.

New Horizons' RTG works off of plutonium, which was named for Pluto, Stern noted, adding, "So, we sent a little plutonium back to Pluto."