Accessibility links
Kepler Telescope Introduces Earth To A Very Distant Cousin : The Two-Way The spacecraft has detected the nearest thing to Earth yet discovered — a planet that's a bit bigger and squarely inside the "habitable zone" for life. 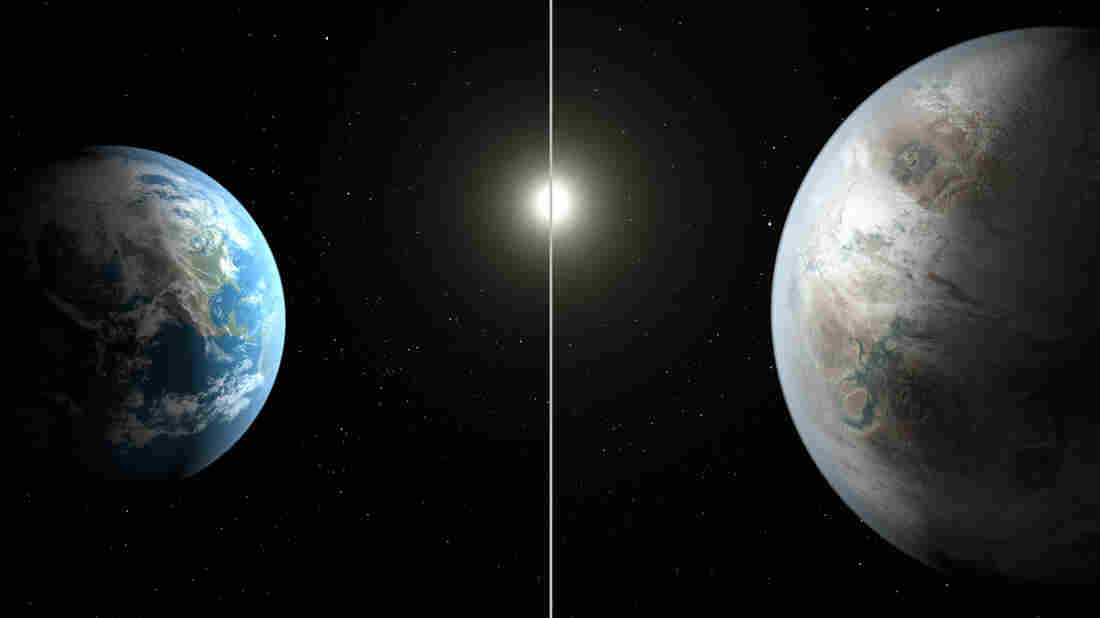 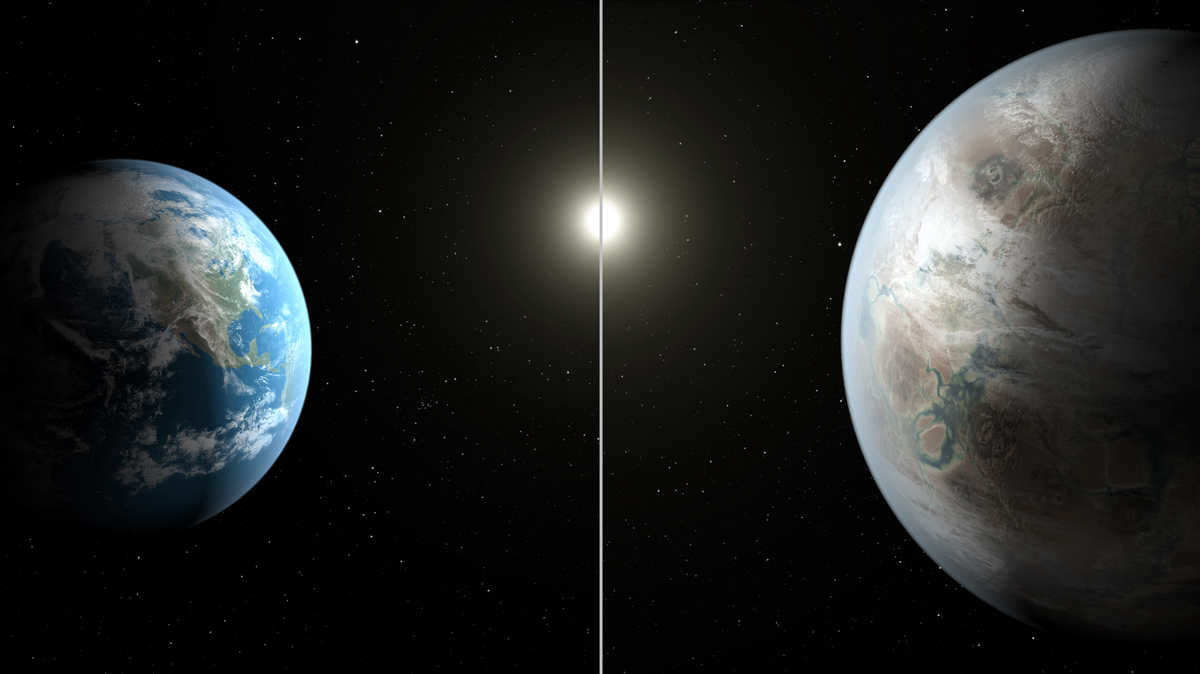 Artist's concept compares Earth (left) to the new planet, called Kepler-452b, which is about 60 percent larger in diameter.

NASA's planet-hunting Kepler Telescope has spotted the first roughly Earth-sized world orbiting in the "Goldilocks zone" of another star – offering perhaps the best bet so far for life elsewhere in the universe.

A year on Kepler-452b, which is about 1,400 light years from us in the constellation Cygnus, is 385 days, meaning its orbit is just a bit farther away from its star than the Earth is from the sun. That places it squarely within what planetary scientists call the habitable zone, or "Goldilocks" zone — not too cold and not too hot. 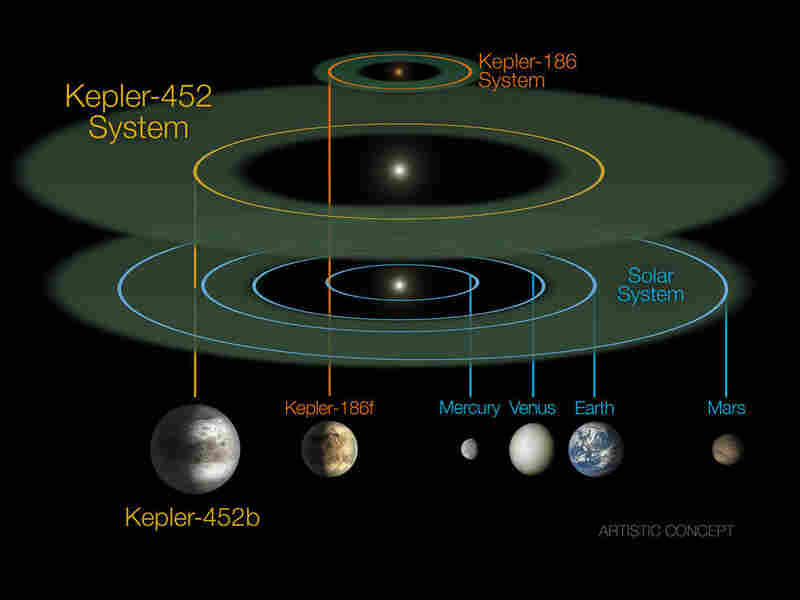 The size and scale of the Kepler-452 system compared alongside the Kepler-186 system and our solar system. By comparison, Kepler-186 is a miniature solar system that would fit entirely inside the orbit of Mercury. NASA/JPL-CalTech/R. Hurt hide caption 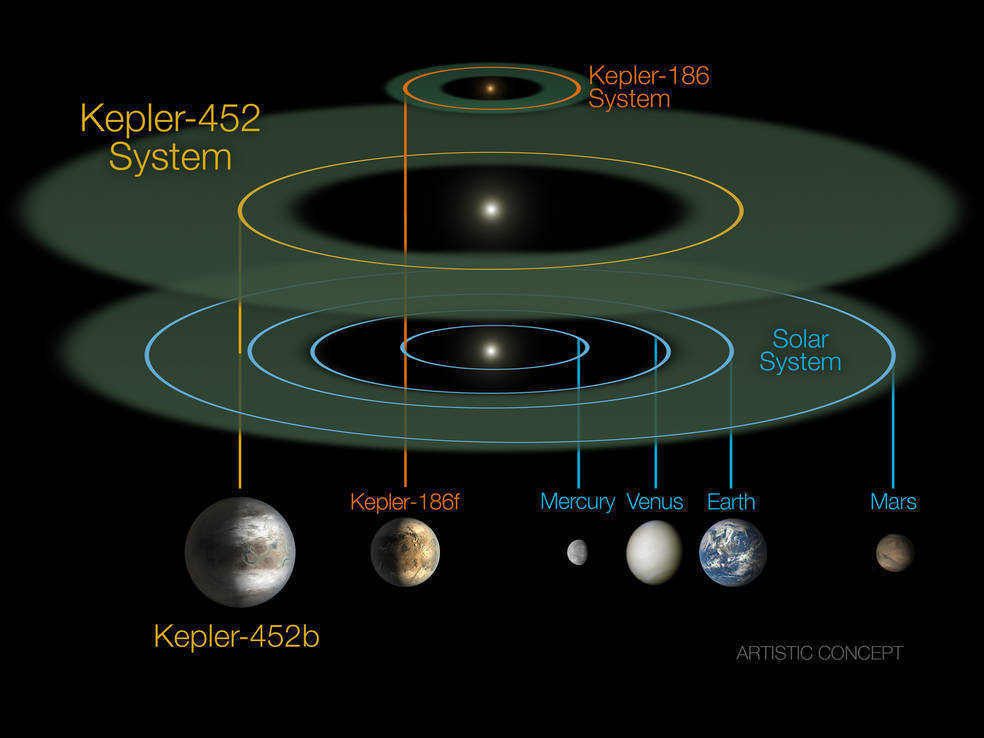 The size and scale of the Kepler-452 system compared alongside the Kepler-186 system and our solar system. By comparison, Kepler-186 is a miniature solar system that would fit entirely inside the orbit of Mercury.

"In my mind, this is the closest planet indeed to Earth," Jon Jenkins, Kepler data analysis lead at NASA's Ames Research Center in Moffett Field, Calif, said at a media briefing. "The star is a little bit older and a little bit bigger and brighter, so it's good that it's a bit farther from its star."

And that star is what astronomers label a class-G, "main sequence" star, the same as our sun. It is of average size and luminosity. While astronomers have not ruled out life around either smaller, dimmer or larger and brighter stars, Jenkins notes that it makes sense to start with what we know — which is that life is possible around a G-class star.

Although Kepler-452b is also 60 percent larger — and possibly five times as massive as Earth, with gravity about twice as great — there's a "better than even chance" that it is rocky, like Earth, Jenkins says. "But, it could be gaseous, its rocky terrain is only a prediction right now."

"It is the closest thing we have to a place that someone else might call home," he adds.

Kepler-452b is also in roughly the same period of planetary evolution as Earth. It's thought to be about 6 billion years old, compared to Earth's 4.5 billion years. But the estimate for Kepler-452b is based on models of stellar evolution, which could be off by as much as 2 billion years, which means on the lower end, it could be a contemporary of Earth, while on the upper end of the margin of error, it could be nearly twice as old, Jenkins says.

"It's awe-inspiring to consider that this planet has spent 6 billion years in the habitable zone of its star; longer than Earth," he said in a statement from NASA. "That's substantial opportunity for life to arise, should all the necessary ingredients and conditions for life exist on this planet."

The Kepler Telescope looks at a periodic, subtle dimming of distant stars that represents a slight blocking of sunlight as an orbiting planet passes between us and its parent star. But because the plane of the orbit must be parallel to Earth's line-of-sight to be detected, Jenkins says that each discovery of an Earth-like planet by Kepler leaves an estimated 50 others undetected.

Today, a total of 1,030 "extra-solar" planets have been identified, most — known as "hot Jupiters" — that are much larger and orbiting their stars much more closely than Earth to the sun.

"Exoplanets, especially small Earth-size worlds, belonged within the realm of science fiction just 21 years ago," the NASA statement says. "Today, and thousands of discoveries later, astronomers are on the cusp of finding something people have dreamed about for thousands of years — another Earth."

Scientists don't know if Kepler-452b could be habitable. Aside from not knowing what the planet's composition is, they also don't know what its atmosphere might be like.

"This is the beginning of a very long journey," said Didier Queloz, a professor of astrophysics at Cambridge University. He says that if scientists keep looking, he's sure they will find other habitable planets.