Accessibility links
Tonight, Look For A Rare (But Not Quite Blue) Moon : The Two-Way The modern definition of a "blue moon" has nothing to do with its color. 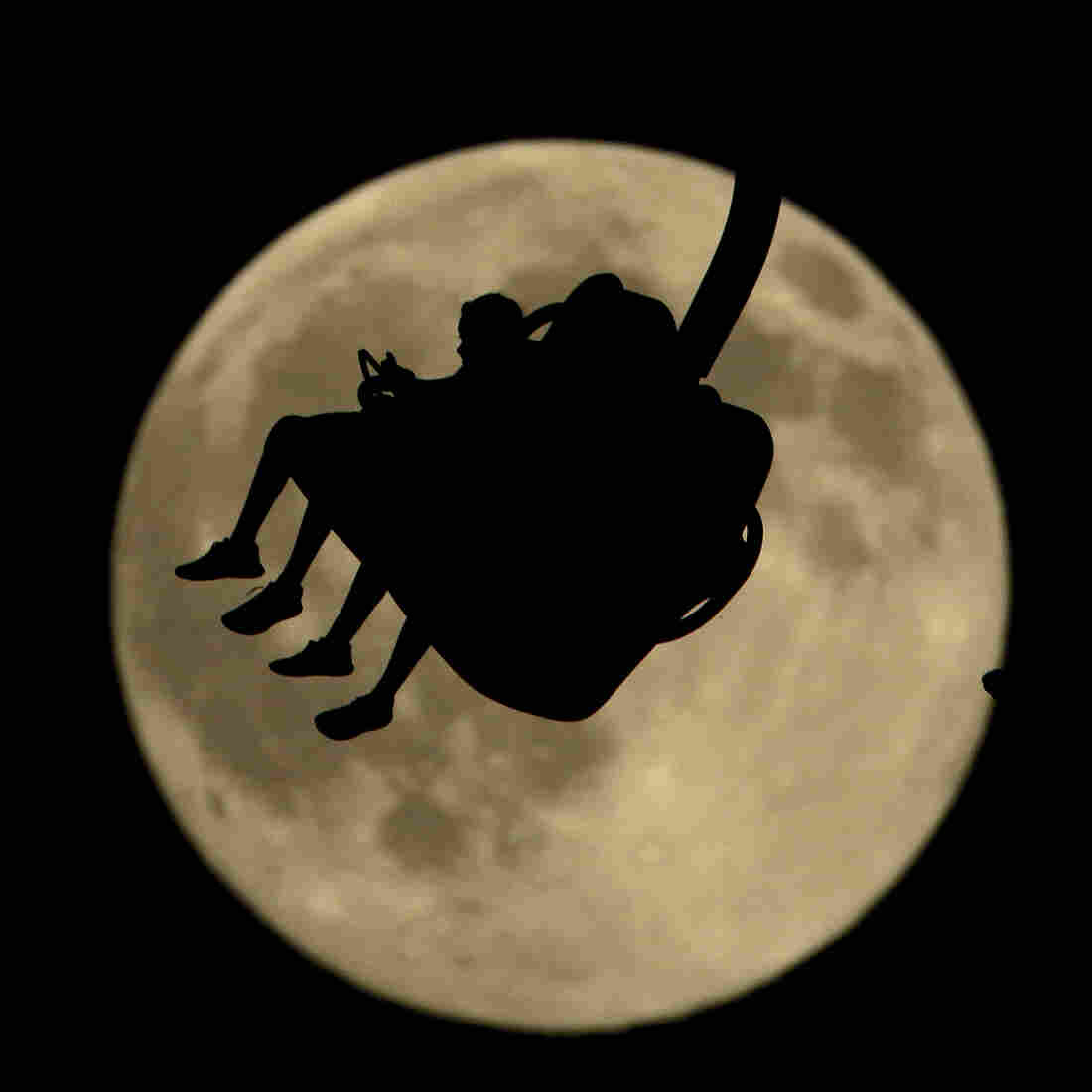 People are silhouetted against a nearly full moon as they ride an attraction at Worlds of Fun amusement park Thursday in Kansas City, Mo. July 31 marks the second full moon of the month, a rare occurrence that has come to be known as a "blue moon." Charlie Riedel/AP hide caption 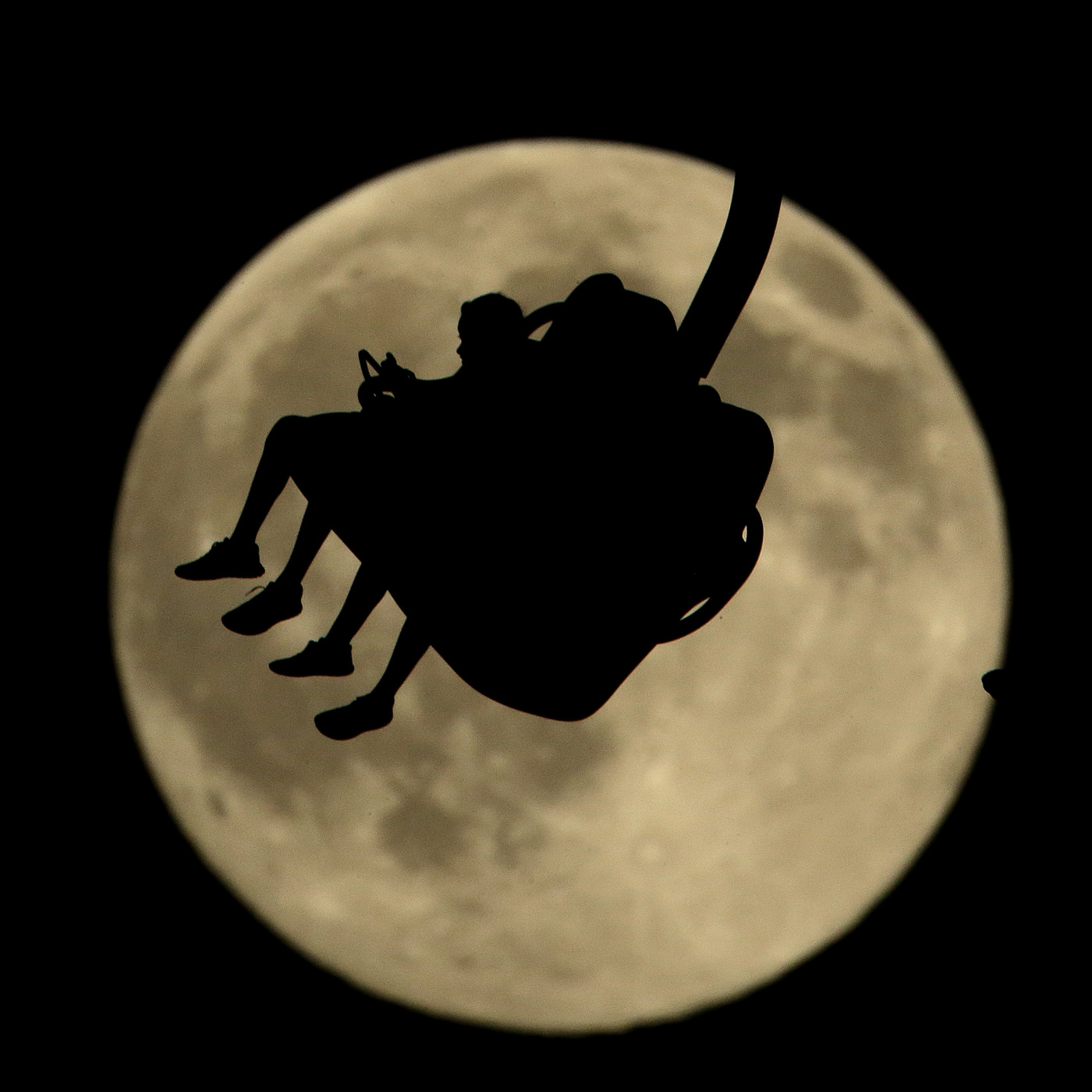 People are silhouetted against a nearly full moon as they ride an attraction at Worlds of Fun amusement park Thursday in Kansas City, Mo. July 31 marks the second full moon of the month, a rare occurrence that has come to be known as a "blue moon."

Get ready for a very rare event tonight — a blue moon.

But don't expect to see a new hue. A blue moon, at least according to the modern definition of the term, has nothing to do with color. It simply means a second full moon in the same calendar month.

As NASA explains in the video above: "Most blue moons appear pale gray and white, just like the moon you've seen on any other night."

And that doesn't happen very often (the last time was in August 2012, and the next time will be January 2018), so "once in a blue moon" is a phrase still worthy of a rare occurrence.

'Blue Moon' tomorrow! The 3rd of 4 full moons in Summer. Some parts of the moon really are blue! This from @tomkerss: pic.twitter.com/KA3GAUHKfP

This month, there was a full moon on July 1, and tonight, the last day of July, there's another. (Technically, the full moon occurred at 6:43 a.m. ET on Friday, about 20 minutes after it set for the U.S. East Coast, but it can still be seen again when the moon rises at 8:23 p.m. ET for Washington, D.C., residents.)

But the meaning of a "blue moon" has changed over time. It originally meant, according to folklore, something more ludicrous than rare. According to a 2012 Sky & Telescope magazine article: "[The] very earliest uses of the term were remarkably like saying the Moon is made of green cheese. Both were obvious absurdities, about which there could be no doubt. 'He would argue the Moon was blue' was taken by the average person of the 16th century as we take 'He'd argue that black is white.' "

But a secondary definition — the one about two full moons in a month — popped up (as an error, it turned out) in a 1946 issue of Sky & Telescope. Years later, in 1980, the mistake was amplified by the public radio program StarDate, and later, by the board game Trivial Pursuit. It stuck.

Philip Hiscock, a folklorist at Memorial University in Newfoundland, and Texas astronomer Donald W. Olson "helped the magazine sort all this out and admit the mistake back in 1999. The error led to the widely accepted definition of blue moon today: the second full moon in a given month. A blue moon occurs roughly once every 2.7 years," according to Space.com.

Even so, "on rare occasions, the moon can turn [the color] blue," according to the NASA video. It says: "A truly blue moon usually requires a volcanic eruption. Back in 1883, for example, people saw blue moons almost every night after the Indonesian volcano Krakatoa exploded with a force of a 100-megaton nuclear bomb."