Accessibility links
New Ebola Vaccine Has '100 Percent' Effectiveness In Early Results : The Two-Way The trial of the VSV-EBOV vaccine was called Ebola ça Suffit — French for "Ebola that's enough." Researchers say it's both effective and quick, with no new Ebola cases 6 days after vaccination. 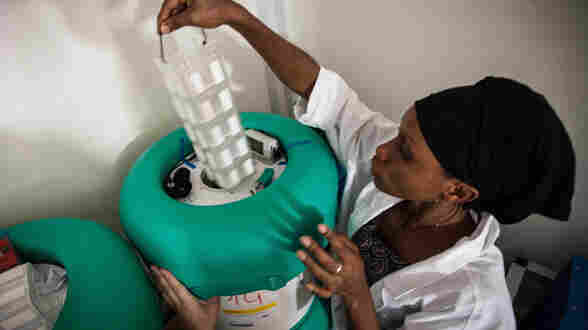 The Ebola vaccine from a trial in Guinea needs to be kept at a temperature of minus 60 degrees Celsius, the World Health Organization says. Storage devices use jet fuel to keep the right temperature for up to five days in the field. Sean Hawkey/Sean Hawkey hide caption 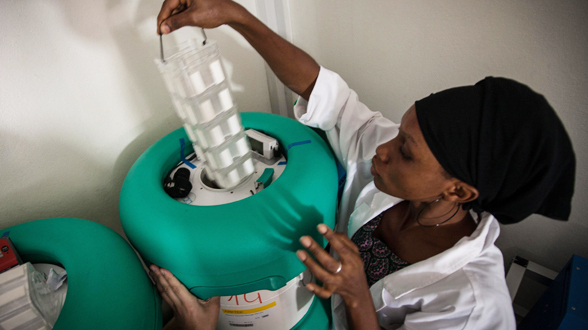 The Ebola vaccine from a trial in Guinea needs to be kept at a temperature of minus 60 degrees Celsius, the World Health Organization says. Storage devices use jet fuel to keep the right temperature for up to five days in the field.

In a development that could change the way the deadly Ebola disease is fought, researchers have announced promising results of a new vaccine's trial in Guinea, one of several countries affected by a historic outbreak in West Africa.

"The estimated vaccine efficacy was 100 percent," a team of researchers say.

The trial was called Ebola ça Suffit — French for "Ebola that's enough." Funded by the World Health Organization and other groups, it started in April and ended on July 20, relying on participants who consented to be part of the trial. The more than 20 researchers who took part published their findings in The Lancet medical journal on Friday.

"The current data basically tells us that the vaccine works to protect people against Ebola," says Dr. Bertrand Draguez, medical director of Médecins Sans Frontières, which took part in the research along with WHO and authorities in Guinea.

Draguez and other experts are heartened by the new results — but they also warn that as testing expands, the effectiveness rate of the vaccine will likely fall below 100 percent. The trial used the "ring vaccination" method, in which all suspected contacts receive treatment. No placebos were administered.

"Even if the sample size is quite small and more research and analysis is needed," Draguez says, "the enormity of the public health emergency should lead us to continue using this vaccine right now to protect those who might get exposed to the disease: contacts of infected patients and front-line workers."

The trial vaccine, formally called rVSV-ZEBOV but more commonly known as VSV-EBOV, was supplied by the pharmaceutical firm Merck Sharp & Dohme. The drug was initially developed by Canada's Public Health Agency and was tested as early as 2011.

To conduct the Guinea trial, researchers used newly confirmed Ebola cases to identify clusters of people with whom the patients had contact. On a random basis, those clusters then received the vaccine either immediately or after a 21-day delay.

Researchers say that for both groups — those who got the vaccine immediately and those who received it after a delay — no new Ebola cases were diagnosed starting at six days after vaccination.

The randomization phase of the trial was stopped this week, WHO says, "to allow for all people at risk to receive the vaccine immediately." It will also now include younger people than the adults involved in the trial. 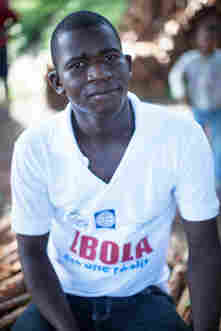 Mohamed Soumah, 27, was the first person to be vaccinated in the Ebola vaccine trial. "I was afraid," he says. "People in the village were saying that the injection was to kill me." Sean Hawkey/Sean Hawkey hide caption

The first person to receive the trial vaccine in Guinea was Mohamed Soumah, 27. He tells WHO:

"It wasn't easy. People in the village said that the injection was to kill me. I was afraid. I was the first one to be injected, the very first, here in my village on 23 March 2015. I've been monitored for 3 months and I've had no problems. The last follow-up, 84 days after the vaccination, was all clear."

The vaccine is administered via a shot to the upper arm. The researchers who ran the trial say their results suggest a single injection is highly effective, and that protection against Ebola can be established quickly. They're also still analyzing possible adverse reactions to the drug.

The interim findings on the Guinea trial are the latest to bolster the belief that VSV-EBOV could be the drug Ebola-fighters have been waiting for. Earlier this year, it showed positive results in clinical trials at the Walter Reed Army Institute of Research and the National Institute of Allergy and Infectious Diseases.

A Walter Reed release about that study explained how the drug is derived:

"VSV-EBOV is based in part on a genetically engineered version of vesicular stomatitis virus, which primarily affects rodents, cattle, swine and horses. Human VSV infections are rare and mild. In the VSV-EBOV investigational vaccine, the gene for the outer protein of VSV replaces the same gene segment of the Zaire Ebola virus species."

Researchers in the Guinea trial say the number of new clusters of potential patients is falling, because the rate of new diagnoses in the country has dropped. The next immediate step, they say, is to continue the trial and vaccinate more people. Last Friday, Guinea's government and medical ethics groups approved that plan.