Accessibility links
A Hitchhiking Robot's Journey West Ends Early ... In Philadelphia : The Two-Way The hitchBOT, as its creators named it, had already successfully traversed Canada and Germany. This summer, relying on the kindness of strangers, it wanted to travel from Massachusetts to California. 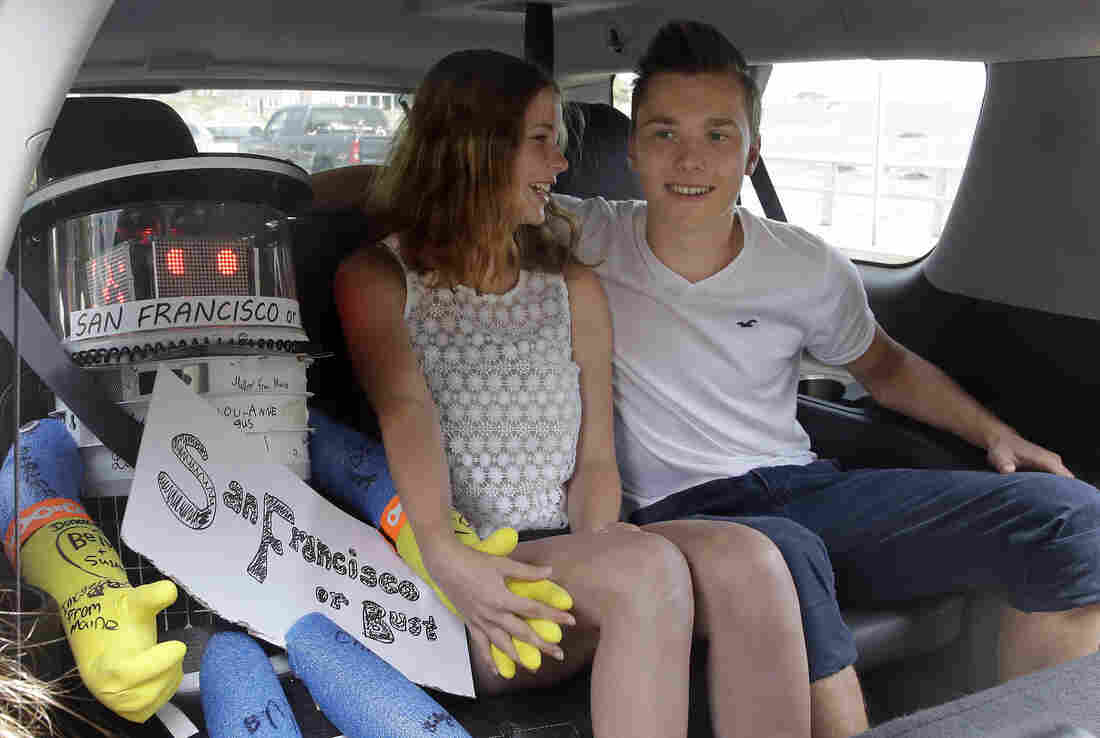 HitchBOT, a hitchhiking robot, sits with German tourists Sarah Strempel and Eric Vogel in the back seat of a vehicle as they and their companions prepare to leave Marblehead, Mass., after picking up hitchBot for its first ride on July 17. Stephan Savoia/AP hide caption 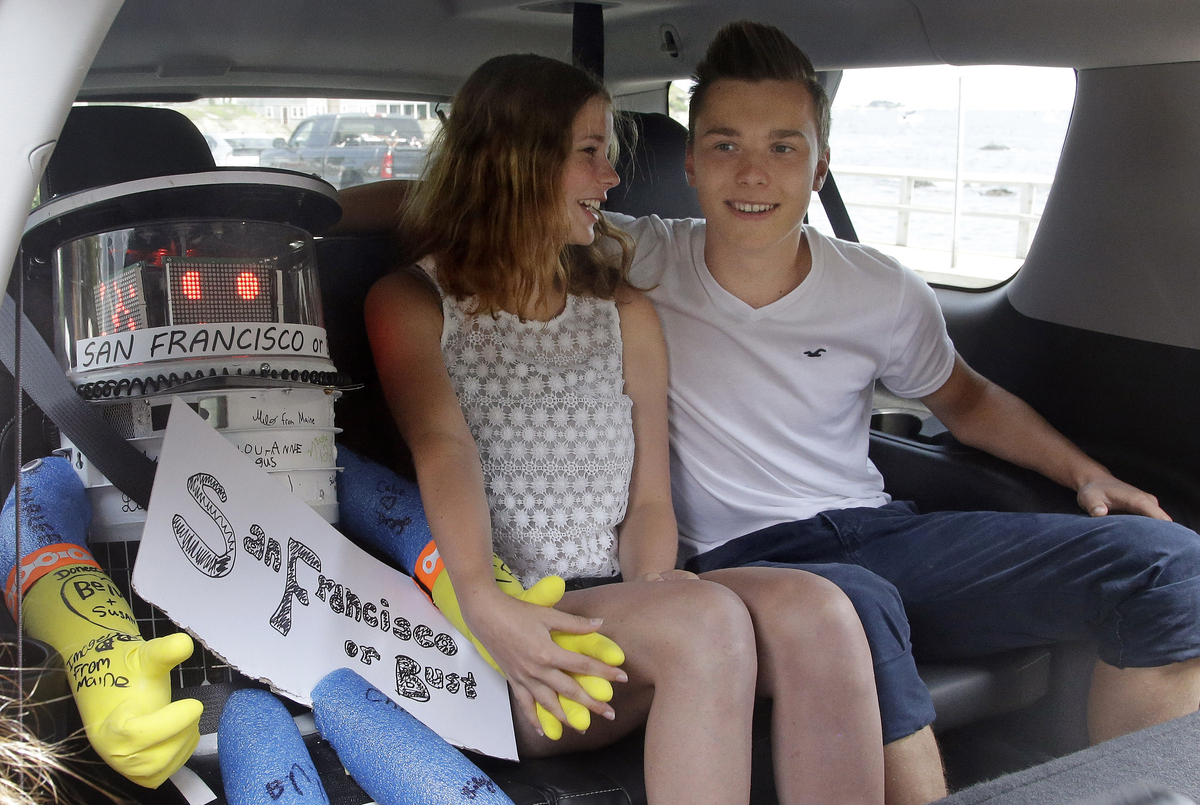 HitchBOT, a hitchhiking robot, sits with German tourists Sarah Strempel and Eric Vogel in the back seat of a vehicle as they and their companions prepare to leave Marblehead, Mass., after picking up hitchBot for its first ride on July 17.

After a bunch of really nice humans helped a hitchhiking robot traverse the length of Canada and most of Germany, the robot was going to try to make it from Massachusetts all the way to California.

HitchBOT is the brainchild of two Canadian social scientists. As Frauke Zeller and David Harris Smith explained it in a piece for the Harvard Business Review, it was an experiment meant to spark a discussion "about trust, notions of safety, and about our attitude towards technology."

For his third trip, hitchBOT, a cute robot with kitsch appeal — made of a bucket, a display and noodle appendages — was dropped off at the Peabody Essex Museum in Salem, Mass., on July 17.

The first few days, things went smoothly: With the help of friendly humans, who gave hitchBOT a ride and also charged him, he hit up Fenway Park and Providence and New Haven and even crossed off the first item on his bucket list: "See the lights in Times Square."

I thought I was bright and flashy, but the lights in Times Square have me beat. Next stop... who knows! pic.twitter.com/EKIQk4J1lB

Eventually, he made it to Philadelphia, where Jesse Wellens, of YouTube fame, showed him around town in the early morning hours of Saturday. At 3:57 a.m. ET on Saturday, Wellens tweeted that he was dropping hitchBOT off at Elfreths Ally, the oldest residential street in the U.S.

👽@edbassmaster & I just picked up a hitchhiking robot!! This night has gotten really weird. @hitchBOT pic.twitter.com/Q2ijplpAT1

On his blog, the robot wrote that his body was damaged but "my love for humans will never fade."

Lauren O'Neil, a journalist for the CBC, capped the news with a terrible picture:

HitchBOT's family — aka the researchers — issued this statement:

"hitchBOT's trip came to an end last night in Philadelphia after having spent a little over two weeks hitchhiking and visiting sites in Boston, Salem, Gloucester, Marblehead, and New York City. Unfortunately, hitchBOT was vandalized overnight in Philadelphia; sometimes bad things happen to good robots. We know that many of hitchBOT's fans will be disappointed, but we want them to be assured that this great experiment is not over. For now we will focus on the question 'what can be learned from this?' and explore future adventures for robots and humans."

In an interview with the CBC back in March, Smith said he hoped hitchBOT's journey would lead to some introspection on the way society works.

Maybe, he said, it could spark discussion on some big questions like: "What kind of people are we? Are we kind? Do we live in a safe world, you know, for the most part?"

Which leaves us with one question: What does this say about the U.S.?