Accessibility links
Review Of Leaked Test Results Shows Doping Is Widespread In Track And Field : The Two-Way The reports are based on the results of more than 12,000 blood tests from 5,000 athletes. Experts said analysis shows the sport's governing body has failed to take sufficient action against dopers. 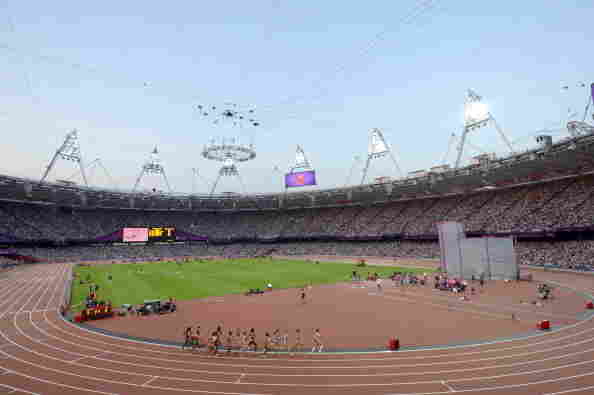 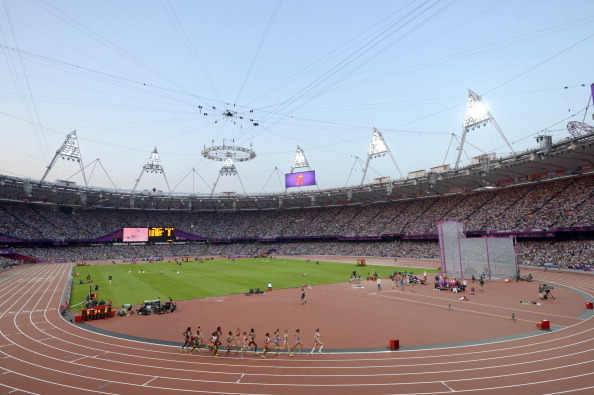 The track at Olympic Stadium during the London 2012 Olympic Games.

According to a review of the results of 12,000 blood tests, the world of track and field has a doping problem that is as big as the one cycling had at the height of Lance Armstrong's popularity.

That's according to the Sunday Times and Germany's public broadcaster ARD/WDR, which obtained a leak of documents with the bloodwork of 5,000 athletes.

The International Association of Athletics Federations, track and field's world governing body, said in a statement that, indeed, the analysis from these news organizations was based on "an IAAF Data Base of private and confidential medical data which has been obtained without consent."

According to a BBC reading of the data, it shows that a third of medals — including 55 golds — handed out at the Olympics and World Championships between 2001 and 2012 were won by athletes whose test results were suspicious.

More than 800 athletes, about one in seven of the 5,000 included in the leak, had blood results that experts consider "highly suggestive of doping."

"Two of the world's foremost anti-doping experts, who reviewed the files for this newspaper, said the data provided compelling evidence that the IAAF had failed to take sufficient action against athletes with highly suspicious tests.

"Robin Parisotto, a scientist who regularly reviews athletes' blood tests, said: 'Never have I seen such an alarmingly abnormal set of blood values ... So many athletes appear to have doped with impunity, and it is damning that the IAAF appears to have idly sat by and let this happen.'

"The second expert, exercise physiologist Michael Ashenden, who gave evidence against Armstrong, was equally appalled: 'For the IAAF to have harvested millions of dollars from the broadcasting of athletics events around the world ... yet only devote a relative pittance of those funds towards anti-doping, when they could see the terrible truth of what lay beneath the surface, is ... a shameful betrayal of their primary duty to police their sport and to protect clean athletes.'"

The World Anti-Doping Agency said that it was alarmed by the findings.

"These allegations require swift and close scrutiny to determine whether there have in fact been breaches under the World Anti-Doping Code and, if so, what actions are required to be taken by WADA and/or other bodies," WADA's president, Craig Reedie, said in a statement. "As always, WADA is committed to doing what's necessary to ensure a level playing field for clean athletes of the world."