Accessibility links
Another Bangladeshi Blogger Hacked To Death For Secular Views : The Two-Way Niloy Chakrabati Neel, who wrote under the pseudonym Niloy Neel, had advocated against Muslim extremism and in favor of women's rights. He is the fourth such social media activist killed this year. 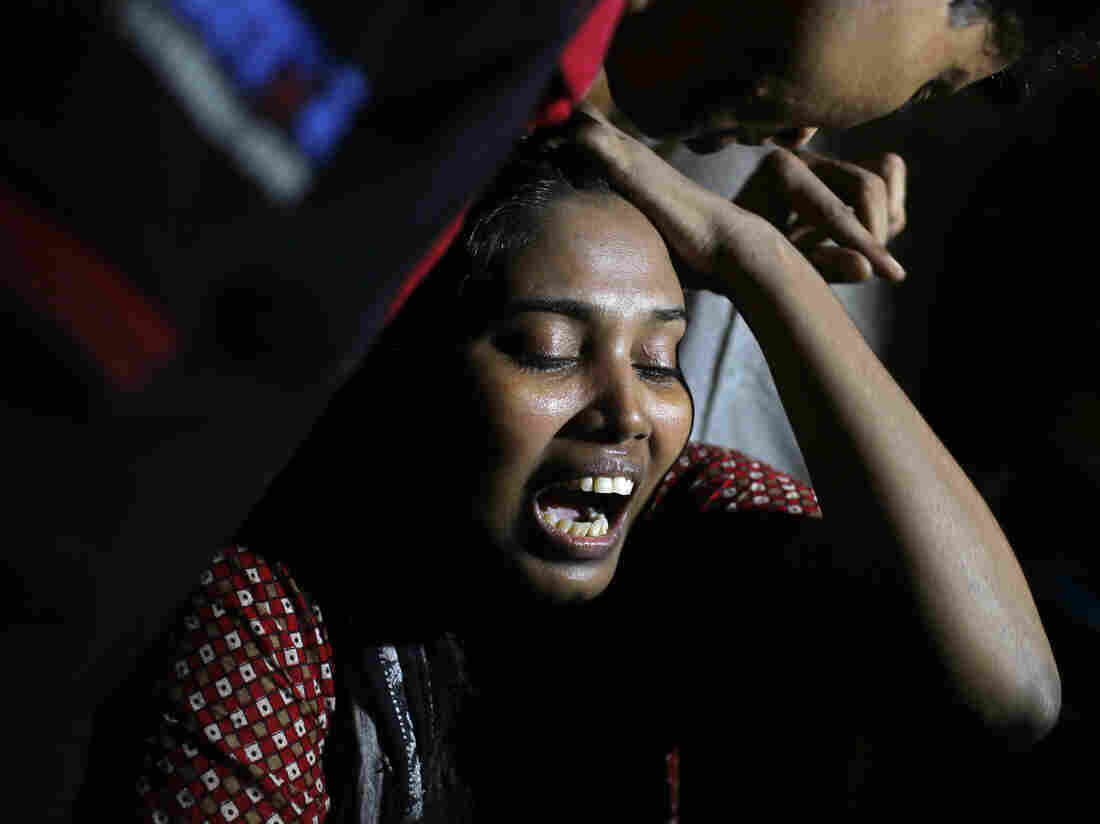 Ashamoni, wife of blogger Niloy Chakrabati, cries at her house in Dhaka, Bangladesh, on Friday after her secular activist husband was hacked to death by suspected Islamist extremists. A.M. Ahad/AP hide caption 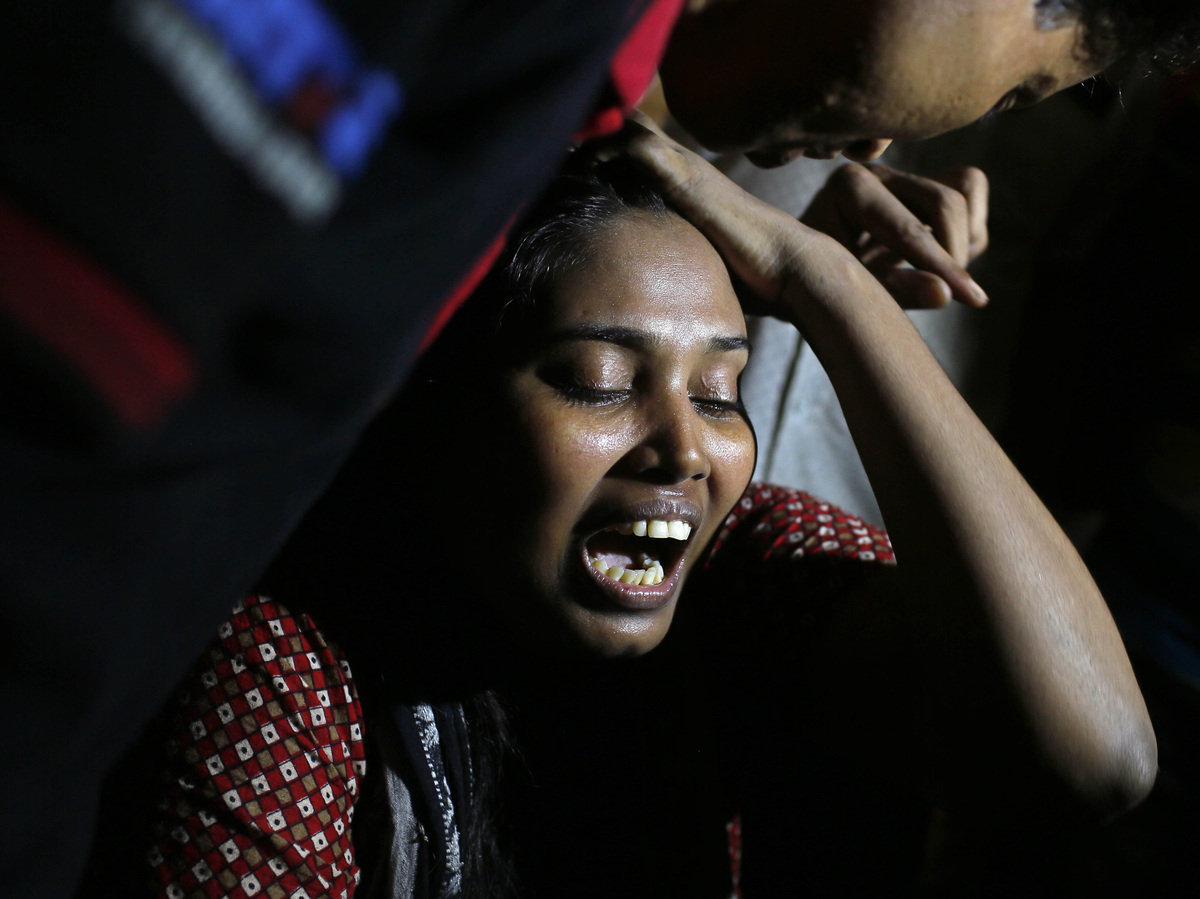 Ashamoni, wife of blogger Niloy Chakrabati, cries at her house in Dhaka, Bangladesh, on Friday after her secular activist husband was hacked to death by suspected Islamist extremists.

Niloy Chakrabati Neel, a Bangladeshi blogger who used the pen name Niloy Neel to criticize Muslim extremism, was hacked to death by a machete-wielding gang who broke into his apartment Friday. He is the fourth such social media activist to be killed in the South Asian country so far this year.

"They entered his room on the fifth floor and shoved his friend aside and then hacked him to death," Imran H. Sarker, head of the Bangladesh Blogger and Online Activist Network, or BOAN, tells Agence France-Presse. 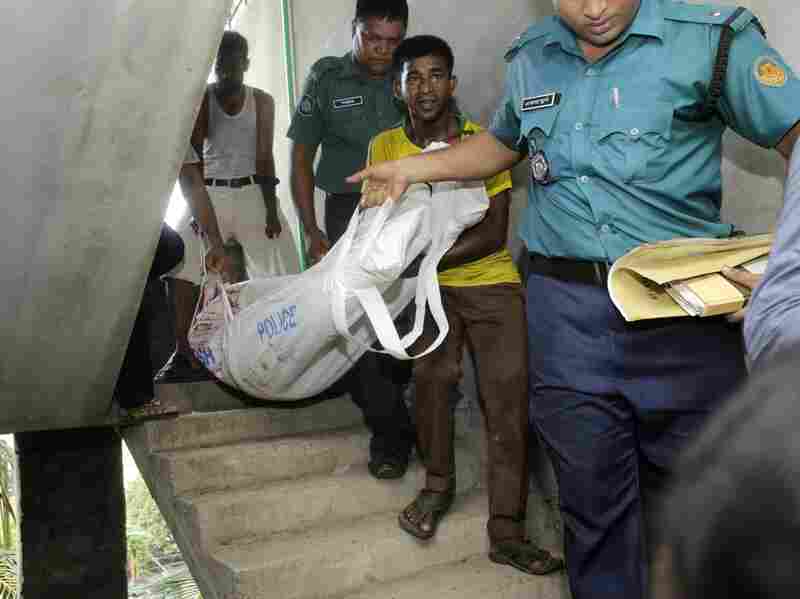 Police and others carry the body of activist and blogger Niloy Chakrabati, aka Niloy Neel, downstairs after he was slain in his upstairs apartment. Abir Abdullah/EPA/Landov hide caption 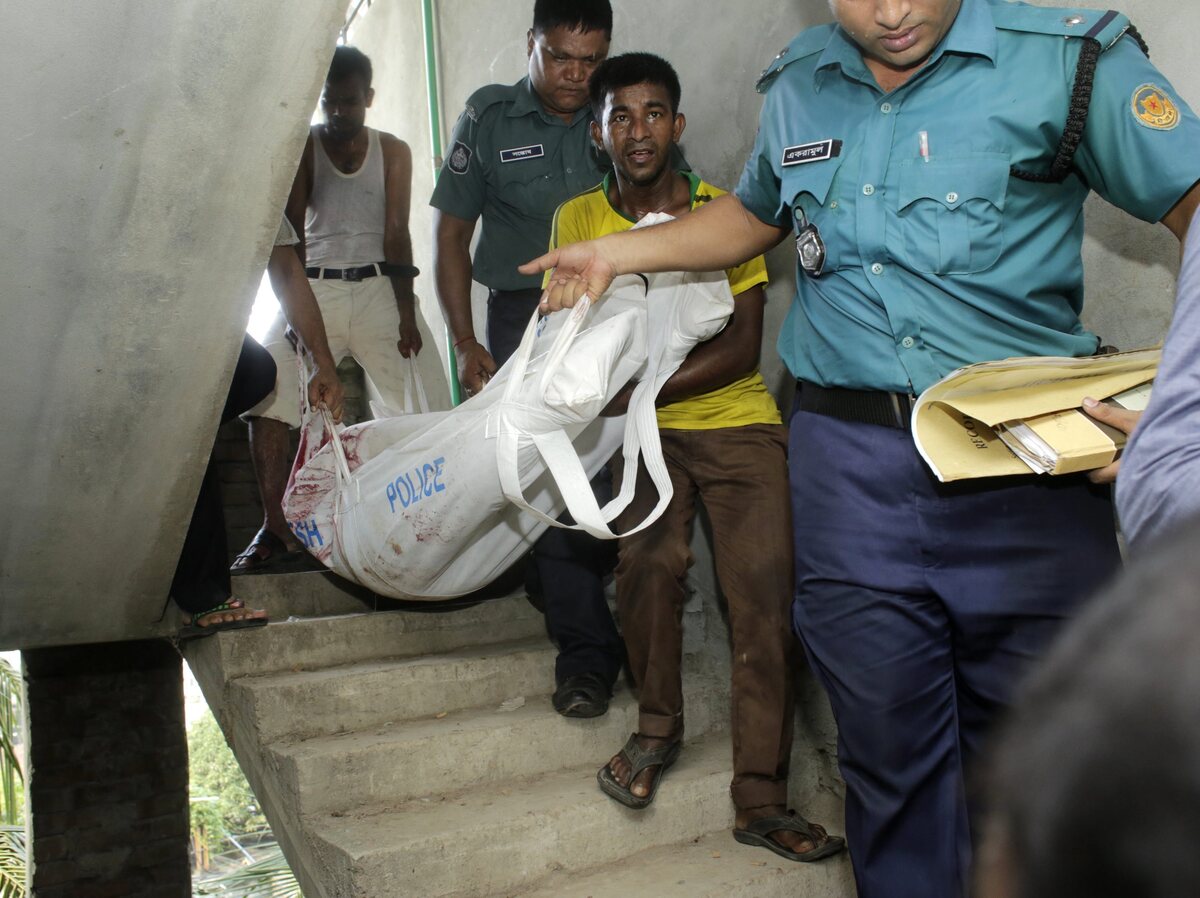 Police and others carry the body of activist and blogger Niloy Chakrabati, aka Niloy Neel, downstairs after he was slain in his upstairs apartment.

According to The Associated Press: "Hours after the assault, Ansar-al-Islam, which intelligence officials believe is affiliated with al-Qaida on the Indian subcontinent, sent an email to media organizations claiming responsibility for the killing and calling the blogger an enemy of Allah. The authenticity of the email could not be independently confirmed."

NPR's Julie McCarthy says that Sarker called Neel "a voice for the oppressed" who advocated women's rights as he denounced extremism. Sarker added that Chakrabati had been on a hit list and had been "targeted on social media" by Islamist fundamentalists. The three other bloggers slain this year were similarly targeted.

Sarker tells the BBC that Neel, Ananta Bijoy Das, Washiqur Rahman and Avijit Roy — all killed in the same way this year — had been on a list of 84 "atheist bloggers" drawn up and widely circulated by Islamic groups in 2013.

As we reported in February, Bangladeshi-born U.S. citizen Avijit Roy, described as a science writer and blog site moderator, was also hacked to death by a pair of attackers who assaulted him on a Dhaka street. The following month, 26-year-old Rahman was killed. In May, so was Das, 32. All were hacked to death by attackers in crimes in which Islamist groups subsequently claimed responsibility.

In the months before Neel's death, his pleas for police protection went unheeded, according to The Guardian.

"More than 150 writers, including Margaret Atwood, Salman Rushdie, Yann Martel and Colm Tóibín, signed a letter condemning the series of fatal attacks and calling on the country's government 'to ensure that the tragic events ... are not repeated'.

"All of the victims had been active on social media, criticizing the extremist Muslim ideologies that have gained strength in Bangladesh in recent years or arguing in favour of progressive causes. On his Facebook account, [Neel] frequently wrote in favour of women's rights.

Officially, Bangladesh is secular, but 90 percent of the population identifies as Muslim.