Accessibility links
EPA Says It Released 3 Million Gallons Of Contaminated Water Into River : The Two-Way The spill on Wednesday sent heavy metals, arsenic and other contaminants into a waterway that flows into the San Juan National Forest. Estimates of the spill's size have risen sharply since then. 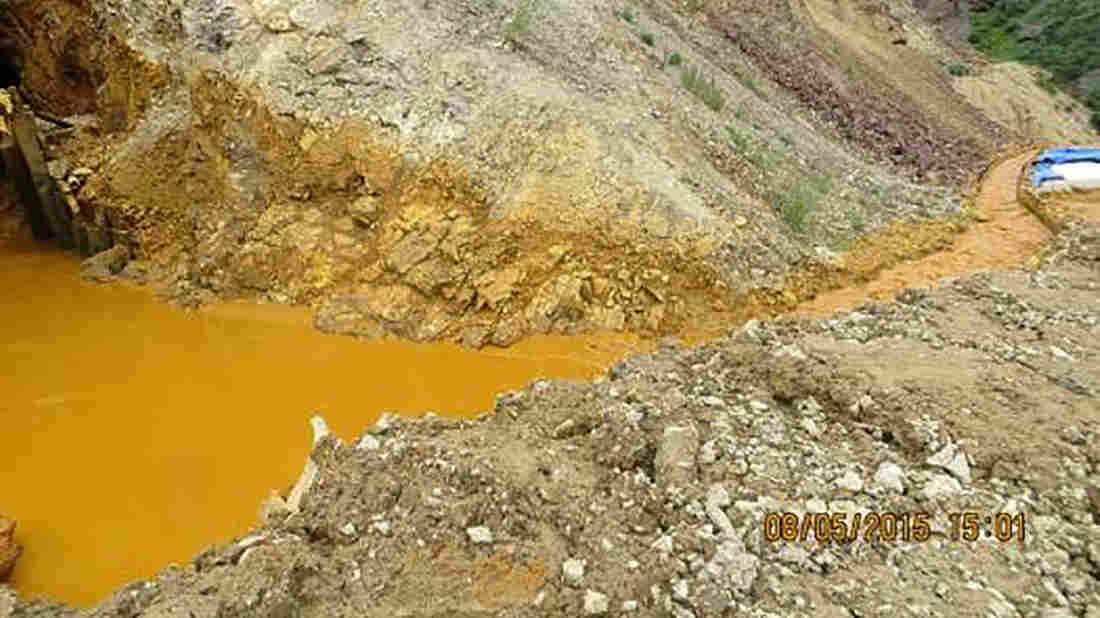 Contaminated wastewater is seen at the entrance to the Gold King Mine in San Juan County, Colo., in this picture released by the Environmental Protection Agency. The photo was taken Wednesday; the plume of contaminated water has continued to work its way downstream. Reuters /Landov hide caption 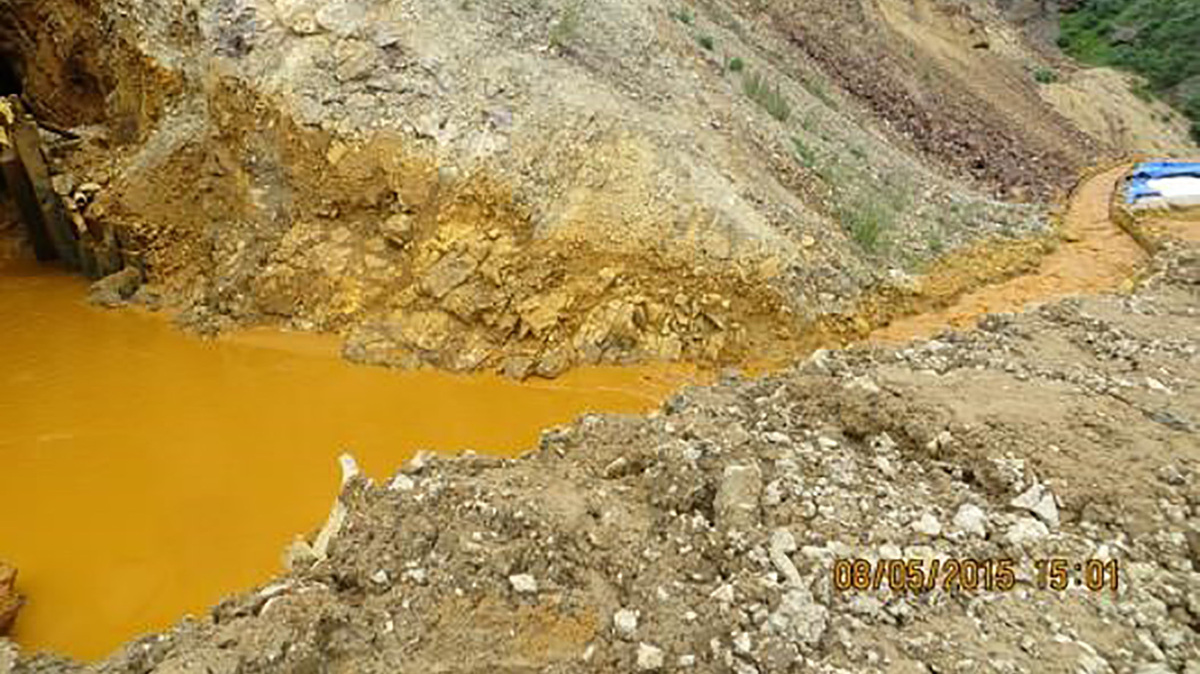 Contaminated wastewater is seen at the entrance to the Gold King Mine in San Juan County, Colo., in this picture released by the Environmental Protection Agency. The photo was taken Wednesday; the plume of contaminated water has continued to work its way downstream.

In an event that has led to health warnings and turned a river orange, the Environmental Protection Agency says one of its safety teams accidentally released contaminated water from a mine into the Animas River in southwest Colorado.

The spill, which sent heavy metals, arsenic and other contaminants into a waterway that flows into the San Juan National Forest, occurred Wednesday. The EPA initially said 1 million gallons of wastewater had been released, but that figure has risen sharply.

"The EPA now estimates 3 million gallons of wastewater spilled from the mine into the Animas River. They also confirmed lead concentrations had spiked over 3,500 times historic levels just above the town of Durango.

"Debra McKean, a toxicologist with the agency, says levels peak and then decrease as the contamination flows downriver.

" 'Yes, those numbers are high and they are scary because they seem so high,' she said, 'especially compared to the baseline numbers.'

"New test results show significant increases in arsenic levels, and some mercury has been detected. Durango and La Plata County have declared a state of emergency."

Officials are warning residents, farmers and outdoor enthusiasts to avoid the water. The spill occurred at Cement Creek, releasing contaminants that will eventually make their way downstream toward New Mexico and Utah, in a river system that links to the Colorado River and Arizona.

Howard adds that the Glen Canyon National Recreation Area has issued a statement saying, "Most river sediments will settle out of the water when the river current slows at Lake Powell."

GCNRA spokeswoman Cynthia Sequanna tells Howard that in the slackwater of the lake, "We expect most sediments will drop out in the 40-mile section of the San Juan River that is part of Lake Powell."

The Colorado River also runs through Lake Powell in that same section.

After waiting a day to reveal the incident, the EPA has been criticized by those who say it didn't announce the accident soon enough. EPA officials say it took time to realize the magnitude of the spill.

The EPA team had been working on the Gold King Mine near Silverton, an area that has many disused mines.

As The Durango Herald's Chase Olivarius-Mcallister reported in 2014, "Scientists say it's the largest untreated mine drainage in the state, and problematic concentrations of zinc, copper, cadmium, iron, lead, manganese and aluminum are choking off the Upper Animas River's ecosystem."

"For most of the West's history, miners were basically allowed to run willy-nilly across the landscape, burrowing for gold, silver or other valuable minerals. According to Ronald Cohen, an environmental engineer at the Colorado School of Mines, whenever you dig into a mountain, 'at some point you are going to hit water.'

"That water, when it runs through the rocks in a mine, hits a mineral called pyrite, or iron sulfide. It reacts with air and pyrite to form sulfuric acid and dissolved iron. That acid then continues through the mine, dissolving other heavy metals, like copper and lead. Eventually, you end up with water that's got high levels of a lot of undesirable materials in it."

Reporting on how the breach occurred, Colorado Public Radio says that an EPA team used heavy equipment to dig into a dam at the Gold King Mine site, hoping to install a drain pipe. But because of the volume of water and the dam's makeup of soil and not rock, it spewed zinc, iron and contaminants into a runoff channel that leads to the nearby creek.

An earlier version of this post incorrectly credited the Durango Herald's report to KUNC.