Accessibility links
Maryland's 'Batman,' A Real-Life Superhero, Dies : The Two-Way A few years ago, Lenny B. Robinson, 51, made national news after he was stopped by police. Video from the stop showed him wearing a full Batman costume and driving a black Lamborghini. 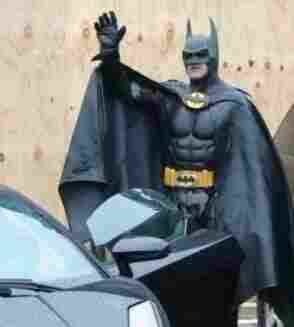 Lenny B. Robinson, a 51-year-old man who came to be known as a real-life superhero in a Batman costume, was killed in a traffic accident on Sunday.

The Washington Post reports that Robinson had stopped on the side of the road in Maryland after his Batmobile broke down. The Post adds:

"Robinson was having engine trouble and stopped 'partially in the fast lane,' according to a state police news release. He was checking the engine when the Batmobile was struck by a Toyota Camry. The Batmobile then hit him. Robinson was pronounced dead at the scene.

"The crash is still under investigation, and no charges have been filed. The driver of the car, who wasn't injured, declined to comment."

We first wrote about Robinson in 2012. At the time, he had made news because he had been pulled over by police in Montgomery County, Md., for not having the correct plates on his car — at the time a black Lamborghini. Video of the stop went viral because it showed Robinson in full Batman costume:

As news organizations looked into who this guy was, they found out he was a real-life superhero.

"Robinson is a 'self-made success' in the business world who is giving back some of his good fortune by donning his disguise and then heading to local hospitals to see sick kids and deliver presents 'to up-and-coming superheros who first need to beat cancer and other wretched diseases.' "

An earlier version of this post said that Robinson was driving a black Lamborghini at the time of the accident. In fact, he was driving a custom-made vehicle.