Accessibility links
Americans Hailed As Heroes For Subduing Gunman On Train In Belgium : The Two-Way An Air Force serviceman, a U.S. National Guardsman and a Sacramento State University student brought down the gunman. One was slashed several times with a box cutter and remains in the hospital.

Americans Hailed As Heroes For Subduing Gunman On Train In Belgium

Americans Hailed As Heroes For Subduing Gunman On Train In Belgium 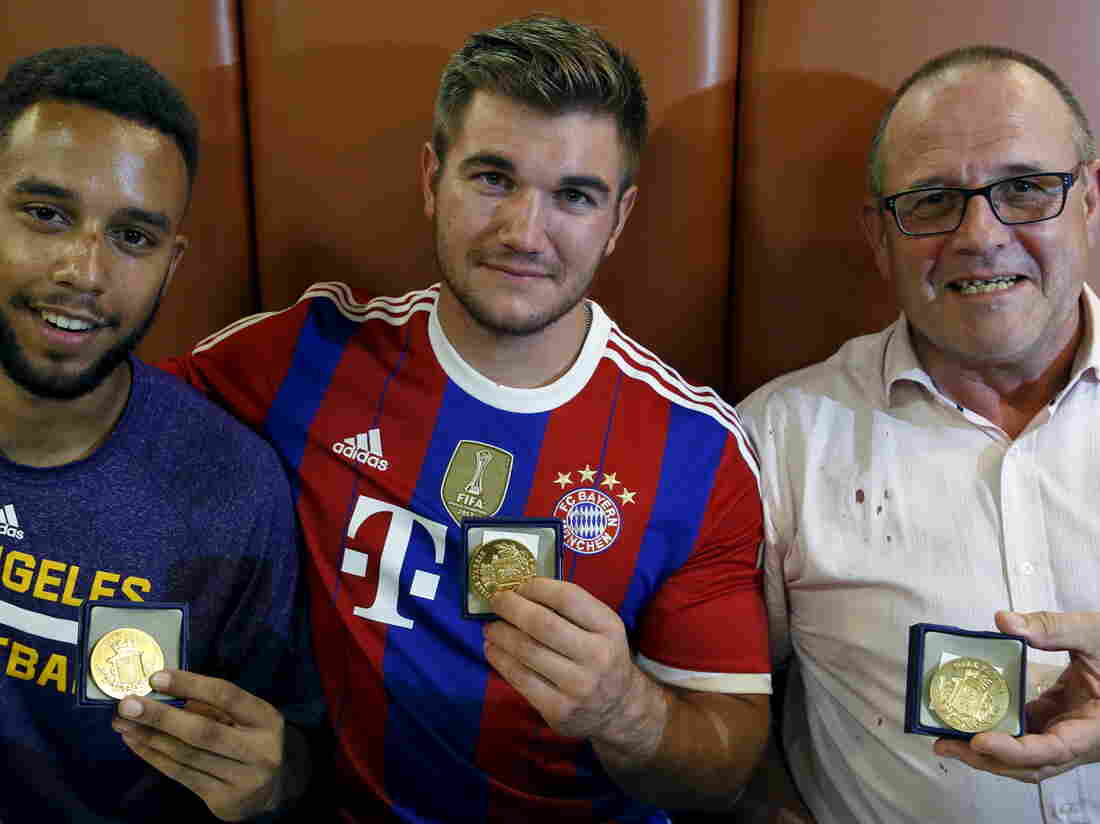 Three men who helped to disarm an attacker on a train from Amsterdam to France, from left to right, Anthony Sadler, Alek Skarlatos and Chris Norman, a British man living in France, pose with medals they received for their bravery at a restaurant in Arras, France. A fourth man, American Spencer Stone, was wounded in the take-down and remains in the hospital. Pascal Rossignol/Reuters/Landov hide caption

Three men who helped to disarm an attacker on a train from Amsterdam to France, from left to right, Anthony Sadler, Alek Skarlatos and Chris Norman, a British man living in France, pose with medals they received for their bravery at a restaurant in Arras, France. A fourth man, American Spencer Stone, was wounded in the take-down and remains in the hospital.

More details are emerging about the incident in which three Americans, including two U.S. servicemen traveling in civilian clothes, overpowered, tackled and subdued a Kalashnikov-wielding gunman aboard a high-speed train in Belgium.

One of those who helped take down the assailant was slashed multiple times with a box cutter in the scuffle and remains hospitalized with non-life threatening wounds, according to The Associated Press.

The high-speed train, run by Thalys, a French-Belgian government consortium, was halted at Arras in northern France following Friday's incident, which occurred as it was traveling near Brussels, en route from Amsterdam to Paris.

France's Interior Minister Bernard Cazeneuve said President Francois Hollande thanked the men, identified as three men traveling together, Air Force serviceman Spencer Stone; Alek Skarlatos, a National Guardsman from Roseburg, Ore., and Anthony Sadler, a student at Sacramento State University. Hollande spoke to them by telephone and is expected to meet them in person sometime in the next few days. Chris Norman, a British man living in France, also helped, according to the BBC. 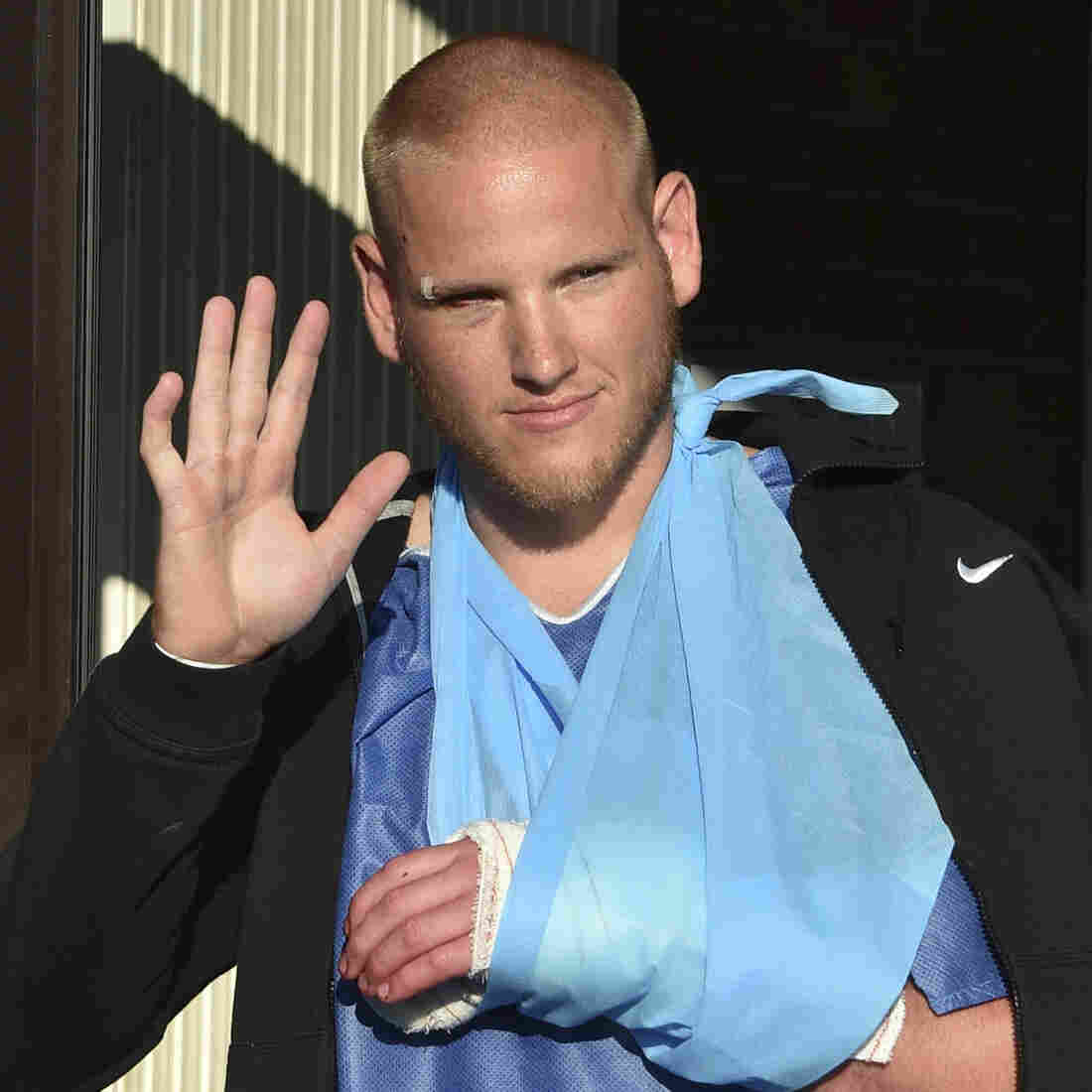 U.S. Air Force Airman First Class Spencer Stone waves as he departs the Clinique Lille Sud, which specializes in hand injuries, in Lesquin, France, on Saturday. He was one of several men who helped subdue the train assailant. Reuters/Landov hide caption 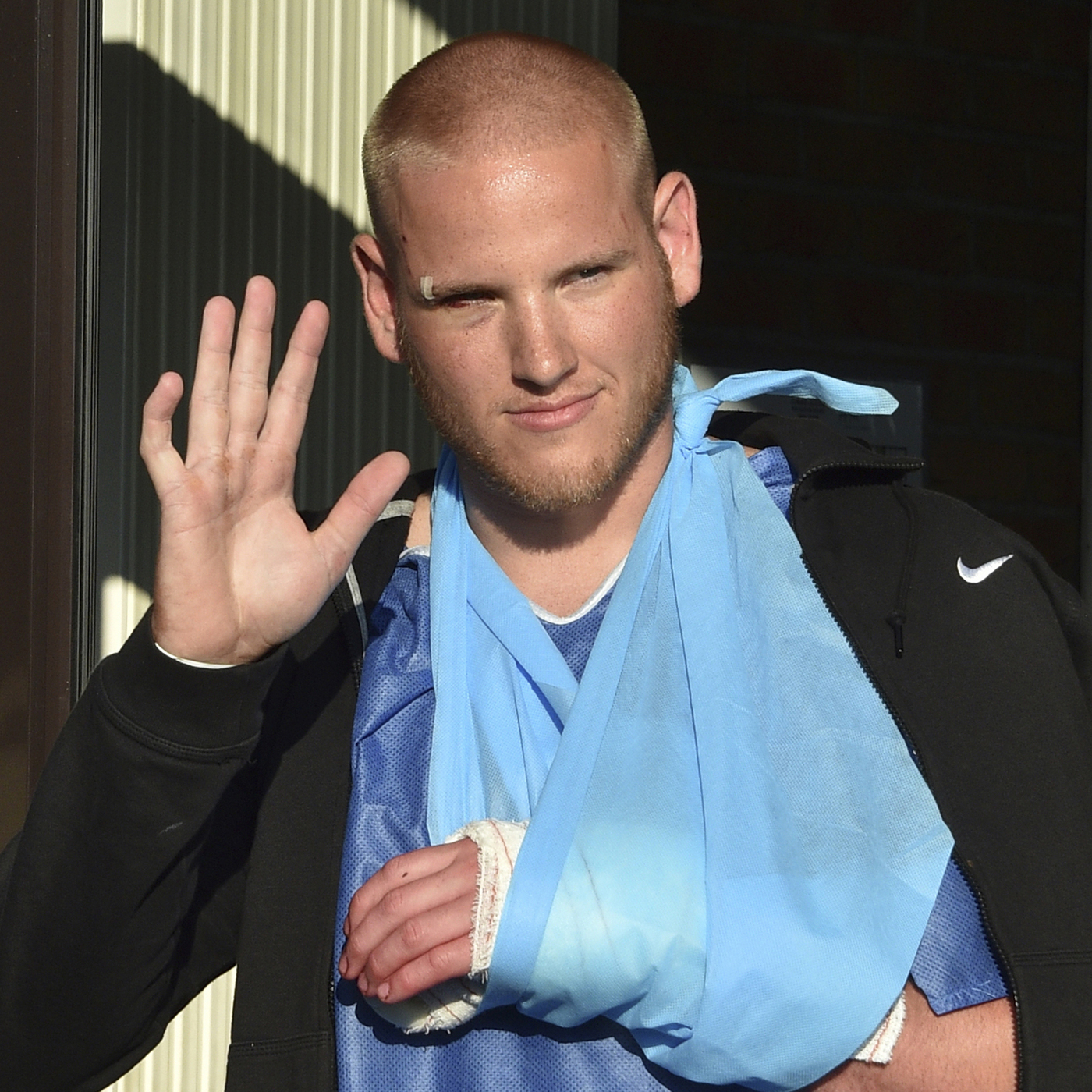 U.S. Air Force Airman First Class Spencer Stone waves as he departs the Clinique Lille Sud, which specializes in hand injuries, in Lesquin, France, on Saturday. He was one of several men who helped subdue the train assailant.

In a statement from Gen. Philip M. Breedlove, the U.S. Commander in Europe, Spencer was identified as an Airman First Class and Skarlatos as a Specialist.

"These men are heroes. Actions like this clearly illustrate the courage and commitment our young men and women have all the time, whether they are on duty or on leave," Breedlove said in a statement. "We are extremely proud of their efforts and now are praying for our injured airman to have a speedy recovery."

On Friday, President Obama praised the "courage and quick thinking" of the passengers, echoing remarks by Cazeneuve.

Obama, who is vacationing at Martha's Vineyard, spoke with French President Francois Hollande by telephone on Saturday. A White House statement said that Hollande agreed with Obama that the three Americans, a British man living in France and a Frenchman who first encountered the attacker "demonstrated remarkable bravery."

French media had initially reported that the suspect was subdued by two U.S. Marines.

Cazeneuve said that when a French passenger tried to enter a toilet on the train, he encountered the gunman and tried, but failed to overpower him. The assailant's gun was then fired. A French-American passenger was hit by the bullet.

That's when, Sadler tells the AP, the three heard a gunshot and breaking glass and then saw a train employee running down an aisle, followed by a man carrying an automatic rifle.

"As he was cocking it to shoot it, Alek just yells, 'Spencer, go!' And Spencer runs down the aisle," Sadler said. "Spencer makes first contact, he tackles the guy, Alek wrestles the gun away from him, and the gunman pulls out a box cutter and slices Spencer a few times. And the three of us beat him until he was unconscious."

Skarlatos was quoted by Sky News as saying "Spencer got to the guy first and grabbed the guy by the neck."

"I grabbed the handgun, got that away from the guy and threw it. Then I grabbed the AK-47 (Kalashnikov), which was at his feet, and started muzzle-bumping him in the head with it," Skarlatos said. "Everybody just started beating the guy while Spencer held the chokehold until he went unconscious."

According to France24, when Skarlatos checked the AK-47, it had jammed and would not have been able to fire. The cartridge for the handgun had also been dropped, he said.

Norman, a British man living in France, was also hurt trying to subdue the attacker.

"I came in at the end of it all and helped get him under control," he said at a news conference in Arras. "The guy pulled out a cutter and started cutting Spencer — he cut behind his neck and nearly cut his thumb off."

At a later news conference in Arras, Norman, who spoke alternately in French and English, was asked why he sprung into action.

"Either you sit down and you die, or you get up and you die. It was as simple as that," he told reporters. "We've seen enough of these attacks to know that they will kill everyone."

Norman said he used a necktie to restrain the assailant, described him as looking like he was from North Africa but "small in build, slim."

Norman said the man "put up a pretty good fight, but Spencer Stone is a pretty strong man."

"Let's just say that the two Americans had a go at him, he couldn't do much more."

The AP reports that Cazeneuve, speaking to reporters in Paris on Saturday, said that the alleged attacker appears to be a man flagged by Spanish authorities last year for having links to Islamic radical movements, but that his identity has not been confirmed.

"It is important to be careful about his identity which is not yet established with certainty," Cazeneuve was quoted by Reuters as saying. He added: "If the identity he has declared is confirmed, he is a 26-year-old man of Moroccan nationality identified by the Spanish authorities to French intelligence services in February 2014 because of his connections to the radical Islamist movement."

The AP quotes an official who spoke on condition of anonymity said the suspect had traveled to Syria and then returned to France.

The news agency, quoting the Paris prosecutor's office says that French authorities "are questioning the attacker and are expected to speak to at least one of the Americans on Saturday about what happened. Counterterrorism police are leading the investigation."