Accessibility links
George W. Bush: I Will Never Forget 'Misery And Ruin' Of Katrina : The Two-Way A decade after the storm that damaged his presidency, Bush visited one of the schools that was nearly wiped out.

George W. Bush: I Will Never Forget 'Misery And Ruin' Of Katrina

George W. Bush: I Will Never Forget 'Misery And Ruin' Of Katrina 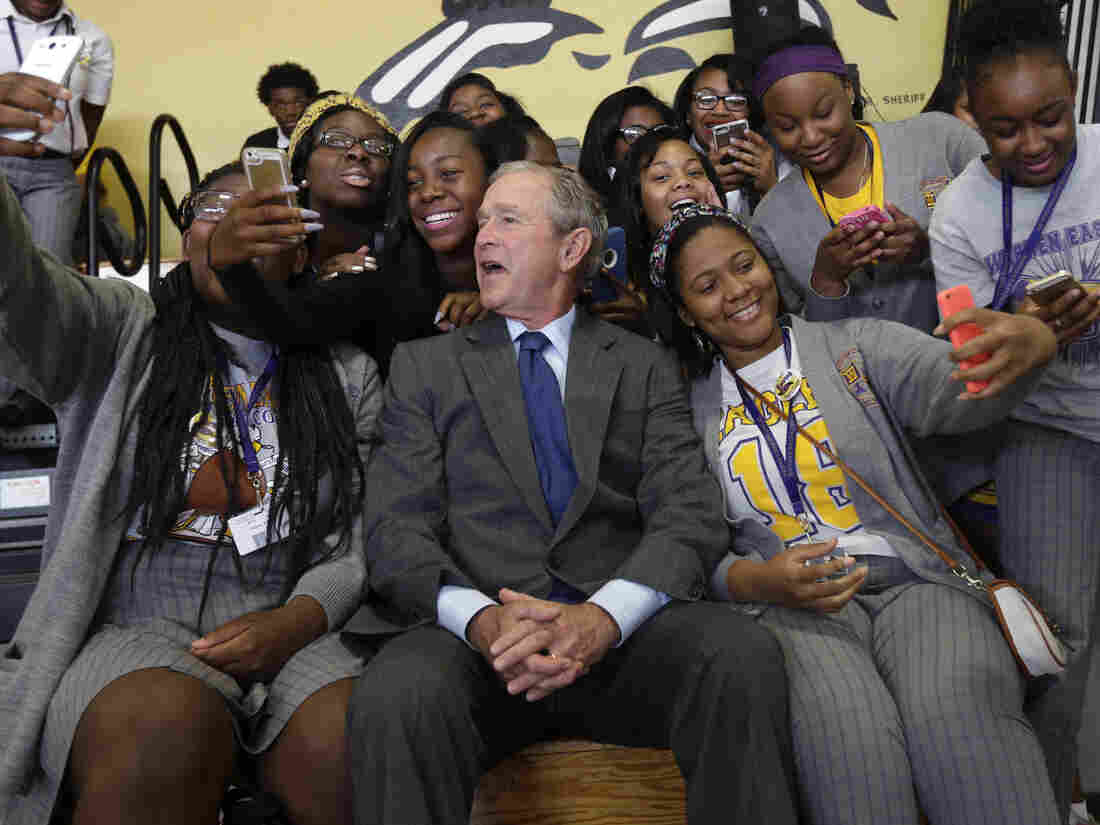 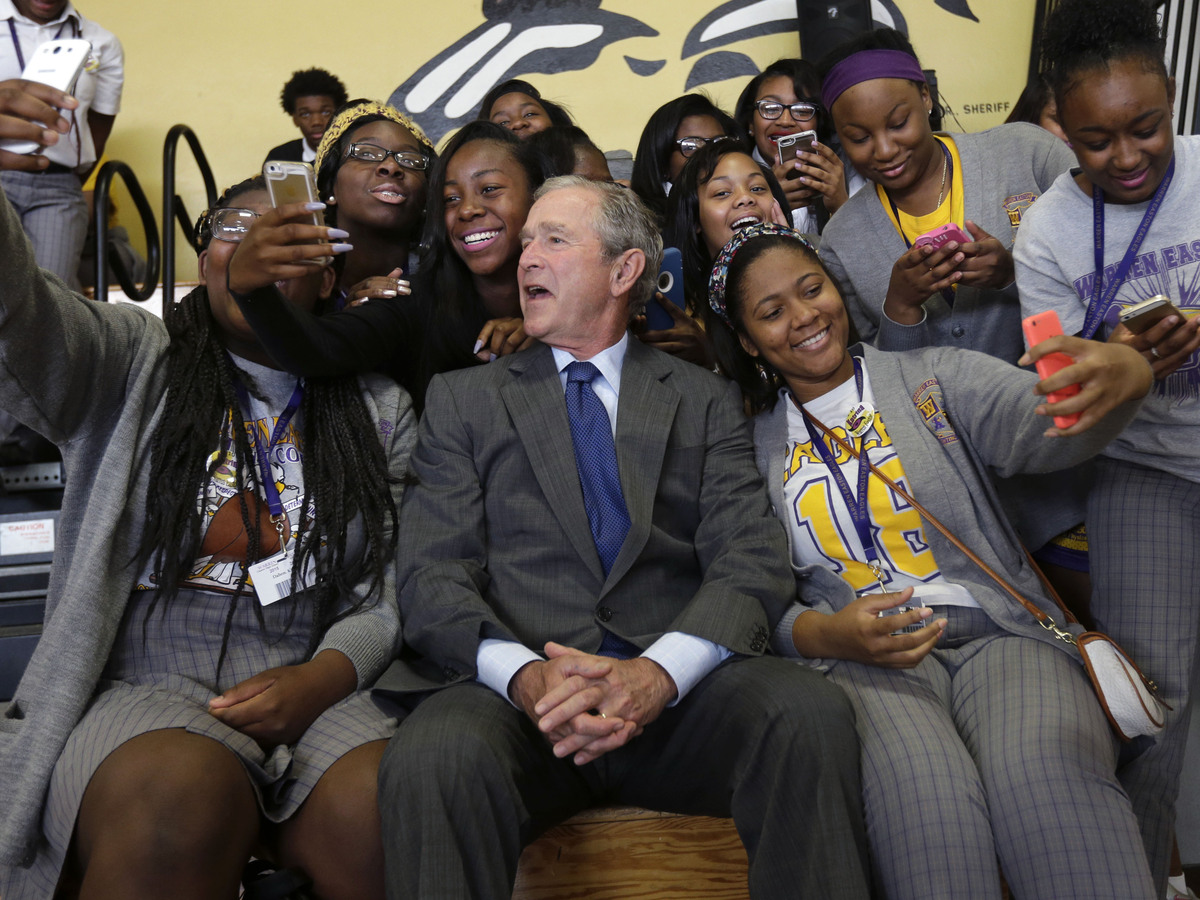 Former President George W. Bush poses for photos with students at Warren Easton Charter High School in New Orleans on Friday. He was visiting the city for the 10th anniversary of Hurricane Katrina.

Former President George W. Bush, whose legacy was marred by the federal government's response to Hurricane Katrina, visited New Orleans today to mark the 10th anniversary of the tragedy.

Bush and his wife, Laura, arrived Friday morning at Warren Easton Charter High School, where they met with students as well as New Orleans Mayor Mitch Landrieu and Kathleen Blanco, who was Louisiana's governor when Katrina hit in August 2005.

In a speech at the school, the former president said he will never forget the images of "misery and ruin" from Katrina. He said New Orleans was a city where "the levies gave out but ... [the] people never gave up."

Swept Up In The Storm: Hurricane Katrina's Key Players, Then And Now

As KOIN reports, the choice of Warren Easton is symbolic. The school, which Laura Bush raised money to help save, fought to stay open despite being badly flooded. When it reopened in 2006 "nearly every student who attended was considered homeless because they lived in trailers sent to hurricane victims by the Federal Emergency Management Agency or slept on couches," the television station says.

"Because of the success schools like this have achieved, it gives a message to Americans that New Orleans is back, and better than ever," George W. Bush told students and teachers at the school.

U.S. News & World Report writes: "Katrina ... illustrated the perils that presidents face when they fail to deal with such calamities in a timely and efficient way, as George W. Bush discovered a decade ago. Strange as it may seem at this time of instant communication and the 24-hour news cycle, Bush didn't pay attention to the biggest news story of the moment because he was on vacation and allowed himself to get isolated from the country."

Bush's visit comes a day after President Obama told a crowd in the city that the disaster was largely man-made and was an example of "a failure of government to look after its own citizens."

Bush, in his 2010 memoir, Decision Points, acknowledged the damage that the response to Katrina had done to his legacy: "in a national catastrophe the easiest person to blame is the president" and "Katrina presented a political opportunity that some critics exploited for years."

"I should have recognized the deficiencies sooner and intervened faster," Bush wrote. "The problem was not that I made the wrong decisions; it was that I took too long to decide."

Michael Brown, who was director of the Federal Emergency Management Agency during the storm in 2005, wrote an op-ed appearing in Politico on Thursday, titled "Stop Blaming Me for Hurricane Katrina."

In it, Brown said he wanted to step down from the job in the spring of 2005, but was persuaded by White House Chief of Staff Andy Card to stay through that year's hurricane season.

Brown says the federal government did not have the authority to unilaterally order the evacuation of New Orleans ahead of Katrina and describes indecision by then-Gov. Blanco and then-New Orleans Mayor Ray Nagin:

"Prior to Katrina making landfall, I asked then-National Hurricane Center Director Max Mayfield to forcefully explain on a secure video conference call with Blanco and Nagin the catastrophe they were potentially facing if they failed to evacuate at least two or three days prior to landfall," Brown writes. "When that didn't work, I called President Bush at the ranch and implored him to call Mayor Nagin and encourage him to evacuate his city. The president called; the mayor dallied."

But in an interview with WDSU in New Orleans, Blanco had a different take on the events a decade ago.

"If FEMA had been able to deliver the buses that Mike Brown told me he had the ability to get instantly, ... I kind of boil it down to this, if the buses had run on time, the trauma would not have existed," she said.

"The first time when I got the president's help, they didn't really want to help, but I had to embarrass them to help, kind of had to threaten to go to war on the White House, you know," Blanco said. "I got 4 billion (dollars) from that threat, and then I had the audacity to come back, you know, about a year later and say you know 'boys and girls, we need another 3 billion,' you know, to get the job done."