Accessibility links
Kentucky Marriage License Dispute 'Up To Courts,' Governor Says : The Two-Way "I have no legal authority to relieve her of her statutory duty by executive order or to remove her from office," Gov. Steve Beshear says of Rowan County Clerk Kim Davis. 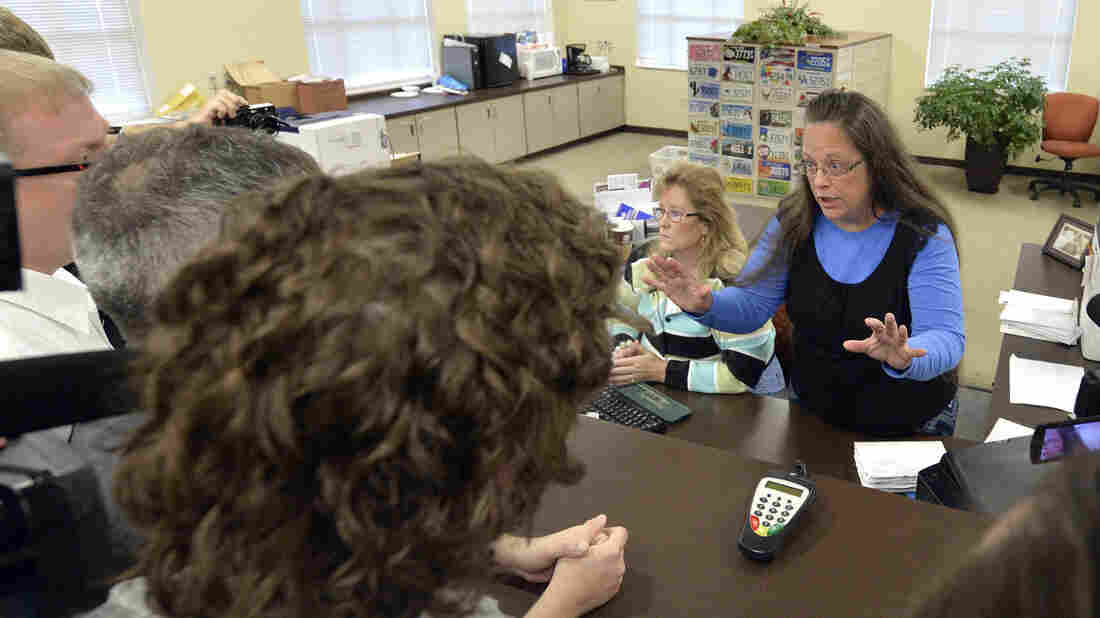 Rowan County Clerk Kim Davis (right) will appear in court Thursday to answer a motion to hold her in contempt, after her office again refused to issue marriage licenses at the Rowan County Courthouse in Morehead, Ky. Timothy D. Easley/AP hide caption 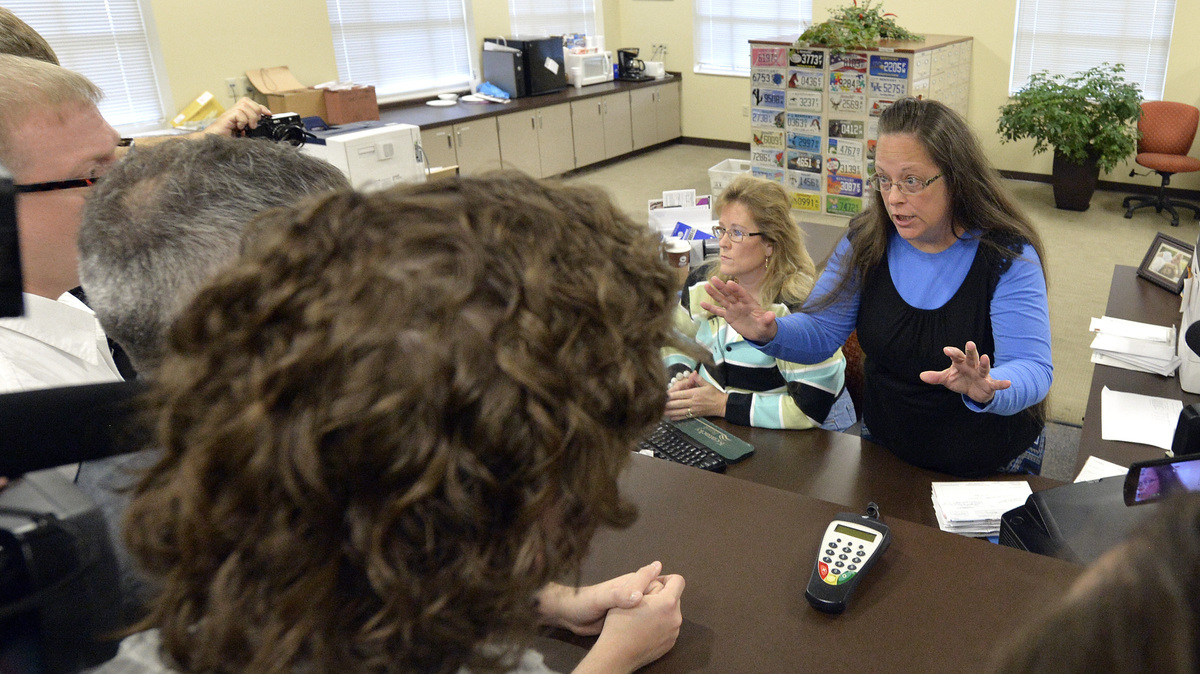 Rowan County Clerk Kim Davis (right) will appear in court Thursday to answer a motion to hold her in contempt, after her office again refused to issue marriage licenses at the Rowan County Courthouse in Morehead, Ky.

Kentucky's Gov. Steve Beshear says he's powerless to stop Rowan County Clerk Kim Davis from refusing to issue marriage licenses to same-sex couples — something she has done for consecutive days, flouting rulings from federal courts that include the Supreme Court and prompting a motion to hold her in contempt of court.

"I have no legal authority to relieve her of her statutory duty by executive order or to remove her from office," Beshear says, issuing a statement in which he also says he won't call a special session to give the state Legislature a chance to rewrite Kentucky's statute about county clerks' power.

As Eyder noted for the Two-Way Tuesday morning, when Davis was asked by same-sex-marriage advocates Tuesday under what authority was she allowed to refuse a request for a marriage license, she replied, "under God's authority."

In the latest legal development, plaintiff April Miller, who along with Karen Roberts was denied a marriage license Tuesday morning, filed a motion in district court to hold Davis in contempt. The motion, which the ACLU of Kentucky filed on Miller's behalf, calls for Judge David L. Bunning "to impose financial penalties sufficiently serious and increasingly onerous to compel Davis' immediate compliance without further delay."

The plaintiffs do not want Davis jailed, the motion says.

"She was ordered back to court on Thursday, to determine whether she will be held in contempt for her actions," Kentucky Public Radio's Ryland Barton reports for All Things Considered.

Davis issued her own statement Tuesday — here's a section, from member station WFPL:

"I never imagined a day like this would come, where I would be asked to violate a central teaching of Scripture and of Jesus Himself regarding marriage. To issue a marriage license which conflicts with God's definition of marriage, with my name affixed to the certificate, would violate my conscience. It is not a light issue for me. It is a Heaven or Hell decision. For me it is a decision of obedience. I have no animosity toward anyone and harbor no ill will."

Acknowledging that there are "obviously strong feelings on both sides of this issue," Beshear says, "the United States Supreme Court has spoken and same-sex marriage is now legal in Kentucky and the rest of the United States."

But he adds that Kentucky's Legislature "has placed the authority to issue marriage licenses squarely on county clerks by statute," leaving the governor's office with no power in the matter.

After the Supreme Court ruled this summer that same-sex couples have the right to marry, Davis repeatedly filed for a stay that would allow her to refuse marriage licenses to such couples. But with each filing, she was turned away by federal district and appeals courts — including, on Monday, by the Supreme Court.

"The future of the Rowan County clerk is now in the hands of the courts," Beshear said Tuesday. Explaining his decision not to call a special session, the governor added:

"The General Assembly will convene in four months and can make any statutory changes it deems necessary at that time. I see no need to spend hundreds of thousands of dollars of taxpayers' money calling a special session of the General Assembly when 117 of 120 county clerks are doing their jobs."