Accessibility links
Federal Ferguson Review Finds More Than 100 Lessons For Police : The Two-Way An assessment of police response to the demonstrations there calls into question strategies like the overwatch tactic, with officers using rifle sights to survey the crowd from atop tactical vehicles. 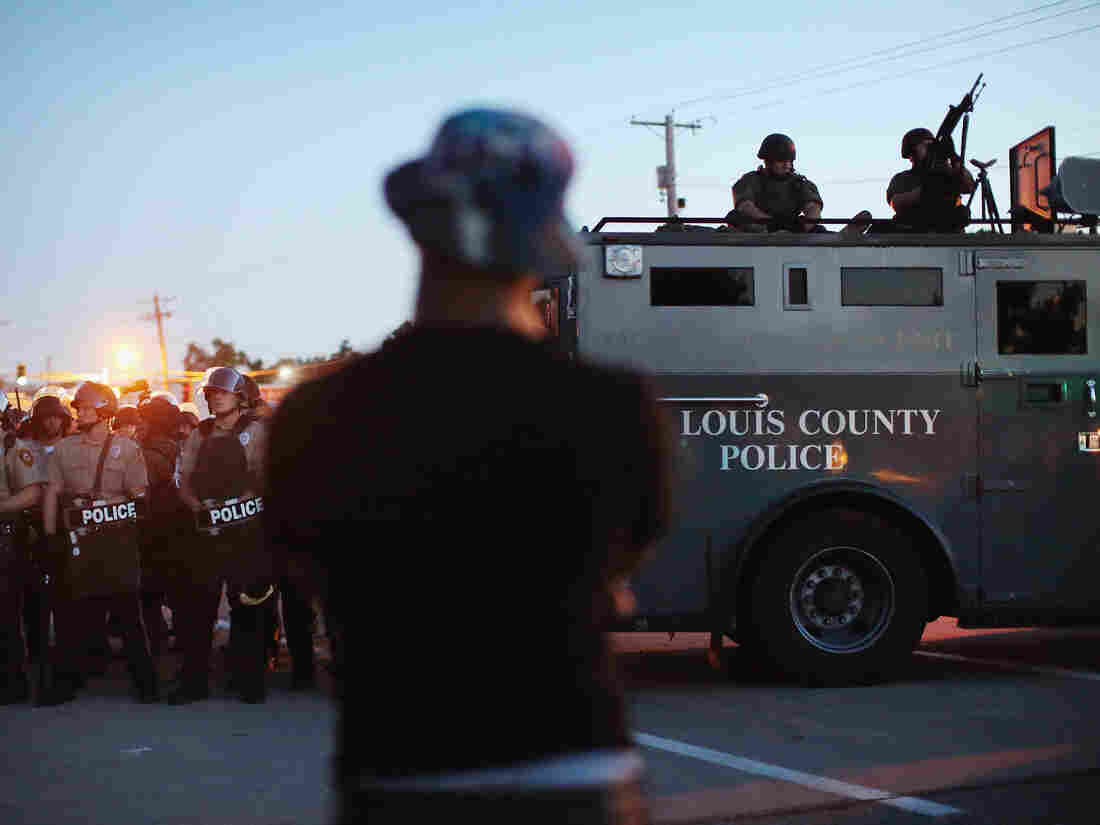 A new Justice Department report gave a total of 113 lessons learned and a half-dozen themes that "permeated all aspects of the police response" during the height of the demonstrations in Ferguson, Mo., last year. Scott Olson/Getty Images hide caption 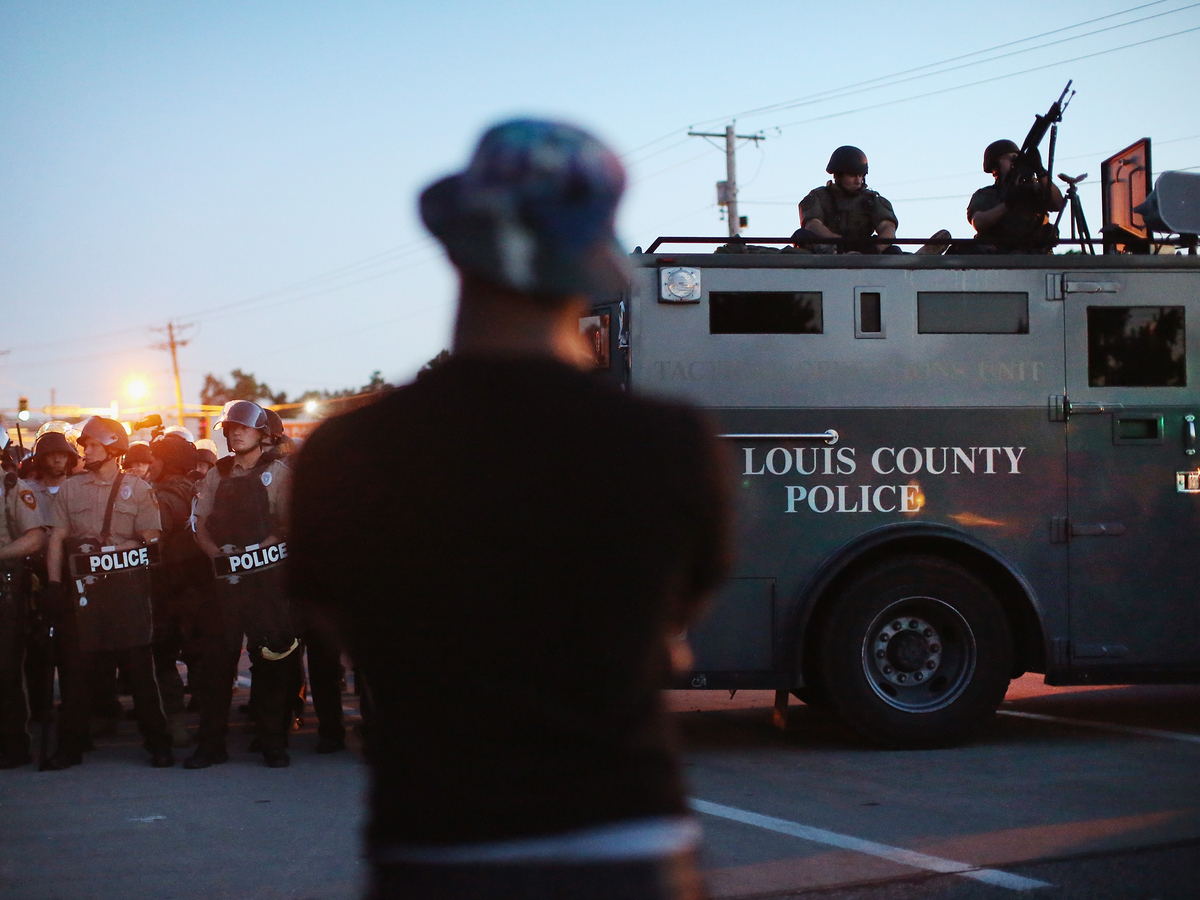 A new Justice Department report gave a total of 113 lessons learned and a half-dozen themes that "permeated all aspects of the police response" during the height of the demonstrations in Ferguson, Mo., last year.

The Obama administration Wednesday issued an after-action assessment of the police response to the demonstrations in Ferguson, Mo., that erupted last year following the killing of Michael Brown, an 18-year-old black resident of the city, by Darren Wilson, a white police officer.

The report, conducted by the Justice Department's Community Oriented Policing Services office, focused on the 17-day time frame between Brown's death and his funeral. The assessment does not provide a lot of new information, but it does provide greater insight into how policing tactics and strategy unfolded during that time when the atmosphere between law enforcement and demonstrators was especially tense.

There were a total of 113 lessons and a half-dozen themes that "permeated all aspects of the police response," according to the report. Some of those included inconsistent leadership, lack of understanding of community concerns with law enforcement and use of "ineffective and inappropriate" tactics that escalated instead of diminishing tensions.

The report made clear it was not casting fault with a particular law enforcement department.

"The purpose of this assessment was to objectively catalogue observations and findings, not place blame or levy accusations against the agencies assessed and their personnel." 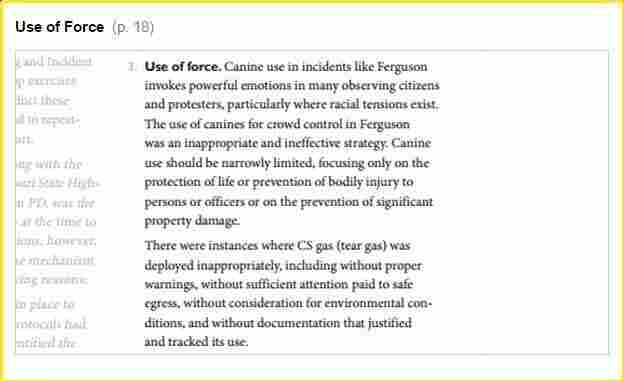 Investigators found that more than 50 different law enforcement agencies were involved at the height of the response. This led to confusion, questions of which agency was in charge and some "inconsistency of policy applications."

The report found both the St. Louis County and Ferguson police departments used canine units for crowd control at the homicide location on Aug. 9, the day Brown was killed, inappropriately. The canines were used within "accepted policing practices" for tracking suspects on three other occasions.

Militarization tactics during the demonstrations were also called into question by the report, specifically one known as the overwatch tactic, in which officers used rifle sights to survey the crowd from positions atop tactical vehicles. 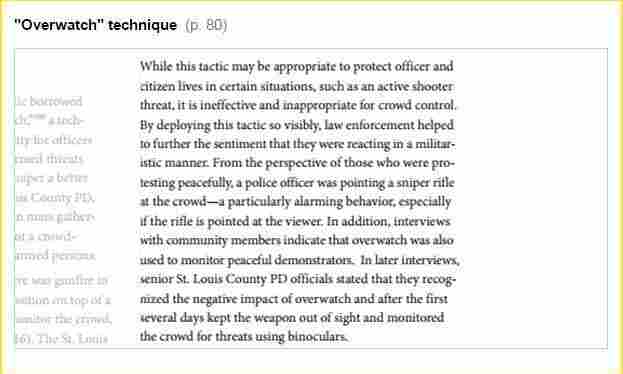 "While this tactic may be appropriate to protect officer and citizen lives in certain situations, such as an active shooter threat, it is ineffective and inappropriate for crowd control." NPR hide caption

Another area of concern detailed in the COPS assessment was the "keep moving" order — law enforcement would not allow demonstrators to remain in one place. Investigators determined this was a violation of citizens' rights to assembly and free speech.

The report also acknowledged law enforcement was under tremendous pressure, fatigue and stress during the demonstrations. Investigators noted officers on the front lines of crowd control were unprepared for the severity of threats to them and their families.

Also acknowledged were poor media relations, which got off to a slow start. The report found that in the early days of the demonstrations, "information was not forthcoming." Soon a local shooting became a national story that was a mix of racial injustice for African-Americans, police use of force, and violations of journalists' First Amendment rights.

Ronald Davis, director of the COPS Office at the Justice Department, applauded the local agencies included in the report for subjecting themselves to a thorough examination. 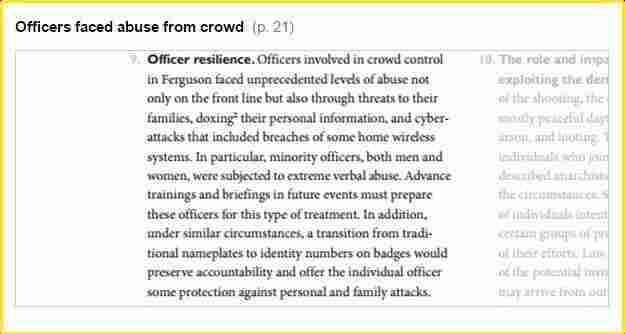 "Officers involved in crowd control in Ferguson faced unprecedented levels of abuse not only on the front line but also through threats to their families, doxing their personal information, and cyber-attacks that included breaches of some home wireless systems." NPR hide caption

"It takes a strong commitment to public safety and a genuine desire to make improvements for leaders to expose their agencies to such a review, especially knowing that the outcome may highlight challenges and areas of concern and expose the agencies to increased scrutiny and criticism.

"Yet we know that only through this type of self-reflection can the profession improve the services we provide to our communities. The failure to learn from our experiences — both our successes and setbacks — increases the likelihood of repeating mistakes and contributes to loss of public trust. In asking for this review, these leaders recognized that the truth often hurts, but selective ignorance is fatal to an organization."