Accessibility links
Kentucky Clerk Found In Contempt For Refusing To Issue Marriage Licenses : The Two-Way Kim Davis, the Rowan County clerk, has been defying court orders by refusing to hand out marriage licenses in protest of same-sex marriage. A judge ordered her taken into custody. 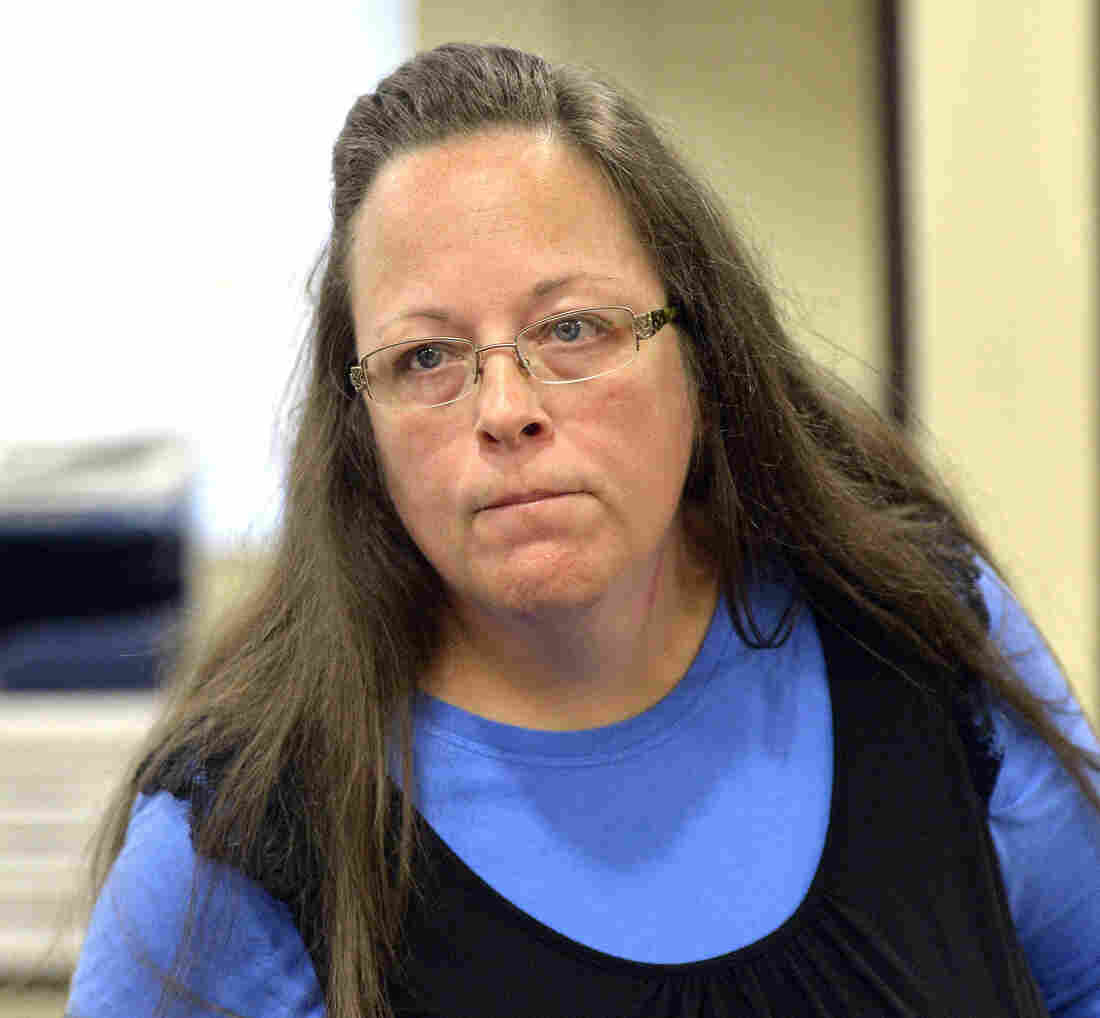 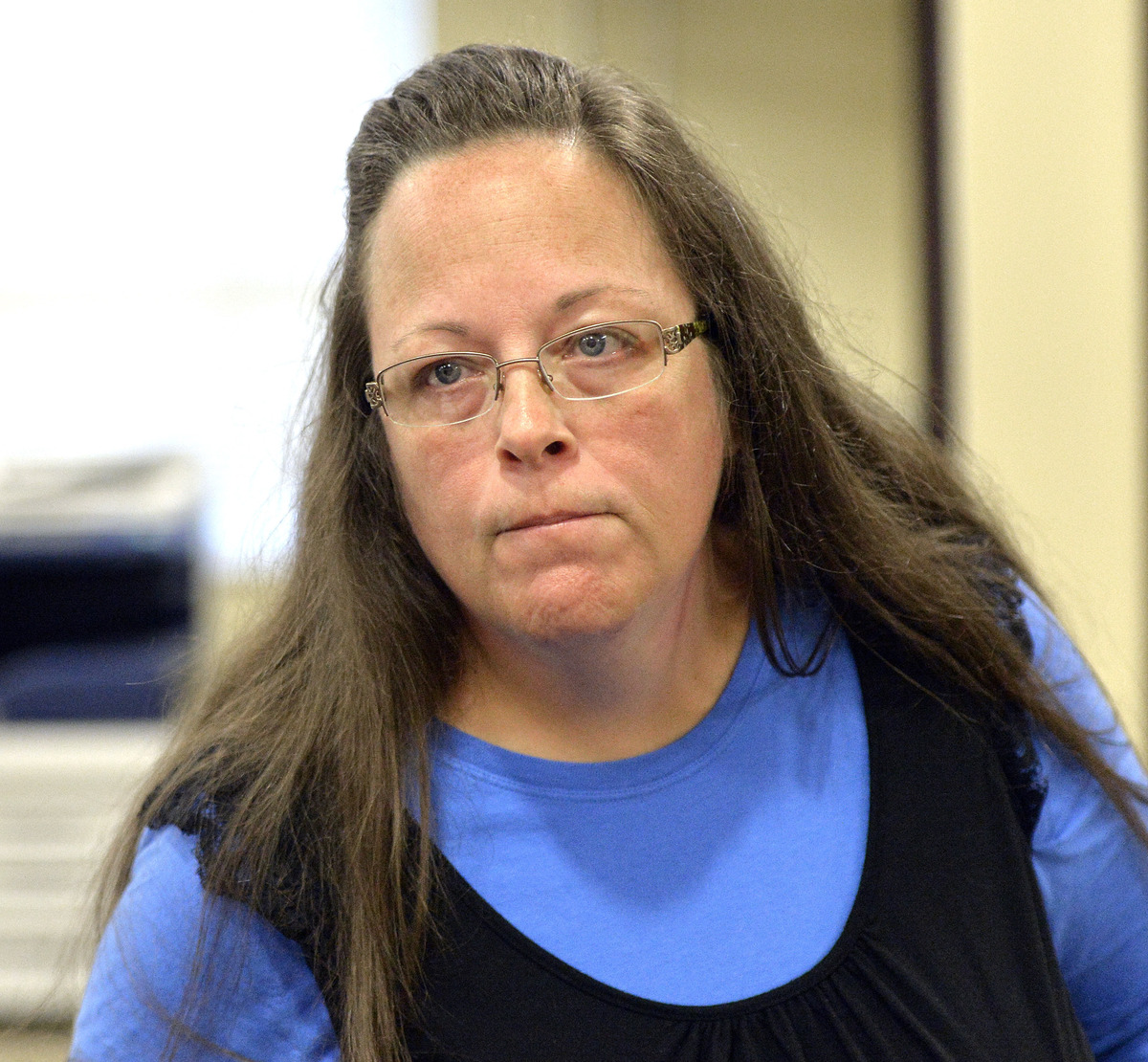 Rowan County Clerk Kim Davis listens to a customer following her refusal to issue marriage licenses at the Rowan County Courthouse on Tuesday.

A federal judge found a Kentucky clerk at the center of the national debate over same-sex marriage in contempt of court after she defied the Supreme Court by refusing to issue marriage licenses in protest of such marriages.

Davis, the Rowan County clerk, has become the most prominent elected official to refuse to abide by a Supreme Court decision that made same-sex marriage legal across the United States.

The plaintiffs in the case had asked the judge to fine Davis until she complied, but Barton reports that "the judge said that he wasn't convinced fines would have compelled" Davis to issue licenses.

As we've reported, a lower court had ordered Davis to issue marriage licenses, despite her religious objections. She appealed and then went all the way up to the U.S. Supreme Court to ask that the lower court's decision be put aside while she waited for the U.S. Court of Appeals for the 6th Circuit to issue an opinion on the matter.

In a motion filed with the court Wednesday, her lawyers argued that it is presently "impossible" for Davis to comply with the court order because it "irreparably and irreversibly violates her conscience by directing her to authorize and issue SSM licenses bearing her name and approval."

Legal scholars disagree with that assessment.

Here's how Katherine Franke, a law professor at Columbia University, where she heads the Public Rights/Private Conscience Project, explained it to NPR's Robert Siegel earlier this week:

FRANKE: She has absolutely no legal ground to stand on. As a public official, she's supposed to abide by the law and perform her public duties, which are issuing marriage licenses to qualified couples. Same-sex couples are now qualified to marry in the state of Kentucky, so she is refusing to do her job.

SIEGEL: But are there protections — even for public officials — for some religious convictions that might, in some ways, conflict with someone else's performance of the same job?

FRANKE: Of course. Kim Davis has all sorts of religious liberty rights secured under the First Amendment and under other laws. But they are not at stake in this case. All she's asked to do with couples that come before her is certify that they've met the state requirements for marriage. So her religious opposition to same-sex marriage is absolutely irrelevant in this context.

It's worth noting that in an amicus brief filed Wednesday, Kentucky Senate President Robert Stivers asked the court to "temper its response."

The laws of the state, argues Stivers, have not yet caught up with the Supreme Court decision that made same-sex marriage legal across the whole United States.

In fact, Stivers argues, state law currently contains penalties for performing prohibited marriages — such as those between people who are "nearer of kin ... than second cousins" — but does not contain penalties for refusing to issue licenses to those who are permitted to marry.

So, Stivers argues, the court should slow down and let the Legislature sort this out before holding Davis in contempt.

As we reported Wednesday, because Davis is an elected official she cannot be fired from her job. Instead, she would have to be impeached by the state's House of Representatives and tried by the state's Senate.

Barton reports that she could be held in custody until she changes her mind or until her term ends four years from now.

Barton tells our Newscast unit that the judge decided to put her in custody after the plaintiffs questioned Davis on whether she had received offers of financial support.

If there was the potential of an "endless supply of money for her to pay her fines," she would have no incentive to comply with the court order, the judge decided.

The hearing at the federal court in Ashland, Ky., was scheduled to begin at 11 a.m. ET. There are no cameras allowed inside the courthouse and reporters are not being allowed to send dispatches.

That means we'll have to wait for an update until after the hearing is over. We'll update this post as soon as we receive word.

Kentucky Public Radio's Ryland Barton is tweeting from the scene.