Accessibility links
Woolly Mammoth: Shearer Saves Hugely Overgrown Sheep : The Two-Way A sheep found in the wild in Australia had to undergo emergency shearing — 89 pounds, 3 ounces of wool was cut away. The sheep's weight reportedly dropped by half. 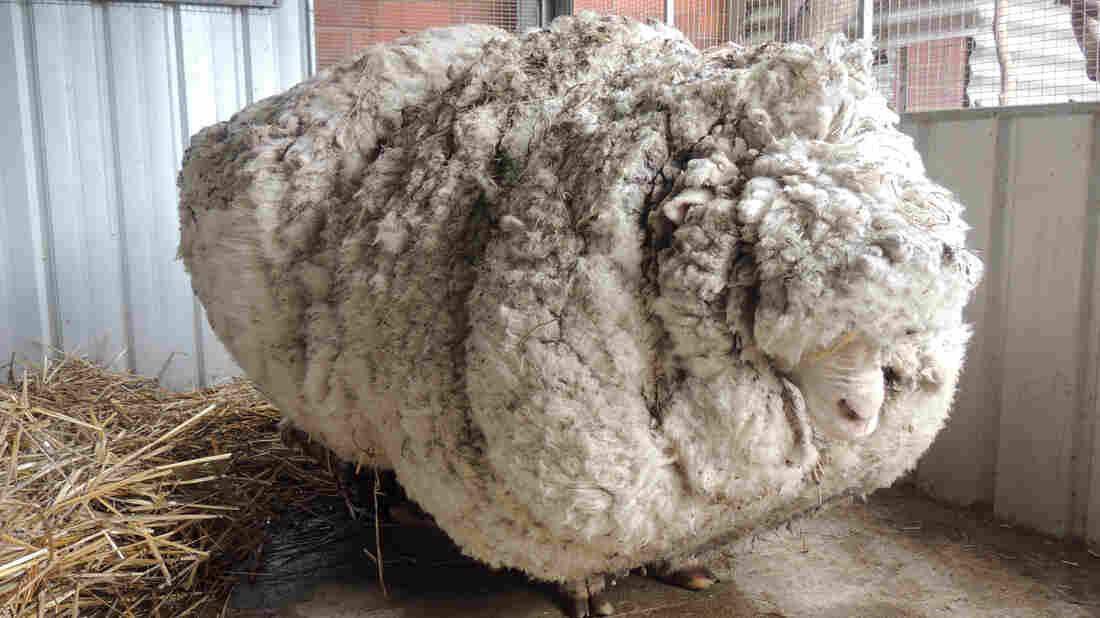 BEFORE: In this photo provided by the RSPCA/Australian Capital Territory, Chris the sheep is prepared to be shorn in Canberra. HONS/AP hide caption 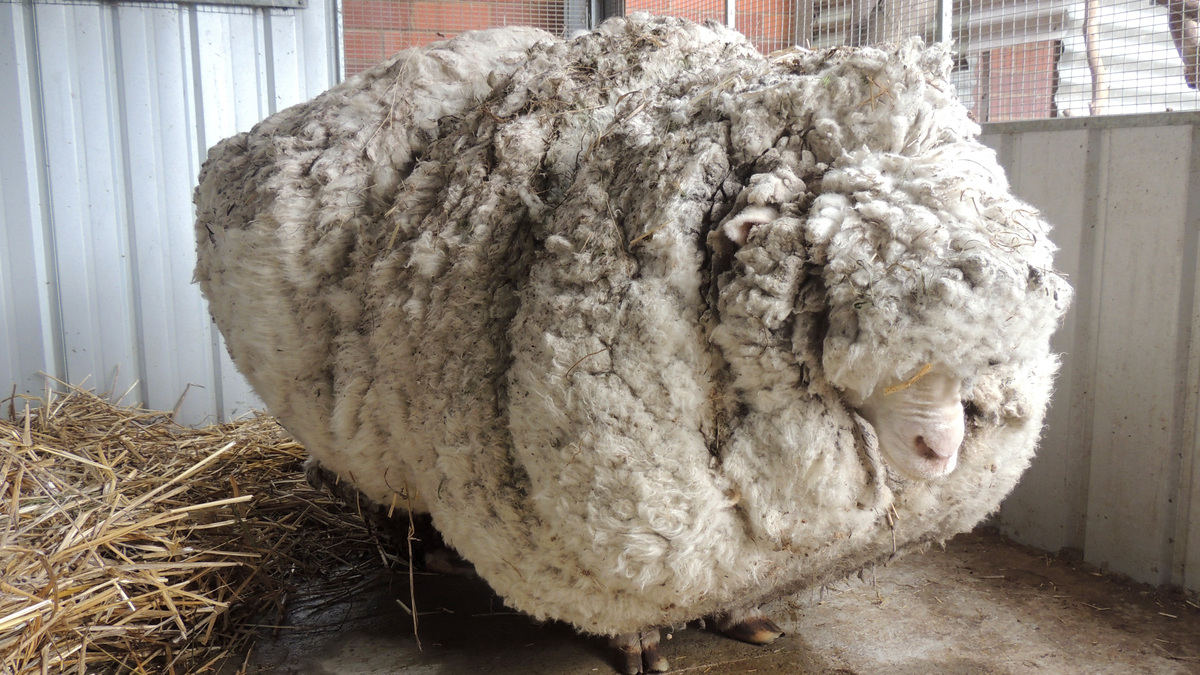 BEFORE: In this photo provided by the RSPCA/Australian Capital Territory, Chris the sheep is prepared to be shorn in Canberra.

Among the kangaroos and kookaburras, another creature trundled through the Australian bush.

Hooves barely visible, eyes mostly covered, the animal was the size of a refrigerator, the color of dirty snow. 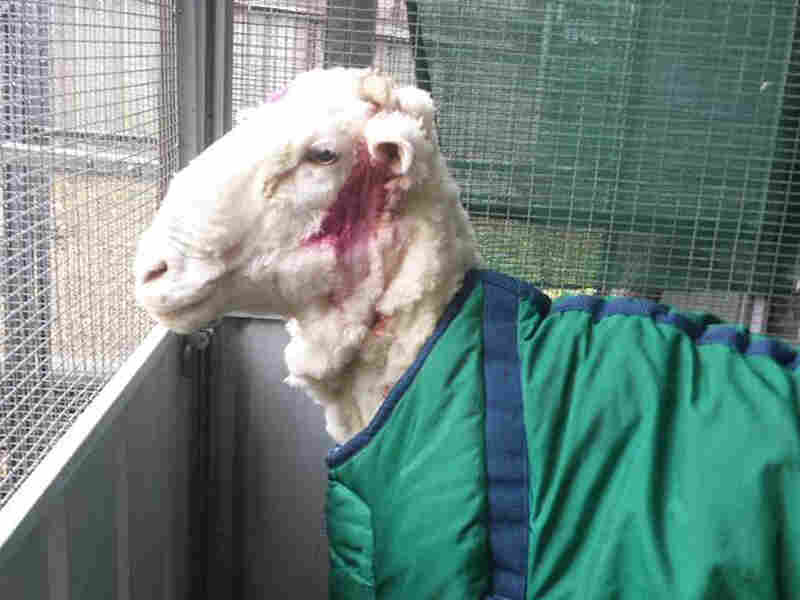 AFTER: Chris the sheep stands in a pen after he was shorn for perhaps the first time in his life. He's clean and a little colorful thanks to the pink antibacterial ointment. HONS/AP hide caption 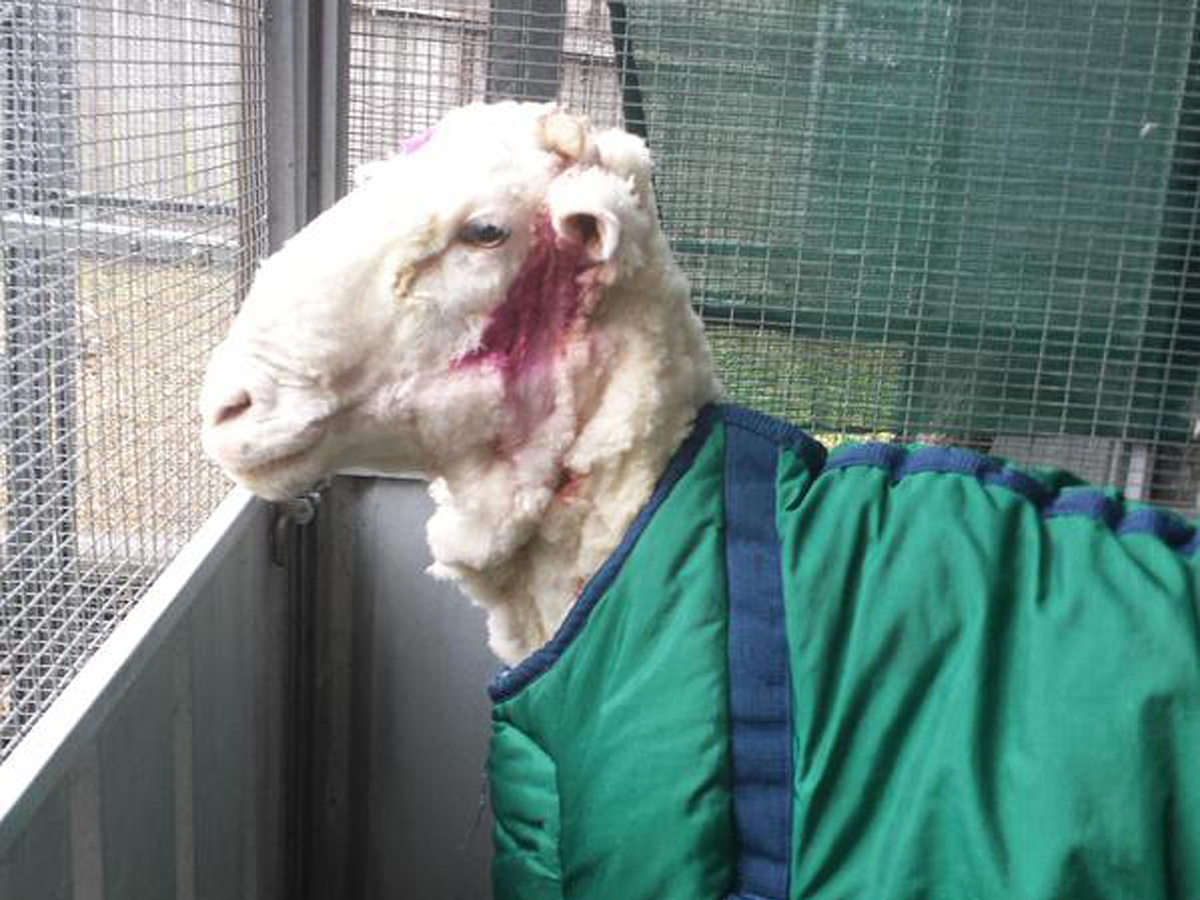 AFTER: Chris the sheep stands in a pen after he was shorn for perhaps the first time in his life. He's clean and a little colorful thanks to the pink antibacterial ointment.

A concerned hiker spotted the furry specimen days ago and raised the alarm. It was a matter of life and death — and this sheep needed a haircut.

News reports say the merino sheep had likely wandered from his flock five or six years ago and had been on the lam(b) in the wild ever since. While merinos are typically sheared every spring, rescuers think the sheep, named Chris, probably had never been shorn. His wool had grown to about four to five times the normal amount of wool for a merino sheep, resulting in some serious health problems.

Besides being partially blinded by the wool flopping into his eyes, his hooves were damaged from carrying the weight of all that extra wool. He also had skin burns from urine trapped in his fleece. Plus, had Chris fallen down, his mass of wool would have made it difficult to get back up, rendering him easy prey for dingoes or other predators.

The Associated Press quotes the head of a group that helped rescue the sheep as saying it could have died within weeks if left in the wild.

Death was not his fate, however, thanks to a conscientious hiker who alerted the Royal Society for the Prevention of Cruelty to Animals, which swooped in to take over the woolly situation. Tammy Ven Dange, CEO of the Canberra RSPCA, immediately sent out a distress signal soliciting shearing help.

Help! @rspcaact needs help from a sheerer immediately to hopefully save this sheep we just rescued! #Canberra #CBR pic.twitter.com/427j1ZN40E

After about 45 minutes and the administration of some sedatives (because the sheep was nervous around people after his time in the wild), Chris emerged, unrecognizable.

It must be one of the most dramatic makeovers ever. Elkins cut away 89 pounds, 3 ounces of wool, which if verified would shatter the previous world record of 63 pounds, 11 ounces shorn from a wild New Zealand merino in 2011. Chris' weight reportedly dropped by half.

"It's very exciting to be part of it," Elkins told The Guardian. "And it's quite pleasing that the welfare of this sheep was taken care of."

Wondering why the sheep was named Chris? According to the AP, the hiker chose the name after the sheep in the sitcom Father Ted.