Accessibility links
Austria, Germany Agree To Take Migrants Stopped In Hungary : The Two-Way Groups of the refugees earlier had left a rail station and stopped train and begun walking toward Austria. Also: The father of a 3-year-old Syrian boy who drowned in the Aegean Sea buries his family. 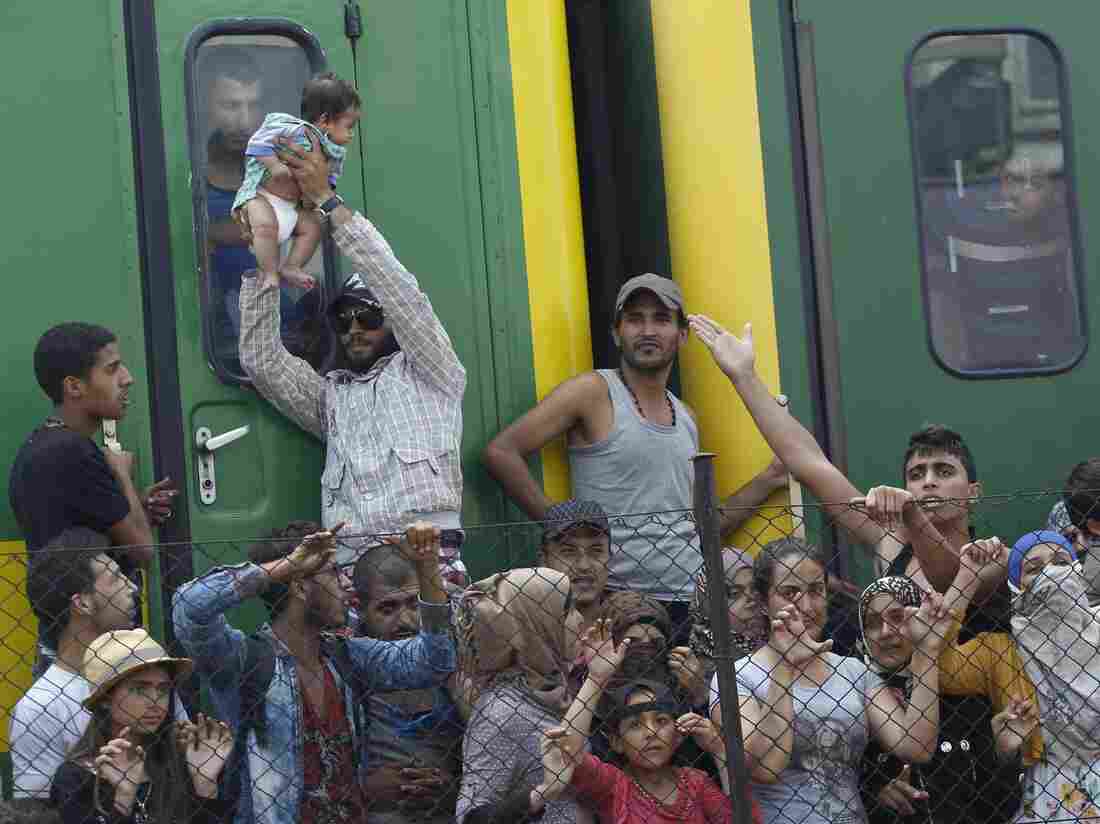 A man lifts up a child next to a train that was stopped in Bicske, Hungary, on Friday. More than 150,000 people have reached Hungary this year, most coming through the southern border with Serbia. Petr David Josek/AP hide caption 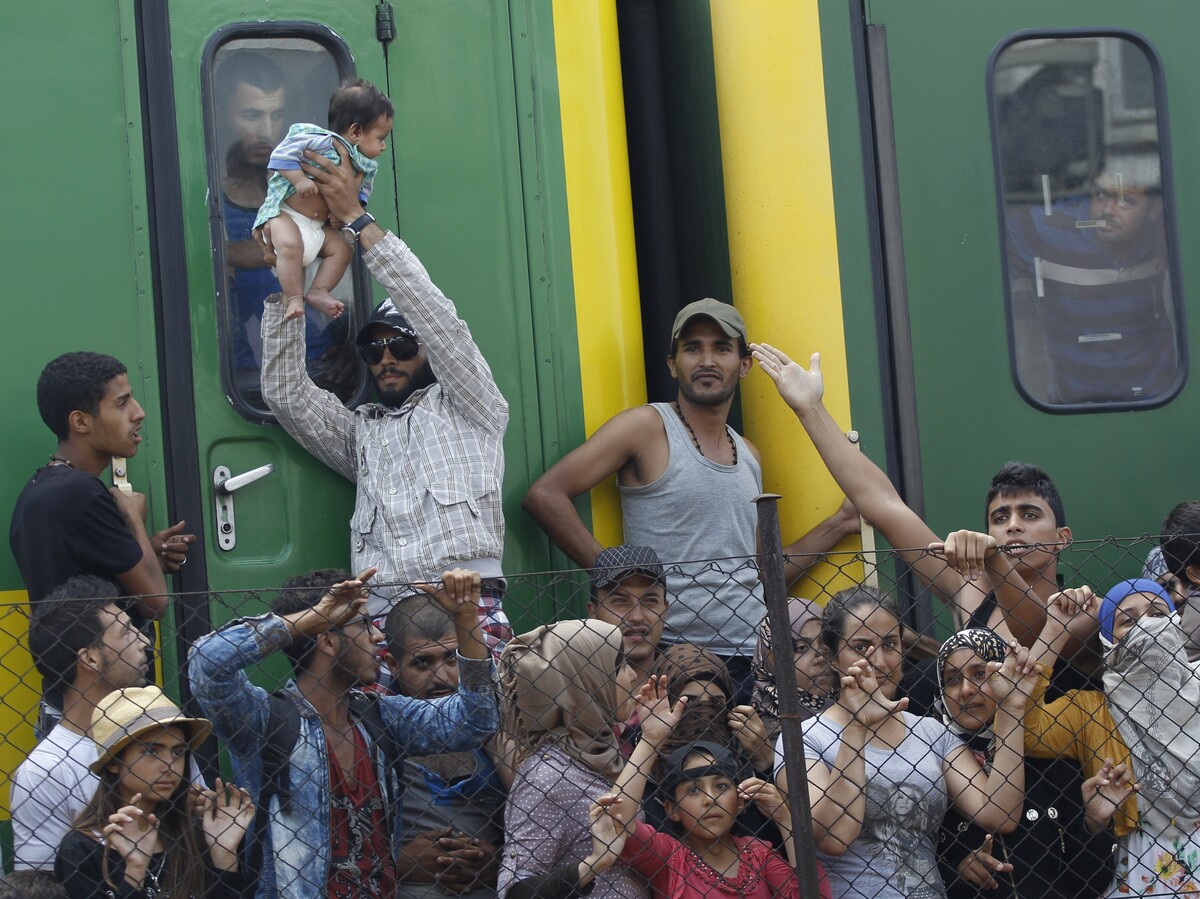 A man lifts up a child next to a train that was stopped in Bicske, Hungary, on Friday. More than 150,000 people have reached Hungary this year, most coming through the southern border with Serbia.

The refugees, some of whom had walked for hours in the direction of Austria after leaving a Budapest rail station, were provided buses by the government of Hungary late Friday after authorities in Austria and Germany agreed to accept them, the Associated Press reports.

Some of the migrants already had walked 30 miles, about a third of the way to the border, by the time of the agreement, the AP reports. 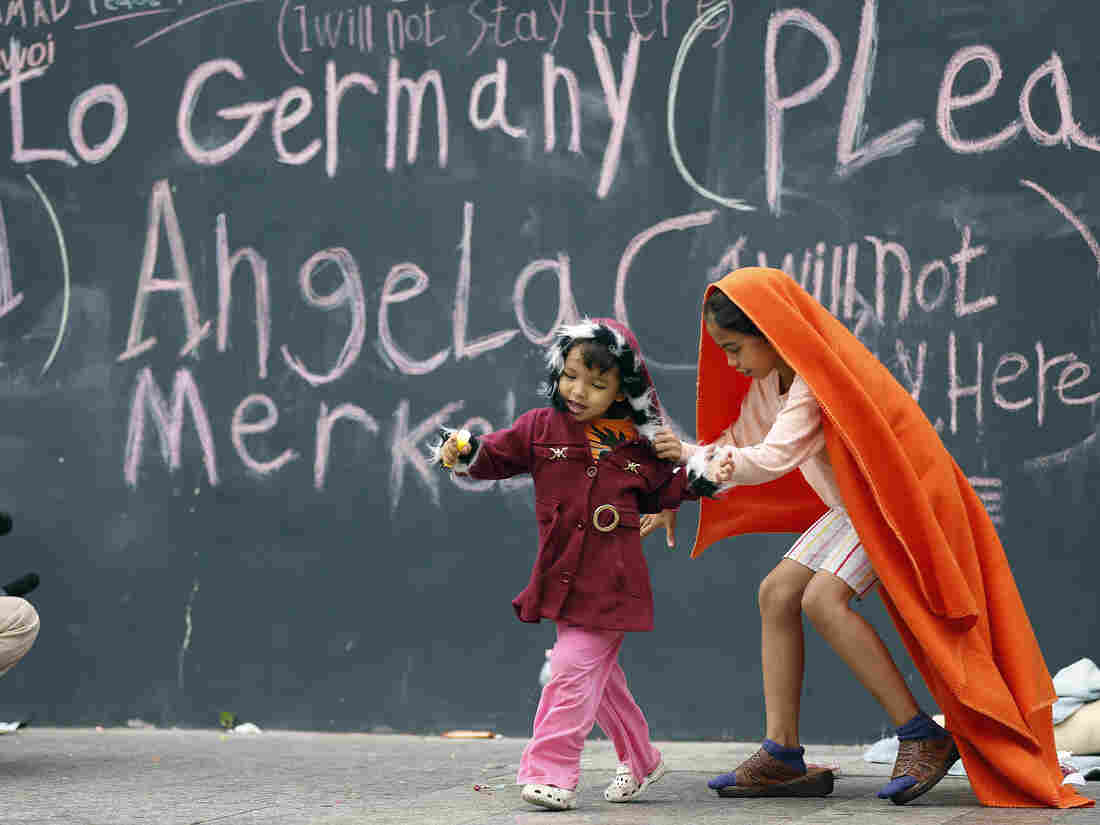 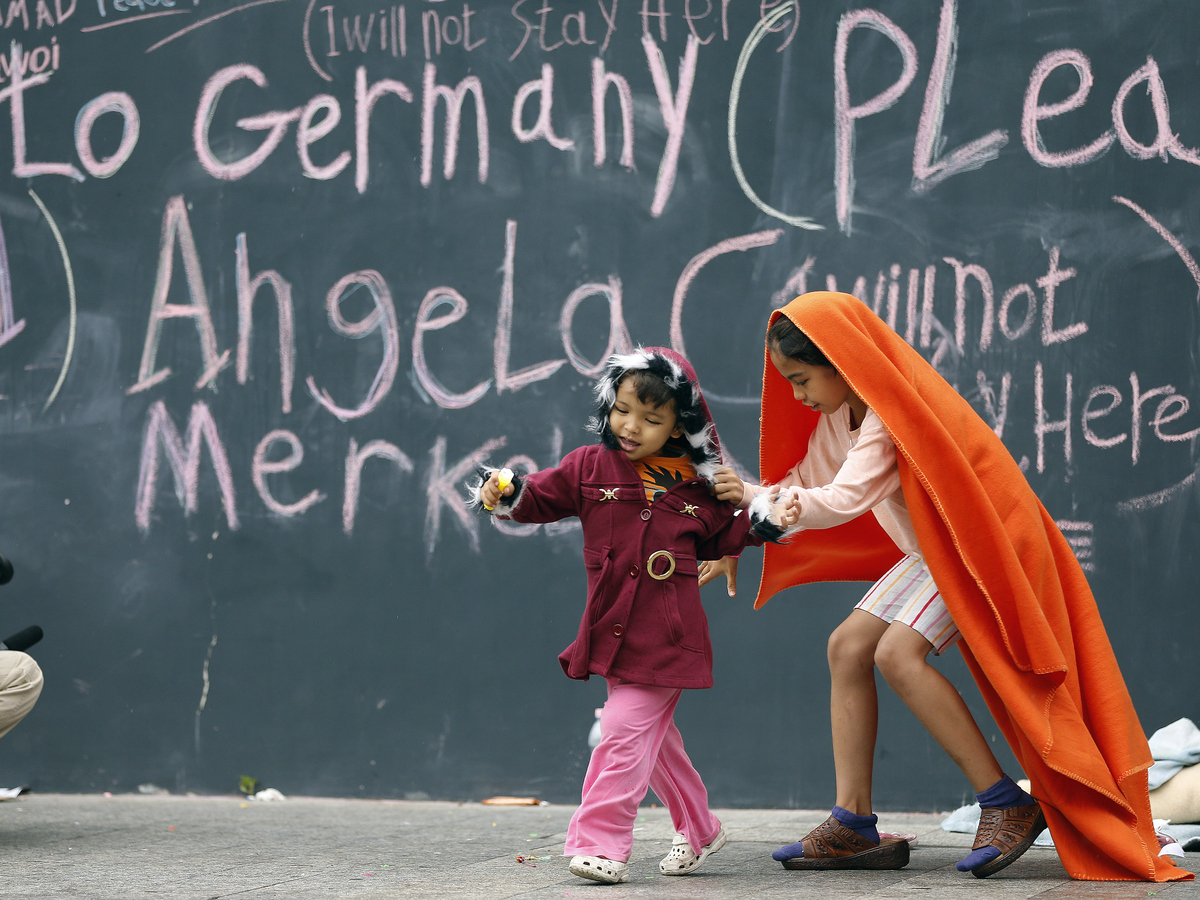 Migrant children play at Keleti railway station in Budapest, Hungary, on Friday. Many of their families hope to reach Germany and gain political asylum. 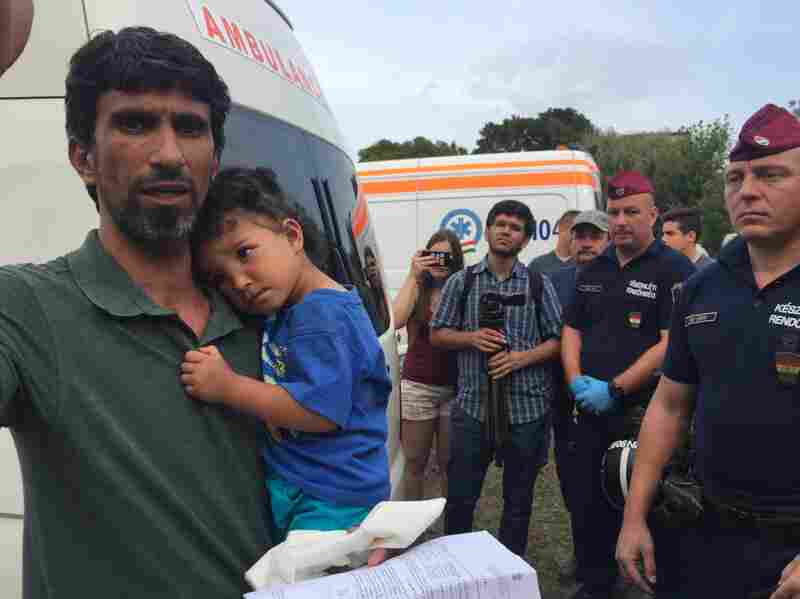 Here are the latest developments in the migrant crisis in Europe:

-- Hundreds of refugees have set off from the Budapest railway station in Hungary and are vowing to walk to Germany after officials refused to allow them to board trains.

The Telegraph says the exodus took place "alongside commuter traffic, with a wailing escort of police, and a helicopter overhead."

Meanwhile, some 2,300 migrants in a Hungarian refugee camp near the Serbian border are threatening also to break out, according to police. The news agency says that about 300 migrants have already escaped the camp near the town of Roszke, and police have called in a riot unit to secure the compound.

Eleanor Beardsley, reporting for NPR's Morning Edition from Hungary, says: "At one point a desperate man got off the train holding his tiny daughter in his arms. A Hungarian health care worker checked her swollen eyes. Abdel Mounan, who's from Iraq, says his daughter was afflicted with whatever she has after two days in a Hungarian refugee camp. And he'd rather die than go back."

-- The United Nations says the European Union must accept 200,000 refugees as part of a "common strategy" to replace its country-by-country response to the sudden surge of refugees from Syria, North Africa, Afghanistan, Iraq and Bangladesh — most of whom are trying to reach Germany.

-- British Prime Minister David Cameron, who earlier had said that simply accepting more refugees was not the solution to the migrant crisis, has said the U.K. will resettle "thousands" more Syrians fleeing the fighting in their homeland. He said Britain would act with "head and heart," but he did not give an exact figure for how many refugees would be resettled.

-- Serbia has said that it is ready to discuss accepting a quota of refugees for settlement as per a tentative EU plan among the bloc's 28 members.

"This is a defining moment for the EU, and it now has no other choice but to mobilize full force around this crisis," U.N. High Commissioner for Refugees Antonio Guterres said. "The only way to solve this problem is for the union and all member states to implement a common strategy, based on responsibility, solidarity and trust."

-- Abdullah Kurdi — the father of a 3-year-old Syrian boy whose body washed up on a Turkish beach, focusing the world's attention on the crisis — has reached his hometown of Kobane in Syria, where he buried his family. The toddler will be buried along with his 5-year-old brother and their mother, all of whom drowned in the Aegean Sea as they tried to flee Syria. More here.

-- Turkish President Tayyip Erdogan says the EU shares "the sin of every refugee who loses their life" trying to escape the Middle East for Europe.

-- Joanna Kakissis, reporting for NPR, says Hungarian Prime Minister Viktor Orban "has claimed that the refugees, many of them Muslims from Syria, will change the Christian character of Europe. He says he wants to police the EU's borders. He says the refugees can only travel to Germany if they receive German visas."

-- Police in Austria say 71 refugees found dead in a truck last week along a major highway include Syrians, Iraqis and Afghans who "probably suffocated."

-- German police are investigating a fire at a home for asylum-seekers in Hesse that injured five people, one of them seriously. Officials say it's too early to say whether the cause was arson.