Accessibility links
Attorneys For Kim Davis: Marriage Licenses Issued Friday Are 'Void' : The Two-Way After spending the night in jail, Rowan County Clerk Kim Davis tells her lawyers, "All is well," adding that she slept well. She also says she is prepared to stay in jail. 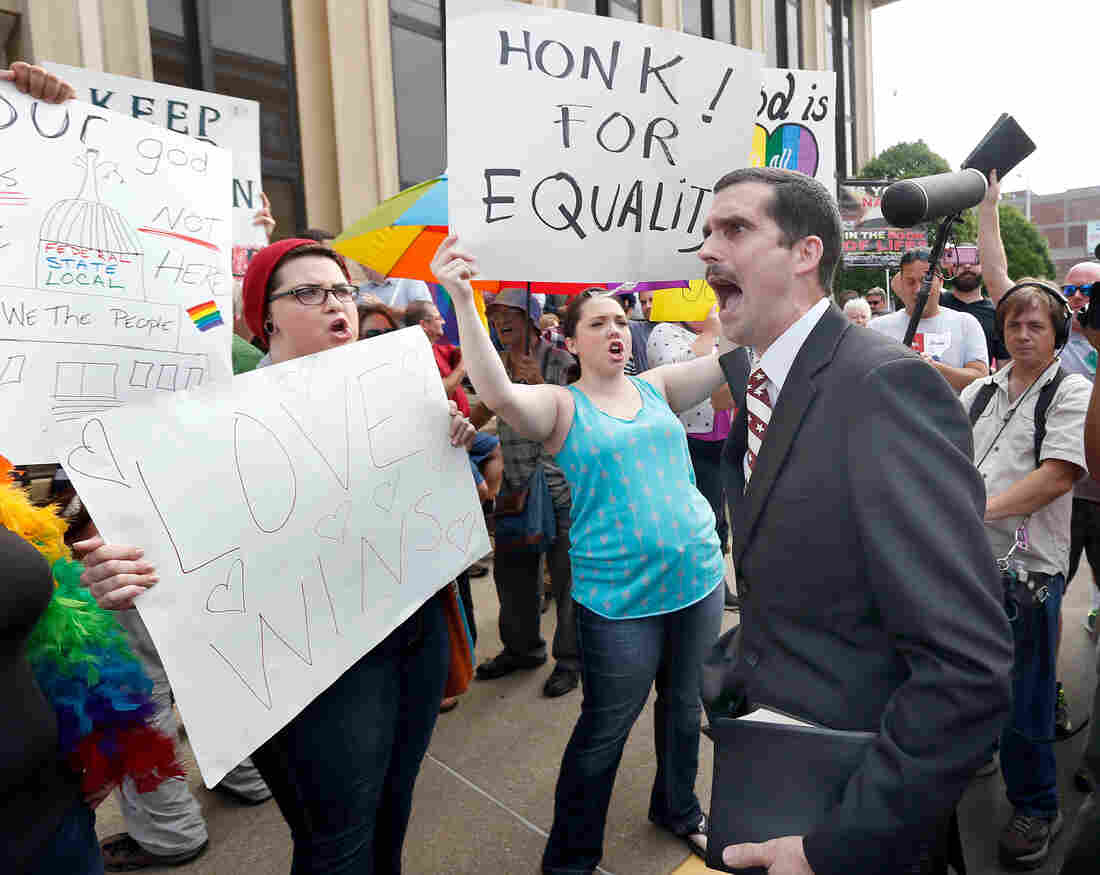 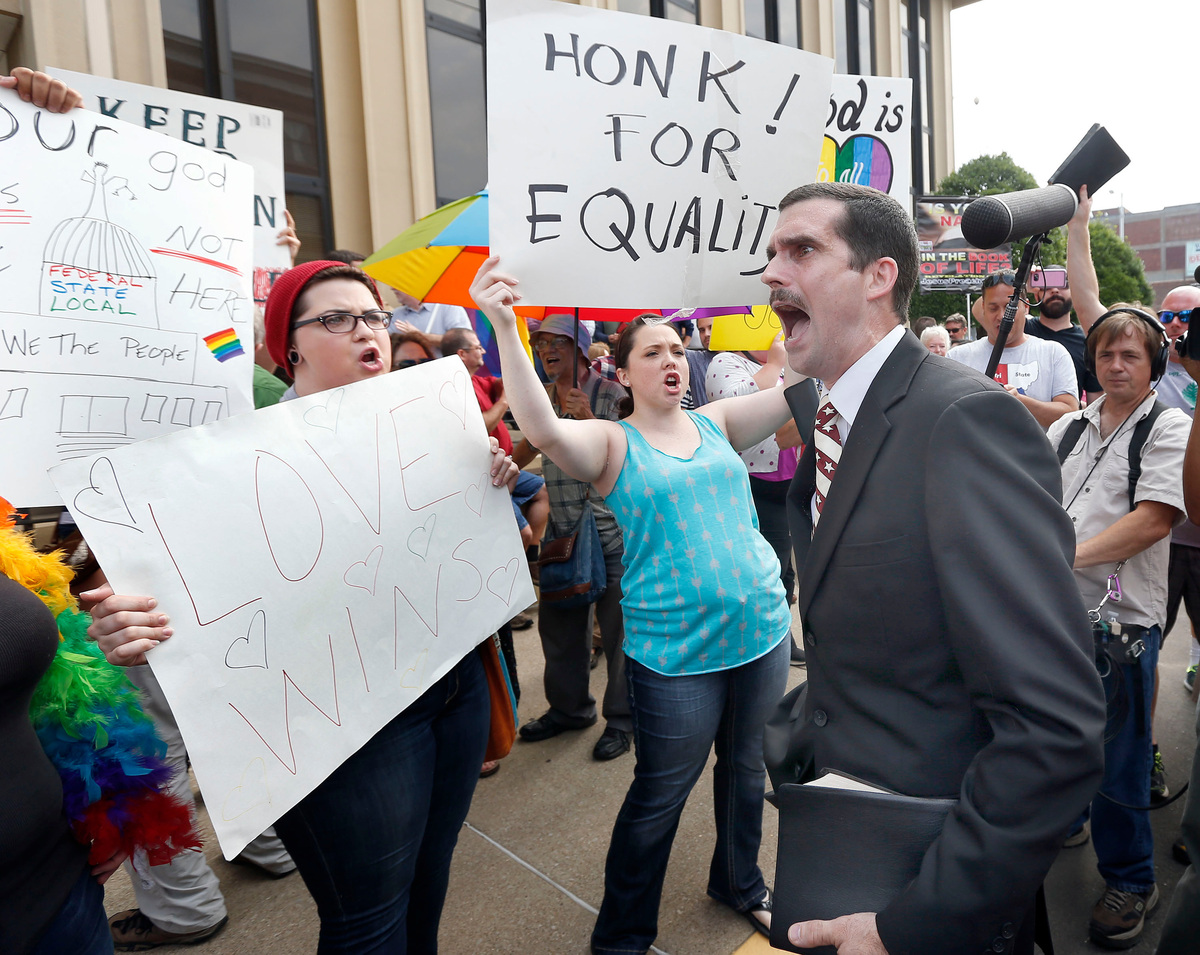 After spending the night in jail, Rowan County Clerk Kim Davis tells her lawyers, "All is well," adding that she slept well. She also says she is prepared to stay in jail. And her legal team says the marriage licenses that were issued by the clerk's office today are invalid.

"She has a clean conscience, even though she's incarcerated behind these bars," attorney Mat Staver said Friday afternoon.

Davis was found in contempt of court and jailed Thursday; since then, several same-sex couples have received marriage licenses from her office. As Eyder reported Friday morning, those who can now marry include James Yates and William Smith, who had sought a license five times.

As for Davis' future, Staver said, "she will remain the clerk of Rowan County as long as the people" want her to.

The attorney also reiterated that Davis "cannot affix her name or her title, under her authority, to a marriage license. ... That is for Kim Davis a heaven or hell decision."

In her absence, deputy clerks in the Rowan County clerk's office have been issuing marriage licenses in a businesslike manner, Eyder says, a marked contrast to the celebrations, rallies and protests that have been going on outside this week.

After Yates and Smith submitted their paperwork and $35, they received the first license that was given out Friday, along with a simple "Congratulations" from Deputy Clerk Brian Mason.

But discussing that and other marriage licenses issued to same-sex couples today, Staver said they are "void," because they did not come under Davis' authority.

"They are not worth the paper that they are written on," Staver said.

Exploring that idea, he said the county clerk has the authority to distribute marriage licenses — and Davis hasn't ceded that authority to her deputies who issued licenses Friday.

Staver is the founder of the Liberty Counsel, which identifies itself as a nonprofit group advocating "religious freedom, the sanctity of life, and the family."

As for U.S. District Judge David Bunning's decision to jail Davis, Staver called Thursday's hearing "a charade," saying that the judge had already set arrangements in motion to put Davis in jail before the hearing had begun.

The jailed clerk's attorneys spoke to journalists Friday, after meeting with Davis at the Carter County Detention Center in Grayson, Ky.

Staver spoke of the strangeness of seeing an elected official wearing prison orange. But he also said, "Kim Davis is content with wherever she is. She has no remorse."

A possible resolution to the conflict between Davis' religious beliefs and her public responsibility could be reached, Staver said, if a Kentucky statute were to be changed to have a central group approve and distribute marriage licenses, rather than forcing clerks to act against their beliefs. He added that either the governor or the Legislature could make that happen.

In that, Staver seemed to disagree with Gov. Steve Beshear, who has repeatedly said that he has no authority to intervene because the statute gives sole authority over marriage licenses to county clerks. Beshear said that the Legislature would have to take up the issue when it reconvenes in January.

Earlier Friday, the Liberty Counsel released a statement from Staver which reads in part:

"Last night Kim Davis was incarcerated in a jail cell while the rest of us slept in our comfortable beds. While it is not new that some people are imprisoned, it is stunning to realize Kim is there because of her faith in God and her convictions about marriage.

"Not long ago 75 percent of Kentuckians passed the state's marriage amendment. Today a Christian is imprisoned for believing what the voters affirmed: marriage is between a man and a woman. Five people on the Supreme Court imposed their will on 320 million Americans and unleashed a torrent of assaults against people of faith. Kim Davis is the first victim of this tragedy."