Accessibility links
New Bottleneck Of Migrants Forms In Hungary's Detention Centers : The Two-Way The president of the European Union is calling on countries to welcome their share of what the U.N. predicts will be at least 850,000 migrants over the next two years. 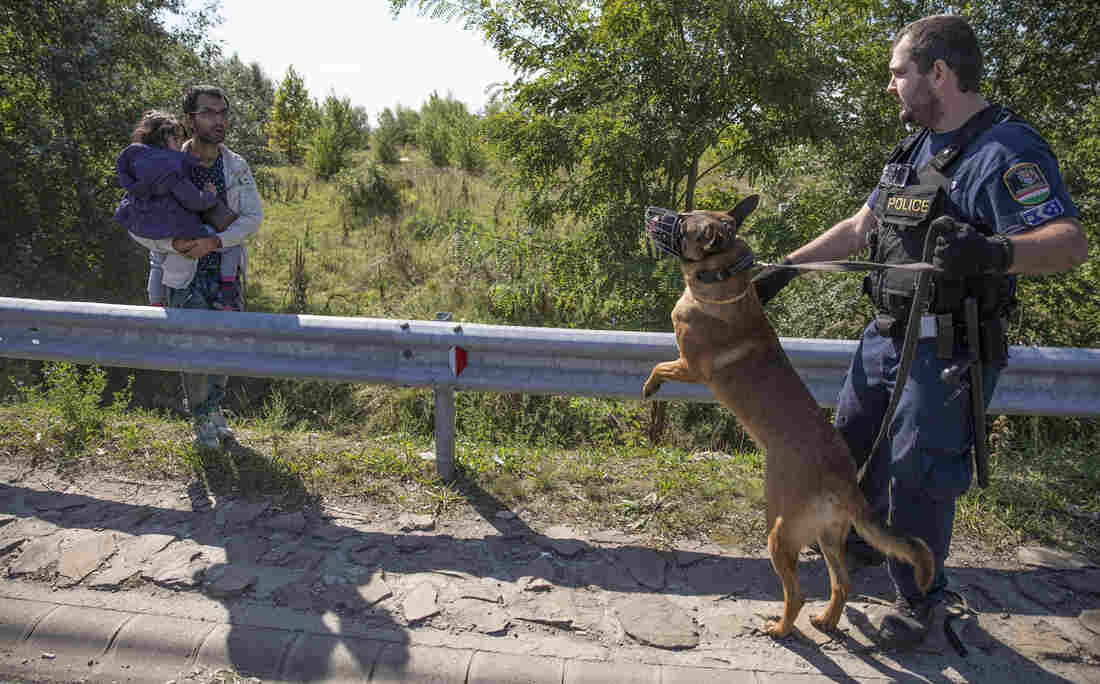 A man is confronted by a Hungarian police officer with a dog as he holds his daughter in an area where migrants ran over a motorway from a collection point set up to transport people to camps in Morahalom, Hungary, Wednesday. Dan Kitwood/Getty Images hide caption 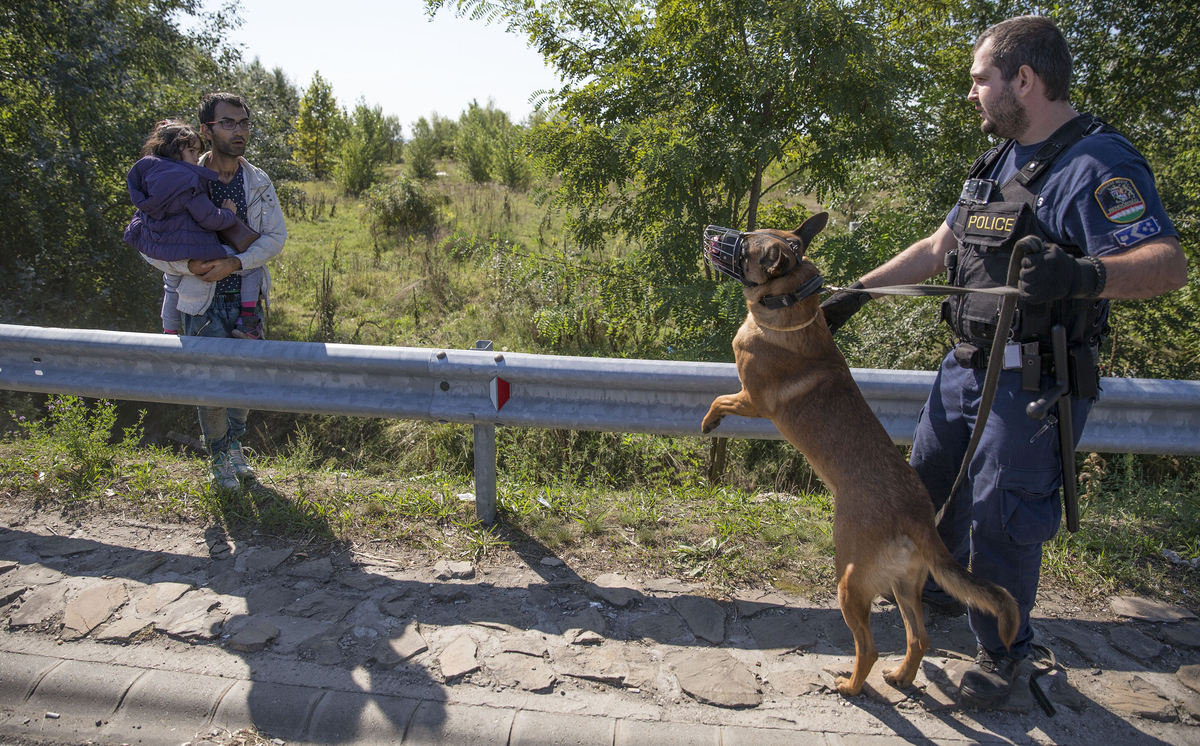 A man is confronted by a Hungarian police officer with a dog as he holds his daughter in an area where migrants ran over a motorway from a collection point set up to transport people to camps in Morahalom, Hungary, Wednesday.

Thousands of refugees and other migrants who are streaming into Hungary from Serbia are finding themselves detained near the border, frustrating their attempts to reach Germany.

The president of the European Union is calling on countries to welcome their share of what the U.N. predicts will be at least 850,000 migrants over the next two years.

"In 2015, UNHCR anticipates that approximately 400,000 new arrivals will seek international protection in Europe via the Mediterranean," the U.N. Refugee Agency says in an appeal for financial and other help. "In 2016 this number could reach 450,000 or more."

Hungary's policy of registering all new arrivals often means detaining migrants who have finally reached Europe after crossing the Mediterranean Sea, instead of allowing them to catch trains or buses to more substantial shelter elsewhere.

At least 2,700 people arrived from Serbia overnight from Monday to Tuesday, the U.N. Refugee Agency says. Hundreds of people managed to break through a police line and move on – but other migrants, some of whom have already been held for days, are frustrated. With a detention center full to bursting, they were left to camp outside.

"We must leave as soon as possible, simply because living here, without tents, without blankets, is too difficult," one man tells the agency.

Hungary is also holding migrants who reach its capital; the UN says 42,000 more migrants are heading to the country.

From Budapest, Lauren Frayer reports after visiting the border with Serbia:

"They just want to go — northward — to Germany. Instead, thousands of migrants and refugees have been locked up here in Hungary, as this country struggles to fingerprint and register them. They call out for help, from behind a barbed-wire fence.

" 'We want go! We leave here by our own money. Just let us leave the country. That's it. Please help us.'

"Asylum seekers are supposed to register in the first European Union country they enter. But Hungary's system is overcrowded and failing. Up to 1,000 people are sleeping in a corn field, surrounded by police. Sanitation is inadequate, and nights are cold."

Germany has led the way in receiving migrants, setting aside billions of dollars to cope with the influx of as many as 500,000 people annually.

On Wednesday, Australia boosted its pledge to receive refugees from Iraq and Syria, with Prime Minister Tony Abbott pledging to take in an additional 12,000 people – nearly double the country's current intake. And the U.S. is looking at accepting more migrants, as well.

In Europe, many migrants hope to cross borders to reach nations that have policies and/or reputations that are seen as welcoming. And some of the nations themselves are playing off those perceptions.

"Refugees are supposed to seek asylum in the first European country they come to. Those who've made it north through Germany without being registered are generally aiming for Sweden, a country with a particularly welcoming reputation, and the highest per capita number of refugees in Europe.

"Denmark, meanwhile, has recently tightened its rules in an effort to discourage would-be immigrants. Still, Swedish officials say they will not make a special deal with this country, meaning new arrivals must seek asylum in Denmark as required.

"As a result, more than 100 refugees have fled from Danish police in recent days. And many Danes have publicly admitted to helping drive — or even sail — some of them toward the Swedish border."

As those stories show, the European Union has not reached a consensus on how to cope with a migrant crisis that has seen more than 380,000 people reach its member nations so far in 2015.

"Juncker wants the 28 EU countries to share the resettlement burden for 160,000 migrants with binding quotas based on national factors such as GDP and size. And he wants them to agree quickly.

"EU funds could be withheld from countries that don't take in required numbers. Eastern European nations say they're opposed."