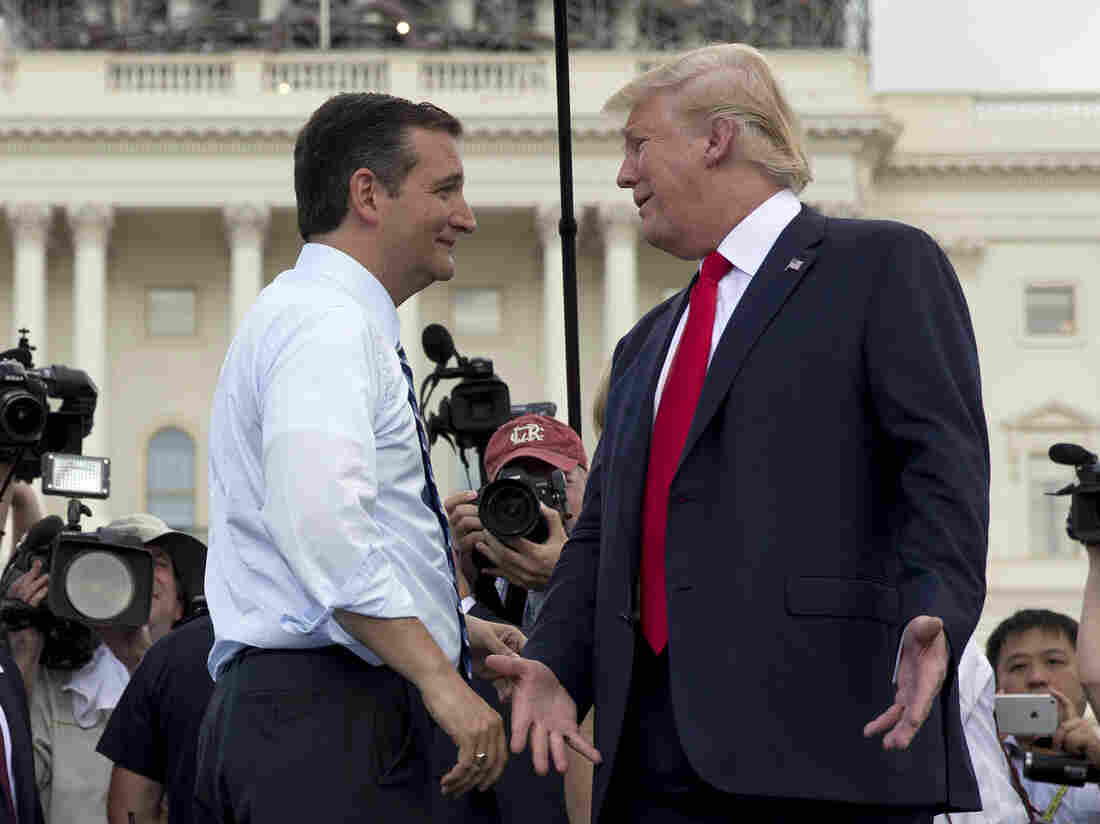 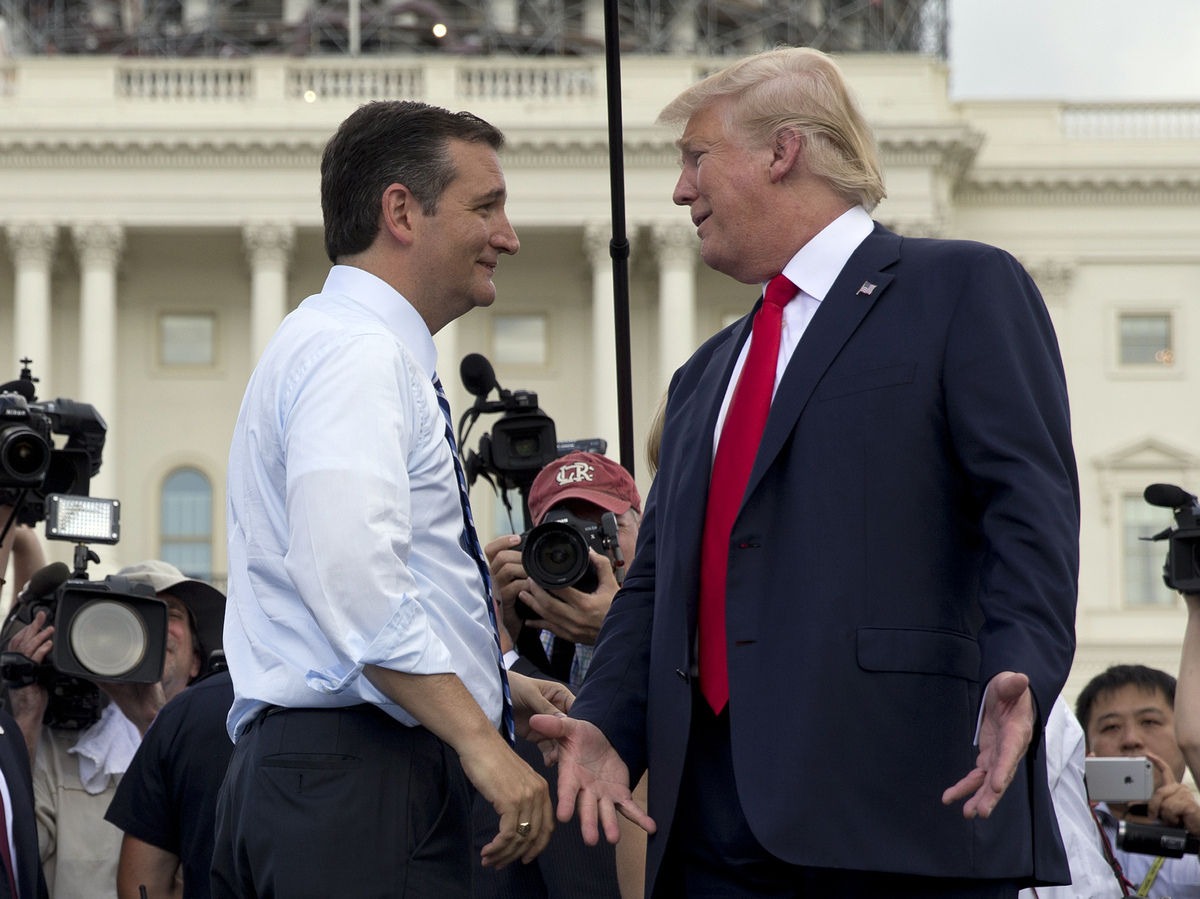 Republican presidential candidates Sen. Ted Cruz of Texas and businessman Donald Trump greet each on stage at a rally on Capitol Hill to oppose the Iran nuclear agreement.

Republican presidential candidates Donald Trump and Sen. Ted Cruz of Texas were among the speakers at a Tea Party rally Wednesday to denounce the Iran nuclear deal.

Trump, who leads the Republican presidential field in virtually all national polls, had his trademark bluntness on full display. He told the crowd of hundreds on the West Lawn of the U.S. Capitol that he has experience with negotiating, and that the United States got a bad deal with Iran.

"I've been doing deals for a long time; I've been making lots of wonderful deals, great deals. That's what I do," Trump said. "Never, ever, ever in my life have I seen any transaction so incompetently negotiated as our deal with Iran."

And just in case it wasn't clear where Trump stood, he took it one step further:

"We are led by very, very stupid people. We cannot let it continue. We are a country that owes $19 trillion. We lose everywhere, we lose militarily, we can't beat ISIS, give me a break. We can't beat anybody."

Sen. Cruz, who is thought to be trying to court Trump supporters, got in on the bash-fest against the deal with Iran.

He told the crowd that if the deal goes through, the Obama administration will become the "world's leading financier of radical Islamic terrorism" and that jihadists will use those funds to murder Americans, Israelis and Europeans.

Cruz, who is middle of the pack in many GOP polls, invited Trump to the rally to give it some additional media exposure, according to The Wall Street Journal:

"The rally, originally called to pressure Congress to pass legislation blocking the Iran deal, came to be seen as a largely symbolic protest because President Barack Obama has secured enough support for the deal to sustain his expected veto of legislation. But that did not deter Senate GOP leaders from opening debate on the legislation this week, nor Mr. Cruz and his allies from proceeding with the rally." 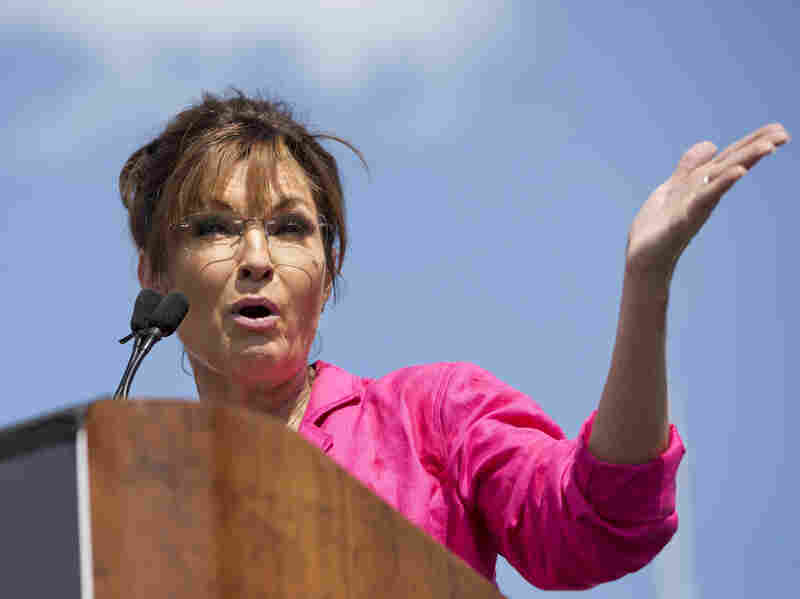 Former vice presidential Republican candidate Sarah Palin speaks during a Tea Party rally against the Iran deal on the West Lawn of the Capitol in Washington. Jacquelyn Martin/AP hide caption 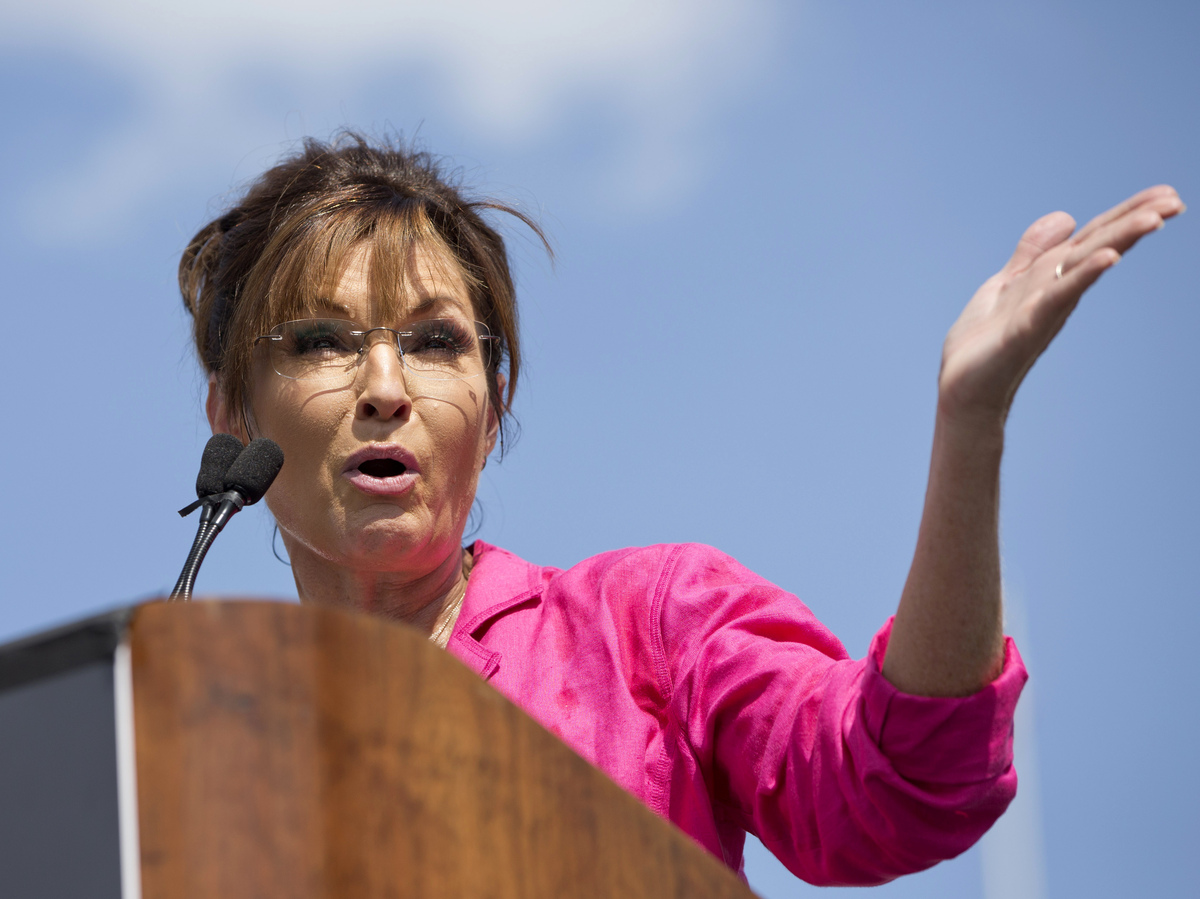 Former vice presidential Republican candidate Sarah Palin speaks during a Tea Party rally against the Iran deal on the West Lawn of the Capitol in Washington.

For his part, Cruz seemed willing to place blame for the outcome of the Iran deal equally on Senate Democrats and the two top Republicans in Congress.

"If Senate Democrats decide that party loyalty matters more than national security, and if Republican leadership decides that a show vote is more important than stopping this deal, then the single most important issue in 2016 will be stopping Iran from acquiring a nuclear weapon," Cruz said.

He added later that the next president should be ready to nullify the deal.

"Any commander-in-chief worthy of defending this nation should be prepared to stand up on Jan. 20, 2017, and rip to shreds this catastrophic deal," Cruz said.

As the crowd outside the Capitol listened to more than 50 conservative speakers, including former GOP vice presidential candidate Sarah Palin and conservative radio host Mark Levin, a different issue was bubbling up inside the building.

Several media outlets report some conservative House Republicans rebelled against party leadership, causing a delay in what were supposed to be the first votes on the Iran accord since Congress returned from the summer recess.

Politico reports the procedural vote was put off after some in the Republican caucus say the Obama administration did not disclose "what they call 'side deals' between Iran and the International Atomic Energy Agency."

"They are moving toward voting on a measure asserting Obama did not submit all elements of the agreement with Iran, a concept first raised by Reps. Mike Pompeo (R-Kan.) and Peter Roskam (R-Ill.), a former member of GOP leadership. Second, Republicans are working on a bill to try to prevent Obama from lifting sanctions against Iran. Third, the House would vote on a resolution to approve of the Iran pact. The original plan was to vote on a disapproval resolution."