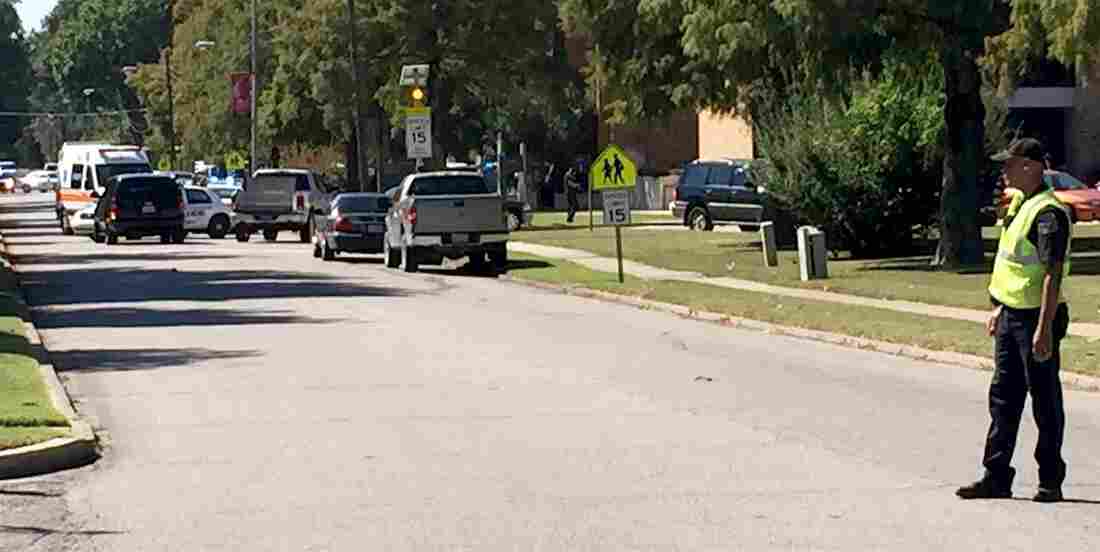 A law enforcement officer stands watch as emergency vehicles clog a road near Delta State University after an active shooter was reported in Cleveland, Miss., on Monday. One person died in the shooting and classes were cancelled. Courtney Warren/Courtesy of The Bolivar Commercial hide caption 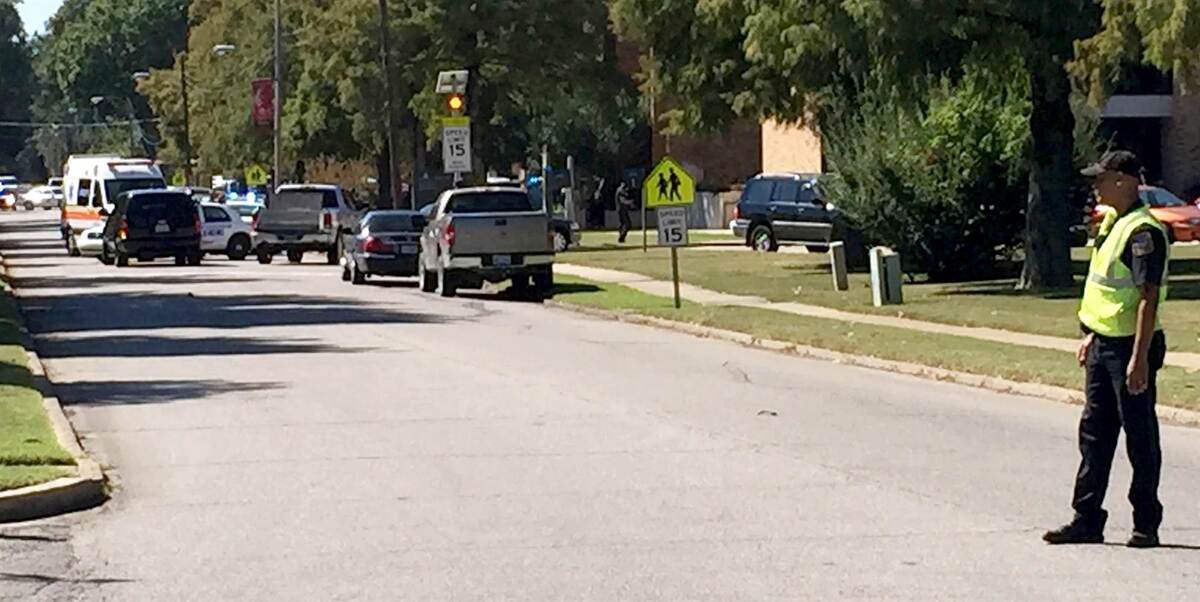 A law enforcement officer stands watch as emergency vehicles clog a road near Delta State University after an active shooter was reported in Cleveland, Miss., on Monday. One person died in the shooting and classes were cancelled.

Courtney Warren/Courtesy of The Bolivar Commercial

The suspect in the shooting deaths of two people in Mississippi has died of a self-inflicted gunshot wound following a police chase late Monday, according to authorities.

"Lamb was the chief suspect in the murder of fellow professor Ethan Schmidt, who was shot and killed in his office on the Delta State University campus in Cleveland, Miss. Lamb fled the scene of the shooting, placing the school on lockdown for much of the day as authorities combed the area looking for the suspect.

"It is also believed that Lamb was responsible for the fatal shooting of a 41-year-old woman in Gautier, Miss., with whom he may have had romantic ties. Authorities say they have yet to speculate on a motive."

The Associated Press says that police began following Lamb "after a license-plate reader picked up his plate as he headed back into Mississippi from Arkansas. Lamb then pulled over and took off on foot, as police waited for backup. They then heard a gunshot, and found Lamb with a bullet wound to the head. He was pronounced dead at a hospital."

Updated at 9:05 p.m. ET: Police In Contact With Suspect

Police say they have spoken with Shannon Lamb, the man they're searching for in connection with two deaths in Mississippi.

"Lt. Scott Wilson and another officer whose name was not given said during a news conference Monday in Gautier ... urged extreme caution in dealing with him. The unidentified officer said Lamb told police "he's not going to jail." They would not say when or how they spoke to Lamb. The news conference was broadcast on WLOX.

"Police have identified Lamb as a suspect in the shooting deaths of a woman he was living with in Gautier and a teacher he worked with at Delta State University in Cleveland.

"A manhunt is now under way for Lamb."

Shannon Lamb, suspected in the shooting death of Delta State University professor Ethan Schmidt, is also a suspect in the killing of a woman in Gautier, Miss.

"Gautier police have identified the Gautier victim as Amy Prentiss, 41, and they said the two lived together at the home.

"Police also said they've been in contact with Lamb and advised other law enforcement agencies to 'use extreme caution' when contact him because Lamb has made statements that he will not go to jail."

Police in Cleveland, Miss., have identified a "person of interest" in a shooting at Delta State University on Monday, which forced the school into lockdown and left a history professor dead.

Speaking at a news conference, Cleveland Police Chief Charles Bingham named Shannon Lamb, an employee at Delta State, in connection with an investigation. According to the university's website, Lamb is an instructor of geography and social science education.

The victim, identified as Ethan Schmidt, was found dead in his office when authorities arrived on the scene, according to Bingham.

"At this time we don't think [Lamb is] on campus, but we're not taking anything lightly," Bingham said.

"We're at the process stage now. We went into lockdown. We made sure that the students, faculty, staff and administration were safe," he said. "And at this time we are methodically going building to building to get the students out and let them leave and go home safely."

Campus remains under lockdown. Please do not leave the building. Stay away from windows. More information will be sent out as available.

Delta State University has confirmed one fatality. Campus remains under lockdown. Please stay inside and away from windows.

SCHOOLCAST: An active shooter has been spotted on campus near Jobe Hall. Please take immediate lock down action.

Bingham said no students were injured. He did not provide any details on how the person of interest and the victim might be connected. However, Bingham did say that police had some information that Lamb could be linked to another homicide in Gautier, Miss, some 300 miles south of Cleveland.

The campus remains in lockdown and there are hundreds of officers from around the state, according to the university's Twitter feed. Classes are canceled the rest of the day and tonight.

Earlier in the day the school issued emergency alerts that people should take shelter and stay away from windows.

"Shortly before 11 a.m., campus officials issued an alert saying an active shooter was seen in the vicinity of the school's history department.

"Rolando Herts is a professor whose office is located across the street from where the shooting took place.

" 'I think everyone is reflective right now, thinking how can this happen here? We're in shock. This is not the place, Cleveland, Mississippi, Delta State University, where you would think something like this could happen.' "

Gov. Phil Bryant "was in communication with [University] President LaForge and with Department of Public Safety Commissioner Albert Santa Cruz. The governor has offered the full support and assistance of DPS, including the Mississippi Bureau of Investigation and the Mississippi Highway Patrol,' a police spokeswoman was quoted by The Clarion-Ledger as saying.

Delta State is a four-year, public university with an enrollment of more than 4,000 students, according to its website. The city of Cleveland is located near the Arkansas-Mississippi line, about 125 miles north of Jackson, Miss.