Accessibility links
3 Astronauts Walk Into NPR ... : The Two-Way The women plus NASA's chief scientist came to talk space exploration, women in STEM, and common misconceptions. Oh, and which foods they wished they had in space. 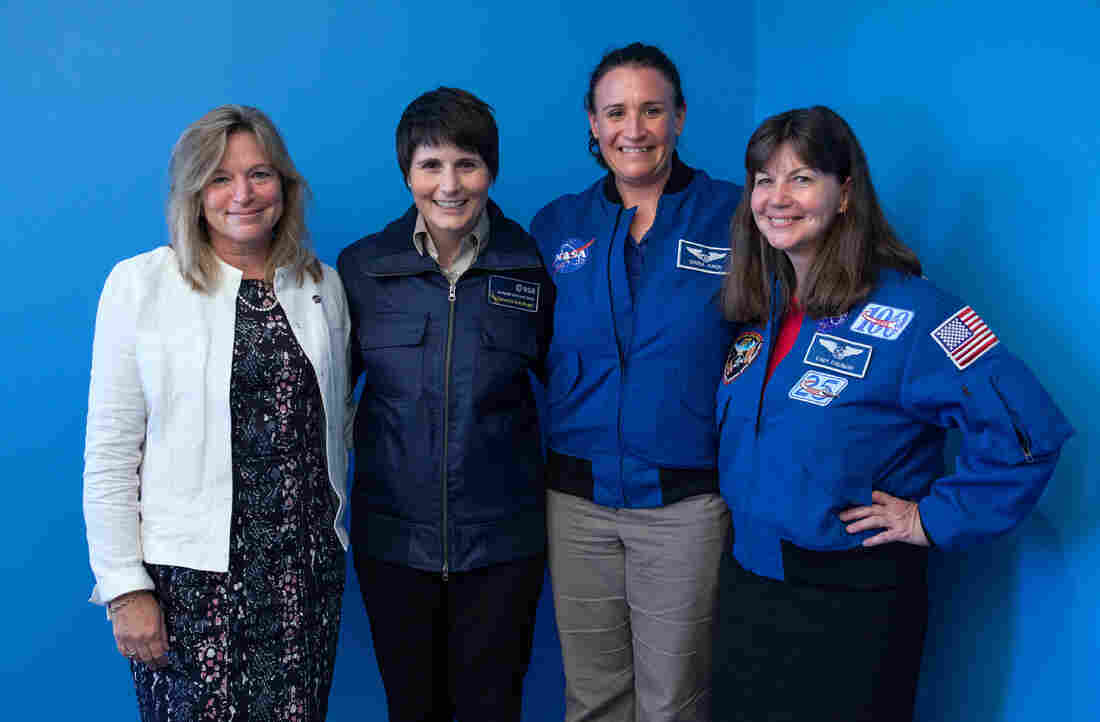 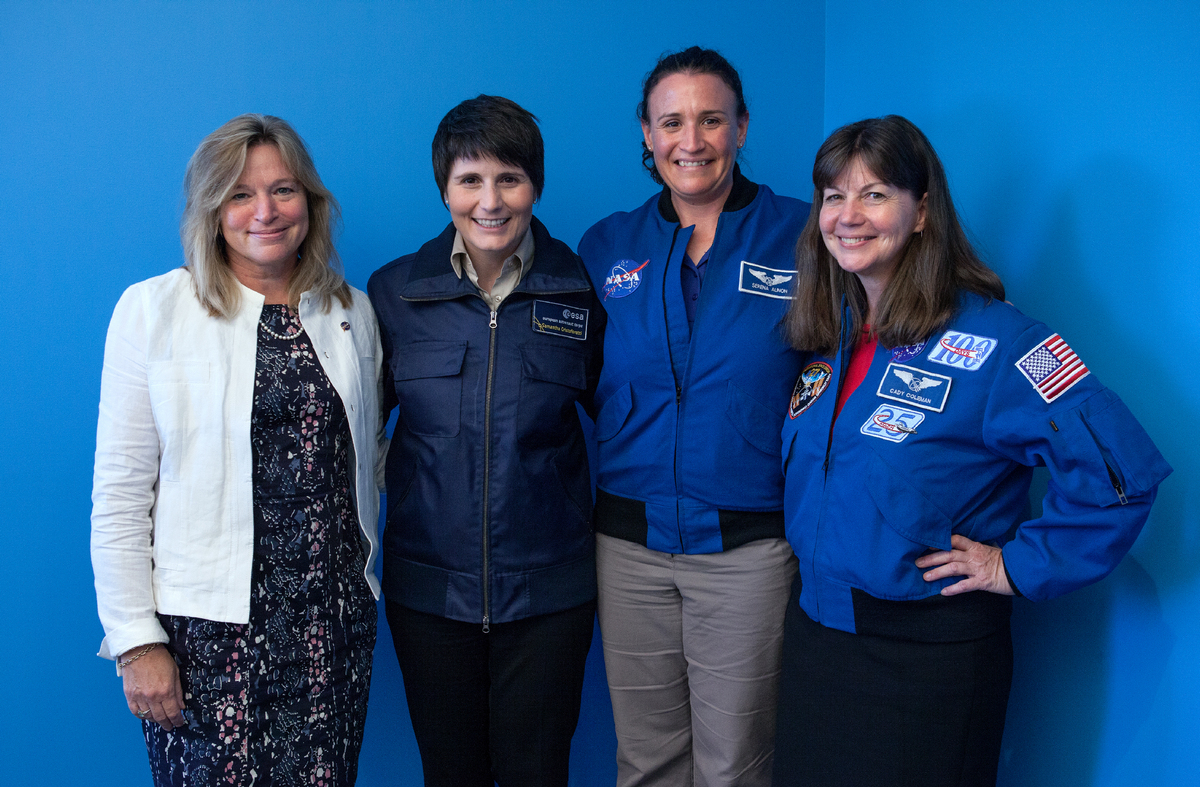 NASA astronauts Cady Coleman and Serena Auñón, European Space Agency astronaut Samantha Cristoforetti and NASA Chief Scientist Ellen Stofan came to NPR headquarters in Washington, D.C., Tuesday to talk with NPR's Adam Cole about space exploration, women in STEM, and common misconceptions. They also discussed what it was like to dream in space, the difficulties of coming back down to Earth, their favorite space movies and the most exciting planets in the solar system. Oh, and which foods they wished they had in space.

Using #NPRSpaceJam, people from around the world posed questions to the four space experts, which they answered live on Periscope and Snapchat. If you missed it, here are the highlights:

On what it feels like to be in space

Samantha Cristoforetti: I felt instantly at home in space. Visually, we understand the main thing about being in space is that you're weightless. And that's also sensationwise what you feel the most, of course. I loved it from the beginning. ... Of course, I was very clumsy, I couldn't move around elegantly — that came several weeks later, but I felt fine. I felt great. I enjoyed so much that feeling of being light, of being able to own that space in the three dimensions. Especially for the first weeks or even months, I just enjoyed going to eat on the ceiling or hanging out on the wall.

On being women in science, technology, engineering and mathematics (STEM)

Ellen Stofan: We figured out that diverse teams do better than single-sex teams. When you bring the power of different people from different backgrounds, different sexes, different races together you're going to solve ... problems much more quickly and much better.

Serena Auñón: When my class came in in 2009, we were 30 percent women, and the 2013 class was 50 percent women. We all walked in the door and that didn't even cross our mind.

Cady Coleman: I've been there a little longer and I think there's a balance between what you decide you're going to change and how you can change it. Spacewalking in the suit, it's particularly large and bulky, and I'd say that's the place where, at least for me, being in shape is important in terms of ability and confidence. I wouldn't always get invited to the spacesuit meetings. Guys of equal size or just a little bigger would get invited, so I would just show up and say, 'Oh you must have forgotten to invite me.' ... It used to surprise them that I had the spacesuit capability and I'm very proud to be qualified in a spacesuit. There's ways to change things, just by showing up and doing your job.

On coming back to Earth after space travel

Cristoforetti: Coming back, that's a little bit tougher. Like, gosh, gravity is a big mistake. What felt the heaviest were my legs because you have to walk all the time. ... You come back to Earth and even simply walking feels so heavy because the legs feel like they're a ton.

Coleman: And you drop things.

Cristoforetti: It happened a few hours after landing, my flight surgeon lent me her phone to make a phone call and she was a few meters in front of me and so I remember stretching out my arm and I was going to let that phone go and give it a push like you do in the space station and I caught myself in the last nanosecond, no, don't do that.

On the best pieces of space fiction

Coleman: I actually loved the Gravity movie. ... There's a lot of things that are in terms in physics inaccurate, but to me it's about where they take you. The fact that I regret very much I can't take all the people that I love with me. And I think that that movie not only gives them the view but the feeling of having the view. Now I'm looking forward to seeing The Martian.

On dreaming in space

Coleman: I definitely dreamed weightless. You'd be going somewhere in the space station, it was really natural. And then I would dream that way when I got home.

On the most surprising planets in space

Stofan: The fact that there was water once on Mars is not surprising; we've known that for a very long time. But our Curiosity rover has told us that water was stable on the surface for about a billion years. We're really excited about that because that's enough time, we think, to make it likely that life evolved on the planet. ... It's the place that we can send humans to go and hopefully find evidence that there is life beyond the Earth.

[But] if you're ever interested in sailing on an alien sea, Titan would be the place to go. Titan is a moon of Saturn. It rains but the rain there is not water. It's liquid methane and ethane, so basically liquid gasoline. That's because it's so cold out of the orbit of Saturn. There are seas; you could send a boat there someday and float on them and figure out what they're made of and if — by a small chance — anything is actually living in those seas.

On common misconceptions about space

Coleman: People think we're in this really cramped space, which is actually true for launching and for landing — it's very small it's like being in the front seat of a smart car with three people — but up on the station itself, it's like 10 train cars or large school buses put together at different angles, without the seats in them, so its actually quite big and you can have a lot of personal space.

Stofan: I think people aren't aware of how close we are to answering the question: "Are we alone?" From Mars that I was talking about earlier to Europa, one of the moons of Jupiter, to every day now it seems like we're finding a planet around another star that seems to be about the same size as the Earth and maybe is about the right distance from the star to have water stable on its surface. So, I think we're really close, certainly within a generation, to answering the question of are we alone in the universe.

Foods they wished they had in space

Cristoforetti: My biggest craving was a big salad with a lot of fresh tomatoes, mozzarella and nuts.

Auñón: One day I hope they're able to get warm oatmeal chocolate chip cookies up there. That would be awesome.

Coleman: I missed things that were crunchy. Things like potato chips would get smushed and then they'd be just crumbs and would be impossible to eat. You'd have a cloud of potato chips.

And if you're wondering, did Samantha eat any of NASA's space lettuce on her most recent trip to the Space Station?

Cristoforetti: I missed it; I had just left. ... No salad; they didn't allow us to eat their samples.

A previous version of this story misspelled Samantha Cristoforetti's last name as Christforetti.