Accessibility links
Please Don't Have A Temper Tantrum About The Pleonasm In This Headline : The Two-Way Does it grate on your ears if you're offered a "free gift?" Would you have a "sudden impulse" to correct that grammar? Pleonasms have unnecessary, superfluous words. Tell us about the ones you hear. 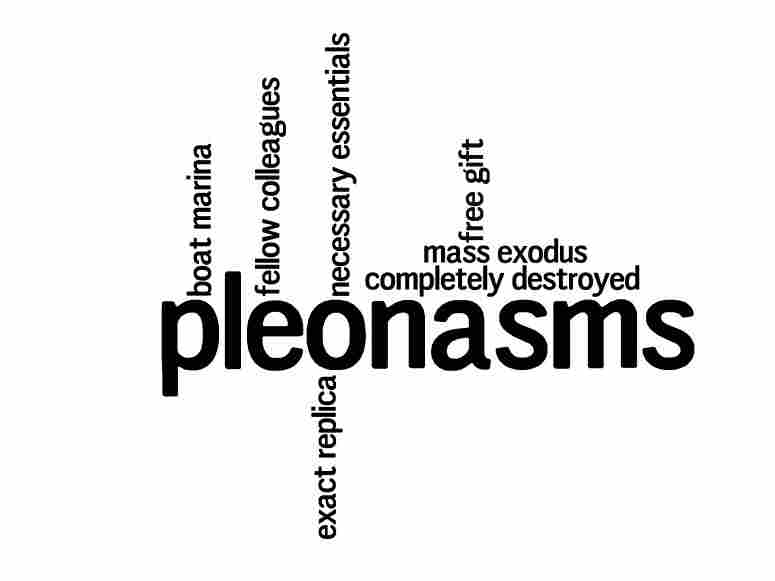 Essentials are necessary. Replicas are exact. An exodus is a mass movement of people. These are just a few of the many pleonasms heard and written each day. NPR via wordle.net hide caption 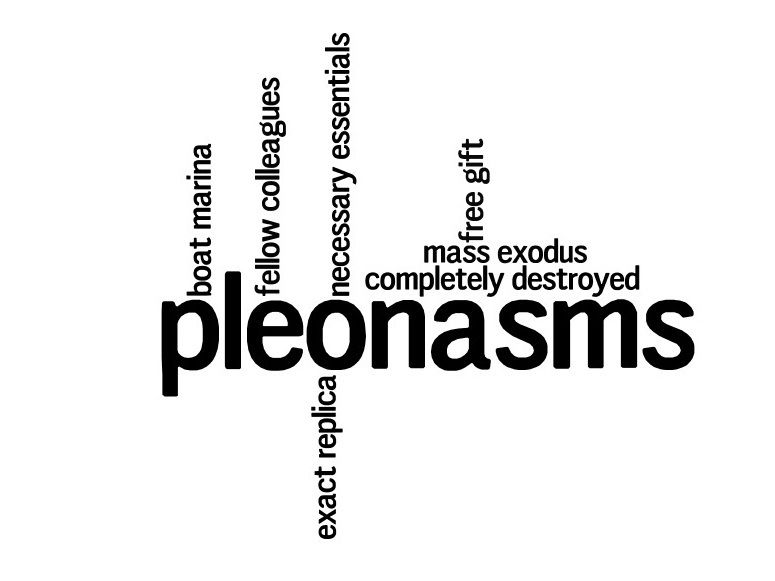 Essentials are necessary. Replicas are exact. An exodus is a mass movement of people. These are just a few of the many pleonasms heard and written each day.

There's been a "mass exodus of Syrians," one of NPR.org's headlines declared earlier this month.

President Obama said in August that the U.S. should boost domestic energy production and rely less on "foreign imports."

A state lawmaker in Illinois had a "temper tantrum," The Two-Way wrote in 2012.

Those are pleonasms — instances where there's a word or two more than necessary. A pleonasm is a type of redundancy, though not one in which the words mean exactly or nearly the same thing.

Take "mass exodus." According to Webster's New World College Dictionary, the word "exodus" means "a going out or forth, esp. in a large group." So there's no need to add "mass."

Imports are by definition from other nations, so "foreign" is unnecessary.

Webster's says a "tantrum" is a "childish fit of bad temper."

John McIntyre of The Baltimore Sun is one of the most respected copy editors in the nation. He has written about pleonasms on his You Don't Say language blog. McIntyre acknowledges that "pleonasms can constitute repetitions for deliberate effect, as in William Faulkner's Nobel speech about the 'old verities and truths of the heart.' "

It would also seem to be far above this blogger's station to criticize William Shakespeare for deeming Brutus' stabbing of Caesar the "most unkindest cut of all." We'll assume Shakespeare put that "most" there for a reason.

But as McIntyre has written, while pleonasms may occasionally have their place, "they are most commonly errors."

They also take up room, and at NPR and other news organizations where reporters and editors have to fit information into sometimes tight time and space constraints, it's important to eliminate unnecessary words.