Accessibility links
What To Watch For In This Year's Emmys Race (And Why It's Important) : The Two-Way The biggest honors in television will be handed out Sunday night. This year's ceremony comes at a turning point for the awards and the TV industry in general. 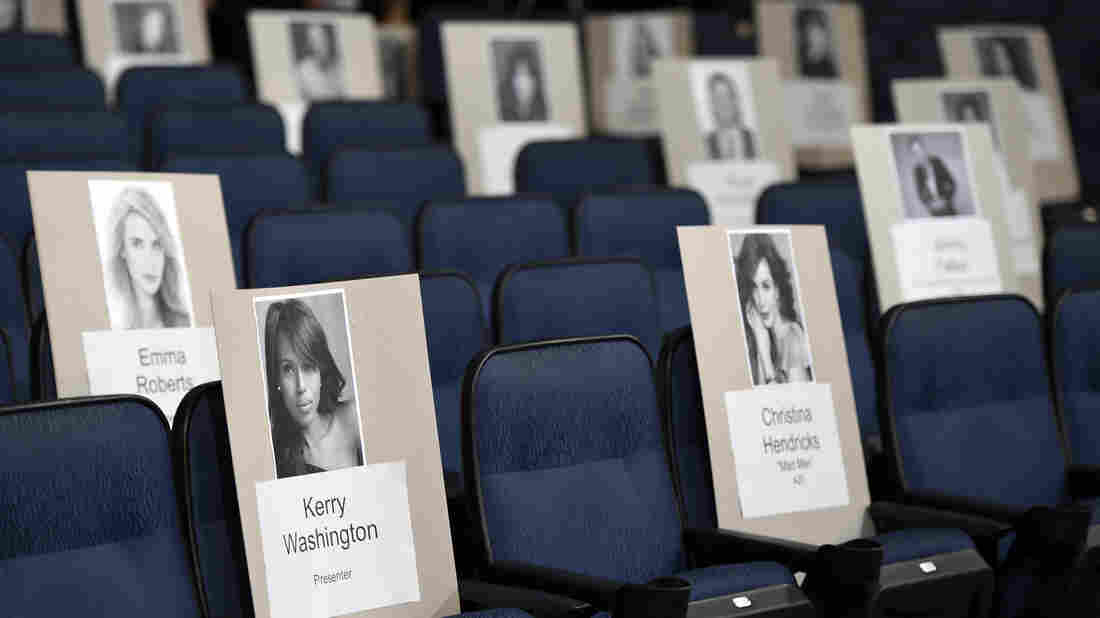 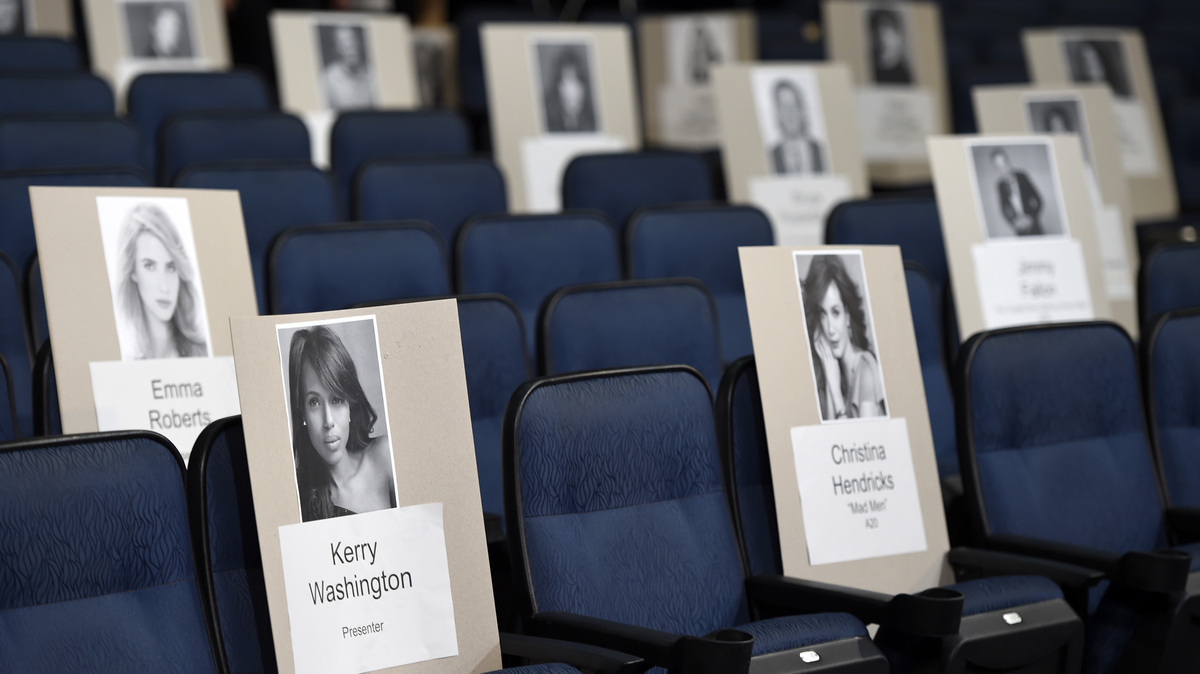 Placards determining where Emmy Awards guests will be seated in Microsoft Theatre are pictured during the 67th Emmy Awards Press Preview Day on Wednesday in Los Angeles.

In a year when more than 400 series will air on various television-like platforms, why should anyone still care about Sunday night's Emmy Awards?

The short answer: It's still the biggest honor in TV, handed out by the very people who make all the stuff we're watching on our smartphones, tablets, laptops and big-screen monitors.

And it can be a pretty interesting barometer of what's hot and what's coming next in the TV industry — if you know what to watch for. (We'll also be live-tweeting reaction to the Emmycast as it happens at 8 p.m. ET under the hashtag #NPREmmy. So feel free to join in.)

The competition just got more interesting thanks to the Academy of Television Arts & Sciences, which tweaked its rules to let in fresh blood — going to seven slots from six for best drama and best comedy series nominees, while separating sketch comedy shows from variety/talk programs to give the Portlandias and Key & Peeles of the world a fighting chance.

And this year, for the first time, all 20,000-plus members of the Emmy academy are allowed to vote on the winners and not just on the nominees. (In the past, blue-ribbon juries of select members chose the winners after the general membership voted to pick who got nominated.)

So this awards ceremony comes at a turning point for the awards and the TV industry in general. Will the Emmys acknowledge the wide vista of television shows operating outside the world of cable and broadcast networks? Or will they continue their clubby recognition of the same old performers who seem the land in the winners' circle time and again?

Here's a short list of the big issues to watch for in this year's Emmys contest and why they're so important to the future of television.

Modern Family vs. Transparent? The competition for Outstanding Comedy Series offers the starkest choice between new and old media in Emmyland. ABC's comedy Modern Family is the clubbiest of Emmy insiders, winning this category the past five years in a row. A win on Sunday would put it in the record books, but Amazon's zeitgeist-grabbing hit Transparent is poised to play spoiler. If the streaming service's dramedy about a gender-transitioning senior citizen wins out, the Emmy academy will have further pushed the broadcast networks out of the spotlight. Of course, HBO's Veep could win this category and make it all a moot point.

Viola, Taraji or Tatiana? The nominees for Outstanding Lead Actress in a Drama Series give Emmy another chance to make history. Nominations for two black women — How to Get Away with Murder's Viola Davis and Empire's Taraji P. Henson, are a first. If one of them wins, that would also be a first — basically because black women haven't had many starring roles in TV dramas until recently. But Orphan Black star Tatiana Maslany is the upstart favorite for playing multiple roles as different clones, while Homeland's Clare Danes and House of Cards' Robin Wright are the old-school TV industry faves. A divided vote among those who want to make diversity history at the Emmys could hand the award to a Hollywood favorite by default.

Amy Schumer or Julia Louis-Dreyfus? In the race for best lead actress in a comedy, there's another choice between an Emmy favorite and the face of new TV. Louis-Dreyfus' work on HBO's excellent Veep has already earned her three Emmy awards (she has five total wins), while Schumer earned her first nomination as a performer this year for Comedy Central's Inside Amy Schumer. A win for Schumer would acknowledge a rising comedy talent from the exploding world of cable TV sketch comedy series, but it's tough to top someone as capable and widely liked as Louis-Dreyfus.

David Letterman, Jon Stewart, Stephen Colbert or John Oliver? The Outstanding Variety Talk Series category may have more competition than any other race. Letterman is nominated for his final year as host of CBS' Late Show with David Letterman, capping a 33-year career in late-night television. But he's up against Jon Stewart, who left his job as America's satirist-in-chief hosting Comedy Central's The Daily Show with Jon Stewart in August. And Colbert is nominated for The Colbert Report, which he left in December to succeed Letterman on the Late Show. (Whew!) But Oliver has created arguably the most unique new offering in late-night talk, turning his HBO series Last Week Tonight with John Oliver into a venue for extended, informative treatises on complex problems that often feature original reporting. Here, the weight of TV talk show legacy may well beat the upstart newcomer.

Jon Hamm and Mad Men vs. everyone else. It's an astounding number — Mad Men star Hamm has been nominated for an Emmy 15 times for his work on that show and as a guest star on other people's shows. But he hasn't won once. Likewise, even though Mad Men has won Emmys as best drama series four times, no actor from the show has ever won. So this year's Emmy is the last time for the academy to honor the actors from a show widely regarded as one of the best dramas in television history.